Over the past few years interesting phenomena has been occurring in the United States as well as Canada. Consumers continue to text each other (called Person-to-Person or P2P); however, unlike in many other regions such as Asia-Pacific and Europe, they continue to use SMS at rates not enjoyed in these other regions for several years.
Yes, there is substantial usage of WhatsApp, WeChat, Facebook Messenger, and Snapchat in this region; however, for “normal” P2P conversations, consumers continue to leverage their default messaging apps on their devices.
North American SMS has only declined slightly in the past 34 months (from Jan 2014 – Oct 2016).  As the graphic shows, over the last, almost 3 years, North American traffic is relatively flat, showing a marginal decline with a CAGR of just –0.128%:

Why is this so?  We can cite a few reasons:

The US market has also continued to evolve.  Now US subscribers pay very little for SMS – many times with “unlimited texting” bundles as part of a data plan purchase or a greatly reduced prices for unlimited SMS.
The biggest decline to US and Canadian volumes occurred in 2012 and into 2013, after iMessage was released.  That cost the volumes about 20% from their peak in Q4 2011.  Since 2012/2013, the overall messaging traffic has dropped only slightly.  In fact, it actually rose slightly in 2015.  Much of this had to do with the ebb and flow of Android vs. iOS market share. Today, SMS is used in two of the three primary cross-platform scenarios:

When iOS is strong, we see a more pronounced decline as there is more iMessage to iMessage traffic (not using SMS) verses, as when Android has a higher market share – SMS based texting prevails.  This accounted for the actual 2015 rise in SMS volumes. As of September 2016, comScore indicated that Android had a 54.7% market share vs. 42.8% for iOS with iOS down 0.5% from June 2016.
What worked and continues to work for the mobile operators?

That said, North American subscribers are heavy users of Facebook Messenger, Snapchat, and yes, WhatsApp, WeChat (especially popular among Asian-communities) as well as many others.  But, somehow, that usage doesn’t displace mobile consumers’ usage of their devices default texting apps.
Anecdotal evidence of the continuous usage of SMS could be seen in the early morning hours, immediately after the 2016 US Presidential election. As it became clear that Donald Trump would defeat Hillary Clinton, US SMS volumes surged over 100% of normal volumes, as subscribers texted and discussed the news. 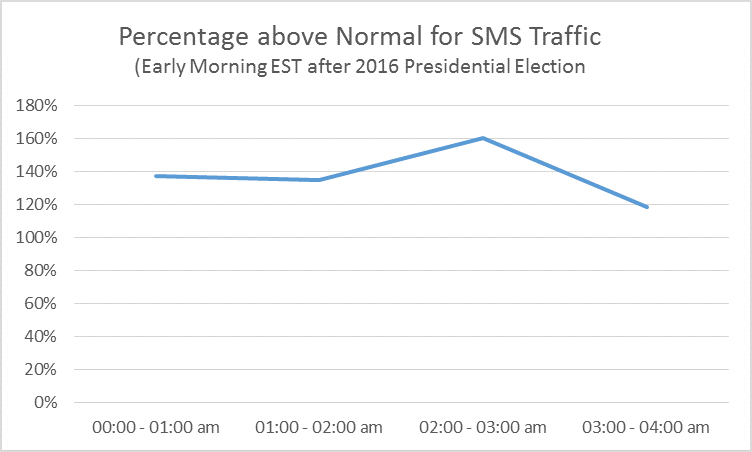 Going forward, we still expect Person-to-Person texting to continue its slow decline in this market, but nothing radial is expected.  However, SMS-based enterprise (or A2P) messaging is forecast to surge, well into the 2020’s.  It is easy, still inexpensive, and options for business deployment will increase.   There will be other channels, but expect to see SMS-based chatbots; “Call or Text” for customer service (including text-enabled toll-free numbers), more SMS-based 2FA, more SMS-based notifications and marketing campaigns.