Global metals and mining companies are increasingly moving towards cloud-based data storage to complement mobile devices that provide employees with instantaneous access to that data. The Internet of Things (IoT) is the digital ribbon that ties together key operational and business data to improve real-time access and decisions that can increase efficiency and therefore profitability.

Germany-based SAP SE, one of the worldwide leaders in the advocacy and application of IoT strategies for metals and mining companies, points to four key areas of applicability in the metals industries:

• Connected Logistics to track and manage vehicles by reducing downtime and saving on fuel and maintenance costs.

“There is a lot that you can do with data beyond the current applications in metals and mining companies,” according to Stefan Koch, global lead for metals for SAP. “You can look beyond your own fence and start to capture and use other data points for the benefit of your business. We see applications for securing customer intimacy such as buying habits so your business can anticipate their needs before they do.”

Crowe Horwath LLP’s Raj Chaudhary, risk consulting principal, also sees similar applications of IoT in industrial settings. “Asset management always provides a challenge, and IoT can help better manage equipment and logistics. There are also benefits for the operations and business management sides of the enterprise in quickly transmitting predictive data to avoid maintenance shutdowns and continue running 24/7. Real-time maintenance-related data can be collected and analyzed to predict downtime before it occurs.”

Through its enterprise resource planning (ERP) systems, Global Shop Solutions, The Woodlands, Texas, helps its clients increase their visibility to data to manage labor costs and track sales and executive management functions. “Clients are able to check inventory on hand and see what has been shipped to their customers and the purchase history of those customers for the past two years,” Mike Melzer, vice president of service and operations, said. “As we start hosting our ERP in the cloud, there will be even greater accessibility of data anytime from anywhere. That accessibility is even more important for a firm with multiple locations as a company continues to grow from its original site. The first generation of a firm tends to focus on mastering its product, where the subsequent generations tend to bring in other areas of expertise to grow the firm. Information technology has a role in that growth. Global Shop’s Adam Grabowski, director of marketing, added: “We are able to connect facilities, people and customers at the same time showing them data in real time.”

PricewaterhouseCoopers’ (PwC) Mike Tomera, metals leader for the United States, points to the application of data gathering through IoT as a means to improve safety and quality performance in metals companies. “For quality, sensors and gauges help catch errors in process and not just at the end of a production process. The real-time information gathered through IoT and companion mill equipment allows for in-process adjustments vs. corrective actions at the end. Likewise, safety performance can be improved by capturing real-time data to avoid costly breakdowns and equipment failures that can and do hurt people.”

Technology providers can and will play a significant role in the growth of IoT by providing products with embedded technologies. “Like automobiles that track driving habits, mining machinery is being equipped with sensors to help avoid costly downtime. It is a trend that is just beginning and will accelerate and move to other types of industrial machinery as well,” according to Crowe Horwath’s Chaudhary. The sensors and gauges cited by PwC’s Tomera will only proliferate into other industrial equipment as time moves forward. SAP’s Koch believes that “if you can control a car or a truck, you should be able to control an industrial machine.”

Gathering data is only one part of the puzzle, according to PwC’s Tomera. “The next step is understanding what the data is telling you. Industrial companies including metals companies need shop-floor workers who can interpret the data and act accordingly. This is the next generation of industrial jobs. The challenge will be to find employees with science, math and technology backgrounds who know what to do with the data.”

Future applications of IoT, according to Koch, could include embracing the concept of a circular economy “which is particularly relevant for steel as a highly recyclable material. In some regions, there already is enough steel in circulation that, if recycled at the end of the product’s useful life, the scrap could be melted and recast for another end product like an automobile or piece of metal furniture. That steel product’s life cycle could be managed through IoT and could reduce the need for steelmaking raw materials, and scrap derived from urban mining could be used instead.”

Koch also believes that metals companies would not necessarily have to produce their own products but could manage the production chain through IoT by using other companies’ production assets. “Much in the same way that Uber doesn’t own any vehicles and Airbnb doesn’t own any hotel rooms, you can have a metals company that sells its own brand of material but lets others handle the production by managing the process through the connectivity of IoT,” Koch said.

Global Shop’s Melzer sees increased connectivity “whereby more data is pushed up so you can track your company’s heartbeat. We have a client based in Dallas with a facility in China who when he rolls out of bed each morning immediately checks on key production for the Chinese location. Everyone using the same data at the same time on mobile devices means you can constantly see what is going on within your company, including in remote locations.” His coworker Grabowski added, “As people become more comfortable with data, systems can be used more effectively to make decisions and present options that improve the business on an instantaneous basis.”

But despite the advantages of connectivity through IoT, there are barriers to entry. Some of those barriers are monetary. “The current environment in metals is not great with fairly low utilization rates. Producers are being prudent with capital expenditures. Being prudent is understandable, but if a company is not looking to adopt IoT technology, it could be on the outside looking in,” PwC’s Tomera said.

Crowe Horwath’s Chaudhary understands that there is “fear of failure” by metals companies during today’s harsh economic environment. “The cost of change is significant, particularly when adopting new technologies that mandate updating an existing IT infrastructure. But by upgrading IT systems you can guard against a security breach, the cost of which could be huge.”

Jared Hamilton, Crowe Horwath’s risk consulting senior manager, couldn’t agree more, particularly in view of utilizing IoT across the entire steel supply chain. “However, you first must put your own house in order. Then you have to look at the risk and controls for any and all companies with which you will be doing business. This includes the vetting of all suppliers to make sure that they have proper security controls as well. Old technology can be difficult if not impossible to secure, and it is hard to have a secure environment with a hybrid of old and new technologies. It can be expensive but the technology is evolving, and new technologies can be most readily secured. Recent distributed denial of service attacks (DDOS) can become more prevalent with the expansion of IoT. The influx of new IoT devices that were quickly pushed to the market can be compromised into hacker-controlled botnets and then utilized to launch the DDOS attacks. For metals companies with lots of devices, you need good cyber-security measures around them to protect yourselves, as well as prevent your IoT devices from contributing to the DDOS problem.”

Some barriers to entry of a more vibrant and connected digital world can be cultural if not psychological. By integrating with the outside supply chain through IoT, “some companies may fear that they are losing control of their secret knowledge,” SAP’s Koch said. “We have seen some of the ‘we’ve always done it this way’ behavior by steel companies that can resist change. Some of that mindset may be driven by the belief that their company’s knowledge is not to be shared with others.” Crowe Horwath’s Hamilton said that many companies view their operational technologies as proprietary “and don’t want their competition to get their advantage of how they go to market, which makes the need for adequate cyber-security measures even more important.” Global Soft Solutions’ Melzer said that it is “sometimes easier to spend money on machines they can see vs. software and technology they can’t.”

How are North American metals companies stacking up on the adoption and integration of IoT compared with other continents? That depends on whom you ask. However, there are some variances in IoT approaches that are in part rooted in cultural differences. “For example, the United States is often more open to using mobile devices generally. Some countries with an historical engineering bias like Germany and Italy tend to put more emphasis on the technical aspects of IoT. And some parts of Asia such as Japan and South Korea are driven more by perfection than speed to market.” Crowe Horwath’s Chaudhary believes North America is “in the middle of the world for its sophistication of IoT. Asia is the biggest investor because operating costs, particularly in China, are lower.” PwC’s Tomera states that it is “hard to paint a broad brush on a country-by-country basis, although we believe Asia is further ahead” of other nations’ adoption of IoT. Global Shops Solutions’ Melzer sees a return of jobs to North America that had moved overseas because of increases in “the automation of work. North American jobs left for cheaper labor but, because of the increased output through automation here, they are beginning to return. The United States and Europe are ahead of other areas in the world in the effective implementation of automation.”

“For the next five years,” according to PwC’s Tomera, metals companies in North America have to invest in information technology as their largest percentage of capital expenditures. IT has to be above plant and equipment. The industry here, I believe, is a little behind the curve, and it has to catch up.”

Want to hear more about IoT and Digital Transformation in Metals? Join the webinar December 6th.

Hear from CIO, Yuri Shekhovstov how Severstal is redefining itself to capture the next generation metals business. 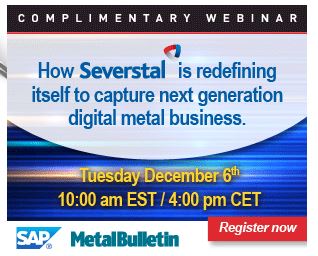