Right. Enough introduction. Let’s get on with it.

Apologies to Support Consultants & HANA to the Rescue An existing solution that worked properly – assumption was apparently valid – was enhanced with an additional field for which the assumption was not always valid. Subtle issues like this are usually not found during testing, but are noticed after go-live. This is a typical example of the type of data integrity issues found all through a traditional data warehouse. Fixing the data issue involves carrying out some full loads instead of delta loads.

And this is where HANA technology can come to the rescue. In a traditional database, one would think twice before carrying out a data load involving millions of records in full mode on a daily basis. With the speed of HANA technology this becomes an option seriously to be considered. Below a solution quite successful in practice, i.e. a “self-update in full mode”. All lookup actions are carried out in a transformation from a DSO to itself in full mode. 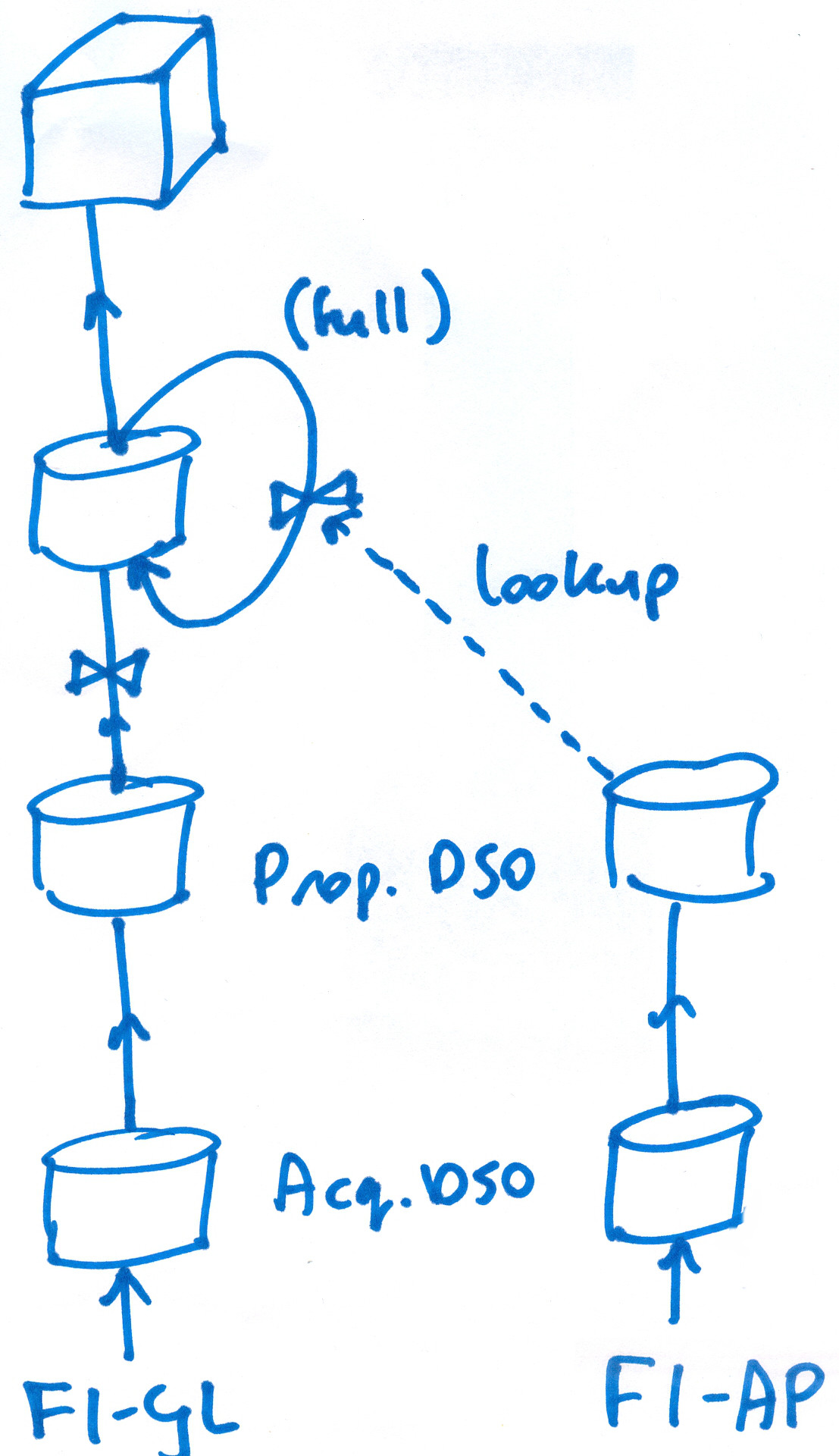 No delta-trigger is required to pick up new values. Preferably, the self-update transformation is kept “ABAP-free” for optimal performance. Application of the “self-update in full mode” solution for all lookup actions can and does strongly increase data integrity in a traditional data warehouse.

Below, SAP’s standard graph displaying the convergence of BW objects moving towards BW on HANA versions. Only one object for data persistency remains, i.e. the “Advanced Data Store Object” or ADSO. The Open ODS View and Composite Provider are virtual objects, which do not even require the use of InfoObjects. InfoObjects remain, but will in future probably only be used in case of complex master (hierarchies, authorizations, multi-language descriptions, …). 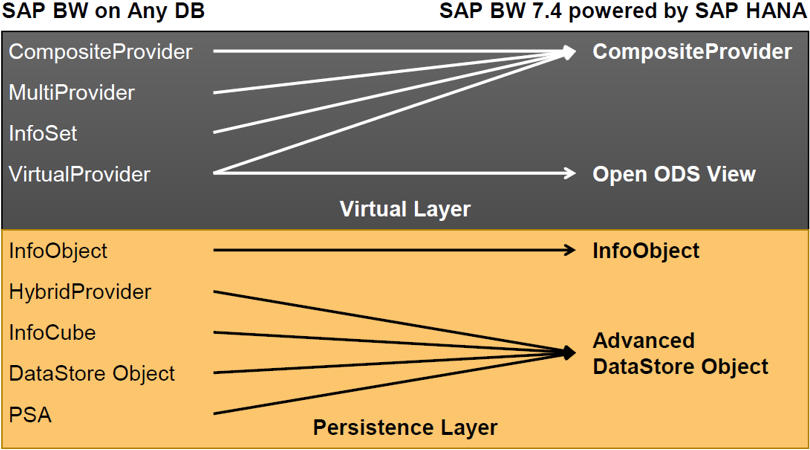 This convergence is a good thing. At first sight, it may look like functionality is disappearing, but all options existing in the separate objects on the left side appear as settings on the limited number of objects on the right side. These new objects are thereby much more flexible than the old ones. A type of object cannot be changed after creation, but a setting on an object can.

The same tendency is noticed in Native HANA objects. Attribute Views and Analytical Views are replaced by more flexibility in Calculation Views. SAP itself is using only Calculation Views in its Hana Live offering, and most customers are currently doing the same.

An even better idea was the convergence of frontend tools. The overall idea is sketched in the graph below (not the latest version, but this version most clearly demonstrates the convergence).

After takeover of Business Objects by SAP, a huge number of reporting tools was scattered all over SAP’s product portfolio confusing not only BI veterans like me, but also most customers, who decided to postpone investments in reporting tools or look outside of the SAP portfolio. It was a necessity that SAP would make a statement like “These are the frontend tools for the future. We will continue to invest in these tools.” Luckily they did, although a bit late. The strongest and most future-proof tools – Analysis Ofice, Lumira and Design Studio – were all new developments by a joint team of SAP and Business Objects developers after the takeover, and not attempts to integrate mature Business Objects products with SAP technology, which for some reason does not work well. For more details, please read the blog on this topic, which is also the source of the graph shown above: http://blogs.sap.com/analytics/2014/06/25/run-simple-convergence-of-the-sap-businessobjects-bi-product-portfolio/.

More convergence: Lumira and Design Studio are joined in next releases. On the downside: the cloud version of Lumira is recently replaced by Cloud for Analytics aka Business Objects Cloud, a new product. Are we diverging again? If not, hurray for SAP!!!

Everything in one HANA box?

In Part 1 I stated at some point that HANA technology makes it possible to put transactions and reporting back together in one box. Somewhere else I also stated that data storage is cheap. The second statement clearly is not true in case of HANA in-memory storage. Putting everything in one box may be feasible for smaller companies, but larger companies will rarely choose to do this. System architectures arising will include multiple something (servers, clients, tenants …), often to facilitate “Multi-Temperature Data Management”. See the SAP-graph below for an explanation.

The client I currently work for has a Native HANA analytics system on a database which hardly contains any data, only virtual models. The data is kept in separate Operational Data Stores, in most cases also HANA databases, connected to the analytics system via Smart Data Access. SAP source systems also run on HANA databases. SAP source system data in the Operational Data Stores is synchronized with minimal delay using System Landscape Transformation. This type of setup will be seen often in practice for larger companies. But if you want … you can put everything in one box.

There is a lot more to say regarding system architectures for Native HANA, BW on HANA and hybrid solutions. One of my colleagues is currently working on a blog on this specific topic.

Skills: from ABAP to SQL

In the (near) future, SAP BI consultants will need new skills: less ABAP and more SQL. In Native HANA, enhancements can be built with “ABAP Managed Procedures”. Don’t let the name fool you: there is no ABAP involved in this type of enhancement, only SQL. HANA operation of BW transformation is already disabled after pressing the Start/End routine button alone. Any coding involving something like “loop at datapackage” is by definition row-based and not compatible with high-speed HANA-operation. Also, frontend tools like Design Studio require more SQL expertise than before.

SQL brains are needed instead of ABAP brains. Advice: In a team of 4 SAP BI consultants, fire 1 and replace him/her by someone with traditional database skills, someone not spoiled by the fancy development shells SAP is providing. There are plenty of them around in the non-SAP world. They are usually quite cheap.

How about Historical Data?

The openSAP training series introducing S/4HANA were quite shocking for BW consultants, as BW was not mentioned once during the entire series. With disbelief we watched the lesson on “Data Footprint Reduction” by Wieland Schreiner, who for some reason wanted to shrink the database of an ERP system in such a way that it would fit in an iPhone. Why? Don’t ask me. I am not Wieland Schreiner. The first steps I could relate to: compression, column store, remove redundant tables, all fine by me. But in a “grande finale” Wieland Schreiner said, and I quote: “If we now take out of that system all that is not needed, so all historical informations …”.

There he lost me. Maybe there are organizations living so much in the moment that they are not interested in data older than, say, a year, but personally I have not encountered such organizations. This is where some sort of data persistency is required in the data integration platform: for historical data that is not kept in the source systems anymore. But also for “snapshots” or frozen states of data that are either not stored in the source systems, or only in obscure logfiles. For this purpose, a traditional data warehouse system like BW is an obvious choice, although one can think of alternatives like physical tables in the HANA database created with HANA Studio and loaded with data using Data Services. In recent presentations on BW/4HANA, SAP is positioning BW for historical data (and historical data only).

Which is an excellent bridge to the final miscellaneous topic …

BW/4HANA is the “new-objects-only” version of BW on HANA.

What is BW/4HANA? – Revisited

Well, maybe that was a bit short, although it sort of covers it. What does one do if one wants to get rid of old technology hampering future developments, like cubes and stuff? A two-step approach is required. First, one releases a version with old and new technology side-by-side. Second, one releases a version with new technology only. The side-by-side version is supported till the end of time, but all innovations are focusing on the new technology. In time, all clients will need to migrate to the new-objects-only version.

How easy will it be to migrate from BW on HANA to BW/4HANA? Let’s see what SAP itself says about it in its BW/4HANA FAQ document: “Although, SAP BW/4HANA is not a legal successor of SAP BW (based on SAP NetWeaver), a conversion path will be provided.”. Oh boy, SAP is going into “legal-mode”. Be afraid, be very afraid! Here is another quote: “Classic objects in BW-on-HANA can be semi-automatically migrated into SAP BW/4HANA compliant objects.”. Ouch. Translation: “It will hurt”. However, nothing a good implementation partner won’t be able to help you through.

Finally: Say goodbye to the good old “Business Explorer” frontend. But let’s be honest: wasn’t that about time?

Feedback from one of my colleagues on the draft version of this blog: “In parts 1 and 2 you gave your opinion a lot. In part 3 you are more ruminating SAP slides.” He may be right. Therefore, in a nutshell, my opinion on today’s topics:

This blog and the two previous ones more or less wrap up what I have to say about the topic in the title. Please contact me if you would like to cheer, disagree, complement or chat à freek.keijzer@ciber.nl.