The Cloud Application Studio does not allow asynchronous task execution. Webservice calls, Business Object updates.. everything is running in a synchronous way within an application. There is one entity, which runs in background task: Mass Data Run Objects (MDRO). My colleague Stefan Kiefer found a way to leverage MDRO functionality in a normal (non MDRO) application and kick off background tasks via ABSL script. He has built a template, which enables you to quickly leverage this functionality. The template contains an MDRO and the necessary library to schedule and execute background tasks. We call this: The Background Task Manager template.

The Background Task Manager is essentially a prebuild set of a fully developed MDRO on top of a custom business object plus libraries that can be used to schedule, execute and check the status of a scheduled task. A normal MDRO can be scheduled on an MDRO screen, which is a manual activity. This template provides libraries that allow you to do this scheduling from an ABSL script. This allows to create background tasks, set parameters and execute code right on any event when ABSL code is run.

The template contains the following entities: 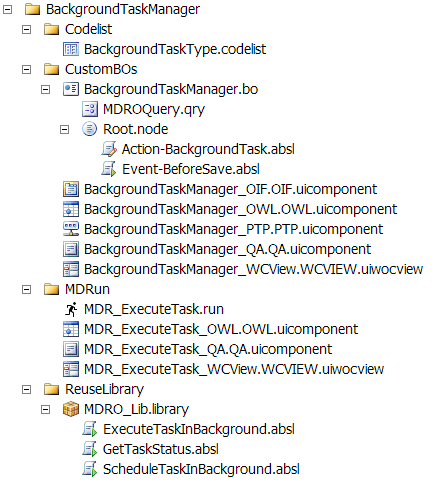 The only entities you need to change when implementing the Background Task Manager are:

Step 1: Import the template into your solution

Select the template file, which you can download at the end of this blog.

Once the import is finished, you will find the “BackgroundTaskManager” folder in your solution. 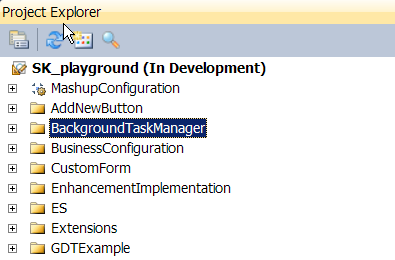 The following code will schedule and execute a Background Task. Let’s imagine you want to call a long running webservice call in the Ticket save. Then you would place this code in the ticket Event-BeforeSave.absl:

MDRO_Lib.ScheduleTaskInBackground(TaskUUID, TaskType,Parameter1:UUID,Paramenter2:GLOBAL_DateTime,Parameter3:XPEString,Parameter4:Text)
Schedule the Background task. This code actually creates an instance of BackgroundTaskManager.bo. The parameters are stored in this BO. You only need the first two, but it makes sense to give more parameters to it. At least one ID or UUID that identifies the BO you want to work on. The Background Task Manager executes the Action-BackgroundTask.absl and there you only have the information available supplied to this method. Parameter3 is reserved for an unlimted long string which will be saved in an attachment folder.

MDRO_Lib.ExecuteTaskInBackground(TaskUUID);
This executes the before defined Background Task. The UUID supplied here, must be the UUID that was used to schedule the Background Task.

The code the background job will execute is implmented in Action-BackgroundTask.absl.

In this ABSL, you have access too all information you have supplied to MDRO_Lib.ScheduleTaskInBackground(). The switch statement differentiates between the TaskTypes given, so only the Task defined in BackgroundTask.codelist and given into ScheduleTaskInBackground() is executed. Feel free to implement whatever you want in here. If you supplied the calling object UUID, you can retrieve the calling object and read more data from it.

Use case: Detach Workflow Rules from a standard object to enhance save performance

The standard process executes the save and the WF rules sequentially: 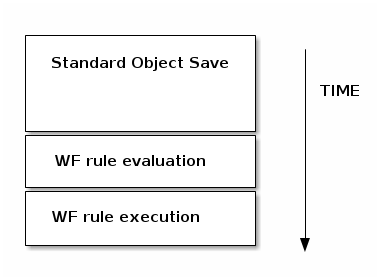 Create a background task, that reads the standard object and copies all the selection criteria field information into the custom proxy business object. Trigger the Background Task at the end of the BeforeSave event. Implement the code to copy the fields over in the Action-BackgroundTask in the BackgroundTaskManager.

Thanks for sharing the information. 🙂

Very useful, thanks for sharing!

Thanks a lot, for sharing.
i have a question:

How can I set programmatically the MDR_Task as a recurring task?

In GetTaskStatus, you forgot to pass a return parameter

I think you wanted that?:

this is not what you want to do. In this case, the MDRO is "used" to be triggered automatically from an ABSL event.

If you want to create a normal MDRO that you want to schedule, you're probably in better shape by creating a MDRO from scratch with the steps described in the documentation.

But to answer your question, you can schedule the MDRO from the frontend. But you need to make the screens visible by creating WorkcenterViews and assign them to a Workcenter and to your user.

thank you very much.

there is no limitation of background tasks. You can get the status, but you also have to set it yourself in the Action-BackgroundTask. Otherwise you will always get "not startet".

Awesome !! Thank you so much Stefan Hagen for sharing this and many thanks to Stefan Kiefer for creating this 🙂 .

Many thanks for your great sharing, it's very useful to build a central task manager with high-custom-demand purpose.

Once a task is scheduled, it's automatically activated. There is no manual activation necessary.

You are very generous to share your experience，but I cant't download the template file,can you send it to my mail box:baoxiang.lv@infosysconsulting.com

Thans in advance and looking forward to your reply!

The link should work again.

Thanks very much ,you are so kindly

This seems to be a very, very useful tool, appreciate your engagement.

Unfortunately, the link doesn't work. Would you please be so kind to share it again?

The link should work again.

Unfortunately, I had to realize that the Template is built for C4C and cannot be uploaded to a ByD tenant.

Is there a way to convert the Solution Template to make it work on a ByD-tenant or do I have to re-engineer it completely?

the template only works on C4C. The underlying functions are not present in BYD.

Thanks for this very useful template.

I get the following error message when trying to upload the template to a 1708 system:   "Release SAP_LEAP 611 of solution is not compatible with system".

Any chance you could update the template to work with 1708 ?

Thanks Stefan, everything works perfectly.

Can you please update the link again?

can you please update the link again an make it compatible with 1811?

Could you please update the link?