SAP TechEd Barcelona 2016 just finished last week and I must say I had a really good time there. It was definitely worth the 20+ hours of travel time it took for me to get from Kuala Lumpur to Barcelona (thankfully it was shorter on the way home).

I was also glad that joining the pre-conference Community Call helped me get ready for TechEd Barcelona since it was my first time.

Here are some highlights from my point of view. 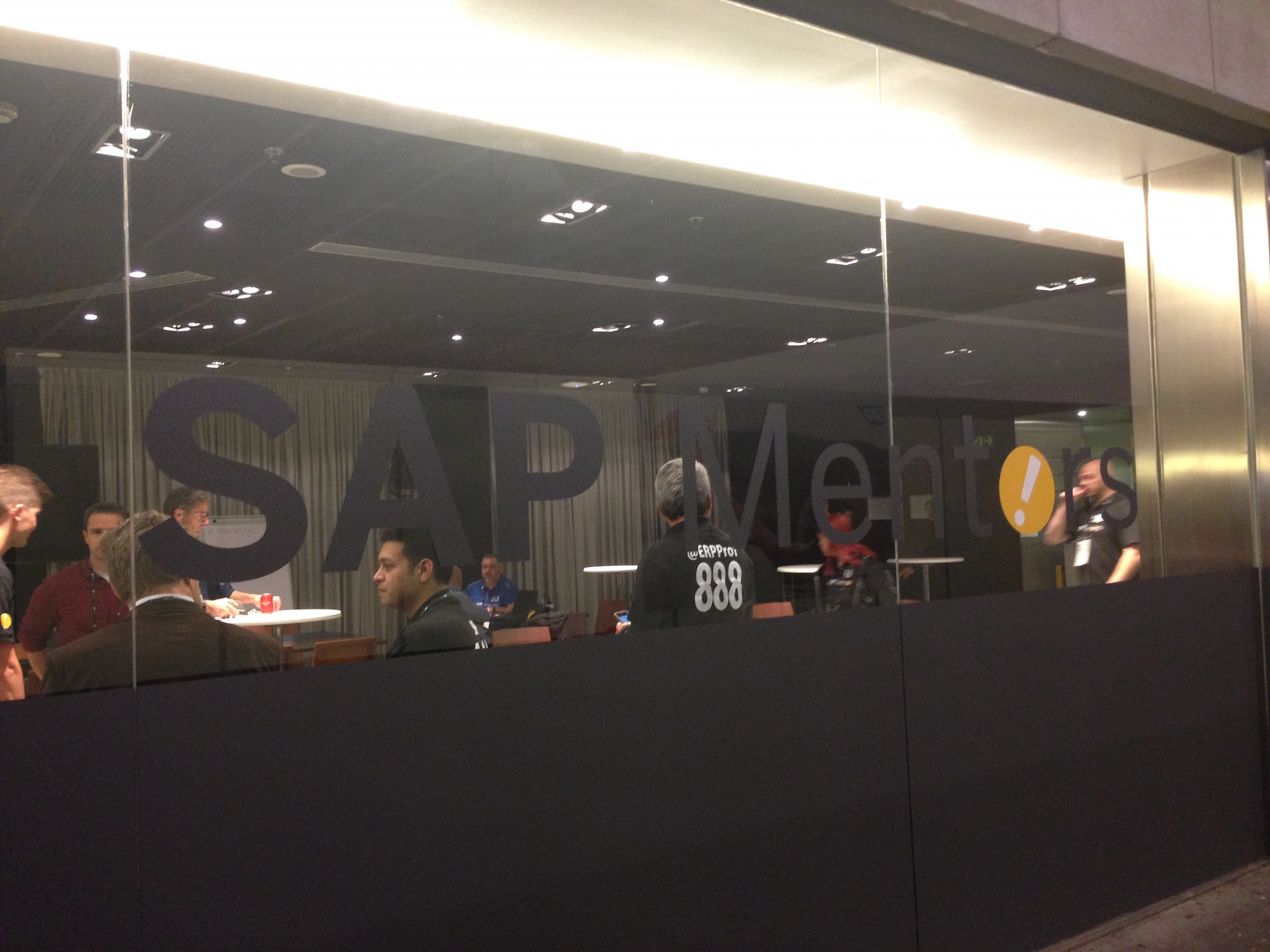 It was just great to finally meet some of the acquaintances that I’ve made online through the SAP Community as well as make new ones. There are too many names to list, but I really had a good time networking with the SAP Mentors, the Program team and the SAP Community team. I was even surprised that some even recognised me from the notoriety of posting this blog.

Being a new Mentor this year, unavoidably we had to go through the Mentor Initiation Rites to be “officially” inducted into the wolfpack! This meant some individual singing was involved and it was a great opportunity to showcase my nursery rhyme singing prowess (courtesy of my 18 month old daughter) – I’m glad that I passed the rite singing “Wheels on the Bus” with many singing along too! 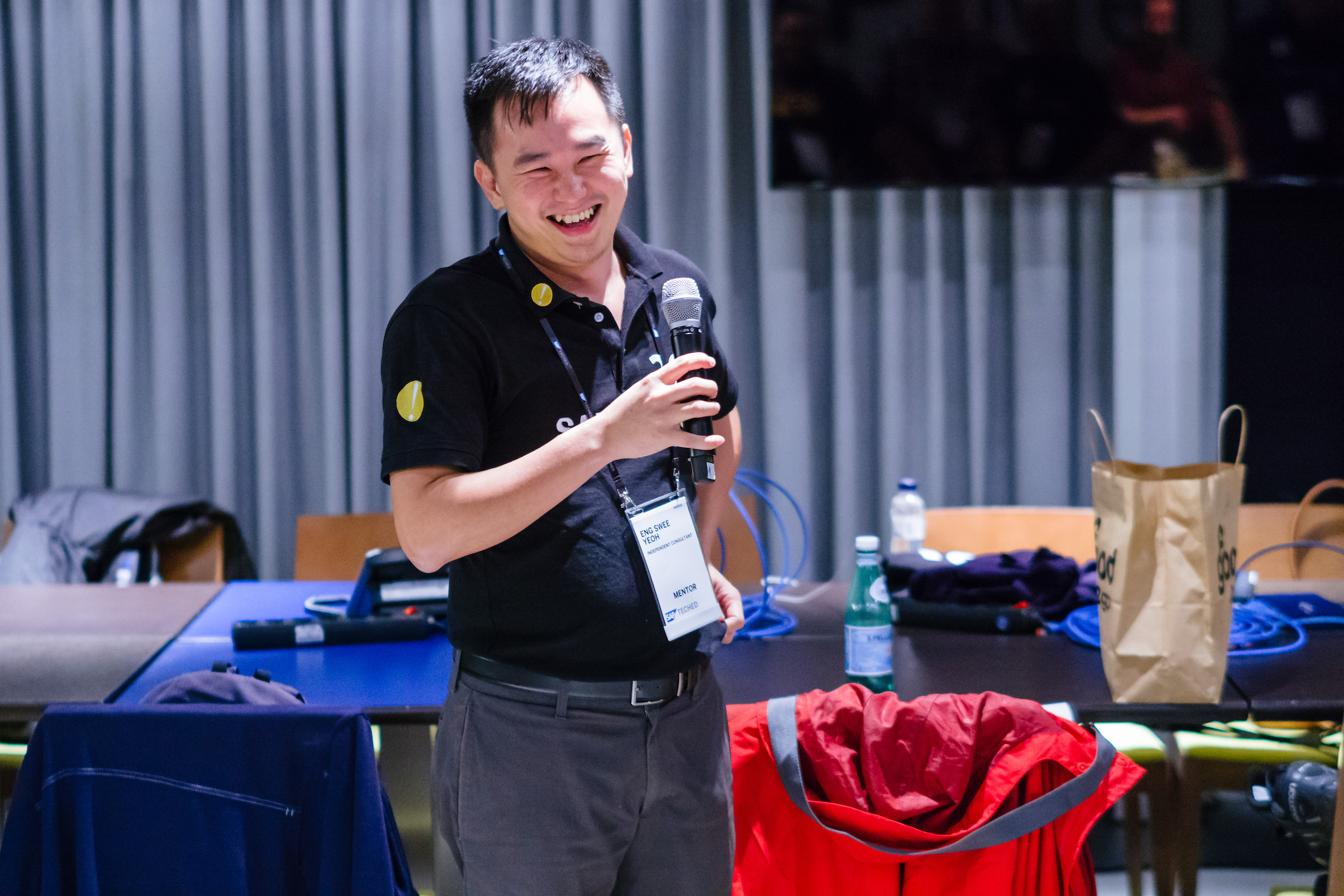 API Management and API Business Hub – APIs everywhere!
Since there isn’t much new fancy shiny stuff in my area (Process Integration), I decided to learn more about APIs. 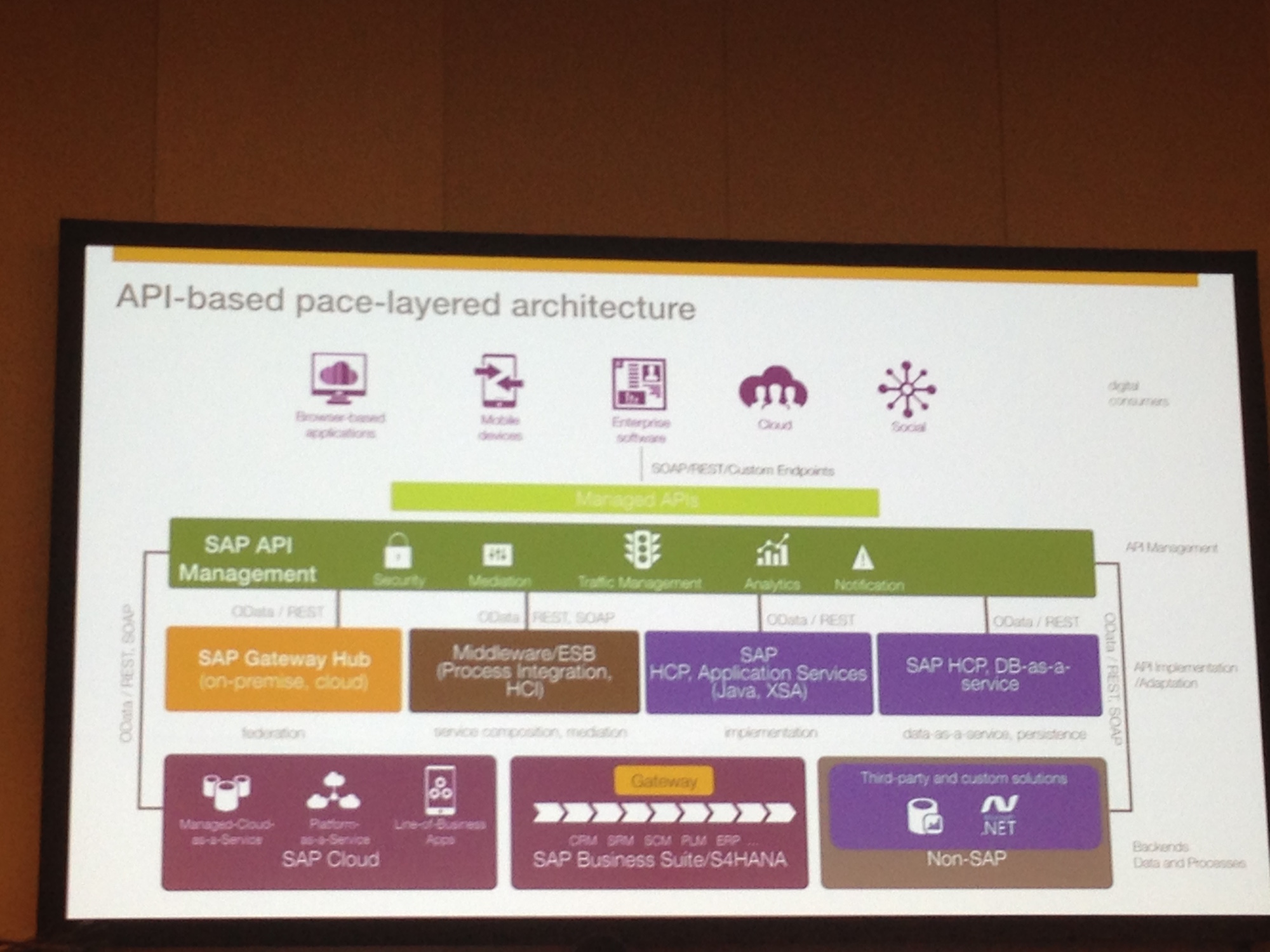 My two hands-on workshop were INT266 (How SAP Process Orchestration can leverage SAP API Management) and INT263 (Building an SAP Fiori App using APIs from SAP API Management). The sessions’ main speakers Bjoern Woppman and Former Member were very knowledgeable and helpful, and answered so many of my queries.

With other leading iPaaS vendors like Mulesoft positioning their integration solutions based on an API-based model, API management is definitely appearing in many a crystal ball.

As for API Business Hub, it also definitely looks good, but my hope is on the backend provider side, SAP reengineers their solution and do not reuse any of the oh-so-fun-to-use legacy BAPIs. Hopefully someone from SAP read Christian Drumm‘s Hello SAP, where are my APIs? and look into it seriously.

IoT – Things everywhere!
IoT featured prominently at TechEd, where it was even one of the demos on stage at the keynote. I had a dabble into a few IoT related sessions, and even got myself into a third hands-on workshop, INT267 (Use MQTT to Develop IoT Integration Scenarios for Messaging as a service). The trick is to go to the session’s room and if it’s not filled at the time the session starts, you will be allowed to go in for audit (or even hands-on if there is enough space). This session didn’t take the full 2 hours, but it was good to learn a little bit more about the MQTT protocol which is the current popular protocol used for IoT devices.

The more interesting bit for me for IoT was happening at the Show Floor booths. I did not manage to visit all of them, but there was one showcasing the Asset Intelligence Network solution based in HCP. There was a maintenance setup demo built using Lego (don’t you just love them) and the HCP system was automatically updated whenever there were movements of pieces in the demo set. IMHO it was a very practical showcase of some of the real life possibilities around IoT. 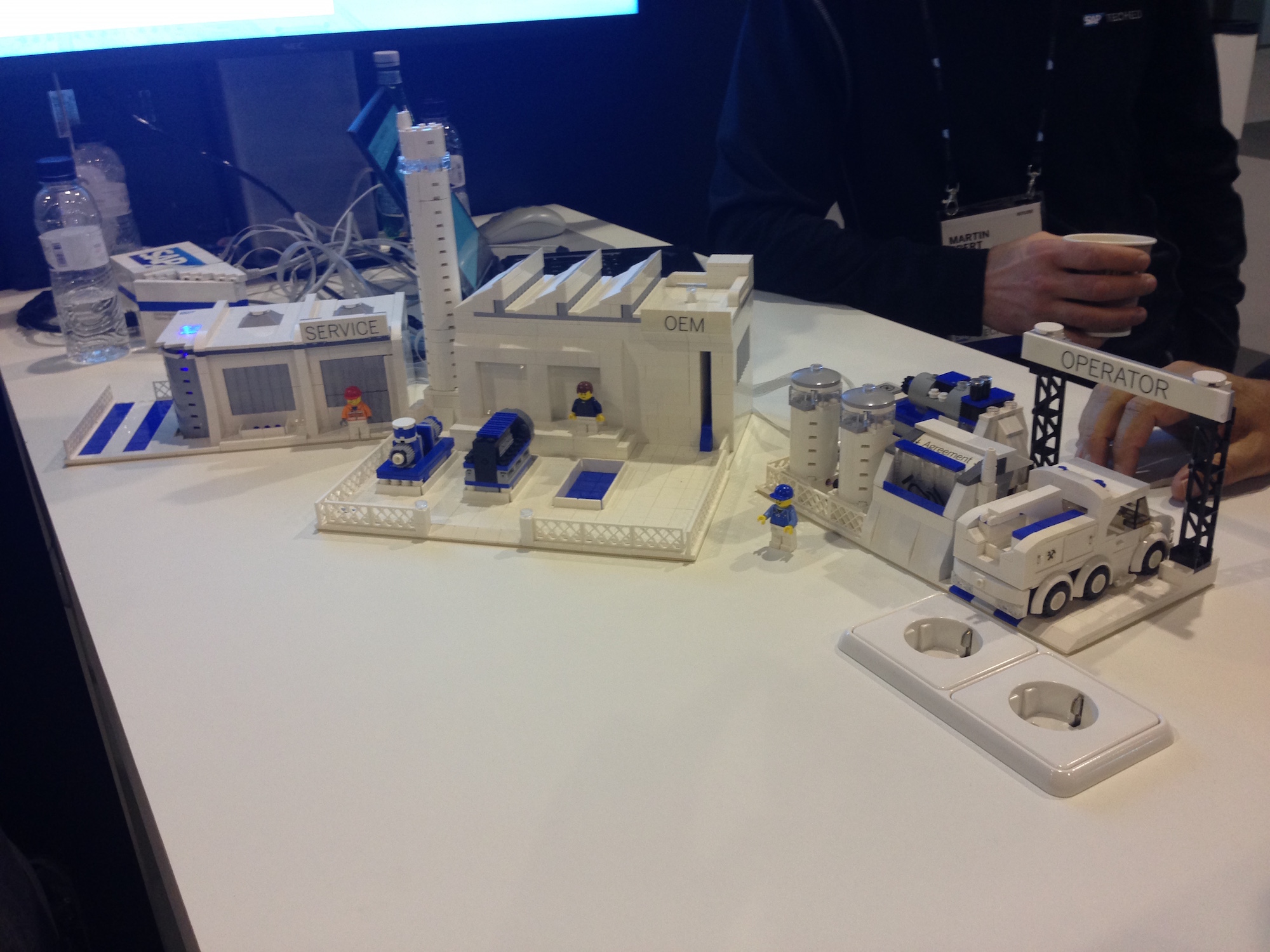 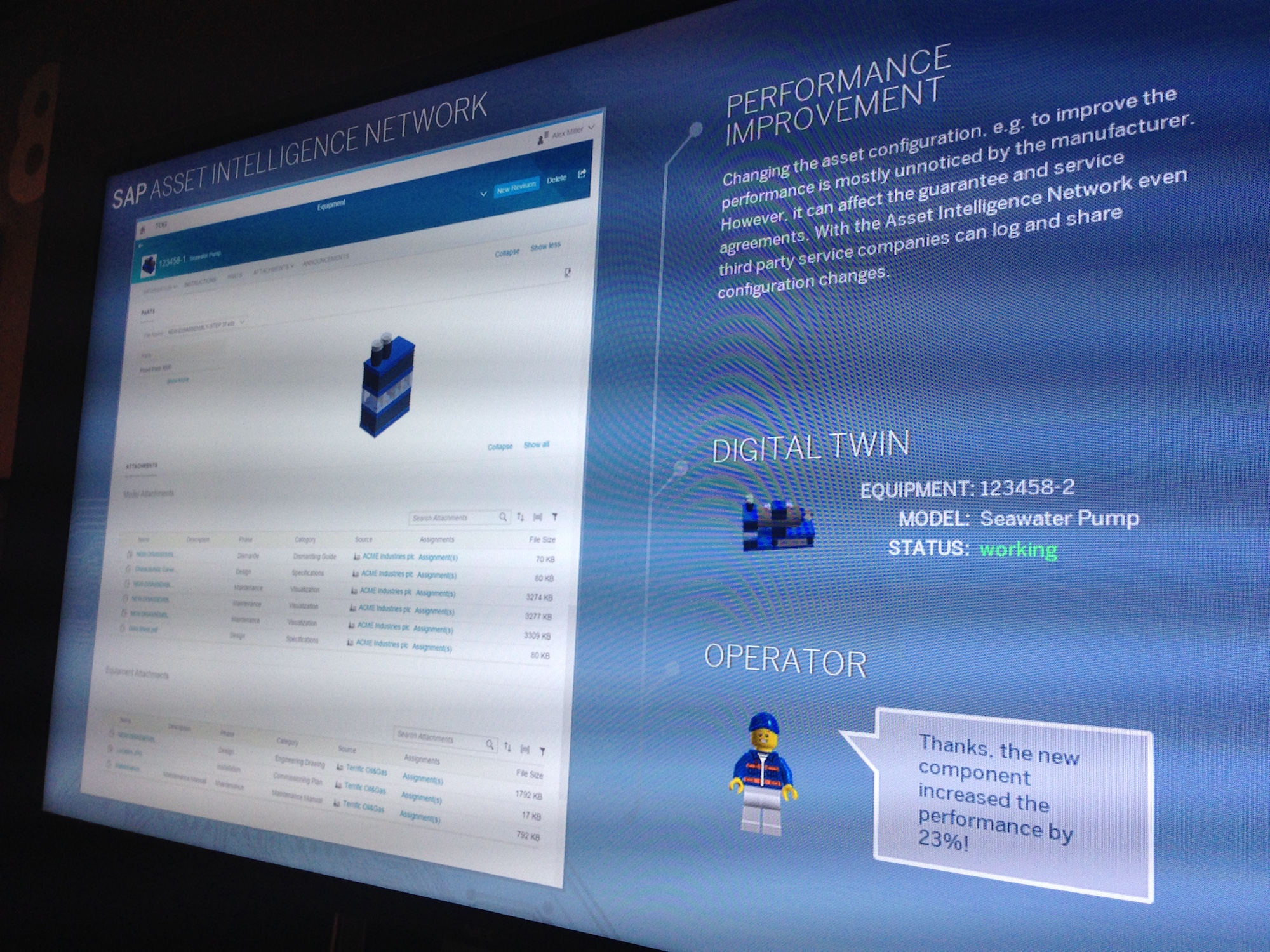 App Space – Apps everywhere!
What is an IT solution without Apps, right?

In between sessions, I went to the Show Floor and there was an area called the App Space where one can go through tutorials for developing Apps on HCP. And if you complete certain milestones in the tutorials, you get an email with a QR code which you can use at an HCP-based smart vending machine to collect prizes. I won myself some T-shirts, bottle-opener-cum-USB-drive, and power bank – pretty cool souvenirs to bring home! 😉 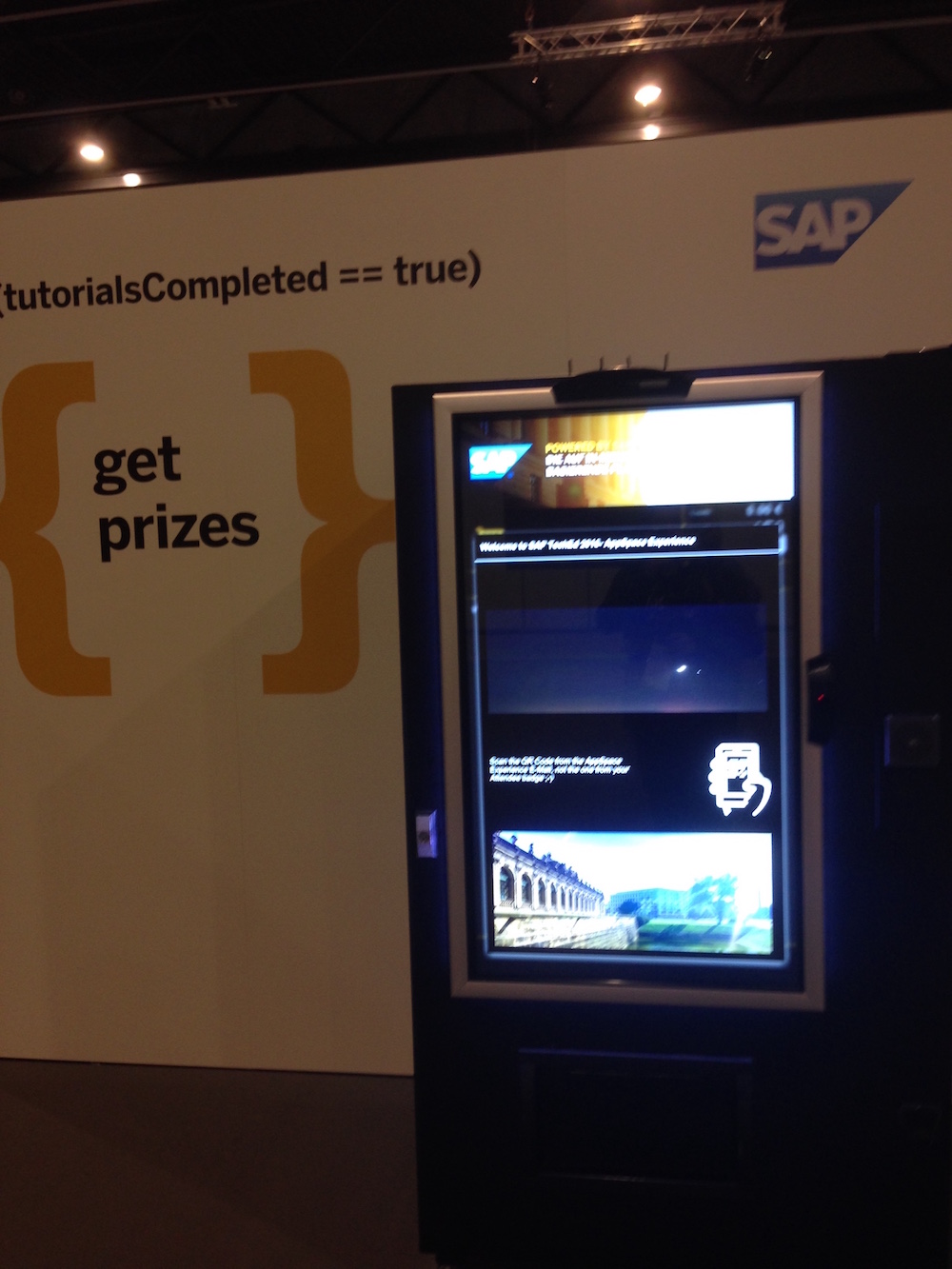 One new interesting tool coming out of SAP is BUILD. It is supposedly a tool used to quickly prototype apps and easy to use for even non technical user. Had a good time listening to the gentleman demonstrating the use of the tool. 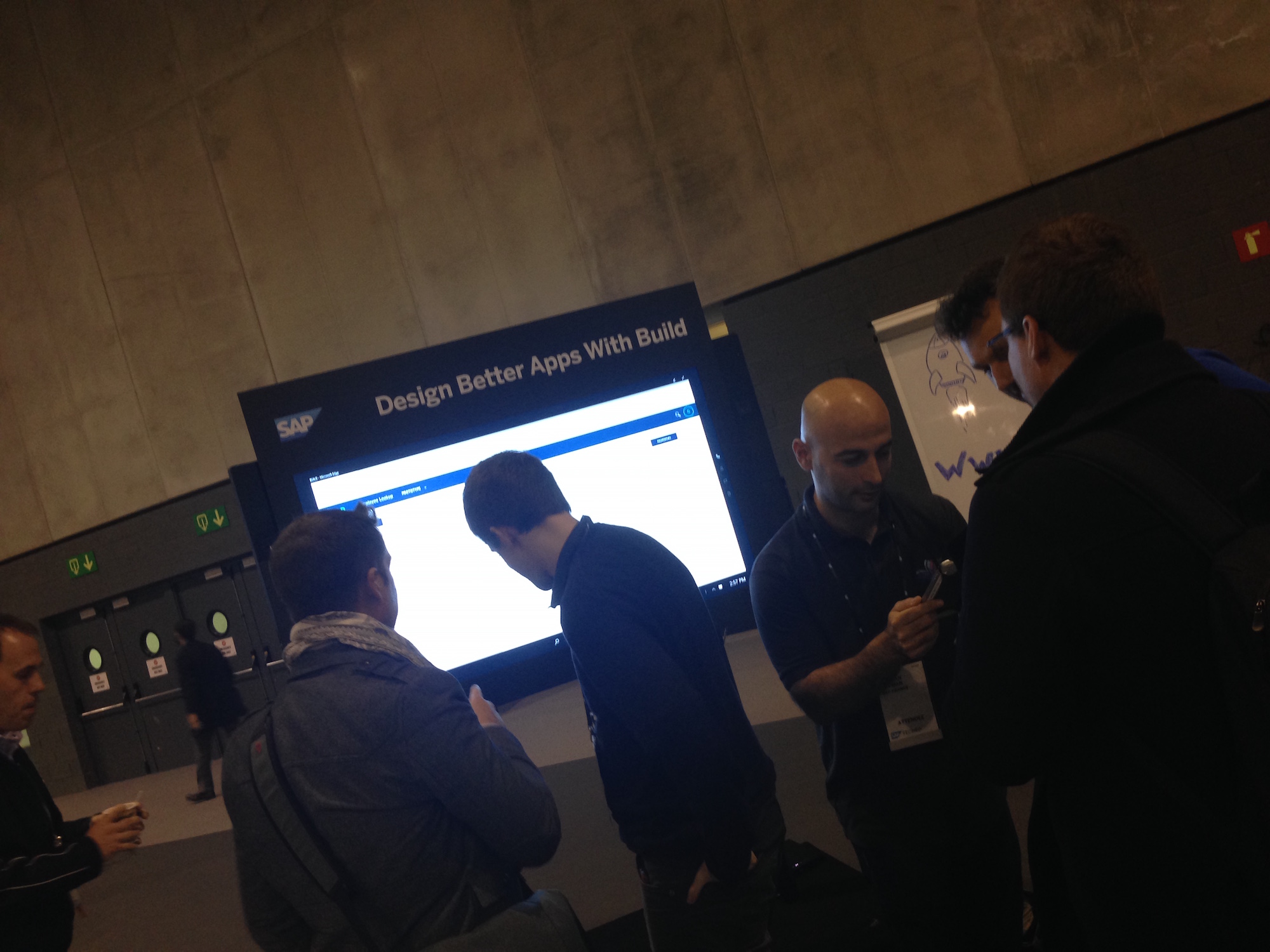 Process Integration Anywhere?
Well, I can’t attend TechEd and not have anything related to PI/PRO, right?

Since automated testing remains a real pain point in integration, the following two sessions was on my schedule.

The first one by Michal was a continuation of the discussion on his blog. Since it was just a 30 minute networking session which was jam-packed, we couldn’t get around to something conclusive – which wasn’t the intention anyway. It was more to raise awareness that we as architects and developers, need to think more on figuring out a way for interface automated testing.

The second session was one of the few hiccups I faced at TechEd. We were supposed to clone the following GitHub repository, then try to build the test environment and run the test. However, there were connectivity issues on the laptop I had my hands on and on several others as well. In the end, most of us just watched the speaker performed the steps. With the stuff on GitHub, hopefully I can find some time to look into it, although I might not be able to run it locally since it involved some backed SAP servers. We’ll see. 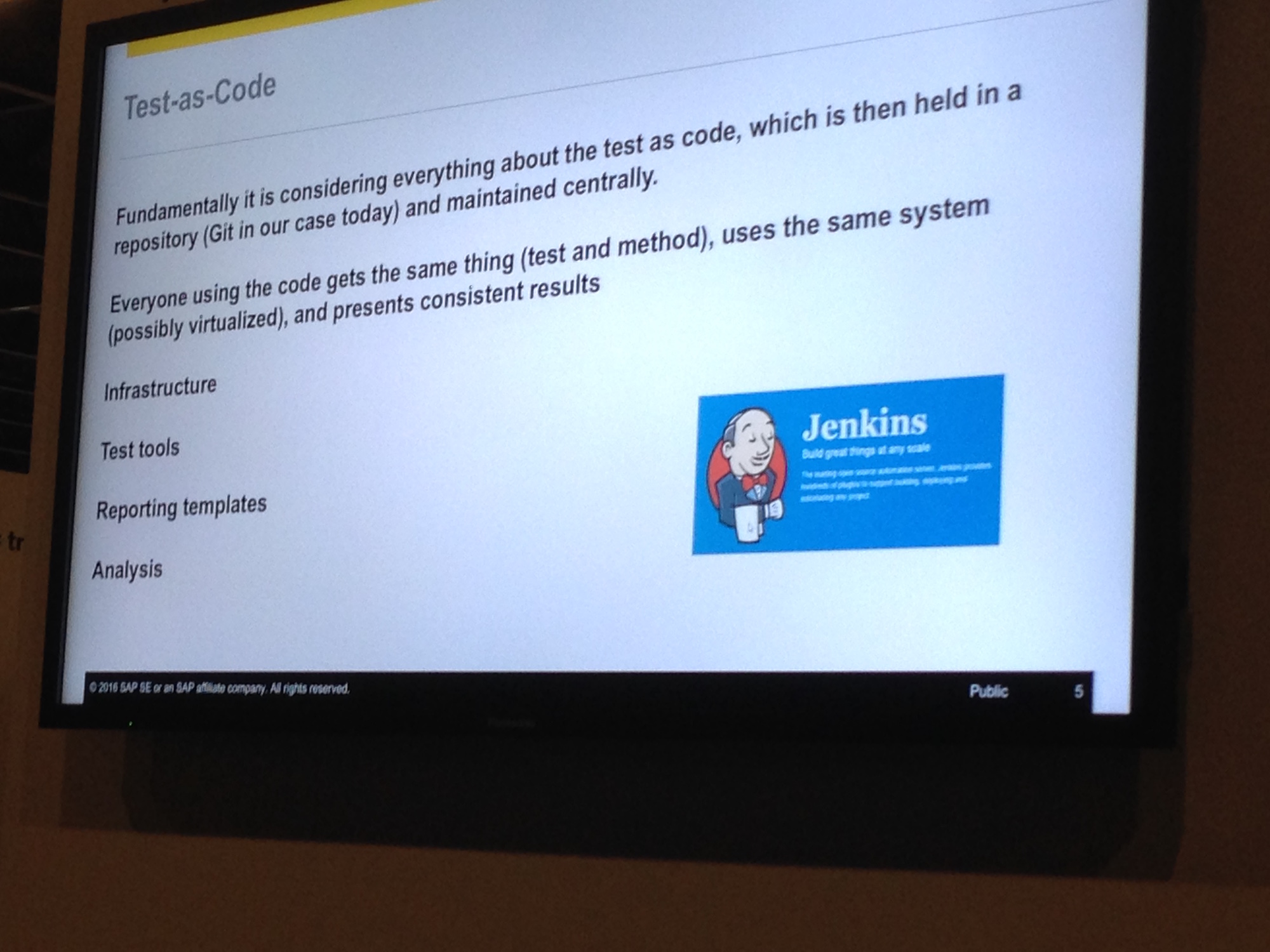 Networking schmeckworking – Experts Everywhere!
On a personal side, my biggest highlight was meeting fellow integration experts, Michal Krawczyk and Vadim Klimov in person. We managed to get to know each other better (who would have known that Michal is pronounced “Me-How” in Polish!) and some of the work and challenges we are facing. For me, all these deep conversations and interactions were absolutely priceless, and hopefully forms the foundation for strong friendships for years to come! 😉 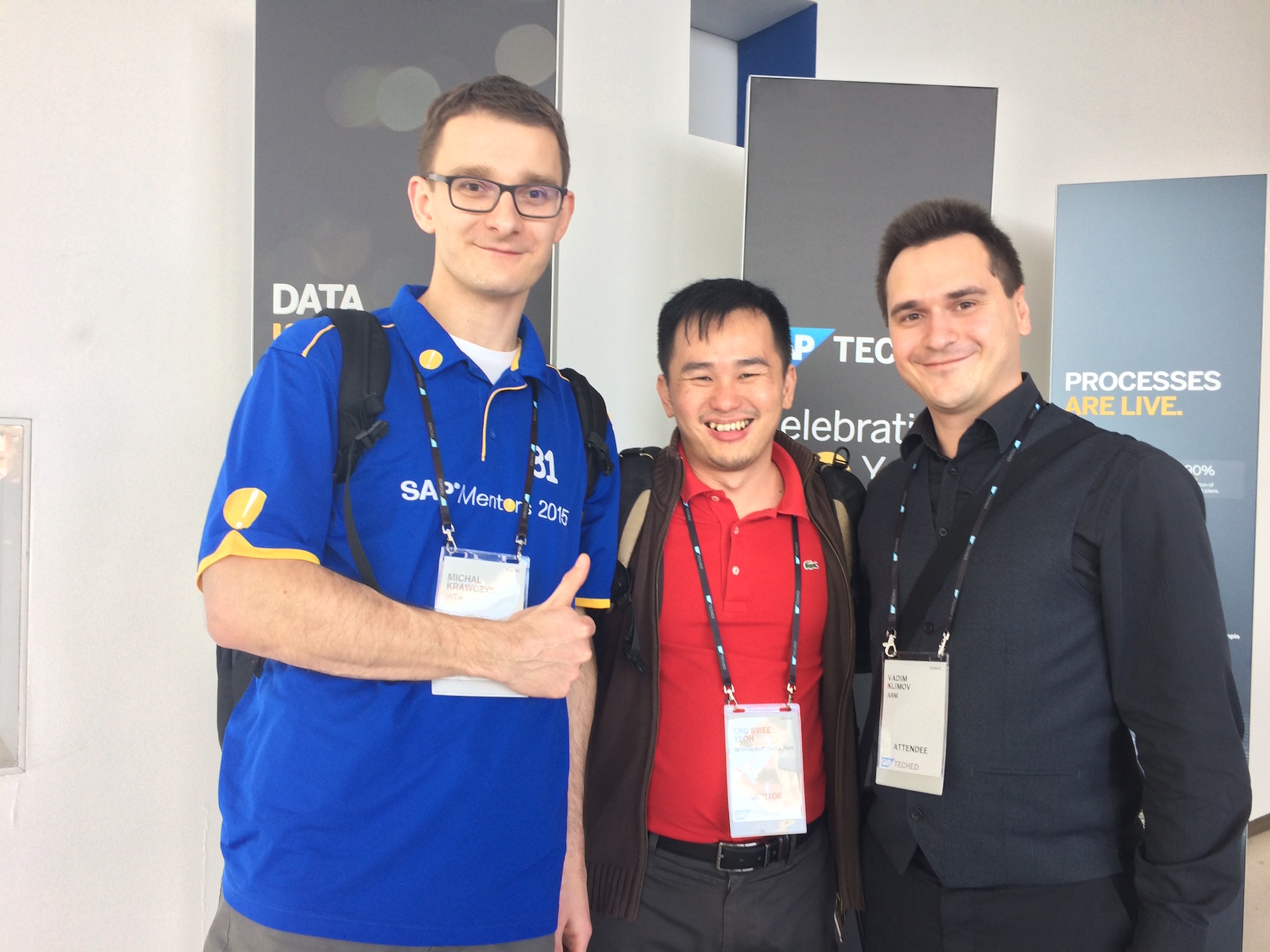 I must admit it was a bit nerve-wrecking and I fumbled quite a bit at the beginning, but as I got into the flow I managed to complete it just in time without referring to my notes – hooray! For those interested, the replay is available.

At the end of TechEd on Thursday, before we said “adios” to one another, some of us had the opportunity to attend an evening of empathy conducted by Seung Chan Lim (Slim).

It was at a nice cosy restaurant in downtown Barcelona, and we had the basement area which was really cool and fantastic Spanish food. We were separated into smaller groups trying to work through how to be able to be more empathetic to a particular person of choice in our professional life.

I enjoyed the style of the workshop done by Slim, and there were a lot of food for thought. There were a few activities which were designed intentionally to be uncomfortable for us, like staring into the eyes of a group mate (which could be a total stranger) for a good 2 minutes at close proximity. Some of the other activities required role playing and writing down some of our thoughts and formulating some kind of action steps.

Being an INFJ, I found it hard to put my feelings and emotions into paper in just a few minutes so for most part of it, I was more of a passive participant trying to mull things in my head. Nonetheless, I did enjoy all of it, and the last part was particularly interesting. To finish off the event, each pair were given a picture, and one person will have to express the emotions of someone from the picture – but to do it with just our eyes, no other facial or body expression! The other person will have to figure out what were the emotions being communicated. Mine was a picture of a soldier comforting another soldier, and amazingly my partner managed to figure out that my eyes were communicating tiredness and sadness. And apparently, quite a number of pairs were successful too.

And with this TechEd came to an end. It was a bit unfortunate that I wasn’t able to say goodbye properly to others as I had to run to catch the last train back. 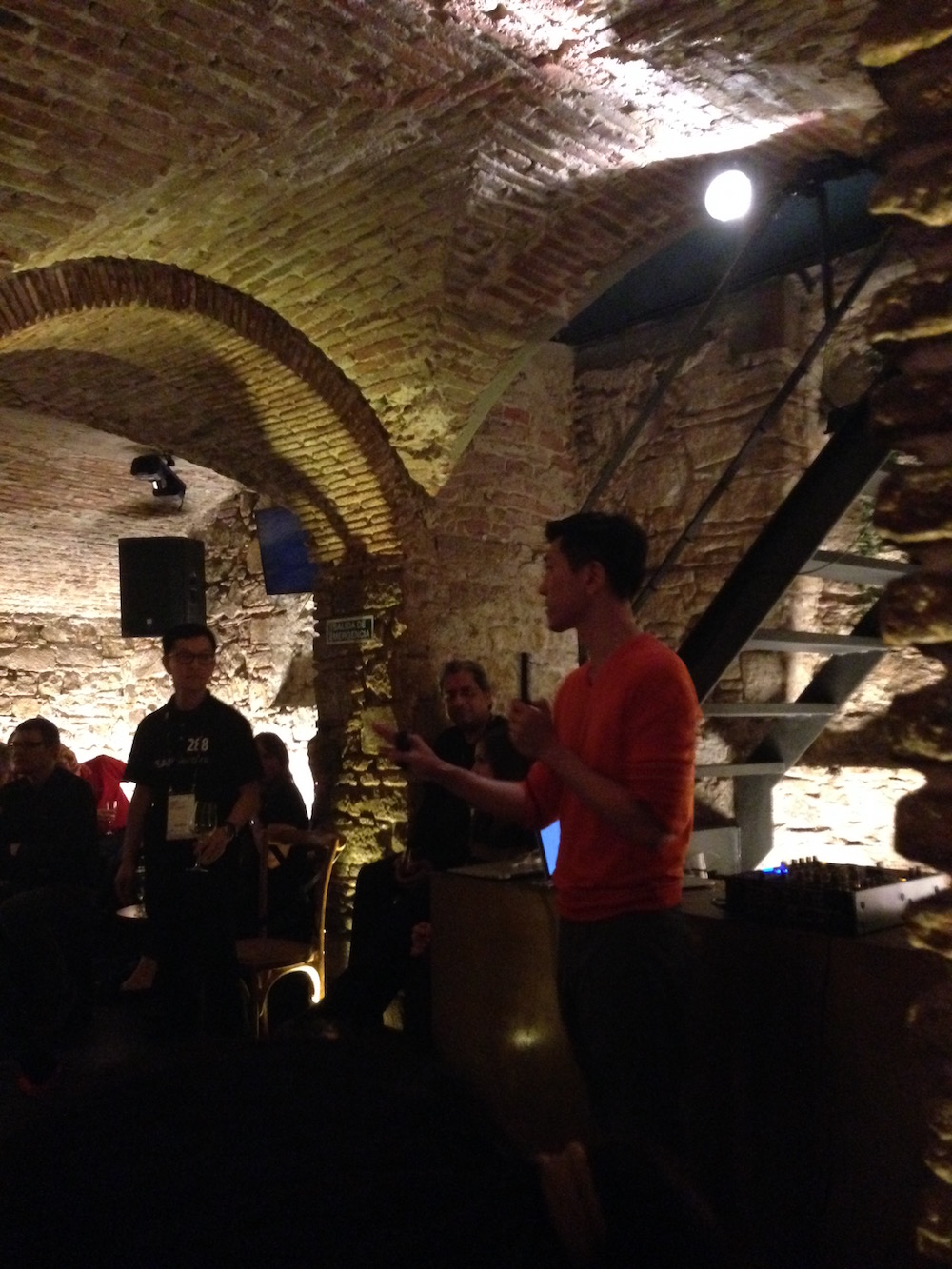 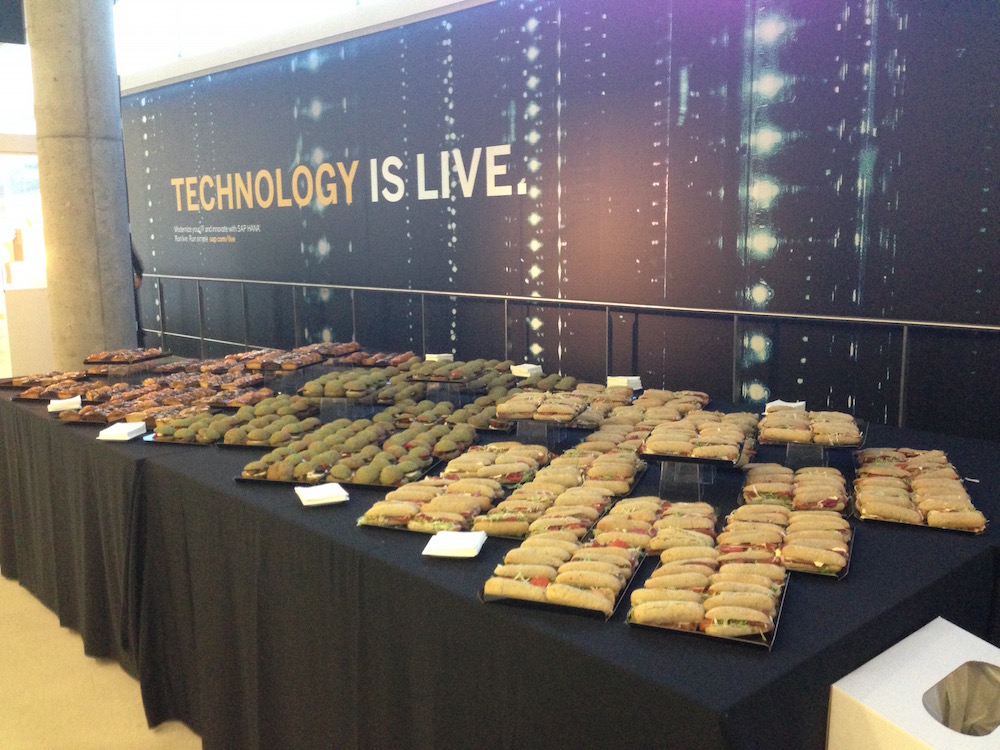 Congratulations on your session - very informative ! 🙂

Great to see a new Mentor doing an amazing session,

The session you did, was nothing else but great! My respect and appreciation for efforts you invested into its preparation and delivery to wider community during TechEd (and also for developments you did and shared, and that became basis of practice part of the session).

It was very big pleasure for me to finally meet you and Michal in person, and to enjoy time not only having professional discussions on integration topics (those were doubtless of much value), but also having coffee breaks together and catching up after sessions.

Hope to see you both again - until that, let's keep in touch!