Understanding Frontend Server (Gateway) Interoperability in the context of S/4HANA

Suppose you are in the situation that you need to run some Fiori apps against both SAP Business Suite and an S/4HANA system. You might now ask yourself whether it is possible to have only one Front-End Server for all backend systems?

As always, the typical consulting answer applies, it depends!

SAP typically recommends to have one central hub deployment as described in Landscape Deployment Recommendations for SAP Fiori Front-End Server, which would then provide the Fiori UI components and fetch data via OData from all backend systems behind it.

It is in general possible to run one central Front-End Server hub against SAP Business Suite and S/4HANA.

Prerequisite is that different software components are used in SAP Business Suite and S/4HANA. This is not the case when running S/4HANA Finance (formerly known as Simple Finance respectively S/4HANA 1503/1605), which is technically speaking an Add-on to SAP Business Suite on HANA.

S/4HANA Finance has its own codeline, which is the same when deployed on SAP Business Suite or running on S/4HANA. This means that a co-deployment of Simple Finance in 1503/1605 and 1511/1610 is NOT possible.

In S/4HANA there is a 1:1 dependency between UI components and backend. Both have to be on the same version including SPS level. Even when using Fiori apps for Business Suite, the UI components require the matching backend.

So, what does this mean in detail for UIAPFI, the UI component for Finance applications?

To break this down into examples:

And what about UIS4HOP, the UI component for additional other S/4HANA On-Premise applications?

The key differentiator is the UI version. If different UI versions need to be used because of different backends on different versions, it is required to have an additional Front-End Server deployment.

At the moment deployment of multiple versions of the same software component on the same SAP Fiori Front-end Server is not possible. 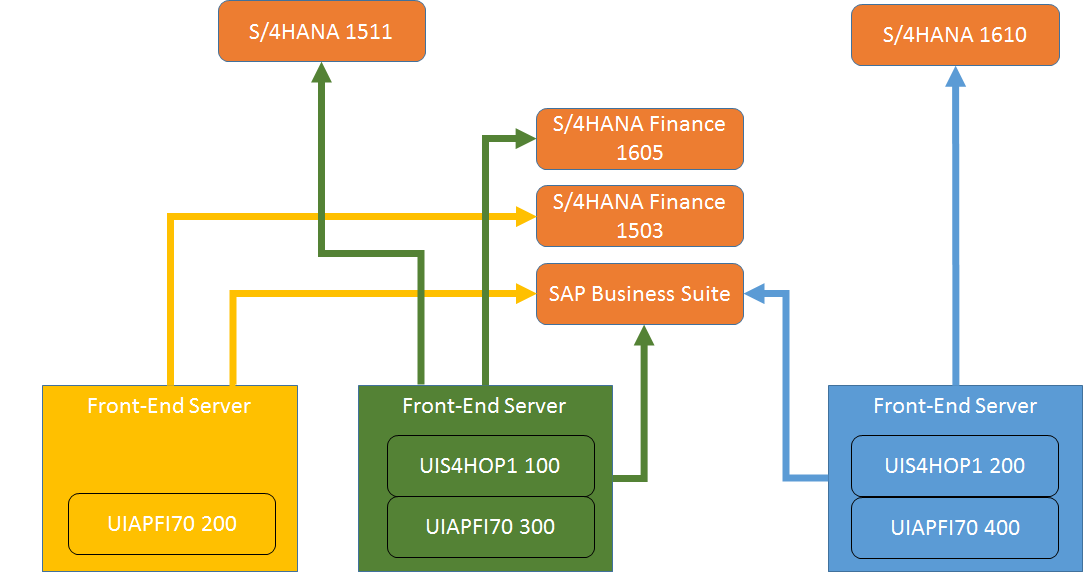 Thanks Thomas! A good clarification for the Fiori Landscape.

Thanks Thomas! There is usually a lot of confusion among components UIBAS001, UIAPFI70 and UIS4HOP versions and you have clearly explained the differences. I'm sure this will help a lot of customers.

Excellent clarification with examples, You shed light on the topic which was a bit confused.

Many Thanks for your effort.

I believe that, i should not have UIS4HOP1 200 on S/4 HANA system. is my understanding correct?

1) Can we have multiple Front End Server located in different geographical areas connected to the same backend server?

2) Are there any advantages or disadvanatages for this setup? We are trying to split the users based on geography?