What do 28 acrobats, a 40-foot wingspan and a Mobile App have in Common?

If you’re still bewildered, these unforgettable characters are portrayed in spectacular fashion by Cirque du Soleil® in the live presentation of TORUK – The First Flight. The wildly entertaining presentation is inspired by James Cameron’s Avatar, however, the events occur long before humans ever set foot on Pandora, as the mythical tale occurred thousands of years before the events depicted in the film.

During a recent discussion with “SAP Presents Live,” Cirque du Soleil CEO, Daniel Lamarre said the organization has accomplished amazing success in shows like TORUK – The First Flight simply by allowing their artists and creative teams to push the boundaries of creativity – and the result has been nothing less than a redefinition of circus arts. Lamarre further expounded on the importance of running a live business as it specifically relates to Cirque du Soleil. “To deliver to the audience, you have to be able to understand what’s going on in each location. It doesn’t matter where I am on the planet. I now have access to all of the data that is going to give me the rhythm of the organization.”

Not surprisingly, Lamarre believes that teamwork continues to be a critical component in creating the amazing “dream state” that is a Cirque du Soleil performance. He stated that in order to continually push the boundaries of creativity and consistently surprise the audience, new technologies must be embedded in the creative process as live entertainment will continue to change.

Additionally, Lamarre has been buoyed by the fact that he now has access to live and immediate information.

“For us, SAP is a great friend and my traveling companion. Their systems are embedded in a way that manages the company and allows me to have access to all of the information that I need on a day-to-day basis.”

That type of information includes having live access to a performance quite different from other Cirque du Soleil shows. Written and directed by Michael Lemieux and Victor Pilon, the story of TORUK – The First Flight, is narrated by a “Navi Storyteller,” and makes use of stunning projections, 16 large-scale puppets, and includes characters not originally included in Avatar.

And if the astonishing wingspan of Toruk isn’t already close enough to the audience, fans can now immerse themselves even further into the performance thanks to new technology. Powered by SAP HANA, the  TORUK – The First Flight mobile app allows audience members to become part of the show.

Before things even get underway, the app allows fans to explore Pandora and search for clues that will help them unlock mysteries of the five ancient clans. Once the show begins, the app informs fans when to interact with their phones – thereby allowing them to enjoy the show without it becoming a distraction.

All this is accomplished by the SAP HANA platform via expedited communication between the spectator’s mobile devices and the show’s visual effects control system. By using geospatial technology, every seat in the house becomes an extension of Pandora.

Clearly, this new type of show defies categorization as much as it defies gravity. While combining circus, theater, and technology, use of the app makes the audience members part of the performance.

Many among the globe-spanning audiences of Cirque du Soleil may not realize that the acrobatic performers playing their parts in the surreal world of Pandora find their own inspiration much closer to home.

With Cirque du Soleil committed to being a global citizen, its community relations are promoted through activities and program.  Moreover, many projects are put in place to reduce the Cirque du Soleil carbon footprint, contribute to the well-being of its employees and to develop the strength in communities they visit. By the end of 2016, Cirque du Soleil will reduce the greenhouse gas emission of their operation by 15% compared to 2009.

The setting for TORUK – The First Flight is the distant moon of Pandora, however, it’s their efforts back on earth that keep employees of the high-flying Cirque du Soleil so grounded and close to their roots – and preparing young people for their own “first flight” is an awe-inspiring act indeed.

TORUK – The First Flight represents the most recent technology collaboration between SAP and Cirque du Soleil. Since 2001, SAP has helped Cirque du Soleil become one of the largest entertainment companies in the world. By implementing a wide range of SAP® solutions, Cirque du Soleil continues to simplify its global operations including finance, human resources and procurement systems, helping streamline its business logistics and drive rapid growth.

You can hear more from Cirque du Soleil,  CEO, Daniel Lamarre in this SAP video where he describes how Cirque du Soleil is using SAP to support the business’s goal to Run Live. 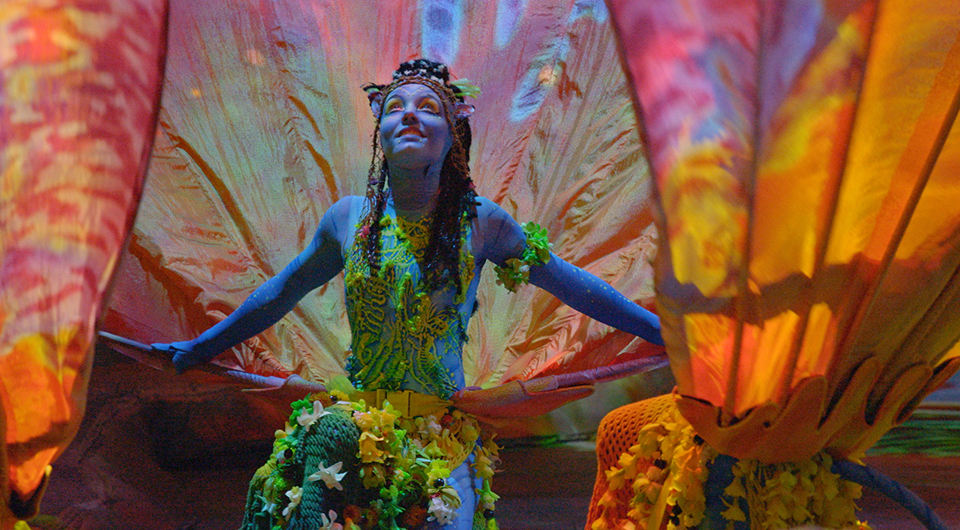