This is part 2 of my blog series about cloud architecture on SAP Cloud Platform. You can find the overview page here.

In this blog, I want to help you understand a topic that I experienced as potentially confusing for people who are new to SAP Cloud Platform and cloud architecture: The concept and difference between members, application users, and database users. As a warning: this blog is fairly theoretical. But sometimes, you cannot avoid to study theory before you can actually use it in practice. I will therefore try to keep it as understandable and interesting to read as possible.

When you are constructing your cloud landscape, you’ll have to think about “where your users are coming from” and how to manage them. Depending on your applications and the way you use SAP Cloud Platform, different approaches make sense here. Due to the complexity of the topics, I will write multiple blogs about user management and concepts but before you can begin to plan your user management, you’ll have to understand the general rules behind users on SAP CP.

As of today, there are multiple “types” of users on SAP CP which all have different purposes. It’s very important to understand this differentiation because otherwise, you’ll end up with an inconsistent user management approach. I typically distinguish three types of users (by the way, this is only my own “inofficial” naming scheme): 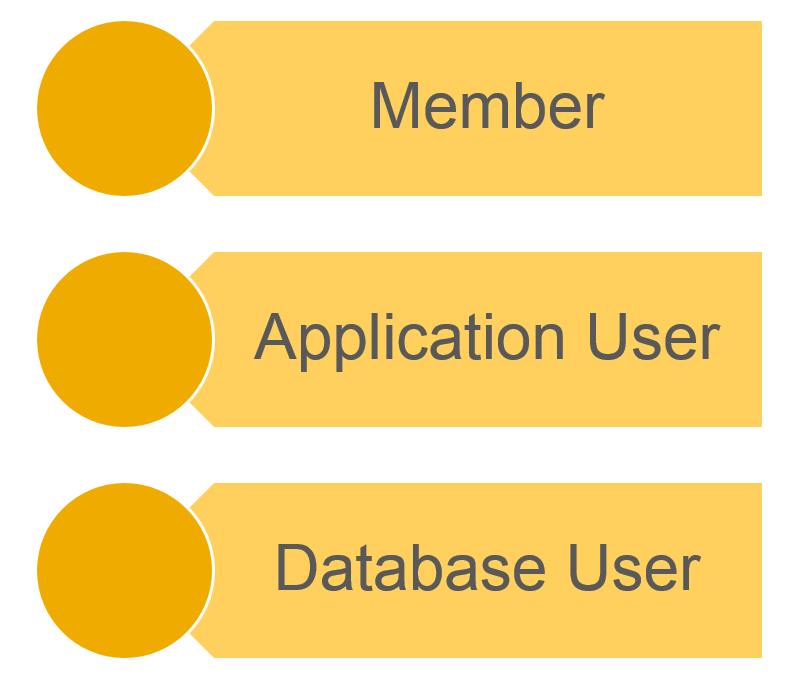 Later on, I will tell you where these types of users are typically provisioned from and which type of user can be used for which purpose. Although, for example, Members could be used to access applications, from my point of view, they should not be used for this in real productive environments. But first, let me explain the three user types:

You can refer to the official documentation for the definition and roles of Members. As you see from the documentation, members can either be administrators or support users, but also developers (use Web IDE, start and stop applications, make commits to repository, create new applications). Theoretically, you could also use members to access applications, but later on I will explain why this is a bad idea in productive scenarios from my point of view.

The third user type is the Database User. This user is located in your HANA database in the cloud. It is possible with App2AppSSO that you propagate the application user down from the application layer to the database layer and use the same user(name) for the application and the database (I assume that you have a Java or HTML5 frontend and a HANA backend which is the typical case). Technically though, those users will be different entities because the HANA user management in SAP CP is NOT integrated with the application user management nor the member management. This is an extremely critical thing to understand and leads us directly to the next topic that we have to understand: users can be provisioned from different sources (“identity providers”).

Today, there are five different sources that could provide users into your HCP Sub-Accounts: 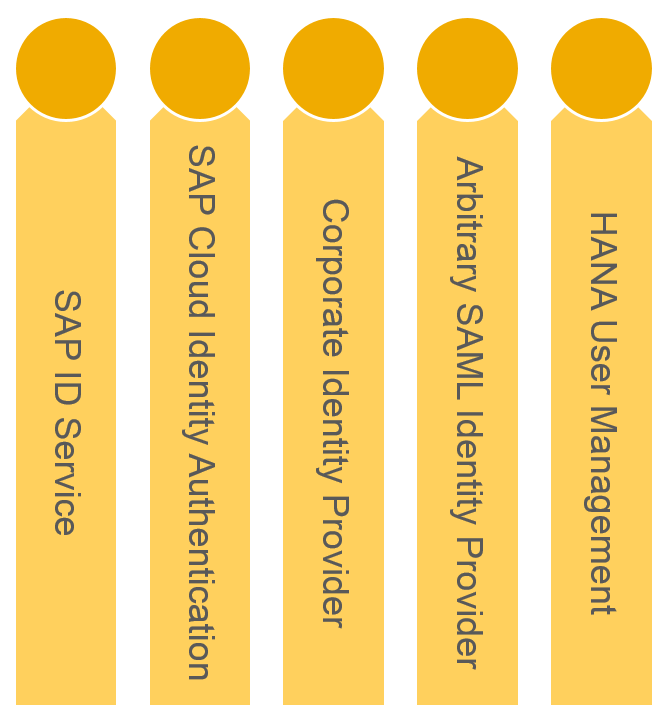 The first one is the SAP ID Service. This service is a global service from SAP that provides a huge amount of users worldwide (I think I heard 6 million users once but do not quote me on this). All S-Users, C-Users, but also SAP internal I-Users and D-Users are provided from the SAP ID Service. You can assume that as soon as you have one of these users, that this user is typically provided to most of the SAP web-applications (marketplace, SCN, support portal, … everything) via the SAP ID Service.

The second source of users is the SAP Cloud Identity Service Authentication (SCI). If you license the SAP Cloud Identity Service Authentication from SAP, you’ll basically have a cloud user store that provides a public SAML endpoint. You can manage your users within this service and basically connect it not only to SAP CP but to any kind of application that uses SAML for authentication. At this point it’s important to note that SAP CP itself does NOT have a “built-in” user management. It will always rely on other identity providers that provide users via the SAML protocol. Your SCI tenant could be one of them. By the way, the SAP ID Service (our first identity provider from the list) is basically a SCI tenant that is managed by SAP. As usual, SAP “eats its own dog food” and also users SCI to provide users to applications. But when you choose to license a SCI tenant yourself, you’ll have full control about this user store (and not SAP, which only has full control about the SAP ID Service tenant)).

The third source of users is your Corporate Identity Provider. Typically, I see my customers either use LDAP, and Active Directory, a NetWeaver UME, or other SAP systems to manage their internal users. If you already have this identity provider in your company (most likely…), you should think about whether it would be a good idea to integrate SAP CP with these identity providers so you do not have to replicate the users in some external cloud identity provider such as SCI (there are pro and cons for this decision. Let me know whether you agree to my recommendation…).

The fourth source is an arbitrary SAML identity provider. Technically from SAP CP perspective, this identity provider is the same as the second one, but it’s not coming directly from SAP. If you already have a third party identity provider that provides its users via the SAML protocol, you could think of reusing that provider by connecting it to SAP CP instead of licensing SCI additionally. At this point you can see that SAP is really serious about providing an open platform with SAP CP – no one forces you to use a certain identity provider. You should however make sure that your identity provider can also communicate group information via SAML assertion attributes. Otherwise, you’ll not be able to tell which user belongs into which group (we will cover this in the next blogs in more detail).

At this point, probably you are a bit confused about the different types of users and the different types of identity providers. Relax, I’ll now bring the two parts together and explain which user can be used for which purpose and later on, I will also give you my personal recommendations of what I think how you should use the users.

Look at the first two pictures again and now imagine that you overlay those pictures. You’ll end up with a matrix in which we can now depict which type of user is provided by which source: 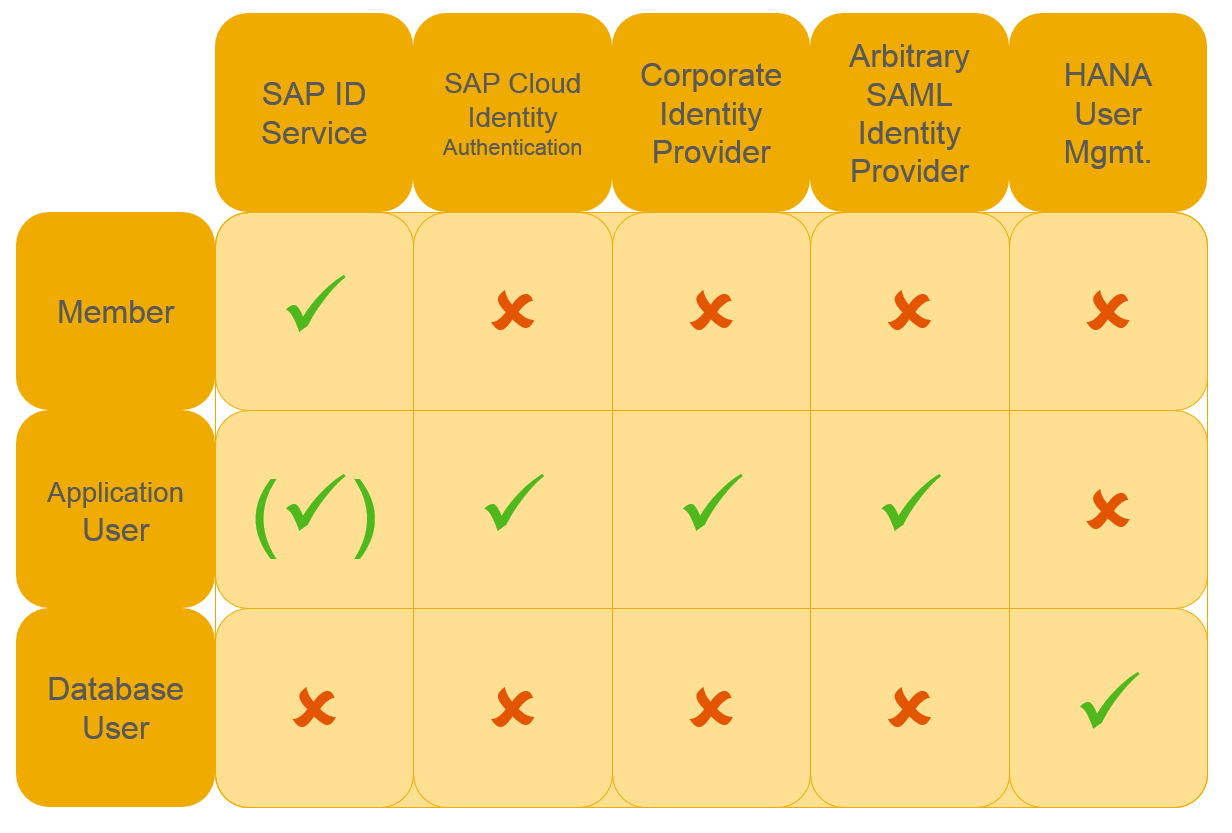 The green and red icons symbolize whether the user type can/should be provisioned from the respective identity provider. Studying the matrix in detail will bring you to the following conclusion:

Essentially, it really boils down to those three rules. Easy, isn’t it? Well, as usual, you should consider a few details and issues in practice:

I hope those explanations already helped you in understanding the topic so that you can also explain it better to your customers. Of course, you can also find much of the information somewhere spread over the official documentations but I hope with this article you understood the topic in one read without extensive research in multiple documents. As always, let me know whether you found my blog useful! In the next blog, I will dive deeper in how you can actually manage your users with different identity providers and give you some tips of how to integrate them with SAP CP. See you there!

Good points picked for series of blogs! Almost all the items picked I had to deal with in my present role. Waiting for remaining blogs and hoping I can see those in quick time.
I can see members and application users considered as different entities. So this means licensing also will reflect this. So is there a way to make out how this is managed in licensing as I can see licensing always talks number of users and don't discriminate App users.

Hi Ravindra,
thanks for your comment. I also hope to release the next articles as soon as possible... 🙂
Licensing members is currently not an issue from my point of view as most users who are members usually already have an S-User and to my knowledge (don't quote me on this), additional S-Users are not charged by SAP (and if they were, you wouldn't need that many users as we are only talking about administrators, developers, and support users).
For application users which are provided from your internal corporate identity provider, there are no restrictions and no licensing constraints, same goes for a third party identity provider where, of course, your third party provider could charge you but SAP does not from a HCP perspective. Of course, if you use SCI, you'll be charged based on logons per month. For more licensing information concerning SCI, you can go to hcp.sap.com and download the Pricing PDF. Here, you also see what is charged normally per logon. Keep in mind: if your user logs in multiple times per day, this is only counted as ONE login. So the counter is increased once per day for each active user.
Best regards,
Jakob

What if you end your parts with the link to the next part. Yes, you have it at the beginning of this blog, but once one read through it you might not know that there is one more part. So having a link to the next one would be great,

i am reading your articles, and waiting for more. pls keep on!

is the 'member' commonly used in our doc? i heard of a lot of other terminologies, such as 'technical user', 'provider account', 'PaaS account' , are they the same concepts? is 'SaaS' account meaning application user?