In a Nutshell: SAP S/4HANA Finance 1605 and Fiori Apps

Back-end only deployment option requires following components to be installed:

Another and more popular option is to run SAP S/4HANA Finance Back End with Fiori UI: 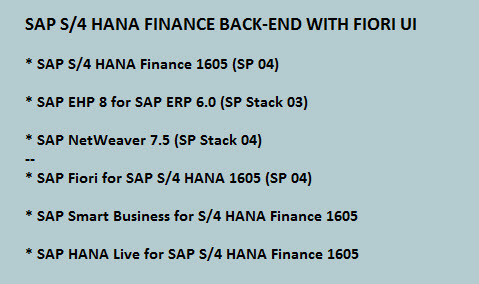 This option requires installation of the following components:

In this scenario you need to install the back-end components for SAP S/4HANA Finance. Also you need to decide whether you want to install the SAP Netweaver Gateway server on a separate server (hub deployment) or in the back end (local Gateway). Depending on your landscape and business requirements; you can run SAP S/4 HANA Finance backend with Fiori Frontend Server (FES) as a hub deployment; SAP MaxDB, Sybase ASE and HanaDB are all supported database systems in this case or you can run it as an embedded deployment on your S/4HANA Finance Backend and it will be running on HanaDB.

There are some Fiori app changes with SAP S/4 HANA Finance 1605. The entire structure of the Fiori Launchpad Content including its associated roles has been changed. Some of the Fiori apps (e.g. Check Cash Flow Items) have been renamed and some of them have been replaced with new apps. Several business catalog roles have also been replaced by newly introduced business roles. The most used SAPGUI transactions have been added to separate technical catalogs so that they can also be used from the Fiori Launchpad. It is now recommended to create your own catalogs based on your needs. For more details, you can have a look at SAP Note 2242596 regarding the changes in Fiori Content in S/4HANA Finance 1605.

If you are upgrading from S/4HANA Finance 1503; it is highly recommended to run the report /UI5/APP_INDEX_CALCULATE daily as a background job after the uograde. This job allows to retrieve and find the required indexing and caching mechanism for SAPUI5 applications, components, and libraries significantly faster compared to carrying out the calculations each time it is requested. Also, just to ensure UI2 caches are being flushed properly, it is recommended to run /UI2/INVALIDATE_GLOBAL_CACHES in “Execution Mode” once.

Apart from the activities specified above, the detailed installation steps differ depending on the UI technology used. For more information, see the “Implementation” documents of the apps.