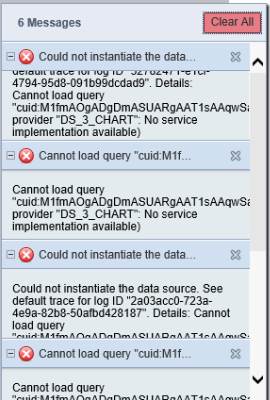 Tried the above solutions but the didnt help me solve the issue. Also got the reviewed  OLAP connection  scrupulously but everything seemed right.

Also tried executing the query of report in RSRT T-Code of BI to rule out any possibilities of Security issue and the query executed properly in BI system.

Later,  reviewed the authorization objects assigned to the user ID and also found nothing dubious but still we asked the security consultant to go over the roles again as it was clear after scrutinizing the dashboard, the OLAP connection and the BEx query that it had to be security issue.

When the security consultant reviewed the roles and it was later discovered that some authorization object was not assigned to the ID hence it was restricting the ID from accessing the data from BI system.

Following are the authorization objects that were assigned earlier when the issue was faced :-

So the major missing authorization object was the one that allowed for RFC that is S_RFC .

So, it can be said that due to improperly configuration of role the issue had persisted. Hence, due to no authorization RFC the ID couldn’t get the data from the BI system and display it the dashboard report running on BO server.
Hence assigning necessary authorization objects solved the issue.

You have pointed out good issues!! Appreciate!…Please keep posting like this…
I am beginner to Design Studio.Can u please share some Useful links so that I can learn more about it!!

Hello Akil,
I am glad you liked it. Thank you for your inputs.
Really appreciate it.
Also, the best place to start learning Design studio would be to go through the official product tutorials provided by SAP and creating your own scenarios and achieving those.
Also if you get stuck , the SAP community is always there to help out.