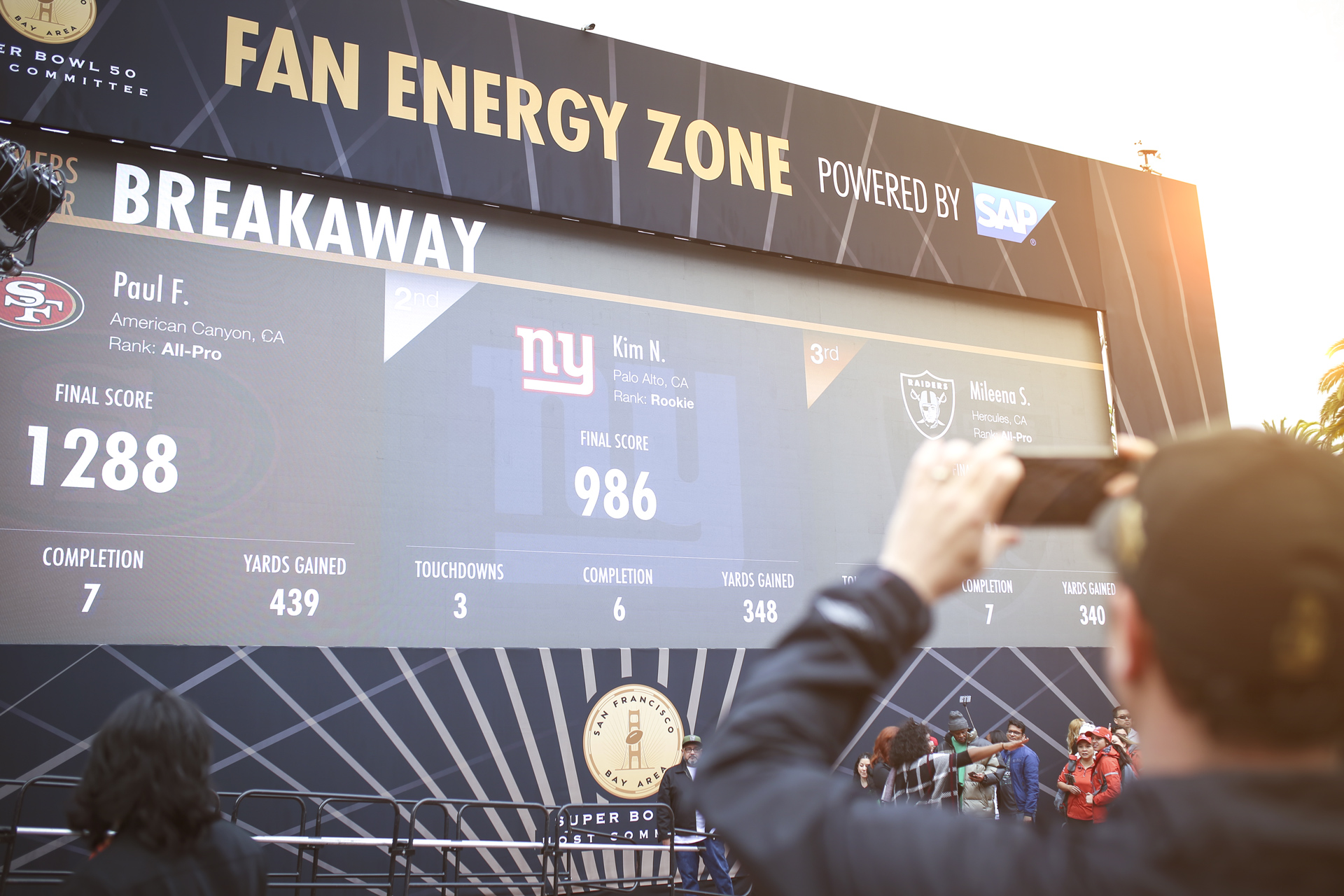 When San Francisco won the bid to host Super Bowl 50 the Host Committee wanted to have more content shared online than any Super Bowl in history. The SAP Design & Co-Innovation Center helped round out a holistic experience, marrying the physical and digital worlds.

For the first time in 30 years San Francisco won the bid to host the championship game of the National Football League (NFL); the Super Bowl. Further, the game on February 7, 2016, would be the 50th edition of the Super Bowl, its biggest milestone to date. The San Francisco Bay Area Super Bowl Host Committee had a number of goals in mind when planning this momentous event; giving more to the community and having more content shared online than any Super Bowl in history, and showcasing the best of the Bay Area’s culture and technology.

The Host Committee would accomplish these through a free-to-the-public fan village called Super Bowl City that would engage the whole community in the festivities instead of just the 70,000 lucky enough to go the game. With strong ties to the Bay Area, Levi’s Stadium, the San Francisco 49ers and the NFL, as well as a history of technological leadership, SAP was a natural choice for the Host Committee to partner with in developing the centerpiece activation of Super Bowl City.

The Fan Energy Zone powered by SAP consisted of three games for fans to play, one utilizing the Oculus Rift virtual reality headset and the other two using Kinect motion sensors. SAP’s Design & Co-Innovation Center was brought in to round out a holistic experience marrying the physical and digital worlds by creating individual player cards to highlight fan performances in the Super Bowl City app and designing ‘fan wall’ leaderboard content populated by the data of registered users for the 50’ outdoor display overlooking Justin Herman Plaza. 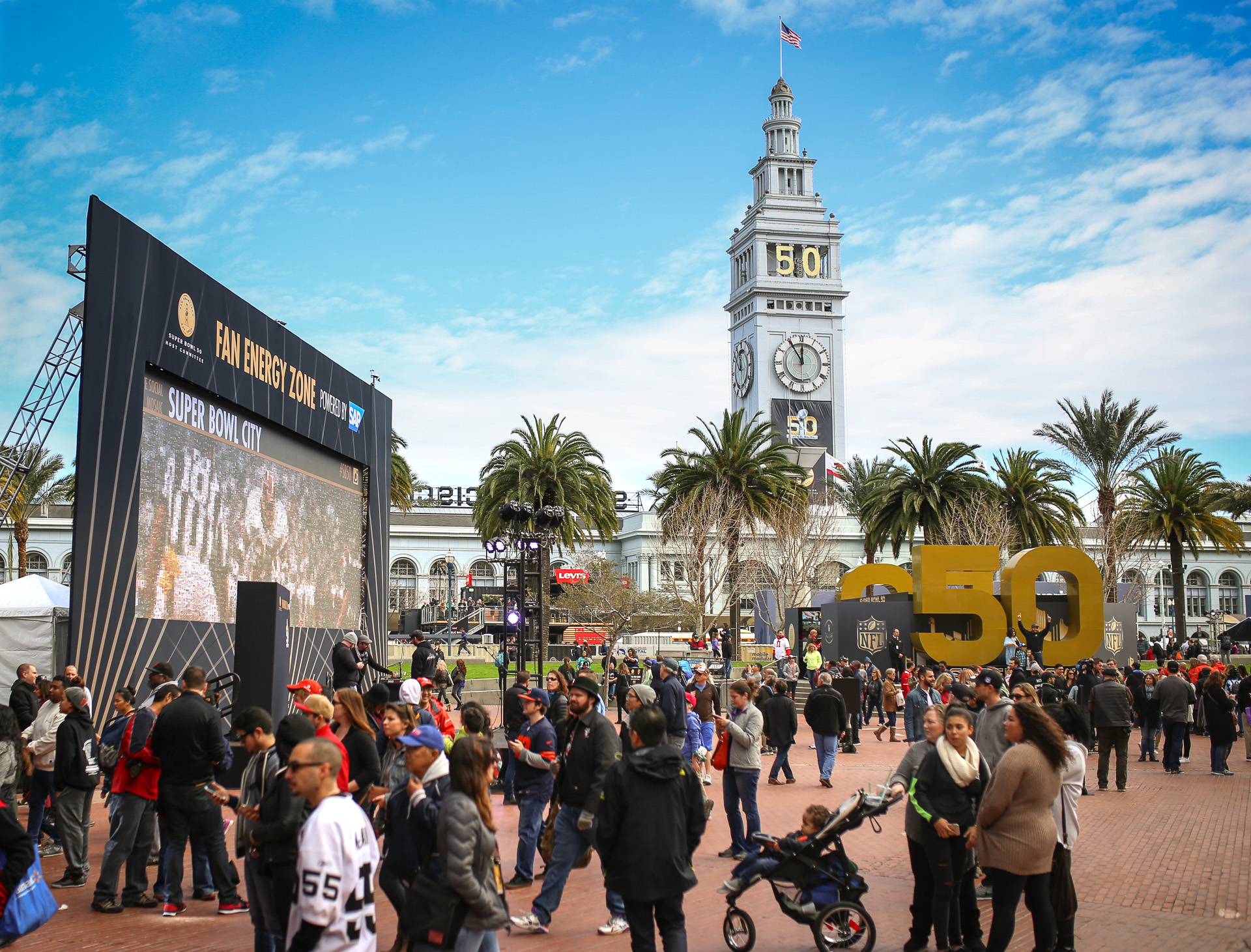 Discovering What is Meaningful to Fans and Partners

Matthew Glibbery and Jonathan Judal, User Experience Designers from SAP’s Design & Co-Innovation Center, spent two of the project’s six weeks learning what makes a fan-village experience engaging and exciting for the range of people who would spend time in Super Bowl City. They mapped these insights against the goals of the organizations involved in producing Super Bowl City as well as the limitations of the timeline and technology that would power the Fan Energy Zone, using this knowledge to create and prioritize ideas that would be desirable, viable, and feasible. Working quickly at a low fidelity, they put sketches of ideas in front of fans and the Host Committee early and often, improving each iteration through the feedback.

Understanding how, when and why a fan would be receiving a player card was crucial to ensuring that it would be meaningful to their experience. Conversations with fans revelead that there needed two parts to the player card; one highlighting the individual’s performance and another contextualizing it.

The 50’ fan wall presented a big opportunity to display content beyond game leaderboards that would reach a large audience of fans passing through the plaza. Matthew and Jonathan worked closely with the Host Committee and their partners to identify other key messages that could utilize the data being collected by SAP HANA. 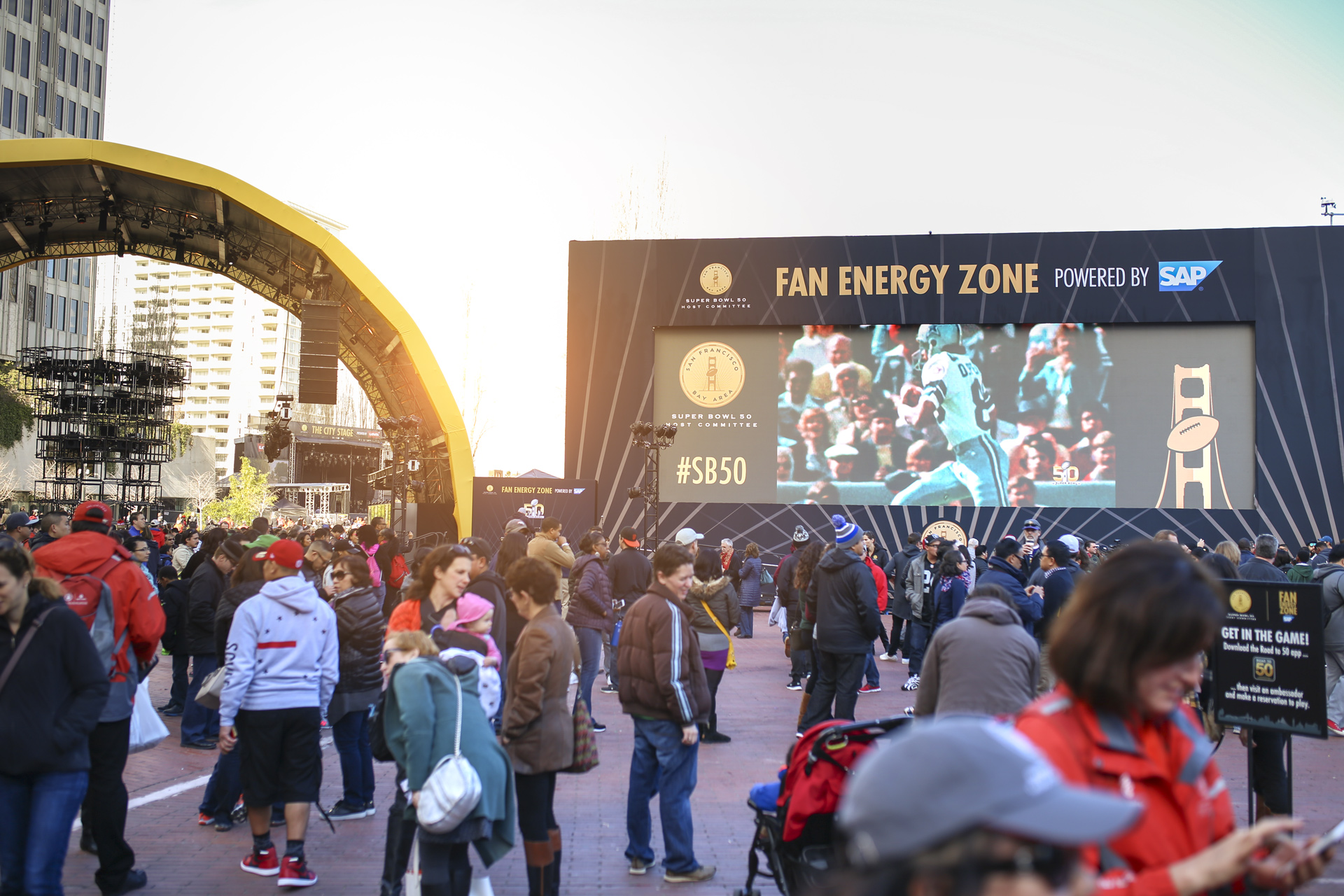 The final design of the player card featured a front and a back, similar to a traditional baseball card. Showcasing the player’s performance on the “front” of the card, there’s a focus on the shareability as something fans can only get by being there and having that experience, like keeping the ticket after going to a sporting event. The “back” of the player card utilizes the game data being captured to visualize and contextualize each fan’s performance against that of the other fans who have played the games.

“A HANA database instance was provisioned on HANA Cloud Platform (HCP). OData (Open Data Protocol) requests connected HCP and the Britelite Immersive’s game server, located onsite in downtown San Francisco, ultimately taking data from the games at the Fan Energy Zone and sending them to the cloud. The data was then processed and analyzed in real-time on HANA, producing player data and game analytic views that were sent to the large digital Fan Wall (in the Fan Energy Zone plaza) or the Player Card (on the Road to 50 Super Bowl mobile app)”, explains Ward Bullard, VP, Product Management and User Experience.

Throughout the day the fan wall would cycle through various content modes. There were of course overall leaderboards for each game, but adding a leaderboard for each game that just looks at the last hour created a good opportunity for fans to see themselves on the big screen while they were still in the plaza. The diversity of fan participation was highlighted by showing the countries, states and counties that fans represented, showing supporting evidence of the Host Committee’s goal to make this a Bay Area Super Bowl rather than a San Francisco Super Bowl.

“We wanted to design hero moments for fans and also give them the chance to see it, to be part of it,” recalls Matthew Glibbery. “Apart from that, we wanted to broadcast to the world what is happening at the Fan Energy Zone through live content. We also focused on the element of shareability within the Super Bowl mobile application enabling the fans to share their excitement on which ever social media channel they want.” In combination with the incredible games, the player cards and leaderboard content made heroes of fans and allowed them to share positive stories about Super Bowl City and the Bay Area, creating an unforgettable experience for the visitors to this year’s Super Bowl City.

“SAP is not only a partner, they played an integral role in helping us redefine the Super Bowl.” – Keith Bruce, CEO of the Super Bowl Host Committee

Thanks for sharing this story, Ann-Sofie! It's cool to see how SAP continues to innovate alongside the NFL, especially for the Super Bowl!