The Lord of the ODBC Drivers

Sometines, getting the BI Platform working with ODBC drivers feels like trying to make our way through Mordor. You get surrounded by error messages like “incompatible driver” or “a driver failed to load”.

Fear not, with a few tricks from friendly wizards, you can master such issues… and become The Lord of the ODBC Drivers.

The Shire, aka Windows

Microsoft designed ODBC, and as such, they do provide a comprehensive implementation for the Windows platform. It really does feel like “one Driver Manager to rule them all”.

Each release of Windows comes with a Microsoft-provided driver manager. As far as I know, it is the only ODBC driver manager available for this operating system, and all drivers play nicely with it.

Windows even ships a UI to manage ODBC drivers and DSNs, so things seem really simple. Any hobbit can master ODBC in that world. This looks too good to be true… and it is. With the rise of 64-bit platforms, Windows started shipping a 64-bit version of the operating system. Architectures cannot coexist inside a process, so everything in the Windows core now comes in two flavours: 32-bit and 64-bit. This applies to ODBC as well, so, just like the ring did belong to Bilbo and Frodo, there is now one 64-bit driver manager and one 32-bit driver manager. There is also a catch: every driver must be of the same architecture than the application that consumes it. A 32-bit application can only consume 32-bit ODBC drivers, a 64-bit application can only consume 64-bit drivers.

DSN configuration is, as before, performed in the ODBC control panel, except there are now 2 control panels: 32-bit and 64-bit. On Windows 10 they are easy to find: simply type “odbc” when opening the start menu, and the system finds them both, and marks them clearly. 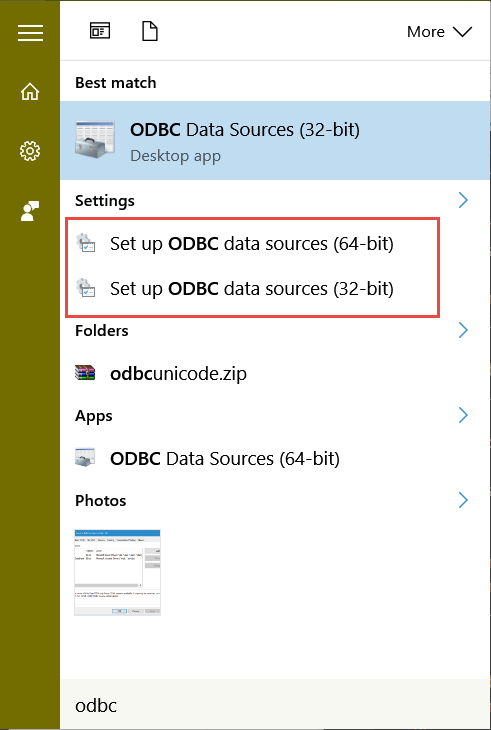 On earlier releases of Windows, things are a bit more confusing. The ODBC control panel icon in the Administrative tools refers to the 64-bit control panel. The 32-bit control panel must be launched manually, it is the odbcad32.exe program in c:\windows\SysWOW64 (don’t ask, the fact that the 32-bit version is in a folder named “64” is probably the works of one of Sauron’s sbires). 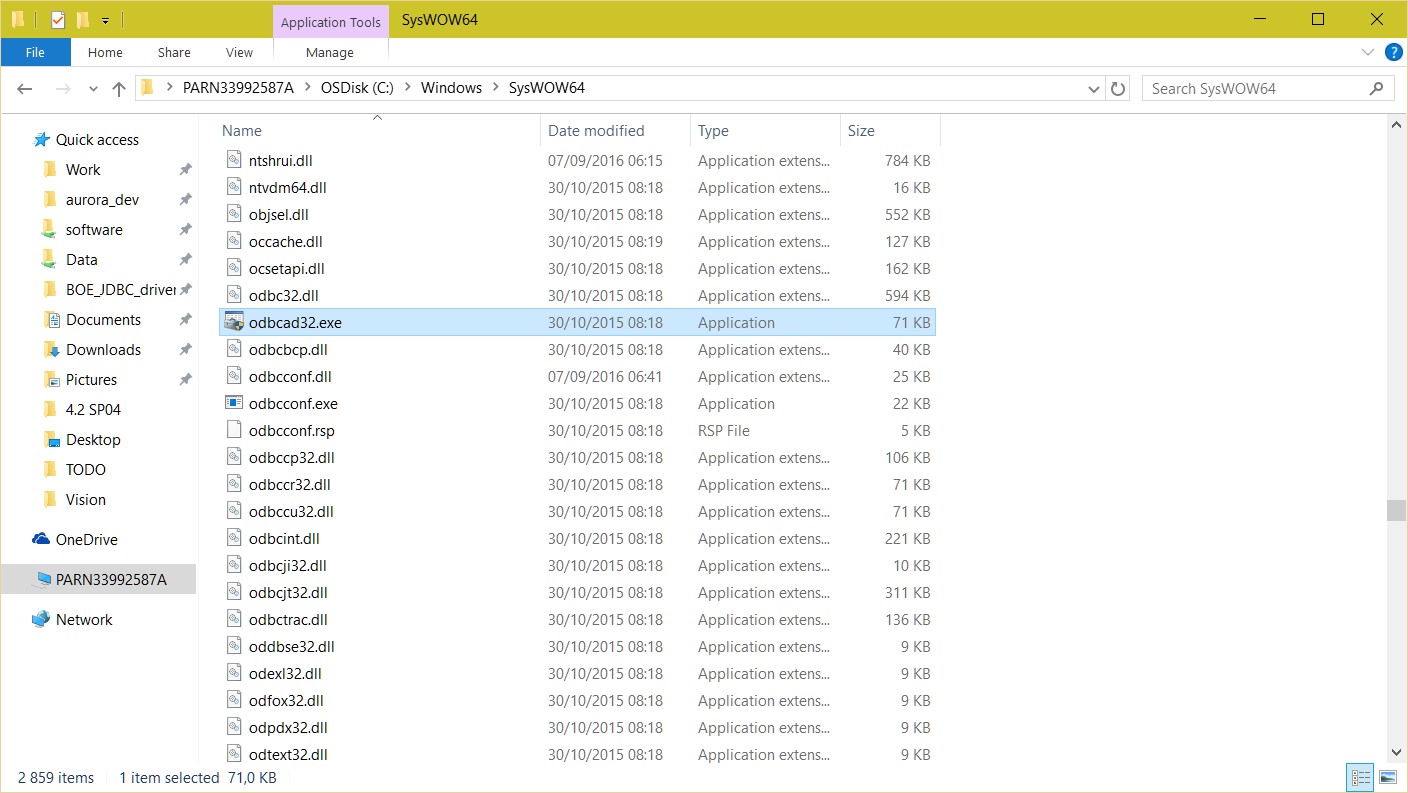 Welcome to the land where you are surrounded by command lines, environment variables, and error messages.

Since the operating system does not come with a driver manager, it will seach for one in the paths referenced in the LD_LIBRARY_PATH variable. The driver manager library is generally named libodbc.so.

So the first orc (hum… danger) resides in a missing driver manager. This is surfaced as an error message telling you that a database driver could not be loaded. To troubleshoot this, note the SAP BI driver name (generally libdbd_xxx.so), connect to your BOE server, fire up your magic bash, and…

You should get a list of dependent libraries, including a few missing dependencies, which confirms the error above.

Hopefully you (or your administrator) have already installed the desired middleware, let’s assume it resides in /opt/my_middleware. You need to identify the exact path to the libodbc.so file in that folder, using the find command if needed (find /opt/my_middleware -name “libodbc.so”). For the sake of the example, we will use /opt/my_middleware/lib.

The solution to the issue is then to change the LD_LIBRARY_PATH to have the system load your driver manager:

You can then check that the solution works by trying out the ldd_libdbd_xxx.so again. If all dependencies are resolved, restart your BOE server (./stopservers and then ./startservers), and let your users admire your wizardry.

The driver and driver manager may come from different (incompatible) versions/distributions, and in this case you would start getting error messages. This scenario is summarized in the schema below. 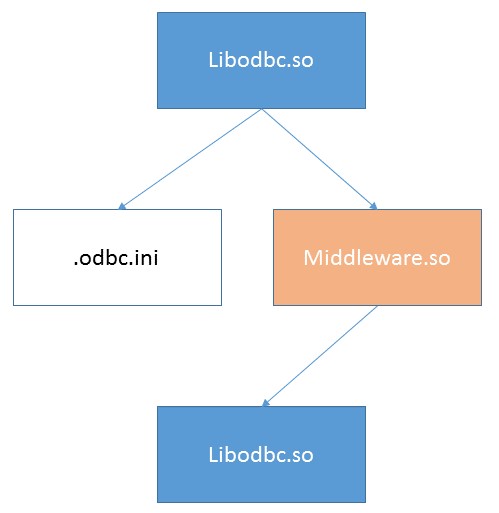 Diagnosis is pretty much the same as for the previous scenario: repeat the steps up to libdbd_xxx.so to assess that the ConnectionServer driver can load. Make a note of where libodbc.so is loaded from.
From the .odbc.ini, get the name of the actual ODBC driver that your connection uses. There should be a driver manager close to it, either shipped by the vendor or installed by your administrator. In a correct setup this driver manager must be the one that you identified in the previous step.

If this is not the case, the solution is, as before, to change the LD_LIBRARY_PATH to load the correct driver manager:

And again, restart your server and enjoy your newly-gained pover over ODBC!

As we have seen, ODBC is a great technology, and it is no surprise that those who created it (Microsoft) provided the implementation that is simplest to use. However, even though Unixes may seem like Mordor with their dark command lines, it can all make sense, and you can get it to work!

This article is the second one in my blog, and I would like this blog to be of use to you. As you may have gathered, my focus is on data access for the SAP BI products. If there are topics you would like discussed here, or exotic datasources you would like tried out (see my previous post on drill), please use the comments to let me know !

The other time that you need the 32- bit version of the ODBC drivers is when you're running "classic" Crystal reports (NOT Crystal for Enterprise!) in your BI Platform or Crystal Reports Server.  The servers that run these reports - CrystalReports201XJobServer, CrystalReports201XProcessingServer, and CrystalReports201XReportApplicationServer, currently are all 32-bit processes.