Connectivity News in AS ABAP 7.51

Now you can create ABAP Push Channels (APC) and specify APC applications (transaction SAPC) also in the ABAP Development Tools for Eclipse and so manage your APC applications without accessing a SAP GUI. 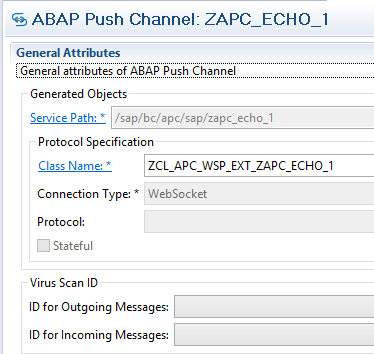 With Network Edge Authentication you get integrated, simple and secure Web access to backend systems of SAP solutions. SAP Web Dispatcher intercepts all incoming requests from the Internet and forwards only authenticated requests to backend systems in the internal network. Single sign-on and single log-off are provided for multiple independent backend systems including Fiori and SAP Enterprise Portal. A prerequisite for using Network Edge Authentication with SAP Web Dispatcher version 7.49 is a SAP Single Sign-On 3.0 SP1 installation.

HTTP/2 (originally named HTTP/2.0) is a major revision of the HTTP protocol used by the World Wide Web.  HTTP/2 reuses the HTTP1.1 (methods, status codes, semantics etc.) but focuses on end-user perceived performance by optimizing network and server resource usage. Major goal is to use one single connection from browsers to a Web site.

we have tried to call an HTTP/2 webservice using class cl_http_client from our NW 7.51 system. Unfortunately we did not find an option to use the HTTP/2 protocol version. Also in SM59 you can only use HTTP 1.0 and HTTP 1.1 for HTTP connections to other systems.

Is HTTP/2 only supported on the server side and not on the client side?

Thanks and best regards,
Oliver

yes, the HTTP/2 is only supported on the server side.

See above in the blog: "The SAP ABAP application server as well as the SAP Web Dispatcher support HTTP/2 in the HTTP server role with release 7.51..."

thanks for your reply. Must have missed that sentence.

I have ABAP 7.5 trial version - installed as mentioned in

How I can upgrade this to 7.51 trial version to try out new features

the AS ABAP 7.51 trial version is not available yet.

is the support for larger messages only available in 7.51 or also in 7.50?

I 'am trying out cds with odata service (annotations) on ABAP 750 ( with IDES)- When I activate the CDS I can see the view in SE11 but not the service in /IWFND/MAINT_SERVICE.

In eclipse I can see small blue icon next to the  @AbapCatalog.sqlViewNam but nothing against  @OData.publish: true.

How can I fix this.

your question doesn't relate to connectivity and any other blogs, please put it into the questions and answers section on SAP community with tag "ABAP Development".

Thanks - I have raises this in ABAP development - I had raise it here as I felt this was connectivity issue as some settings could be wrong and hence Odata was not created but the view was.

I have below questions.

re 1. HTTP/2 Push is dead. We have no plans of providing the feature any more.

re 2. HTTP/2 is not really bi-directional, it only supported push, which is not suitable for information transfer, just for pushing static resources into the browser cache.

However, WebSocket is a full duplex channel and supported by the ABAP server as part of the ABAP Push Channel (APC) technology. You could use it to implement something like you describe. We have currently no plans to offer such functionality out of the box.

re 3. The limit for concurrent streams over a single HTTP/2 connection in the ABAP server is 100, so the server will attempt to process the 100 requests in parallel. The same would happen if you opened 100 parallel connections.