SAP Inside Track Munich 2016 – a summary 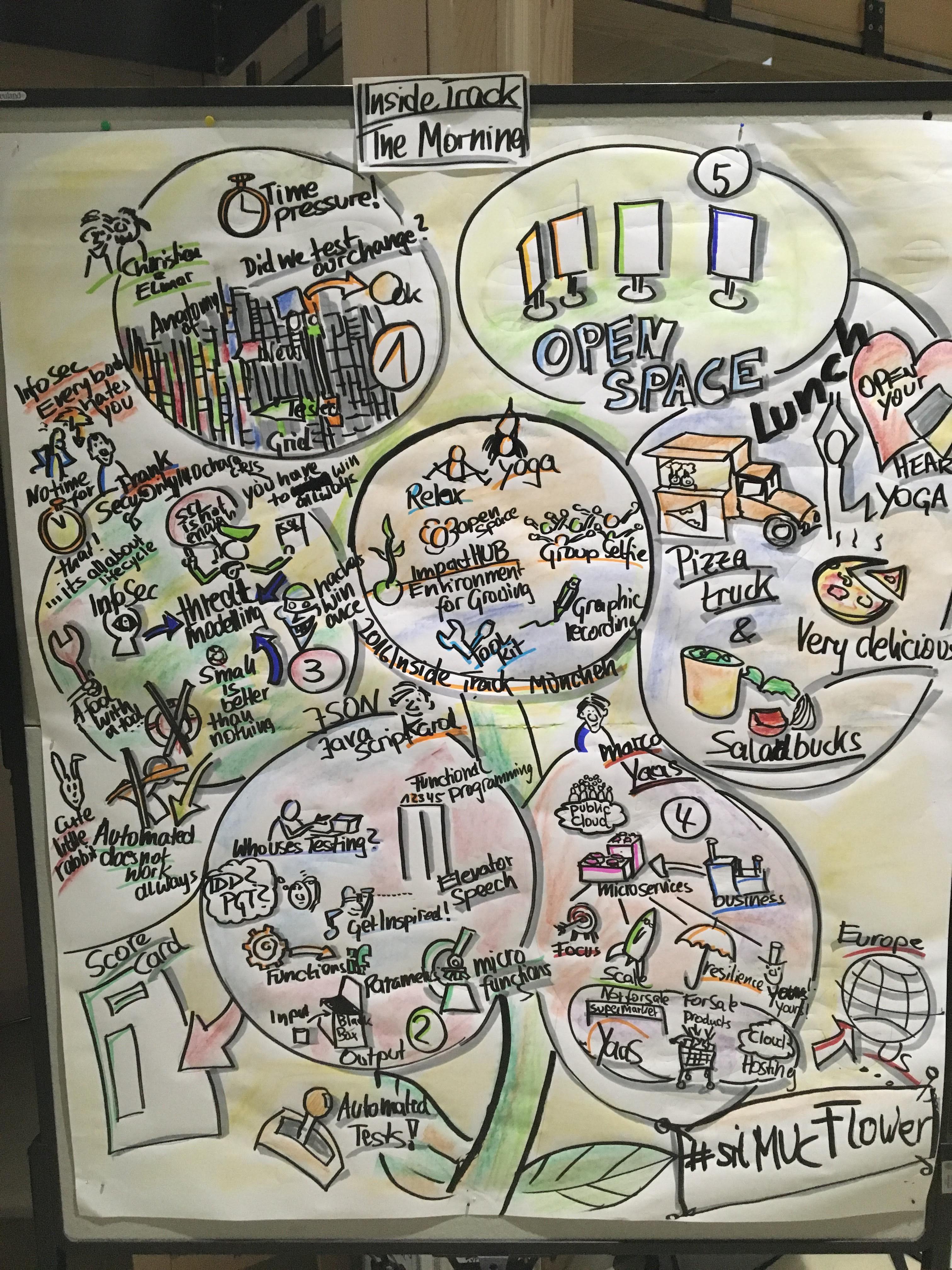 This years SAP Inside Track in Munich took place on Saturday, 8th of October 2016 – and from my point of view it was somehow special this year. It began this summer as Alexander von Löffelholz, Gregor Wolf, Mohammed Kadiri and Renald Wittwer started implementation of a registration application called „SITreg“ (read more about this great community project here) based on SAP HANA XSC on SAP HANA Cloud Platform. Beside the organizational tasks which every event brings with it we were glad to get the same exciting location as every year – we have been supporting the Impact HUB Munich since its start in 2013 so we were entitled to hold our event there as well  (thanks a lot to the Impact HUB Munich team) – if you haven’t seen it so far, have a short look at their website; it’s a great „startup garage environment“.

Moreover that we were really enthusiastic to get two non-techie special guests: Brigitte Felzmann (http://www.brigitte.yoga/) who did a short Business Yoga session after each lecture. For me personal it was a widening of my horizon, I always thought about doing something for my health during business but Brigitte showed to us, how easy it is. 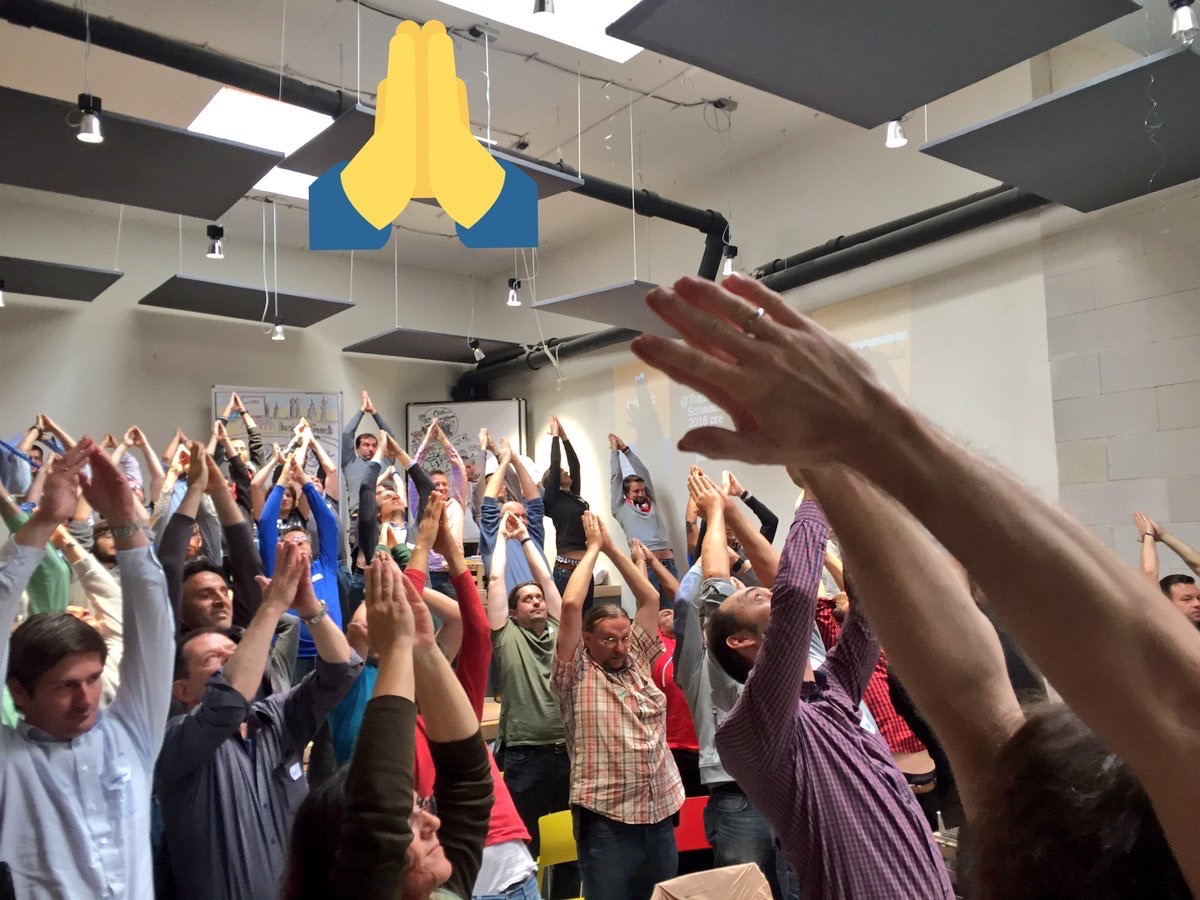 The second special guest was Mike Meister (http://mikemeister.de/) who did the graphic recording during the whole day! Thanks again to you, Mike for supporting our event in such a great way! There are a lot of photos to be found here:

Now some words to the technical part oft he event. This year the election of the sessions was really hard. We had a lot of great proposals but as we stick to have no parallel tracks here in Munich we had to chose. Thanks again to everybody for your proposals!

Did we test our changes? Test Gap Analysis with Teamscale

Christian and Elmar are already well known to the sitMUC family. In their session they emphasized the need of taking care for the software quality and architecture. With „Teamscale“ based on a project at the Technical University of Munich (TUM) you can keep track on this topic in an automated way. Take a look here in order to find out more about Teamscale. And also check out the slides.
A nice way to write testable JavaScript code

Also Karol has joined sitMUC already for the second time and did a great session about testing in the context of Java Script. He has put his slides here and learn about “Post Generated Tests, short PGT”.

Frank Köhntopp joined sitMUC for the first time and did a very entertaining session about Security. Still Tweets are restricted to 140 characters, so he used tweets to bring this often neglected and sophisticated topic to the audience. And it worked very well. Have a look here.

SAP Hybris as a Service – What is this microservices-based ecosystem?

Also a pleasure for us to have had Marco Dorn onboard with his lecture about an introduction to SAP Hybris as a Service on SAP HANA Cloud Platform (wow, a real long product name – I personally favorize the shorter one: YaaS).

The day before we had the YaaS SAP CodeJam as a “pre-event”. Marco blogged about it, have a look here.

We received a lot of great feedback about the „sitMUC Marketplace“ which we did last year. For 2016 we thought about doing something new as the Inside Track format is also a good environment for learning in using different formats and also a good chance to try something out. After our visit at SAP Hybris Summit (look here for further information) we decided to also adopt the open-space format and call it „sitMUC spaces“. The basic idea is to have an open slot within the agenda where everybody has the chance to participate and contribute. During the morning we collected topics which should be discussed during sitMUC spaces and finally the following topics made it:

Also for the second time in Munich we were very pleased to welcome Thomas Alexander Ritter. Two years ago he also joined and did a great „3rd wave of coffee“ session – this means, he brew special coffee for all attendees. Before doing that he described his way through the ELK stack (more information to be found here). Using the ELK stack for analyzing server logs (or any other files) is a convenient and feasible way. Based on his lecture (slides here) some participants already tried to do it the same way: 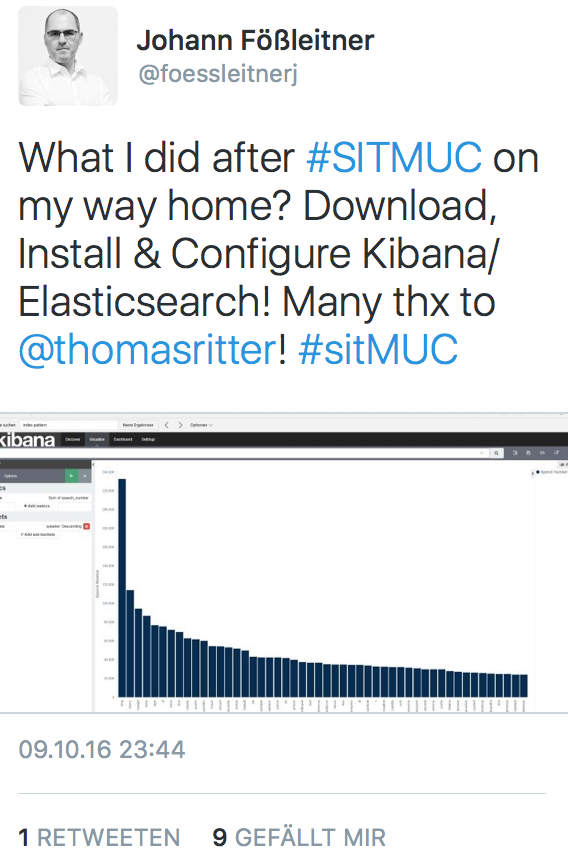 Bring your own language on HCP

Christian Drumm is already well known in the SAP ecosystem and also a familiar member of the sitMUC family as he also joined for the 3rd time. He described how easy it is to use Cloud Foundry on SAP HANA Cloud Platform to deploy applications with the so called „custom build pack“. It fitted perfectly to the topic of Marco’s lecture about YaaS. Here you can find his slides and maybe you find some time to try it yourself.

Christian Lechner is one of the latest new family members oft he SAP Mentors family (congratulations, Christian) and, of course also every year here in Munich for participating and contributing to the sitMUC event. This year he described the journey through the technology and support djungle of SAP HANA Cloud Platform. His lecture has also got attention outside oft he event. Check our his slides, it’s worth the time.

SAP Mentor Hendrik Neumann is also a well known member of the sitMUC family and gave us the chance to participate in his session about „git“ which is important to developers as also SAP is supporting this within their environments. During his talk he described the core of git within 30 minutes very well. Grab a coffee and have a look at his slides here.

Thanks again for everybody who joined sitMUC – a community event is nothing if nobody wants to contribute or nobody wants to attend. Also a “big thank you” to all our volunteers helping us (like Arndt Sieburg, Alexander von Löffelholz, Mario Drees) and, last but not least our families and friends who supported us and made the great cakes and cookies 🙂

This year we felt the great community vibe and also that the people are already familiar to each other – a big family.

Thanks for your kind words about my talk, it has been an honor to speak at #sitMUC!

#sitMUC is the most innovative of all SITs. Again you guys had some great ideas and were willing to try them out! Worked great 😀 Looking forward to see what's new in 2018 😉

thank you for your feedback. Hope you don't miss the 2017 edition.

Only if there will be something new to experience 😉