The Best Practices for Oil and Gas Conference – a collaboration between SAP, Eventful Conferences, and ASUG – started with a bang, as over 60 female and male colleagues came together at our first annual Women in Energy Reception. This inaugural event was sponsored and hosted by PwC, with Sondra Ruhman serving as a guest moderator. As she admitted upon introducing our panel, her task was made easy by the wealth of knowledge and talent present:

The stage was set by Sondra, highlighting a few eye-opening statistics from PwC’s 85th CEO Survey. Did you know that 40% of today’s global workforce are female, yet just 5% of global CEO positions are held by women? Or that only 14.2% of the top five leadership positions in S&P 500 companies are represented by females? (CNNMoney). Furthermore, PwC’s 18th Annual Global CEO Survey show that 85% of CEOs whose companies had a formal diversity and inclusion strategy said it had improved their bottom line, while also enhancing innovation, collaboration, customer satisfaction and talent attraction. With this in mind, our 1st Annual Women in Energy Reception was launched.

Below are a few highlights and abbreviated responses from our panel, which were of particular notice. 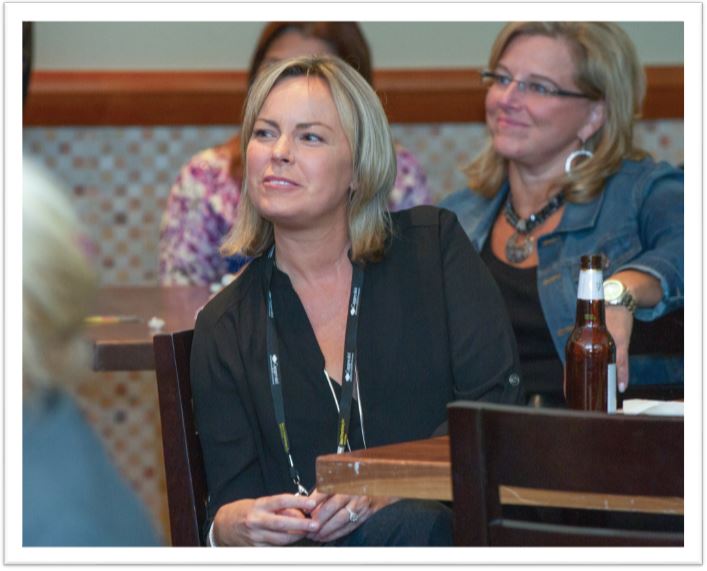 Sondra: “How do you have a life balance, or as I like to call it, a life in-balance; because admit it… we’re never going to be completely in control of everything!”

CIO: I’m incredibly passionate about what I do, and that’s key. If I get a call at home, it doesn’t feel like work… and vice versa, I’m never too busy at work where I can’t tend to my family.

Holly: How DO you do it? My life is crazy! There are times where I come into work 30 minutes late because my son can’t put his pants on, and that’s life. I went through my period of “mom guilt”, to be sure, but I’ve since learned to adapt… I don’t dwell on the opportunities I have to miss, and instead seek out opportunities I can make happen.

Sheri: I’ve had the same experiences as Holly, where I’m late to work because my youngest can’t get their shirt on… but I’ve found that it gives me a unique perspective and understanding as a manager of moms and dads who find themselves in the same position I once did.

Sondra: “What is the biggest obstacle you’ve had to overcome in the industry, particular to the fact that you’re female?”

CIO: First, I acknowledge that it’s certainly not industry specific… but there are so few women as you climb up the corporate ladder, and it’s difficult to have those initial conversations that we think, speak, and interact differently than our male counterparts. I’m lucky to have such a great boss in the CEO of Baker Hughes. I can vividly recall having a two hour conversation over breakfast, where I found the courage to have a conversation about it. You’re going to be different – play to that as a strength! It’s easy to resort to “they just don’t get it.” The biggest disservice I can do to Baker Hughes is become exactly like my male colleagues, because we lose the diversity that is so critical in success.

Holly: People come up with a hypothesis, and they come up with facts that support it… and I’ve found that the same applies for me. I can walk into a boardroom with all men, and immediately think “Male dominated. I’ll have no voice. They won’t listen.” But, I’ve since learned to flip that mindset.

Sheri: At first, I was afraid to show my empathy, my issues, my female perspective – because I wasn’t sure how it was perceived. But it’s now so obvious that men (and women!) can’t see all sides of the box. You need different perspectives to see the whole picture. I had a consultant once tell me, the thing that scares your male counterparts the most is when you’re quiet – because they don’t know what you’re thinking.” I’ll admit, there are times I use that to my advantage… but I will always encourage women in this industry to speak up – your voice is valued.

Other exchanges included beating male colleagues in fantasy football, a Mother’s Day gone wrong – made right, and how one panelist just knew she wanted to be a teacher – and now works in Oil! From funny stories to heartfelt trials… leadership advice, to empowering females – this panel had it all.

Thank you to all those who attended, and we look forward to seeing more faces at Best Practices for Oil & Gas 2017!

SAP Women Forward is a community dedicated to the advancement of women in the workplace.  Our goal is to advance women through peer support, mentoring, networking, and engaging our male peers in the conversation.

We invite you to join this forward motion by participating in our online discussion, live events and ongoing communications to break beyond traditional boundaries.