I have not had that much opportunity to work with SmartForms till very recently. I had already switched to Eclipse & ADT as my primary programming tool and thought I could get away this, not having to go back to SAPGui based development – and then I encounter SmartForms! I can’t even use normal day-to-day ABAP Editor tools, can’t use normal breakpoints, can’t do a where-used, several drill-throughs don’t work – what did I just get myself into!

After the first one that I volunteered making changes to, we realized I had to do one from scratch. Here is an opportunity – I moved all the code out to a class and called the class from within the SmartForm. This way I have all the tools that SAP & ABAP provide to work with code, I can use the ADT environment, test the data output independent of the SmartForm, use editor-based breakpoints, etc, etc…

Here is a step by step sample of a pick list printed from a warehouse transfer order.

When creating the SmartForm, create the layout and design as you normally would. The difference is in the code and declarations. First in the form interface, declare only the variables that are already available to the calling program. If the calling program does not already have the data, don’t bother collecting the data and passing it in – that is the job of the class. In this case, I have the warehouse and transfer order number. From this the class can get the data needed for the report.

In the global definitions, I have a single variable (OB_PICK_DATA) declared with reference to the class I have created. This is the variable that will be used throughout the SmartForm for access to data.

I also have a Field Symbol declared that will be used to get the line item details for the table LTAP.

And here is the only code that goes into the entire SmartForm! It is hard to imagine why anyone would want to put a break point here! 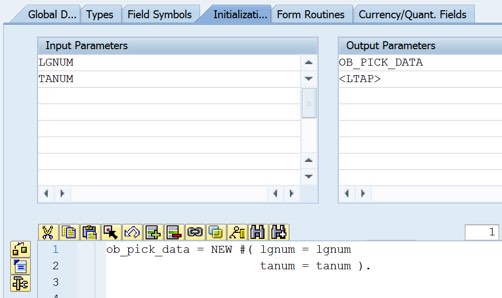 If you are writing this in pre-7.4 ABAP, you would write this as

Note that in the output parameters, there is also the field-symbol <LTAP> even though there is no data being set. This is prevent subsequent error / warning messages stating “Field <ltap>-matnr has no defined value“.

In the individual text elements, the data can be accessed from the attributes of the class directly or as an element of a structure. In this case, I have used…

For a tabular output itself, you have to reference the attribute as an internal table. In this case, OB_PICK_DATA->GI_LTAP is a table of Transfer Order Lines that I am assigning to the field-symbol <LTAP>. Another alternative here is to declare a Global Field and have the data going into it instead of assigning. If you want to avoid any variable on the SmartForm, you can create an attribute in the class and send the data to that variable. While this is possible, I feel that a field-symbol being a pointer is the most efficient way to access this data.

In the individual cells, you reference the field-symbol or local variable in this case instead of the object.

And step 3 – there is no step 3… just test and use! Another advantage that I have not used yet is that you could set up a test class so that you are covered for immediate testing as well as future regression testing. Try that with standard SmartForm code!

This is exactly the approach I adopted for my first SmartForm. Essentially a SmartForm should be viewed as a View, in the MVC pattern.

(Also, this is a good example of a blog - showing a good approach to a problem, based on personal experience).

Thank you Matthew. Since you probably have done this way more than I have... I do recall a post that there may be performance issues with calling a Class from a SmartForm (I can't find that post now, but if remember correctly, the class was used for a slightly different purpose). I personally have not had an issue with performance in the couple of forms I have done. Have you faced any issues, or do you happen to recall that performance discussion?

And prior to classes people used function modules.....

I am trying to use a classby adding clobal definition :

I am getting the error

TYPE REF TO not yet supported

Are you talking about using a local class?

and then where to put implementation, if I put definition in types

I also get "TYPE REF TO not yet supported".

Lahcen Babayi Did you succeed?