Time to extend the previous picture again (that itself extends the picture for ABAP 7.40). 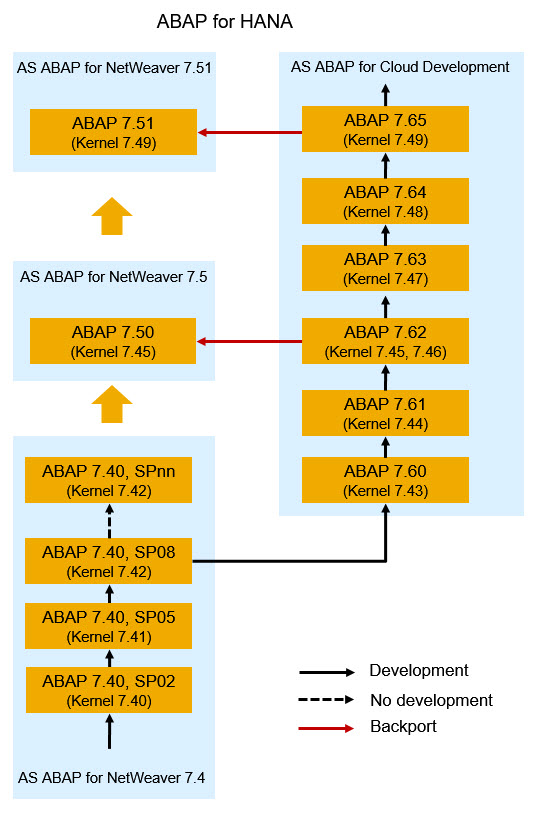 Releases for the 7.6x release line for SAP’s internal cloud development are continuously shipped in short cycles. After one year it was time for a backport of the accumulated changes of releases 7.63, 7.64, and 7.65  to the 7.5x-line again and here we are.

For 7.50 users, ABAP 7.51 is simply the direct successor of ABAP 7.50 that provides the ABAP Language and Runtime Environment for AS ABAP for NetWeaver 7.51.

As always, there is bunch of exciting ABAP news that I will publish in some upcoming blogs.

And again, for the big pictures, please look elsewhere. I’m only the ABAP docu guy …

"look elsewhere..." I'd like to, but could you precise the approximative direction? 😉

Will this be available in an ECC 6.0 system? I wonder at what point ABAP enhancements will only arrive in an S/4 HANA system...

Do I get ABAP 7.51 via another enhancement pack, or does it come via an ABAP/BASIS support stack?

The big pictures will be found here soon

As I understand it, from the Karl Kessler article about 7.51, this will not actually be an ABAP release that can be used in an ERP system. Is that correct?

It will be in an enhancement pack not yet created e.g. ECC 6.0 EHP9, or will it? Are there any plans?

Or is ECC dead now?

Did you get an answer? Is it possible to upgrade to NW 7.51 but remain on EHP 7?

yes this is possible.

I am still not clear with the comments. We have a scenario where our ECC is on EHP8/NW 7.5. Can we upgrade it to NW 7.51 ? Are there any clear SAP notes mentioning these details?

Thanks for sharing these information. Does this innovation packages of SAP Netweaver means that they are moving in to  new technologies like internet of things, SAP analytics on new HANA DB platform with Netweaver 751,752 and 753?

Traditional databases will be running on netweaver 750 SPS...???