This year SAP TechEd Bangalore edition gathered lot of IOT buzz because it happened right after prestigious SAP- Trenitalia event and SAP’s major global announcement about 2 Billion investments into IOT and off course midst of ongoing openSAP MOOC Imagine IoT . It’s also a super coincidence that Kevin Asthon – reputed as “Father of IoT “ who coined the terminology “Internet Of Things” was in Bangalore a day before SAP TechED, which gathered lot of attention in local media.  All these factors propelled the momentum and fueled interest among attendees of SAP TechEd Bangalore to understand what exactly is Internet of Things and SAP’s IOT story.

From enthusiastic speakers to the ever inquisitive and keen audience, everyone had an infectious level of enthusiasm, which set up the apt mood for the event.

An Event from IoT Lens

Apart from the keynote speeches, this year TechEd Bangalore edition witnessed 15+ lecture sessions on IOT including Strategy Talk By Srikanth Gopalakrishnan (VP, Digital Enterprise Assets, SAP) on how SAP is helping customers drive their digital transformation with IoT followed by couple of interviews one being with Srikanth on IoT Enabling the Intelligent Enterprise and other one with Clement Selvaraj (Chief Dev. Architect, IOT,SAP) interview on how reusable micro services help a developer to build IoT applications in HANA Cloud Platform based on Cloud Foundry 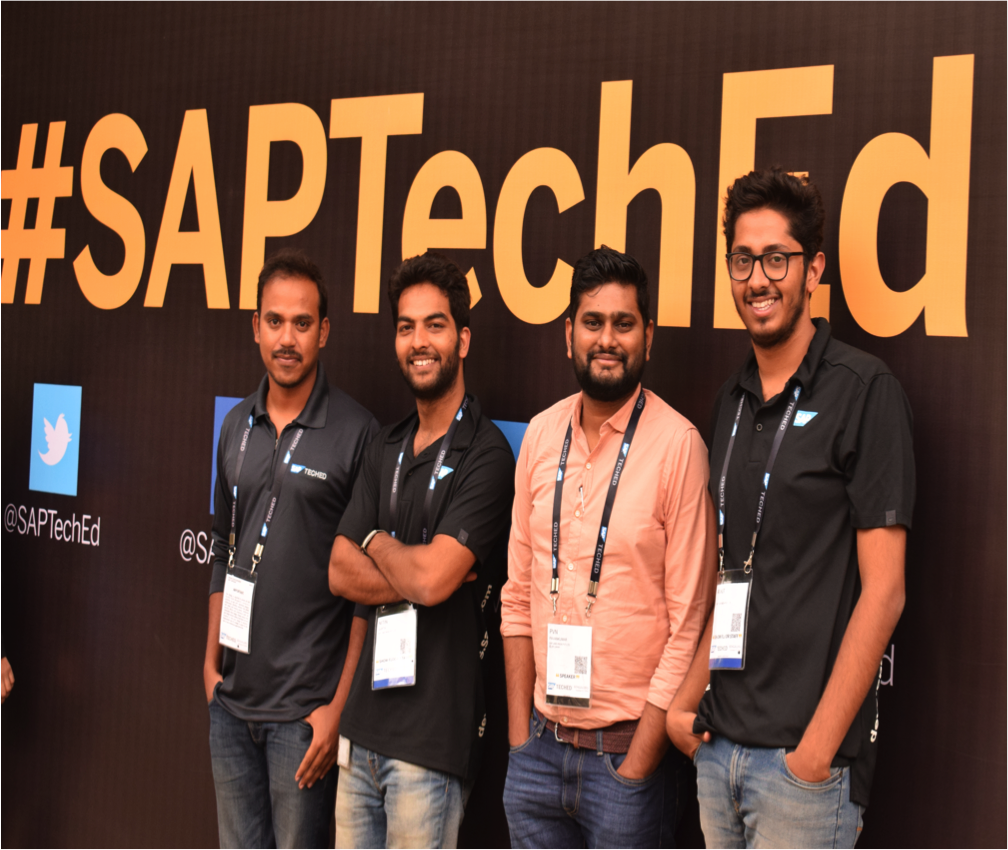 We from Smart Connected Business had a great representation at TechEd, Bangalore and here are some details –

Lecture sessions:
Statistics say that 9 out of 10 people are new to IoT, given the fact; I got the opportunity to talk on IoT made easy and how to Create IoT Apps for Smart Connected Business .It was easy for me to introduce myself as one of the team members of the ongoing popular (openSAP) MOOC “Imagine IOT”.

I started the session by setting up the context of IOT in Indian context, by taking the analogy of the Indian mythological character lord Krishna and compared his super powers and characteristics with the todays world of IOT – this was well received by audience and I plan to put a blog around the same in the coming days .In this lecture session, I did unlock the fundamental concepts behind IOT, sensor technologies and an introduction to design thinking and prototyping tools to build IOT apps

Immediately following this session was my next lecture session on the topic of Moving Exabytes is Expensive. This session talks about how big and expensive is the IOT data to capture and process in the cloud and how Lambda processing at Edge (where IOT data gets created) enables IOT scenarios to scale; and how SAP data components can help to deliver a holistic distributed data management platform.

There are lot of numbers and examples on my slide deck which say that IoT data is the order of magnitude of Exabytes!Best part of the whole session is the moment when majority of the participants photographed the data rich examples presented on the slide deck – Thanks to Former Member for orchestrating such examples!

Demo pods:
Its a privilege for all us to represent in one of the 3 IOT demo pods in TechEd area, we had a 3 day long demo pod titled SAP IoT Technology Innovations where in we got a chance to showcase the topics 1) SAP Connected Goods – an IoT solution born this August in SAP Digital Assets and IoT family and looking forward to celebrate its 2nd birthday this year .In short, SAP Connected Goods enables companies to Connect, Track, Monitor and Manage large number of smart connected high volume devices such as vending machines, coolers, coffee machines &others and transform them from a standalone device to a revenue generating asset .
2) SAP Dynamic Edge processing combines algorithms, syncing architecture, and customized database technology to allow businesses to process much of their IoT data locally, where it’s created and needing to be consumed, with syncing and central transmission occurring more securely, efficiently, and opportunistically. This reduces the amount of sensor data that has to be transmitted (and thus, the cost associated with data transmission) and allows for scenarios where data and insight is where you need it, when you need it.

Development colleagues from my team, Nitin Gupta, Former Member, Former Member did a great job in representing these topics at the demo pod; myself (PVN) and Ankit’s availability at the pod was limited. Overall we got a chance to interact with 100+ inquisitive visitors enquiring about generic product capabilities and applicability of these concepts to different Industries like Oil & Gas, Chemicals, Manufacturing and different partnership options to very specific questions like which message protocols are supported, how device on boarding takes place, what if someone takes the sensor out. And so on 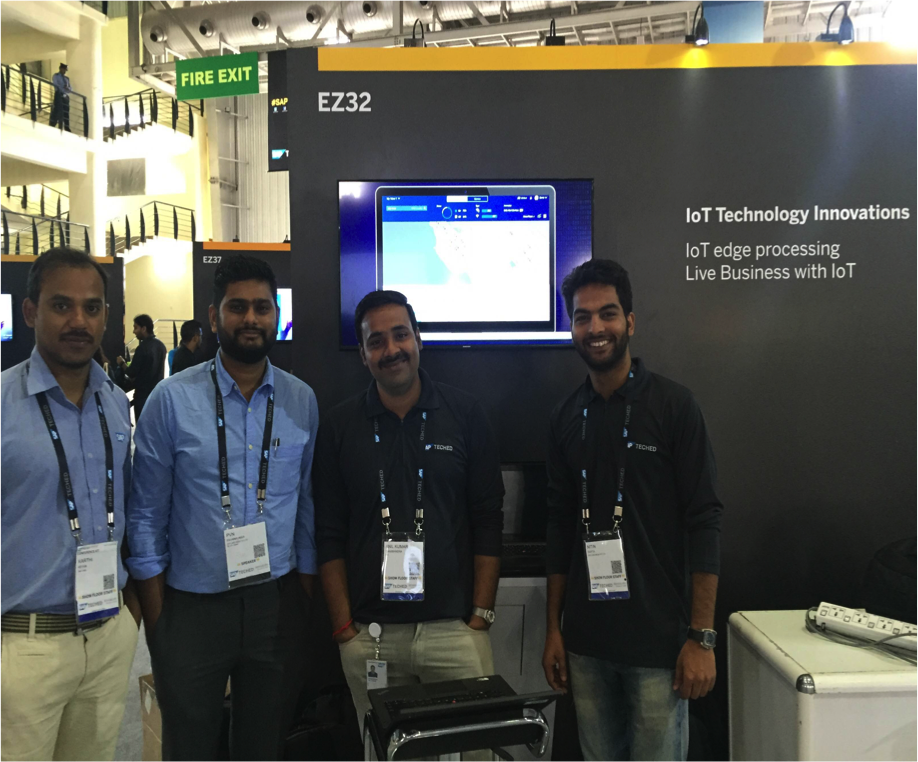 App Space and Smart Vending Machine – one region that was always jam-packed for all three days at the TechEd.

I am pretty confident that almost everyone came to the App Space to witness the Smart Vending Machine and complete a 10-tutorial challenge to vend gifts from the giant machine. The challenge included basic programming based questionnaire on HCP, HANA, IoT and SAPUI5. The number of submissions at the end of 3 days was 4,957, which was more than 2.5 times the count at Las Vegas. I must say Craig Cmehil and his team put up a tremendous show and being closely involved with the Smart Vending Machine. Ankit and Nitin from our team involved here too and were able to support 1000+ participants interacting with the Smart Vending machine

To conclude –  Looking forward to a more exciting TechEd next year … till then run connected like never before!!

The views expressed in this article are those of the author and may not reflect those of SAP.

Wonderful wrap-up for all IoT sessions Pavan ! It was truly Inspiring and Insightful session at TechEd Bangalore-2016. I had attended two Back to back sessions of yours on Day 3 (TEC110 followed by DMM108).   The way you explained IoT in such a simplistic approach, it will never erase from my mind. To cite few :
1.Human Analogy : Five Sensory Organs and its Correlation to IoT
2.Refrigerator example from Day to day life,
3.Telepathy-Lord Krsna analogy from Indian Mythology for IoT as Superpower
4.Retail Case study and many more. 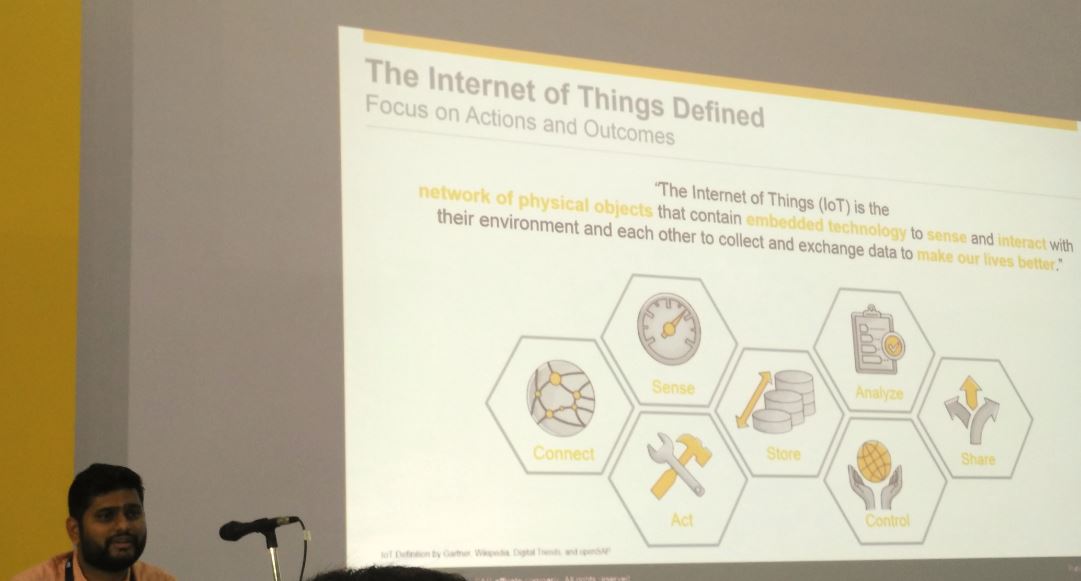 Looking forward to hear more IoT Stories from you !!!

hi Niladri,
Humbled to see your comments .. great to know that you enjoyed the sessions well.
Regards,Pavan

Looking forward to listen more from you and your Team's  blogs,articles..Stay Connected at https://people.sap.com/nirnayak !!  Can u please connect with me some body working on IoT Applications/Strories for Higher Education Sector ? I am preparing IoT based Discovery Stories for it