Data Visualization for Illicit Drug Use

According to Miller (2014), drug is “a substance other than food, that when inhaled, smoked, consumed, absorbed or patched on the skin or dissolved under the tongue causes a physiological change in the body”.

This report discusses the worldwide illicit drugs use by providing an overall view and analysis of data that has been collected from various sources. Nowadays, the most common drugs consumed are cocaine, cannabis, ecstasy, magic mushrooms, amphetamines, LSD, opioid medication, poppers, nitrous oxide, and ketamine (Hughes and Winstock, 2012).

The major effects of drug use includes loss of human lives and loss of productive years of a human life. In 2012, approximately 183,000 people died due to the overdose of drugs, which comes out to be 40 deaths per million (Lawn et. Al., 2014). The expansion of drugs use is big and as much as 16 million to 39 million people are either drug users or dependent on drugs for their disorders (Lawn et. Al., 2014). 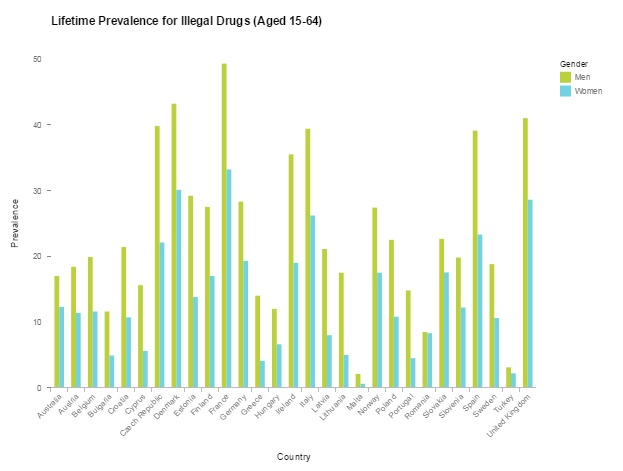 The graph in Figure 1 depicts the lifetime prevalence for illegal drugs for people in the age group ranging from 15 to 64 years in different countries. In this graph,lifetime prevalence means the percentage of people in each country who have used any type of drugs in any part of their life. According to the data, in all of the countries accounted men are more prone to use drugs than women, which infers that gender is a relevant variable to be considered in this analysis. The country with the biggest difference in prevalence between the two genders is the Czech Republic (difference of 17.7). On the other hand, the country with smallest difference is Romania (difference of 2.0). However, according to the graph,the prevalence varies for different countries, from which we can infer that cultural aspects also have an impact on the use of drugs. Moreover, the country that has the highest prevalence is France (49.30 for men and 33.20 for women) and the one with the lowest is Malta (2.1 for men and 0.6 for women). 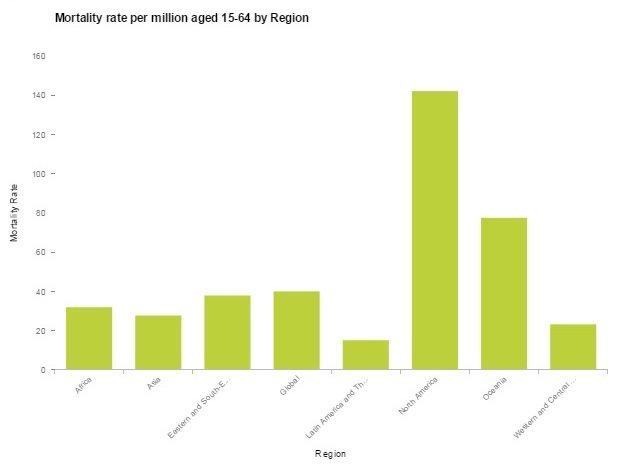 This graph in Figure 2 gives us the detailed data of mortality rate per million people aged between 15 and 64 years, in various locations. The data for Europe (Eastern, Western, South-eastern and central) and North America is accurate whereas the data for other regions is estimated from the best lower and upper estimates. The global average rate is 40.0 and only two countries, Oceania and North America, have values higher than the average: 77.5 for Oceania and 142.1 for North America. The lowest mortality rate is of 15.10 in the region of Latin America and the Caribbean. 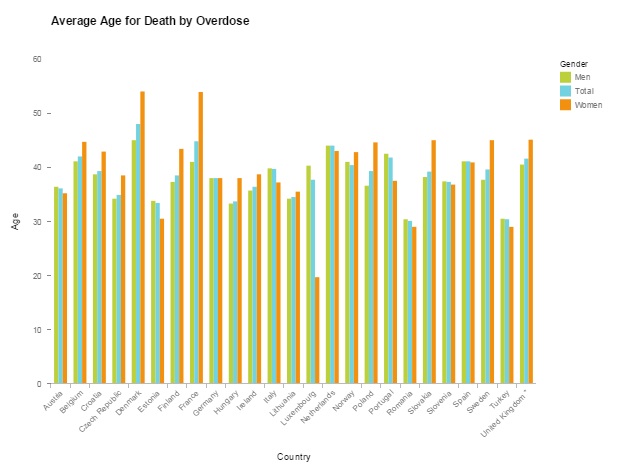 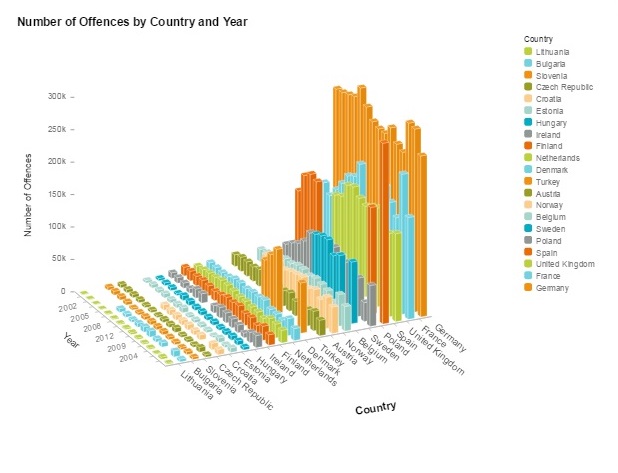 Figure 4: Number of Offences by Country and Year (SAP Lumira)

The graph in Figure 4 shows the number of drug-related offences by country and year. Six countries have the highest numbers: Sweden, Poland, Spain, the United Kingdom, France and Germany, in an ascending order. The numbers in Germany are extremely high in comparison with some other countries. However, from 2004 to 2007, Spain had a raise leap in the number of offences and reached numbers as high as Germany’s. The country with the lowest number of offences is Lithuania. In 2007, Germany had 143 times more drug-related offences than Lithuania. The difference is tremendous. 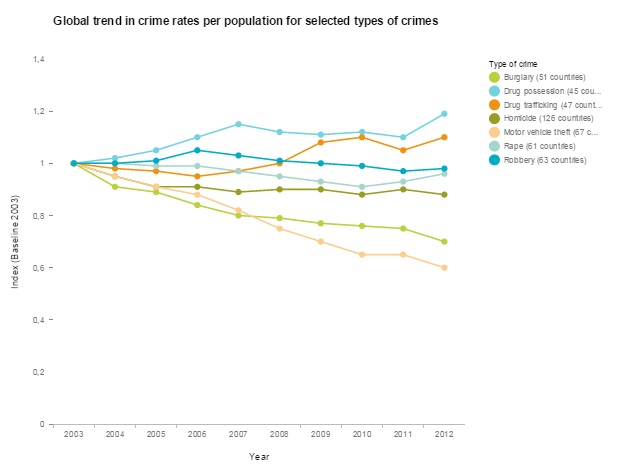 This graph (Figure 5) shows the comparison between different global drug-related crime rates per year. The year of 2003 is used as a baseline. Robbery and rape rates had some variation but were relatively stable throughout the years while homicide, burglary and motor vehicle theft rates have decayed. However, drug trafficking and drug possession rates have raised. This may be an indicator that, although more people are consuming drugs, this consumption does not implicate in new crimes (other than the obvious buying and selling drugs crimes). This is one of the arguments used by people who are in favor of the legalization and regulation of drugs who claim that the prohibition of drugs only increases the black market. This graph (Figure 6) shows the level of harm reduction services provided by different countries to people who inject drugs. The percentage of countries that report having a low coverage is higher than the percentage of countries that report having medium or high coverage in four out of the five services. This indicates that most countries don’t have a very strong health coverage for this group of people, which may lead to more deaths caused by AIDS and Hepatitis C. And not only these people who use inject able drugs are affected by this lack of health coverage as it also contributes to the spread of those diseases among people who are not drug users.

To conclude, it is important for all in the world to cooperate in eradicating this problem of drugs by sharing and analyzing data, addressing the challenges, finding ways to deal with this problem.

Freeman, T.P. and Winstock, A.R., 2015. Examining the profile of high-potency cannabis and its association with severity of cannabis dependence. Psychological medicine,45(15), pp.3181-3189 .

Lawn, W., Barratt, M., Williams, M., Horne, A. and Winstock, A., 2014. The NBOMe hallucinogenic drug series: patterns of use, characteristics of users and self-reported effects in a large international sample. Journal of Psychopharmacology, 28(8), pp.780-788.

Uosukainen, H., Tacke, U. and Winstock, A.R., 2015. Self-reported prevalence of dependence of MDMA compared to cocaine, mephedrone and ketamine among a sample of recreational poly-drug users. International Journal of Drug Policy, 26(1), pp.78-83.

Winstock, A.R., Lawn, W., Deluca, P. and Borschmann, R., 2015. Methoxetamine: An early report on the motivations for use, effect profile and prevalence of use in a UK clubbing sample. Drug and alcohol review.