NOTE – You may still use these task lists for basic configurations in 1809 or lower, however, rapid activation method is preferred as described in note 2704570, following the architecture best practice for embedded S/4HANA deployments

If you have been working with Fiori technology for some time you will notice that currently it is easier to configure it than in earlier releases.

This is due to the implementation of configuration task lists in transaction STC01 which help perform all necessary configurations in an easy and simple manner and avoid as many errors as possible.

This blog will explain details around the usage of those task lists and on which server they should be executed.

When attempting to configure Fiori you first need to realize that there are different technologies involved, including:

Fortunately, you can easily perform all the required configurations using task lists.

Configuration of the SAP Fiori Infrastructure

Following is a table including the necessary task lists and where to execute them in order to perform the basic configurations to get the Fiori infrastructure up and running:

For detailed information on how to run these task lists refer to the Best Practices Guide MAA or the UI Technology Guides: 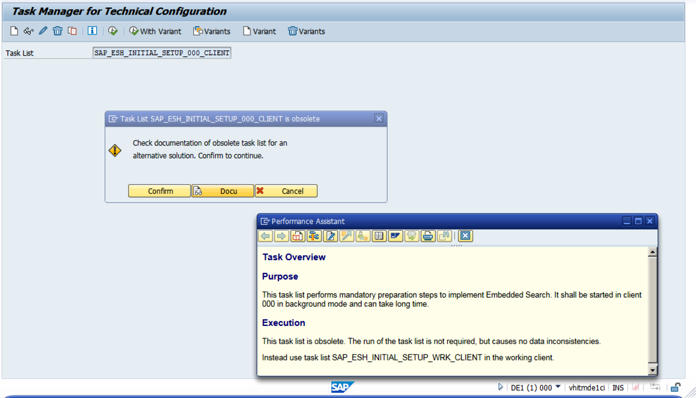 Following is a table including the necessary task lists and where to execute them in order to perform the app implementation. Notice that each application will also require specific functional configuration steps which should also be reviewed.

For detailed information on how to run these task lists refer to the Best Practices Guide MAD or the UI Technology Guides.You can find additional information about the functional configurations required per app in the Fiori Apps Reference Library, however the high-level steps to configure the app are shown in the following table which you can also find in the Best Practices Guide MAD:

Don’t know where to start? Try Getting Started with Documentation

Do you have any questions? Let us know in the comments section.

Interesting blog. Lots of valuable information. I like the last table consolidating the different aspects of automated procedures versus manual tasks.

Pleas keep up the good work! Really appreciate reading about it.

Maybe you can explore the following task in more detail "SAP_ESH_INITIAL_SETUP_WRK_CLIENT". I believe this is a crucial task that a lot of customers/partners have difficulties on accomplishing.

We are aware that some customers have had issues performing ESH activation. Fortunately, the required configuration steps are now clearly described in Best Practice Guide MAA. Overall, two task lists are needed for configuration:

While running this task list the most common issues are the ones we mention in the lessons learned post: SAP Fiori for S/4HANA – 10 Lessons Learned in S/4HANA 1511 projects  🙂

Great article, Jorge! You made my life a lot easier. 🙂

Thanks for this excellent blog!

I have the following question with regard to using the automated task lists. Suppose we use the automated task SAP_GATEWAY_ACTIVATE_ODATA_SERV to activate the required OData services in the development environment, is there any way we can add this to a transport request to move to the test environment? Or is it required to run the SAP_GATEWAY_ACTIVATE_ODATA_SERV task in the test and eventually in the production environment?

Our general recommendation is to run the task list per environment (DEV, QAS, PRD).

I understand sometimes following this recommendation is not always possible due to customer landscape requirements, but it is feasible to transport the Odata services activated by the task list.

These objects are generated as local objects for the user that ran the task list.

You can search these objects using transaction SE03 --> Change Object Directory Entries. Each of the activated services has 3 objects:

Make sure you add these objects to the TR so you won't have issues and note that the system alias assignment is not transported, hence you will need to run the task list to assign the system alias to the Odata service, so it may be easier to run the task list again as you already have the name of the active Odata services. If you don't have a list of active services you can use the abap program in this blog: https://blogs.sap.com/2017/11/30/fiori-for-s4hana-mass-odata-unassign/

Thanks a lot for your inputs Jorge! I will have the task list run in the individual environments (QAS and PRD) as per the recommendation.

I am quite confused - still. Maybe you can help me out. I was reading through different guides and also through this blog, but there are still some questions to be answered.

Currently I installed a Frontend Server 4.0 into a 1610 SPS04 system, so it is an embedded FES.

Now I am getting ready to configure the FES via task lists as stated above in this article. Questions here:

- How do I know precisely in which client the task list has to be executed? Yes, sometimes it is obviously (SAP_ESH_INITIAL_SETUP_000_CLIENT), but mostly to me it is not.

I appreciate your help and clarification 🙂