How to take advantage of the performance improvements in SAP Gateway in SAP NetWeaver 7.50 SP04

Since version 7.40 Gateway has become an integral part of SAP NetWeaver. With the release of SAP NetWeaver 7.50 SP04 we have taken the opportunity to use the latest capabilities of the stack to provide some fundamental performance optimizations to Gateway, such as using Simple Transformations for the rendering of the OData service response or the shared use of memory between different Gateway components.

The majority of changes made within the Gateway framework are implicitly used. This increases the speed of your application without the need for any additional configuration, independent from the SAP Gateway deployment scenario you are using.

If you are using Gateway in Embedded Deployment scenario in SAP NetWeaver on a central instance the performance optimizations are already active by default since the SAP Gateway backend framework and SAP hub framework components reside on one box. 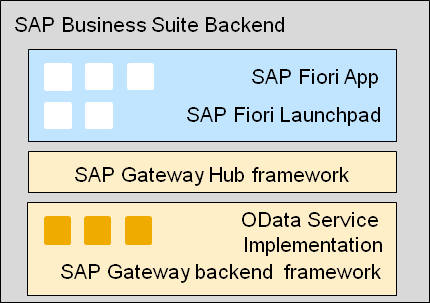 To enjoy the full benefits in a Central Hub Deployment architecture (see figure below) there are certain improvements which need to be customized explicitly and your backend has to be based on SAP NetWeaver 750 SP04 or higher. After completing the configurations described in this blog your hub system is acting in a special operating mode and will route most service requests to Gateway on the appropriate backend server and execute them there locally.

This is possible because the functionality of both the Gateway hub and the Gateway backend can now run “co-deployed” in the backend since both frameworks reside in the same software component SAP_GWFND.

In this operating mode the backend system for instance is capable to serialize the data response with a simple transformation, which will be performed much faster in the SAP NetWeaver kernel instead of ABAP. Those Simple Transformations are automatically created by SAP Gateway for most READ operations.

There you also find a troubleshooting section. ;-).

Please note:
The term “Micro Hub” does not indicate a new or different Gateway hub. It is merely the normal hub, only now it is configured to forward valid OData service requests immediately to the backend for further processing.

To compare the behaviour of the different deployment options

The service ZSALESORDER_HUB_SRV will be published on both the hub and the backend.

Step 2 ­­– Create and publish test service on the backend

If you press the button “Processing Mode” you can change the processing mode from “Routing-based” to “Co-deployed only”.

Since we have registered the service on the backend system we can also publish it on the hub using /n/WFND/MAINT_SERVICE on the hub.
As shown in the following screen shot we are registering the service for both system alias entries ODATA_ON_HUB and ODATA_ON_BACKEND.

If you have set up an OData service as described above most requests containing a READ operation on entity sets are going to benefit from the performance improvements.

The following requests, based on our demo service will illustrate the performance improvements.

As you can see in the URL there are two parameters appended. Firstly the specific content type “json” as this is a prerequisite for using the ST to work and secondly the access to the SAP Performance Statistics from the SAP Gateway framework (further information about sap-statistics and the different characteristics replied from the system can be found here: SAP Performance Statistics).

You can use the sap-processing-info header which is available in the HTTP response header to validate that the change you made are effecting your service.

The HTTP response header sap-processing-info is available to indicate the processing mode of a request. It includes the following flags:

So in the end an actual result including some statistic values and processing info confirm which optimizations are active and which portions of the service request were accelerated.

HINT: The actual numbers of the request will obviously vary for different hardware and services.

Response with Hub-Deployment (on the hub)

When I ran the following request in the SAP Gateway Client in the hub
/sap/opu/odata/SAP/ZSALESORDER_HUB_SRV;o=ODATA_ON_HUB/SalesOrderSet?$format=json&sap-statistics=true

I observed the following response:

Response with OData enablement on the backend (on the hub)

The response time is significantly faster. From the http header sap-processing-info it can be concluded that the OData processing was handeld on the backend (microhub=X) and that simple transformations could be leveraged on the backend as well (st=X). The codeployed flag is set as well since the processing in the backend is leveraging the co-deployed setup.

Response with co-deployment (on the backend)

I observed the following response:

which is slightly faster than Hub deplyoment with OData backend enablement.

It shows that simple transformation are used as well as co-deployment.

Response time using the “use micro hub” flag is not faster

One error that I stumbled on when I configured this setup was that I forgot to patch the kernel in my sandbox system. As a result I wasn’t able to observe a significant improvement in the processing times of my requests.

It turned out that no ST could be generated. This could be retrieved from the http header sap-processing-info (st=,) of the http response and from appropriate error messages in the SAP Gateway error log /n/iwbep/error_log in the backend system:

So it is mandatory to read the SAP Notes mentioned in the prerequisites section carefully since it is mentioned there to update the kernel ;-).

Service not published on the backend

If you have not published the service also on the backend the following error will be raised if you run the request using the system alias “ODATA_ON_BACKEND” that has the flag “use micro hub” flagged.

Thanks a lot for the clear instructions with evidence Andre. This will help us significantly in arriving at the optimal architecture for our Gateway implementation.

Can't wait to try this out in the system.

Thank you for such an informative blog.

Could you please let me know if above configuration works for Create/update Functionalities as well,If not what configuration needs to be done

Wow - thanks for the detailed and informative Blog! Will be very useful !

Thanks for the blog..

We have scenario of ODATA_ON_BACKEND( where we do only registration in HUB system) but when i try to  set the processing mode for the service as Co Deployed only . It throws error message  regarding Alias

But when I try to set local GW flag in System Alias with MicroHub checked  ,I get error of Invalid System Alias

Did you find a solution to that problem? I am also planning to setup co-deployment and would very much like to hear if you found a solution,

I have followed your instructions for a central hub setup, but i get this error: /IWFND/CM_COS064: No systemalias found for service "" and user "".

Service is created and activated in the backend, and i have removed the alias and set it to co-deplaoyed.

If i remove the MicroHub flag i do not get an error.

I followed your instructions for central hub setup.

When I run in gateway I am getting below error "No systemalias found for service “” and user “”."

It is not taking Co deployed , it is taking Routing based.

Service is created and activated in the backend, and i have removed the alias and set it to co-deployed. Could you please help?

I checked this and ran into the same issue.

It was working after I performed the following steps:

Now the error message was gone.

I have a query, If we add system alias in backend then why cannot we use backend directly to access ODATA , then what is the use of hub system?

Also with this kind of approach are we exposing backend  to external system?

You need a hub definitely if you want to use routing or multi origin scenarios.

Other than that you can go for embedded deployment.

See my above mentioned blog

If you miss Step 2, and just flag the system alias for OData on Backend, but not register the service on the backend in /IWFND/MAINT_SERVICE and/or maintain the routing for Co-deployed, you'll get a 403 Forbidden.

blog/oss notes(both our hub and back end systems are above 750 SP4, and noticed that the response time is more with micro hub option when compared with the earlier set up.

trying to troubleshoot the reason behind “st” not being set to x, here is what we verified, would you

suggest that we verify anything else apart from this?

As it turned out Micro Hub is unfortunately not always faster.

Have you checked SAP Note 2302549 - Performance optimizations for the SAP Fiori Stack https://launchpad.support.sap.com/#/notes/2302549?

$json has to be used and only certain query options are supported.

As mentioned in the note an OData request containing any of the following features does not benefit from the performance improvement of the simple transformation.