Our Senior Consultant, Yasmina Couty, has put together a great overview of the GB&Smith toolset we use to successfully migrate our clients’ SAP BO systems:

At Xoomworks BI we view the GB&Smith 360 suite of tools as administration intelligence for SAP BusinessObjects. Planning a BI 4.1 to 4.2 migration on the very large scale we undertook, requires simplifying complex tasks. We have experience using proprietary and add-on technology. We use collective expertise and technology to fill the gaps that inevitably occur when planning a complex task in a complex system.

Part of our preparation and planning is to work on the philosophy of maximum preparation to minimise execution. Working to simplify the tasks requiring interaction with SAP BusinessObjects CMC, and auditing and repository metadata. Built in tools are provided that can be difficult to execute, we used partners GB&Smith’s 360 suite add-on technology to make the process as efficient as possible.

SAP Migrations and upgrades are an important factor in leveraging an investment in BI. At Xoomworks BI, to deliver we require proven add-on technology. We undertake proofs of concept and use the tech that performs. Innovative solutions are often required and for our level of service, we need many hours work to be simplified to minutes. The 360 suite has in our usage delivered well. Installation is done within 30 minutes, the interface is easy to use with little training, and crucially the product owners provide us with solutions and new features on demand in a few days.

We used several of the 360 Suite modules during the large scale 4.1 to 4.2 migration for the key areas of Security, Content/Deltas, Connections, and Aliasing. We estimate using the 360 suite reduced our time to deliver by 30% for a complex migration. We used 360View, 360Plus, and 360Eyes. Had more time been available and the decision to use the 360Suite made earlier we estimate a further 70% time saving using the automated regression testing features versus manual testing. Setting up to automate all regression testing for future migrations is a project Xoomworks BI is currently completing.

Security is the most crucial and the most laborious part of a BI platform to design and maintain. Requirements by group, role, application, folder and every other object in the repository must be acquired, collated, and agreed by the business stakeholders. Moving from a legacy release of SAP BusinessObjects to BI 4.x incurs changes to the underlying model and every aspect must be reviewed. Our migration was BI 4.1 to 4.2, issues still arose and required every top level and lower levels to be checked.

We used the 360View module to generate security matrices by selecting roles and the associated folders. We could drill down in the web interface into specific permissions to discover CAL’s applied, and broken inheritance. Modifying the permissions were done without using the CMC, and with simple clicks. Documenting security was rapid by saving and exporting the output as an Excel spreadsheet reducing the SQL query load on the BI 4.x CMS.

The Excel spreadsheets are a cross table displaying inherited permissions and those specifically granted. 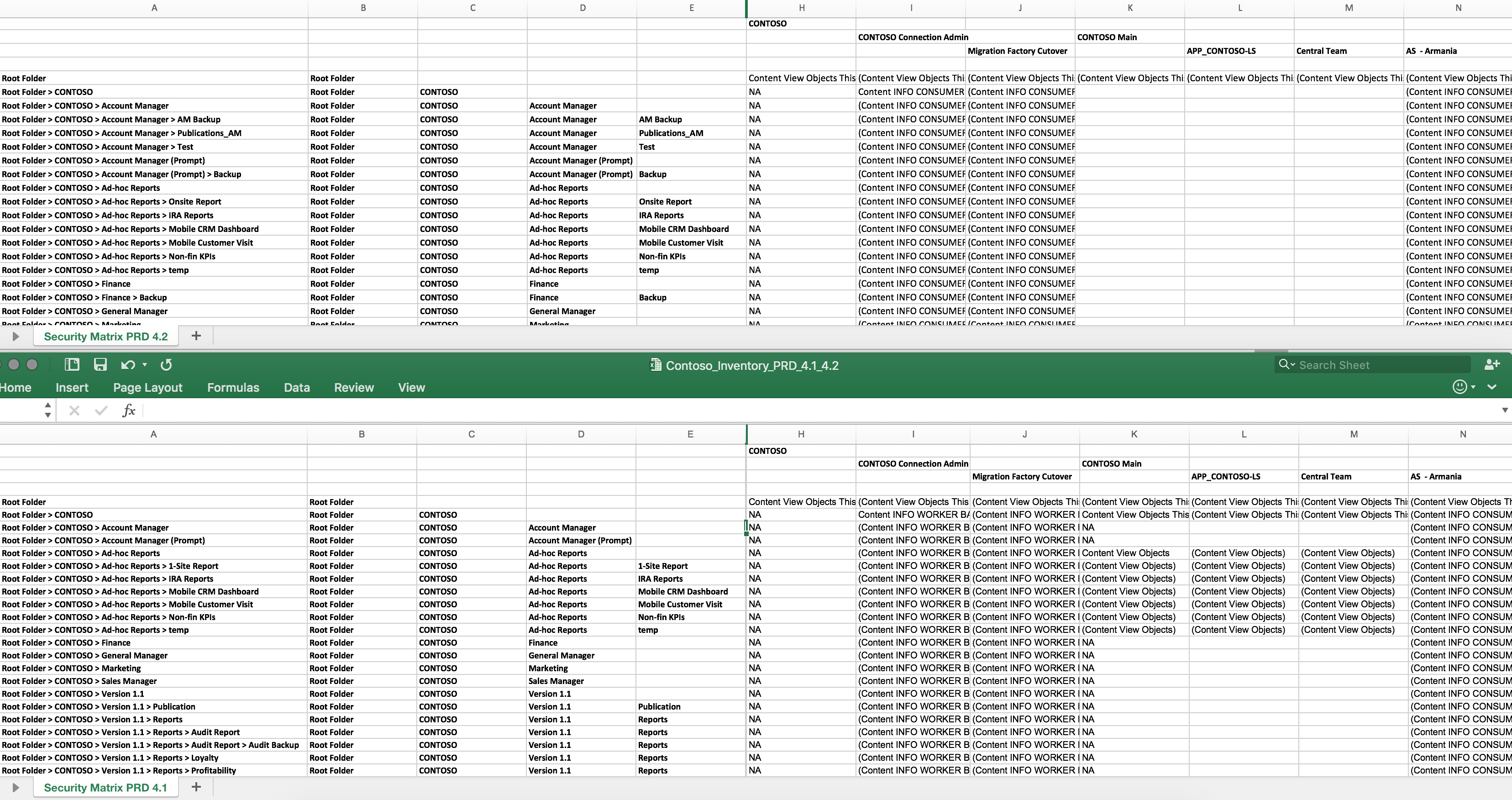 Using this format using a VLOOKUP function, a side by side comparison between systems can be further automated. Comparing security on folders and subfolders using 360View, allowed us to identify inconsistencies in applied security between environments and documentation within minutes. Using the tool’s Compare feature we took just over an hour to identify users amongst a total of 8,700 with inconsistent or differing CUIDs between systems. For Xoomworks BI using 360View, we re-migrated the accounts of inconsistent users with correct CUIDs. The task took 10 minutes and no personal reports were lost.

We used the 360Plus module’s Compare function to identify missing reports, universes, connections, users and groups, and deltas across all the landscapes. The Compare feature is applicable to the object name or CUID. Compare detects differences or similarities. The feature is run on demand or scheduled which is preferable for processing a large number of objects.

360Plus produces Excel spreadsheets allowing deltas to be quickly identified and selected for promotion. We completed the task in minutes as opposed to hours had we been querying the auditing database (assuming they had been set up properly.) Any content missing from the destination environment could be moved using a drag and drop. For the business stakeholders, this meant a reduction, if not an elimination of downtime for users due to missing content, and maintaining the integrity of daily reporting activities.

A change of database may require hundreds of working SAP BusinessObjects connections to be updated. For our large migration, 250 universe connections required updating to remain functional, mostly pointing to SAP BW.

We used the 360View module and some specially designed features from GB&Smith. One of the features using the RESTful API allowed us to update the connections as a batch job using one person in 15 minutes. We estimated without the feature the task would take three hours and require several people. The automation offered by the feature produced consistent connections across universes and no downtime in reporting activities. 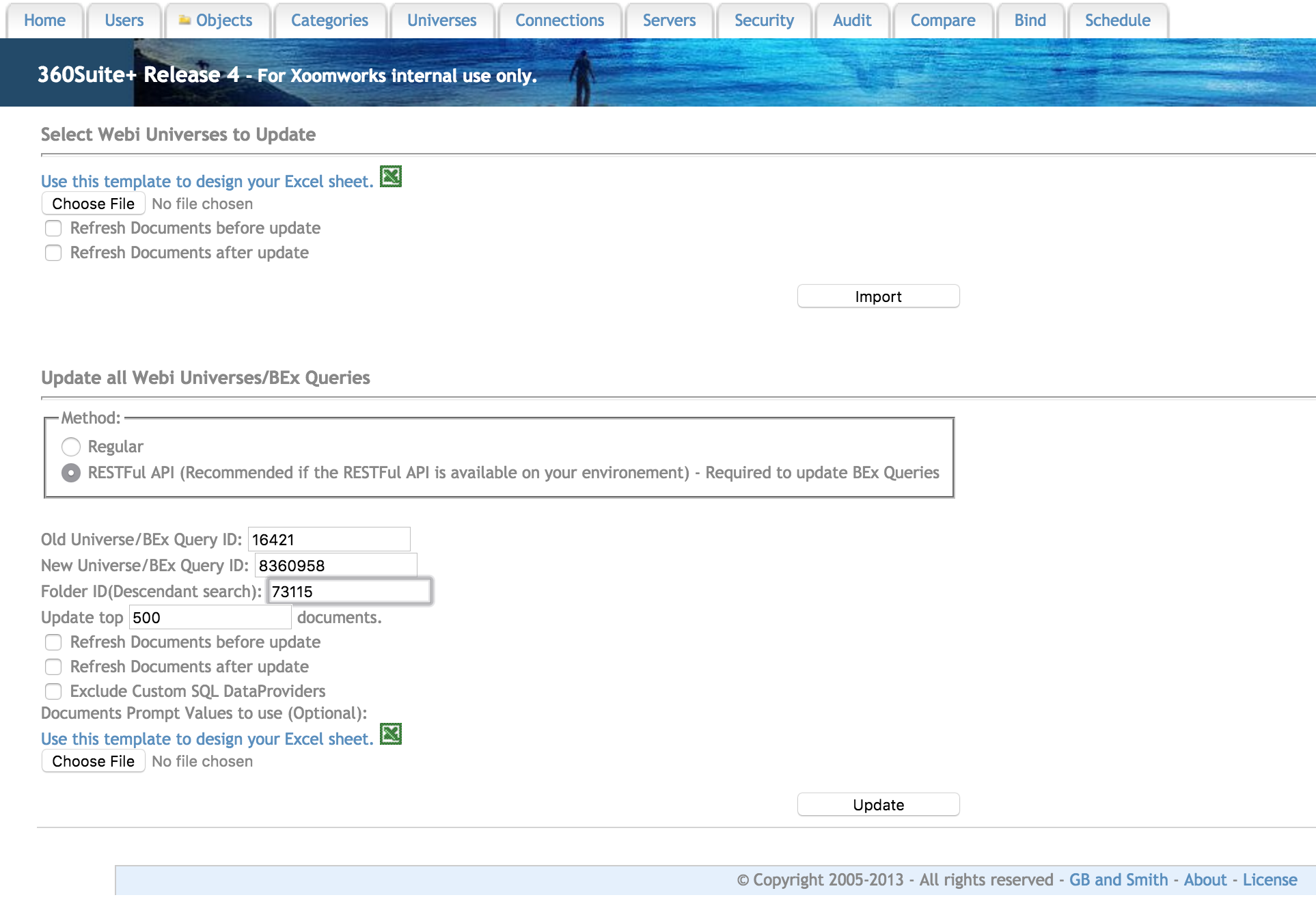 Another specially designed feature from GB&Smith enabled the updating of 100 Query as a Web Service (QaaWS) connections. Using 360View we accomplished the task via a batch job. The job updated an Excel spreadsheet output containing all editable information for the connections and re-importing them to update accordingly. The process was completed in 10 minutes and users were relieved of the burden to manually update every connection they used. This also removed the potential for introducing errors.

Updating the file system location for 1000 plus recurring instances and publications was another task using the same batch job principle. Using 360View, and updating Excel sheet output and re-importing it to update the Business Objects repository. This task also took 10 minutes and all existing and new schedules and publications were saved to the new file system directory correctly.

A major challenge is users with a different name than their Windows AD alias across multiple SAP BW systems, some based on HANA. At Xoomworks BI we have invested the human resource of our expert consultants and some bespoke SDK coding to overcome the challenge.

We used both 360View and 360Eyes during our large migration as an aid to aliasing. The modules visualise users, their properties, and group membership in a clear manner. The data can be imported and used to obtain their AD alias so the CN part could be stripped off to retain the SAP BW name. This name was then used to map the relevant roles. 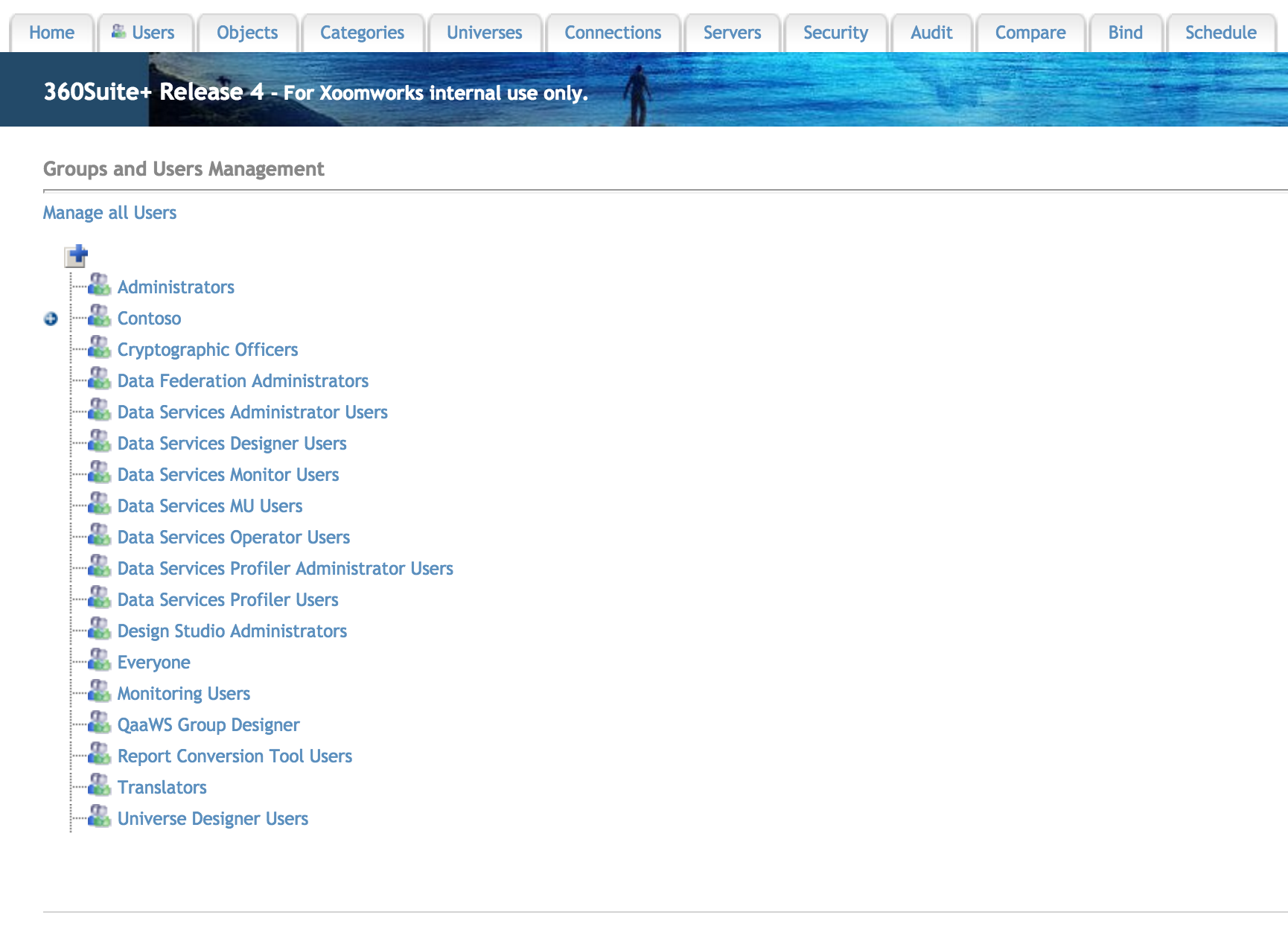 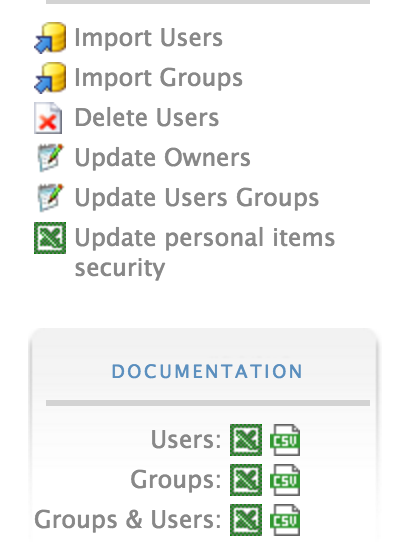 With 2000 plus users for a single project, Xoomworks BI found the ability using 360 Suite tools to export and gather the user information essential to deliver each sub-project on time.

For our large migration, we used three of GB&Smith’s modules. All the tasks were critical to the entire project and we estimated an overall time saving of 30% using the 360 Suite tools. The following are a small selection of the numerous functions we used to achieve tasks.

View afforded us a transparent overall and granular picture of SAP BusinessObjects security. We could compare security between versions to determine the changes. We assessed security for each and every sub-project going live ensuring the consistency of the security entitlements. We used security documentation as part of the sub-project migration sign-off.

360Plus to manage repository objects.

360Eyes for to explore and analyse metadata.

The automated regression testing features of the GB & Smith 360Suite were not set up due to time constraints and the late decision to use the 360Suite. Xoomworks BI is currently completing a project to set up automated regression testing for all future upgrades. An estimated 70% time saving can be achieved versus manual testing. The Suite generates reports on the tests performed on specific content, and the outcome of all differences. The output will allow comprehensive testing before migrating content, and generate a clear picture of the number of potential regressions to be fixed.

As an administrative tool and solution for SAP BusinessObjects GB&Smith’s 360 Suite of tools is the most comprehensive. In our experience, the suite of tools reduced our time for the very large migration by 30%. Producing data in editable Excel spreadsheets with 360 Suite and performing batch jobs has saved us time and reduced errors. GB&Smith’s 360 suite’s abilities are more extensive than reported here, their ability to customise solutions for their partners within days has proved critical to our successful delivery of projects.

Maximise preparation to minimise execution, and use the best technology and experience to cover the gaps that will surface during any BI migration. The 360 Suite has fulfilled this function well for Xoomworks BI.

For more information drop us a line or give us a call – your Xoomworks BI is here to help.