This year marks the 20th anniversary of SAP TechEd and the opening keynote by Bjorn Goerke (Executive VP and Head of Technology in Products and Innovation) was something I was especially looking forward to. Bjorn had set himself a very high standard to follow after last year’s keynote at TechEd in Barcelona (if you haven’t watched it I’d recommend you do), so part of me was a bit worried that nothing could equal last year. Fast forward 80 minutes and I felt my fears had been realised, in fact most of the week following I felt the same way, honestly I was disappointed. But was I right to be?

Others I spoke to (some far wiser than me) seemed more upbeat and positive about it so I went back and watched the recording and I have to say, they were right and I was wrong. Let me run you through the key points from Bjorn’s keynote and I think you’ll agree it was clever, packed full of information and well put together.

The show opened with images and audio from Mars, in retrospect this was linking back to last year and is a nice continuation on a theme, bringing us back to Las Vegas 2016. With lots of sound, smoke and lighting effects a 1980s DeLorean DMC-12 (the car from the “Back to the Future”) arrives on stage and Bjorn dressed up as Doc Brown climbs out. Bjorn then starts to paint the picture and sets the scene for us; he’s travelled back from the year 2036 and needs to harness enough energy to send himself “Back to the Future” and in doing so he is going to show us how and why we need to prepare ourselves and our companies for change and the digital future starting with S/4HANA.

Bjorn starts out by logging into the classic SAP R/3 system of the Nevada Energy grid and shows us a table that contains data about the amount of energy currently available from the grid (this will be important later). But this system is too old to help us get him and the DeLorean “Back to the Future” so we need to do something about it we need to innovate and the first step is to move to the new digital core, S/4HANA.

The message is clear “Transform yourself with S/4HANA and the digital core”. But how to get from where you are today to where you want to be on S/4HANA. Bjorn draws a neat comparison to moving house; “Should I take all that stuff with me? or is it time to clean house before I start moving”. He uses Maintenance Planner to start the clean up, then goes to the Software Update Manager (SUM) to start the conversion. Getting to S/4HANA is the first step in your digital transformation. Of course he doesn’t actually run a conversion (paint drying anyone?) but the idea is well presented and of course Bjorn points out that it won’t all be plain sailing – moving house never is.

So once you are on S/4HANA what then? Just run everything the way you always have? I guess you could but Bjorn goes on to explain that the agile place to innovate is in the cloud or more specifically for SAP that’s in the HANA Cloud Platform (HCP). There are 1000’s of APIs in S/4HANA and now Bjorn rolls up his sleeves gets his hands dirty by showing us how Core Data Services (CDS) is literally at the core of building these APIs. He shows us how to easily build Create, Read, Update, Delete (CRUD) enabled oData services and demos the new Drafts functionality easily by using annotations. He also demos how easy it is to publish a CDS view as oData service with just one line of code. Honestly it is pretty cool. If you’ve ever tried to create an oData service manually you will know how much effort is required without CDS.

Bjorn then shows us how to connect our new digital core to the HANA Cloud Platform (HCP) via the HANA Cloud Connector (all live on stage – kudos mate) and along the way he announces HCP Cloud Identity Provisioning is now available (honestly this was bit lost on me – but I’m sure my identity management colleagues will be excited).

So now that you have your S/4HANA digital core connected to the HANA Cloud Platform you of course will want to develop applications, so Bjorn shows us the WebIDE (SAP’s Development Environment in the Cloud) and how we can extended it now with our own plugins. Then true to form he jumps into WebIDE and live on stage creates a new UI5 application based on a Smart Template (now called Fiori Elements) that connects via the previously configured Cloud Connector back to our new S/4HANA system. Once the UI5 application is built he shows us the new draft feature and explains how people will be able to share and collaborate on objects and only commit to the database once it is ready (pretty nice feature). He then publishes this new app to the Fiori Launch Pad (Portal) on HCP. 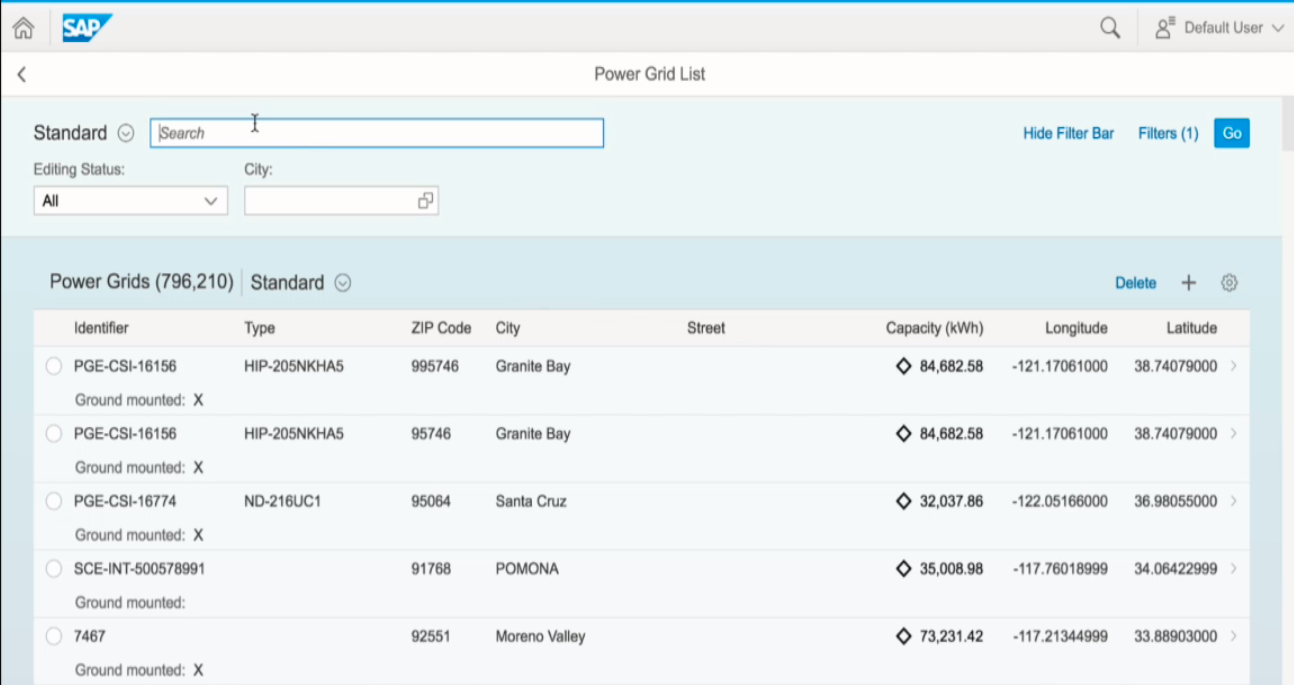 Next it was time to go mobile and with the new “Content to Go” mobile app, users can take information with them on their mobile device. By adding a “Card” to the “Deck” from the desktop version of an app – the information can auto-magically appear in the users’ mobile device. This was a nice segue into the recent SAP and Apple announcement saying that SAP want to provide the “best user experience” to business users. This partnership covers a number of areas, firstly a new Fiori/Apple design language bring together the best of both as well as a new Apple SDK to the ease the development of SAP based applications on iOS. Additionally, there will be a training academy. We can expect the first beta by the end of the year (I guess that’s not too far off now).

That’s already a heap of information… but Bjorn wasn’t finished… far from it, we still need to get him back to the year 2036…

Another important piece of the HCP is Smart Data Integration, after all you will need to combine core data with other big data (think IoT) or social media data and Smart Data Integration can help you do this. To get Doc Brown, I mean Bjorn back to 2036 we are going to combine some big data sets (Solar Panel installations) with our core data from S/4HANA so this bit is important.

Bjorn announced the “Thing Modeler” a tool that will be used to create digital twins of physical assets (released later this year). This is important for Doc to get back to the future because he needs to be able to model the solar panels hooked into the Nevada Energy grid and correlate that data with both the core energy data in S/4HANA and information about local points of interests (more on that in a minute).

So based on the modelled solar panels, Bjorn can create an IoT UI5 application using the WebIDE again to show the physical location of the solar panels… with a little more effort this basic application was enhanced to include the points of interest database for the USA so now Doc Goerke can find out which panels he can use to generate the energy he needs to send himself back to the future. Being a stand up citizen he of course doesn’t want to take down any hospitals or police stations or other critical public services and because the data has been correlated with the points of interest data he can easily choose the non feeding solar panels that won’t impact any important public services. When Bjorn starts pulling all this power from the solar panels some of them are going to fail, using HANA Cloud Integration Bjorn shows us how he can simulate the outages and trigger service requests to be raised in the C4C system. Unfortunately, this was the one part of the demo that really didn’t work – but like Bjorn said we were all ready for a beer anyway!

Alas all the energy currently available on the grid… it’s not quite enough energy to get back to the future, but here’s the best bit and an opportunity for some audience participation to boot! The audience have been asked to download the “Flux Inductor” app for their phone. This nifty little app is integrated into your devices gyroscope and the harder you shake it the more energy you will generate. This energy can also be harnessed to give us just enough to send Bjorn back to the future (hopefully).

So back to shaking our phones… SHAKE, SHAKE, SHAKE (definitely a missed opportunity for a Taylor Swift song). Bjorn shows us how using Business Objects Cloud we can visualize in real time the energy being generated by everyone’s phone.

But before Bjorn jumps back in the DeLorean, in a very Steve Job’s style, Bjorn announces “One more thing” … SAP HANA Express Edition. To be honest it felt like Bjorn maybe almost forgot to mention this, did he bury the lead? :-)… But HXE is sort of a big deal if you are a developer or system administrator, you can run it on your laptop up to 32GB for free to use for development and for production. It even includes a local version of the HANA Cloud Platform, so you can build all the demos Bjorn has shown using it! If you’re interested (and you should be) I recommend you read Graham Robinson’s blog posts on this topic.

12/10/2016: Correction – I have subsequently been told that HXE does not contain a local version of HCP, see comments below.

OK, so before the space-time continuum collapses in on itself it’s time to go. Bjorn jumps into the DeLorean, queue the smoke, lights and music and at exactly 88 miles per hour, thanks to a frenzy of shaking TechEd attendees he is sent back to the year 2036.

What you don’t get to see on the recording was what happened next. Bjorn reappeared on stage with the help of the SAP Fiori JAM band and rocked us out of the auditorium with some Back to the Future classics!

Honestly its quite amazing how much was squeezed into this keynote, my only criticism is perhaps it was too much(?), perhaps that’s why I left the auditorium feeling disappointed, I wasn’t actually disappointed I think I was just overloaded! That plus the jet lag and my brain couldn’t cope. That’s my excuse anyway and I’m sticking to it.

Finally, as Bjorn says you need to embrace change, there is a lot of stuff you need to understand these days. Innovation comes from collaboration. Doctor Goerke left us with this message:

“Your future isn’t written yet, nobody’s future is, it’s you who decide and you who creates your future, make it a good one!”

Thanks Simon for sharing detail flow of the Keynote…. After the keynote I was little bit confused why I need to connect to WEBIDE when I connected to HCP… Thanks for giving clarity on that..

I have used the CDS in S4HANA before keynote and really surprised with just 1 single line addition in the cds, it can be published as odata service thats really wonderful… (Need to thank the person who got that idea)…

But I would like to share one thing with you, you wrote: "It even includes a local version of the HANA Cloud Platform [...]". This is not true!

All the best,
Sven

Thanks for that clarification Sven.

I am sure I heard Bjorn say that but perhaps I misheard or he misspoke - I remember being surprised by that statement, so what you are saying makes me less surprised, I thought perhaps it was something new available due to Cloud Foundry or OpenStack capabilities. Maybe it is something for the future?