Do you know what we did last summer? Or what Internet-of-Ribbon-Cutting means in Moscow style. 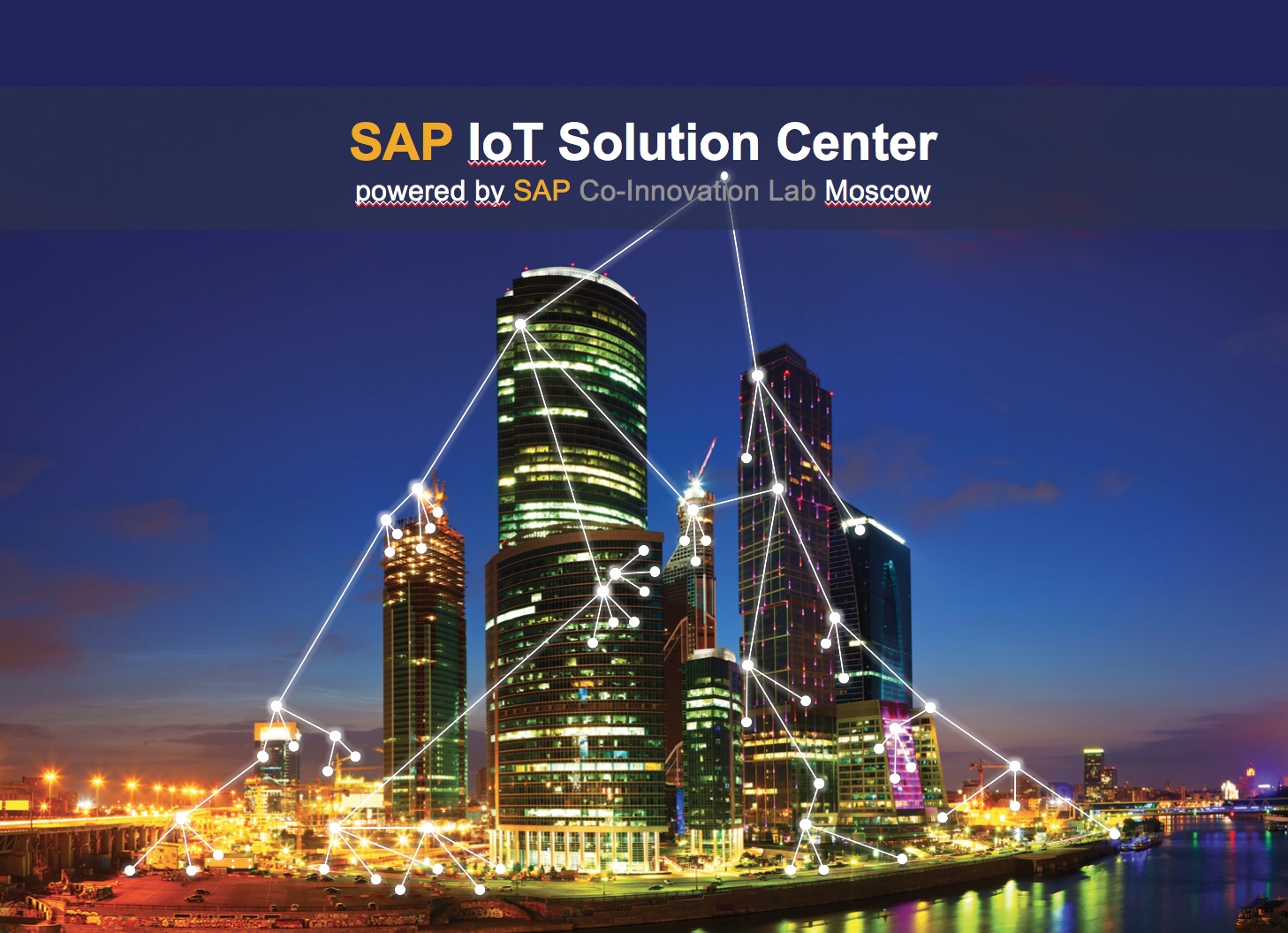 This summer some exciting things have happened to us. It’s a good moment now to shed lights on what it was on the scene and behind the scenes. In June we have conducted special event for developers and companies – SAP Innovation Forum Moscow. We had a couple of similar events in the past to drive SAP technologies adoption across the ecosystem but, on the other hand, this one was a special one for us and it deserves a more detailed story. We depicted not only our technologies at this event but also demonstrated the way of thinking while dealing with such complex areas as Internet of Things is.

To get to know more about the event itself, you can refer to Slava’s blog Innovation Forum: SAP for ISV’s in Moscow as well. The event was a result of joint efforts of SAP Co-Innovation Lab (SAP COIL), SAP Labs Moscow and SAP Integration and Certification Center (SAP ICC). We were lucky to have SAP leaders as speakers and participants on board in addition to our local management and experts. It allowed us to show the strategy and adoption of SAP technologies at one go as an unbeatable combination. Bernd Leukert as a keynote speaker explained it clearly – our “modular” approach to IoT solutions and the ecosystem itself – “Platforms, Applications, Partners” where SAP HANA Cloud Platform is a basis and where SAP HANA with its “sister” SAP HANA Vora involved as an advanced platform to create the apps for the “tomorrowland”. In addition we complimented this direction with our current projects.

During the event, we inaugurated the new SAP IoT Solution Center powered by SAP Co-Innovation Lab Moscow. Moreover, the opening ceremony became itself a separate event 🙂 The opening looked as a traditional ceremony of opening new spaces – the red ribbon cutting ceremony. However, as we are living in the world of evolving technologies, the ceremony relied on Internet, on “wired” and “unwired” Things. It was a completely surprising thing for the audience and even for all of our SAP colleagues, and even for us. So the moment has come, crossing the fingers and… Bernd cut the ribbon on the stage and the ribbon in our office “automagically” was cut at the same moment (well, you know, almost at the same and I will tell you why “almost” later). There was online video streaming conducted from our office to the venue’s stage.

We immediately attracted all the necessary attention we need to start the IoT Solution Center. See what SAP leaders said:

You can see some pictures of before-and-after moments: 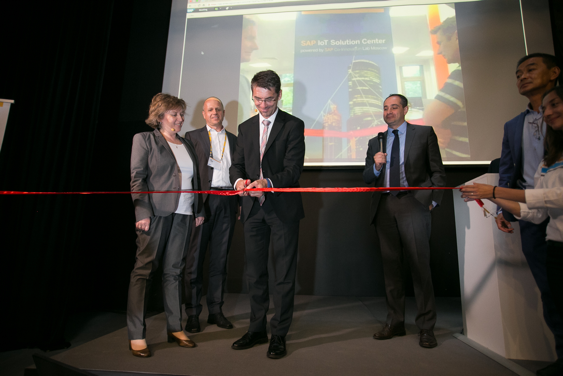 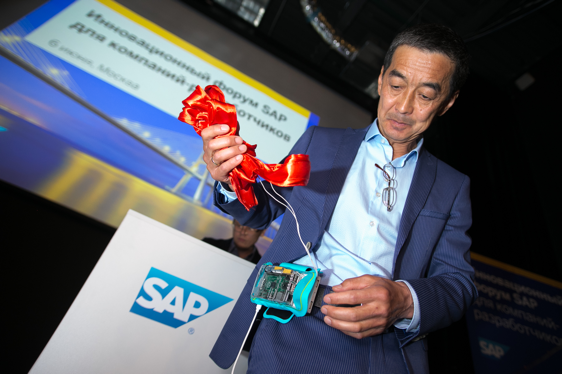 Needless to say more, you can watch it in action as well and this is what we call Internet-of-Ribbon-Cutting solution.

Original idea was the one to implement some of the automation tasks at the venue. But there are so many options 🙂 Then it became a particular ribbon-cutting solution. Here is what we had: two Raspberry Pi modules and two red ribbons. The ribbon on the stage was equipped with a wired circuit. The other one, located at the SAP IoT Solution Center entrance, was specially prepared with the electromagnet attached. Both ribbons were connected to the RasPis. These were corresponding source and target for the signal processing at the edge. In addition to it, we had SAP HANA Cloud Platform IoT services as a mediator for message brokering. Well, you know, it looked so simple but until the moment we started digging into the world of hardware. That is how we also stepped into the world of “twins” and “avatars”. And that is why we developed the solution in the way we did it. Even simple, at first sight, things, become complex and require attention to every detail when we enter the area of the Internet of Things – security, stability, reliability, interoperability, manageability and some other ‘-ability’. Moreover, there are alternative ways to think about it – either implement it in the hardware or in the software, or, maybe, in the hybrid approach. Each of the alternatives has its own pros and cons but this is the subject for another discussion.

To make the story short, our approach followed the software implementation. The picture below depicts all the parts involved in our Internet-of-Ribbon-Cutting solution. 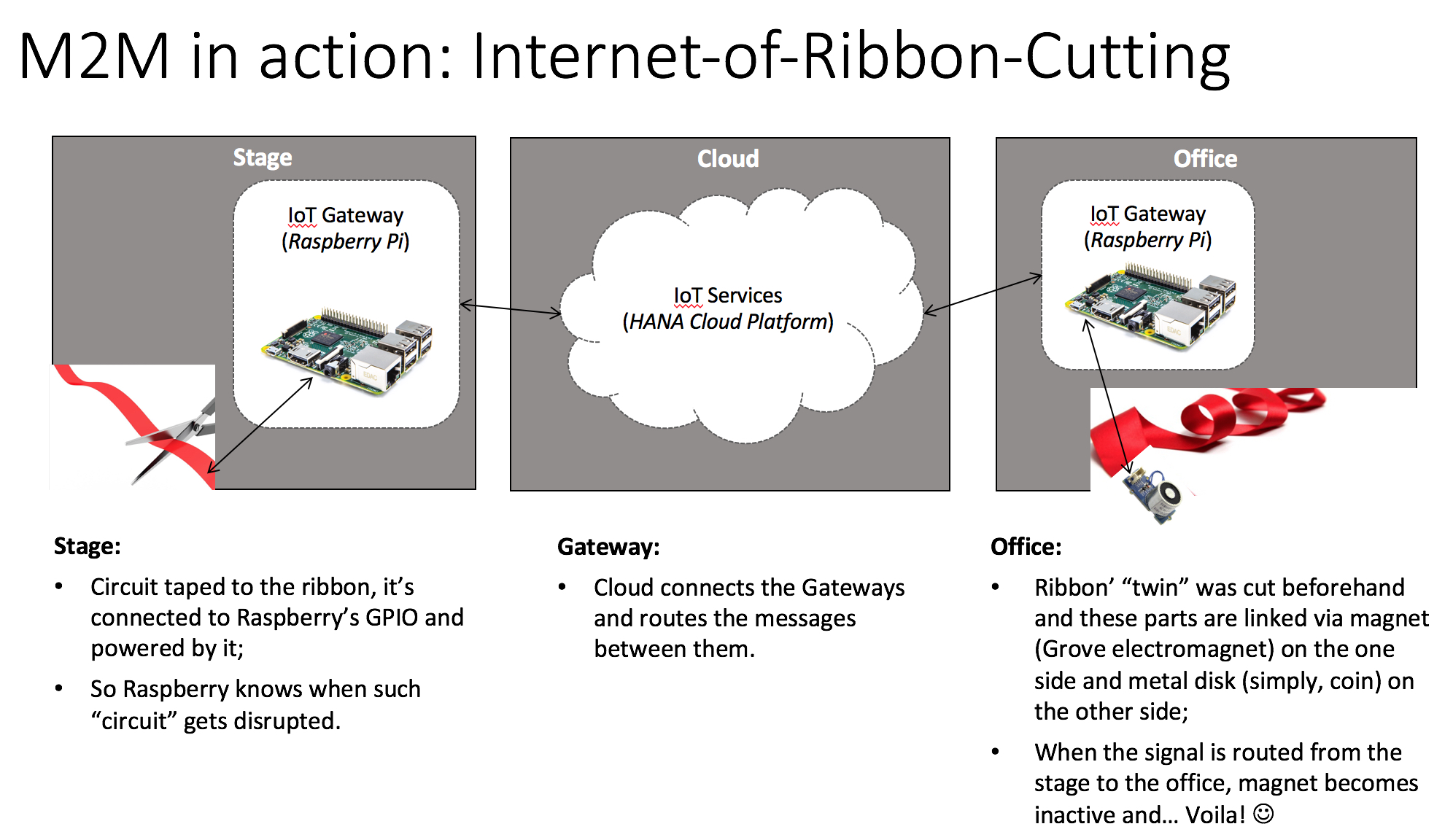 And a little bit more detailed sequence (see the picture below):

0) There is a roundtrip which runs to collect all the necessary data periodically from the ribbon (aka Thing) locations, e.g. its availability;

1) When the ribbon was cut on the stage the application on RasPi detects the circuit disruption and initiates the request to HCP;

2) The application on top of HCP accepts the request and immediately asks the RasPi (the requestor) whether the request is not a fake, e.g. power surge as a result of static electricity presence – this is kind of the logic to be executed in HCP application;

3) RasPi on the stage (the requestor) confirms to HCP that there were no other reasons to send the request, it means that the result of rule execution at HCP is the same as at RasPi;

4) HCP requests the action from remote location connected (the target). And, according to the 0-step running in the background, HCP always knows whether RasPi at the edge is online or offline, and all the necessary details if it’s needed;

5) RasPi from the remote location (the target) sends the response once the requested action has been completed;

6) The process successfully finishes (if your fingers crossed enough 🙂 ) And HCP knows about it, so we can monitor this end-to-end communication. But now you got an understanding why it was not a realtime process. 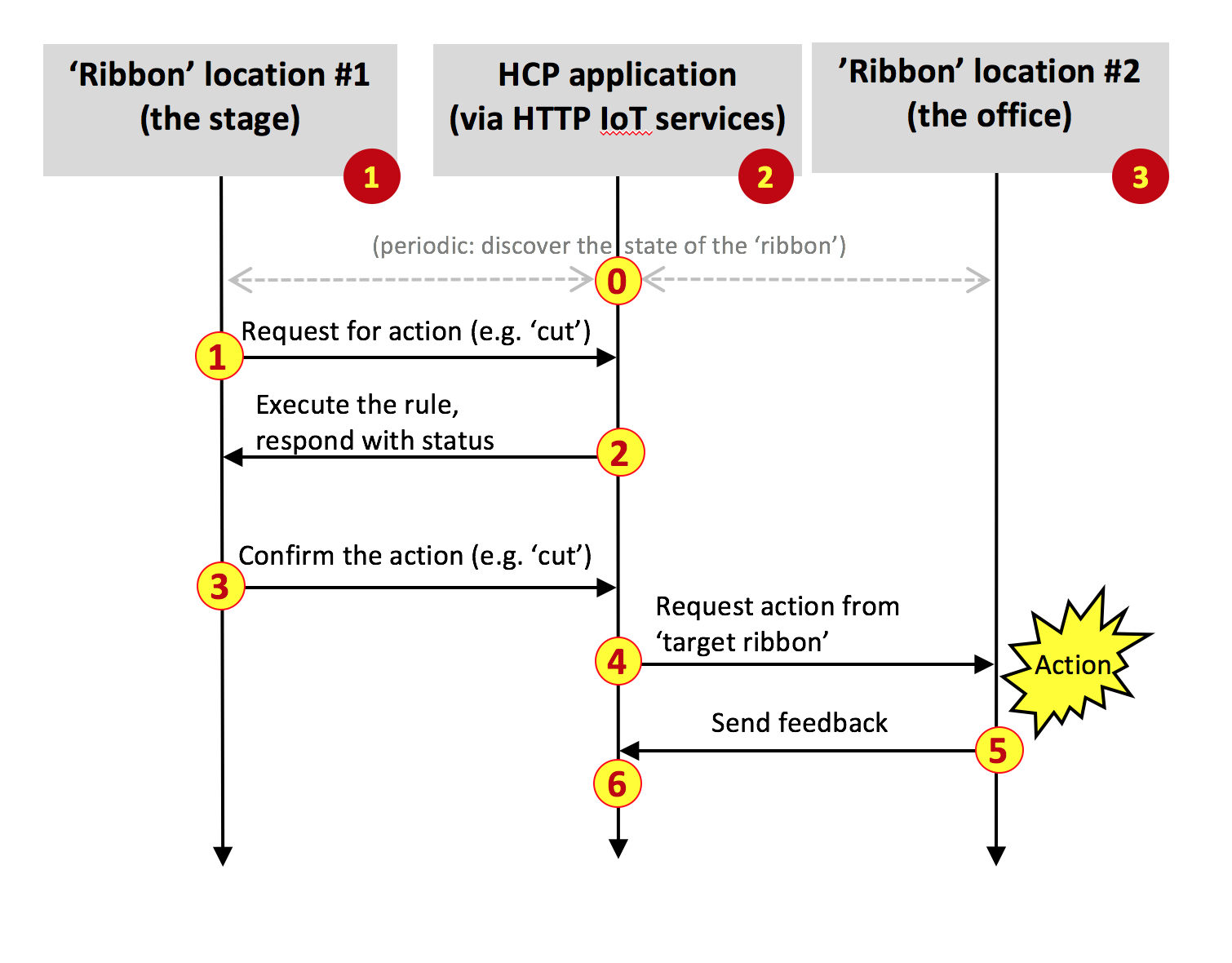 That was the magic! For sure, now there are even more features HCP IoT services offer, e.g. MQTT which allows you to use some additional QoS features and easier way of pub/sub interaction for the Things and HCP. There is enough space for us to elaborate on this small automation solution and scale it out from the ribbons to the other Things.

We believe that opening of such IoT Solution Center here, in Russia, is the right step forward. As you may have recently heard, the latest BCG e-Intensity (“digitalization” index), published this year, depicted a 20 year long gap between Russia and the top countries from the index. Nevertheless, let the philosophers to decide whether it is good or bad, because there is the other side of the same coin. The reports from the past years had a prediction of produced data redistribution for the next years as follows:

It’s happening now! Some industries here, locally, are already far beyond in making sense of technology adoption and data processing. We have a hope that our SAP IoT Solution Center will be a helping hand, reducing the gaps further for Russia and CIS countries. And it’s going to bring not only technologies but also innovative ideas to the ecosystem. We can offer such a support with the help of our experts at SAP Co-Innovation Lab jointly with the experts from the other technical and industry teams at SAP Labs and SAP CIS. Our target is successful end-to-end IoT solutions, which require collaboration of SAP with the wide range of technology companies and developers. These are the companies with deep knowledge and experience in building “niche” solutions for specific industries as well as companies with expertise in hardware (aka Things) – collecting and processing information from the sensors and controllers. Co-Innovation means for us the combination of the unique business process knowledge and state-of-the-arts data analytics with deep knowledge of the implementation on the edge including every single aspect – sensors, controllers, MPUs and communication technologies. Our COIL partners, either like ASUproject with its Intelligent Oilfiled, or VeeRoute with its last-mile delivery optimization for the cities, are showing that we are on the right track with the approach chosen.

We also have a dedicated communication channel for the questions related to IoT at our lab – iotcoilmoscow@sap.com. Please do not hesitate to drop us a message if you are interested in getting more details about our activities, either proposing a cool idea! Even if it is not about Russia. SAP Co-Innovation Lab teams are global teams!