Once upon a time, I implored Björn Goerke to devote his SAP TechEd LV 2016 keynote to Independence Day: Resurgence. Good news—he ignored me and did something 1.21 gigawatts better. (Gigawatts is not a measure of awesomeness? Fine. Well, it should be.) In homage to Back to the Future, here are the three things I’m going to remember most about TechEd LV 2016.

Back to the Best Keynoter

Please, allow me to be the one-millionth person to comment on how nerdy and awesome Bjoern Goerke is. His Monday night keynote was my favorite part of the conference. First of all, THERE WAS AN ACTUAL DELOREAN, and second, he was wearing a Doc Brown suit and goggles. Not to mention, he live-demo’d on stage (though he did mutter to himself about it a little). Amazing work by Denise Nepraunig and the rest of the team.

Back to the Basis

True story: At past TechEds, our Basis books have been kind of lonely. Y’all want HANA, y’all want Fiori, y’all want UI5…poor Basis just sits alone in its little corner thinking to itself about how what everyone could REALLY use is some classic performance optimization. Well, at TechEd 2016—for reasons I don’t actually know, though maybe someone else can shed some light on it—Basis books were selling like wildfire. What do you have to say to that, HANA?

I know it makes me really boring to say this (and it’s probably not the first time I have), but here’s the truth: TechEd all comes down to one thing, and that’s the people. From that perspective…there’s nothing better than this conference. Ever. Photographic evidence is displayed below, starring Carsten Boennen, Denise Nepraunig, Karin Tillotson, Matthias Steiner,  Tobias Hofmann, and Richard Bremer. (Egregiously, Susan Keohan, Jocelyn Dart, Thorsten Franz, Christian Braukmüller, and Matt Fraser are, somehow, not pictured here. Unclear how that happened, but it will have to be rectified next year.)

And no, dear reader: Jeff Goldblum was not in attendance. 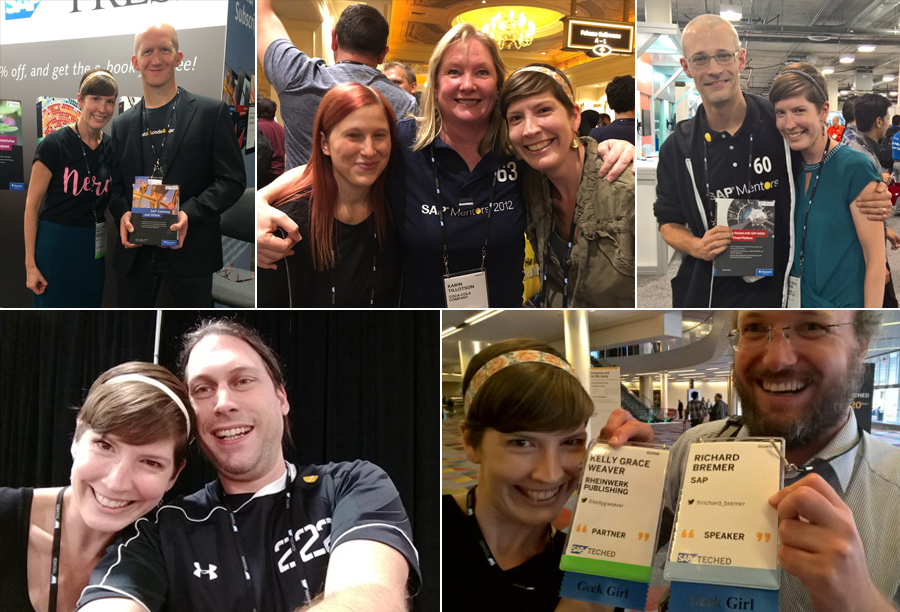 355 days until next year? Ugh. Maybe Björn will let me borrow the DeLorean.

You can follow me on Twitter at @kellygweaver, where I have been known to wax philosophical on haikus, caffeine, commercials I hate, and the nature of the human condition. Wait, I mean cats.

Back to the Basis! So glad to hear that. And yes, meeting people "for real" that I have previously only known "virtually" was one of the true highlights, and yes, I include you in that sentiment, Kelly. Didn't we get a picture taken of us together? Hmm.

Somebody better send me that photo. (Email's on my profile.)

Like you, I was a fan of Bjoern Goerke's keynote - and not so much a fan of the basement.  And I did hear Basis people mumbling (as they do) about the lack of 'basis-related' sessions.   We know these people keep the lights on for us, so we (at least *I*) tend to treat them well.  Maybe I should buy them early Christmas presents... in the form of books?

Don't know how you didn't get a picture with me, because we spent SOOO MUCH TIME together

Good thing we live in the same city, AM I RIGHT? #meetingoftheunicornsocks

What do you have to say to that, HANA?

Hey, maybe SAP Press should invest in some kind of predictive analytics solution, eh? Although I'm afraid those might mislead you into not printing any more ABAP books, so nevermind.

It was so great finally meeting you in person!

RIGHT BACK ATCHA! I look forward to the next time.

Was nice meeting you again... and even more so since you worked on your hugging skills since May! Hence all good... no wait, I didn't get a free shirt! 😯