SCN is coming to an end as we all know and apparently I managed to get through early.

Now, that leaves a feeling of achievement, even early in the week 😀 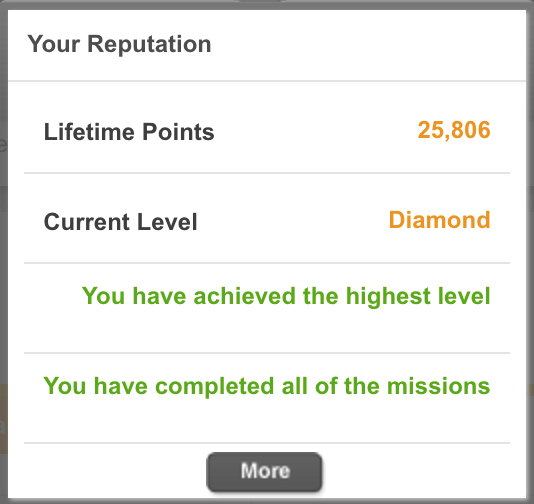 Having this big achievement under my belt, I am a bit disappointed.

No final fight, no end boss, no grand finale! 🙁

Guys, if that’s “gamification” for you, then please, here’s some examples on how the cool stuff looked like:

Or, for the less arcade-inclined players:

Anyhow, maybe the SCN team can still come up with an epic end rememberable end of service webpage.

But I assume, it will just be a redirect to the new community or to here.

I was waiting for your Doom reference! But C64, that's going way back. 😉

Congrats on having nowhere else to go... until next week, anyway.

You final mission if you choose to accept it...is to take down anyone who posts questions on their status 😉

Congrats Lars..may all the good deeds you have done in this SCN life give you good 'karma' in your next 1DX journey 😛 😆

Ha! Doing a mission after the end of all missions and without even getting points?

Let's see what the Karma thing does to me. Maybe I get reincarnated in some weird way. Guess we'll find out in about 6 days...

I'd like to propose that Lars never really existed and is a ghost in the machine.  I mean think about it people... how could a human know so much stuff?  I think Bank of America will back me up here.  Lars must be a simulation.  That said if somebody knows how to load Lars into my Amazon Echo I think it would be really cool to have him as a pet on my counter.  "Lars how many teaspoons in a tablespoon?".   "There are 3 teaspoons in a tablespoon sir!".  I know what you are all thinking;  this is a crazy concept.  Lars could never be that polite right?  Am I right?  🙂

great blog post 🙂
I feel the same, after reaching the highest SCN level before this advenure got closed without great final.

But now we are grabbing Karma points and I'm sure this could be useful for our next couple of lifes. 😉

Hmm... yeah, the Karma points... I guess we will find out about their usefulness once this life is over? Is this a good thing?
On the bright side, the current  SCN 3.0-adoption-missions force the focus to something else then point collection.

I’m a bit disappointed myself…. I put time into SCN for 8+ years to build a good “reputation” and its been wipe-out clean. What can I tell you… unless the format gets to engage people the way it used to Its going to be a slow start for the new SAP Community

Ha!
I hear you, Juan! Although my remark about "if this is a good thing" was more about the after-life experience 🙂

To be honest, after they stopped sending T-Shirts and windbreakers, the main motivation for me to get "points" was gone. We have an internal JAM community at SAP where they kept sending similar things from the merchandise shop. And guess what: as soon as I received everything (ok, I didn't go for the SAP HANA Admin book from SAP Press :-)) I figured it was time to reduce efforts there, too...

Ok, jokes aside, the loss of the point system is something I welcome. Everybody who ranked up a lot of points in the old world still can showcase this achievement via the "Legacy Reputation" display in the profile. So, nothing gets lost here.

Let's try not to get too pushed off the new SCN because of it's deficiencies. Give it some more time and I'm optimistic, that it will become the better platform that we all want.

Found this (again - I had seen it in ols SCN allreday) via tag "Retagging required" - I guess it could be changed to "Using SAP.com" ?

Probably (even though it's more about my personal experience and not so much about SAP.COM) , but I don't really see the benefit for now...
Cheers,
Lars