For weeks, on and off, I worked the print spool case.  For those who don’t know what that means, or who I am, you could look it up in your Yellow Pages.  Except those don’t exist in this realm (no NIS either).  Everything’s digital, including the phone books. They call them contacts these days; they aren’t even books to speak of.  When I was a rookie, a contact was what you connected the juice to when you wanted to jump start your motor.

I received a case from a client I prefer not to name, telling me to check out this new spool.  My queue knowledge goes back to the dark ages of printing, when daisy wheels and dot matrix ruled the earth, in their turn sending the dinosaur chain printers into oblivion, before being replaced by lasers and LEDs and, well, pictures on a flat screen. I’ve even operated a thermofax, which these youngsters could not fathom without their pocket search engines.

You’d think this business would be cold, what with the dead trees, and the overpriced monopolistic get ink rich quick schemes, and the security mavens, and the incompatibilities from one stream to the next, but there still needs to be shipping labels for the postman to ring twice for, and labels for your snazzy conference badges so vendors can send you junk email for the rest of your bourne days, or you change your address, or you filter them into oblivion.  Where was I? Oh yes, still, the ink must flow.

The information I could glean about how to build print spools was scattered, so I flung my search nets far and wide. I first tried loading my device definitions.  Hm. No authority.  Instead of the green light, I get the little grey cell menu.  Greyed, as in not working, not as in experienced. 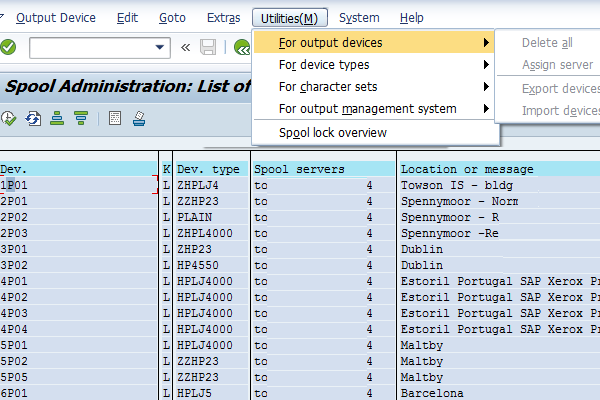 So I had to make contact with the under-management, the folks that have sets of keys to all kinds of legacy types. The above listing would have sent me to Euroland, but instead of a nice steamship ride across the Atlantic, I had to settle for my own cell block, I mean cube. No teched in Barcelona alas.

View from another angle showed me a little more about the case.  I needed to know much more about external devices, meaning another bolt-on to the SAP systems I police.  There’s a certification page, a book-making scheme where the parties get together and make truce so all parties can play in the same arena.  I’ve got the link somewhere if another operative needs to know.  Most of what I found there was not user friendly, merely the cookbook in how to get into the racket.  They’re not about to open their books and make it easy for the turf to be trod on.  So that’s one external. 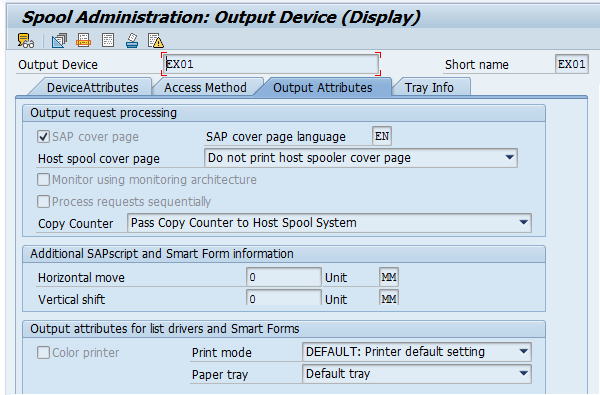 Besides the output definitions, there’s an also-ran menu that’s needed to get these systems to talk nice to each other.  The tab below shows the SAP configuration, but not the OMS.  You’d probably only want to deal with one OMS anyway, but if your company merged with another that had a different output management system, I could see quite the battle to decide which one to keep.  I’d only want one, if I had the choice. 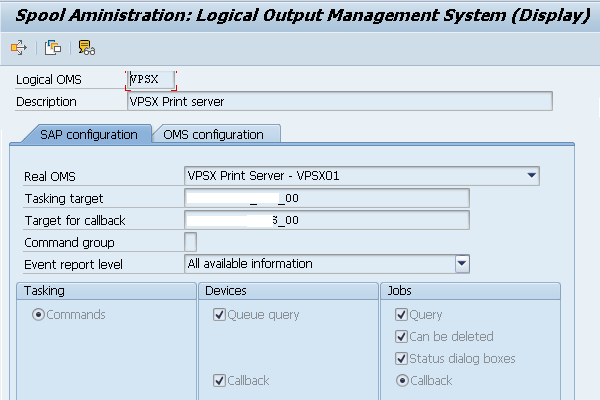 The callback above is a helpful scheme, like having an answering service that screens your messages and then lets you know when something needs your attention.  One problem I hit regularly is the misfit paper, like a slug that won’t drop into the automat slot.  It’s usually A4 instead of 8½x11 paper.

Further on, I switched off the flat screen capture, strapped on my autoloader, and headed out into the field.  I’ve seen paper, and I’ve seen pain, this time I can see the dots in the matrix pretty clearly, in color, at least in select broadcast areas.  For my case notes, I cornered this printer in the last known place of residence, and did the mobile mug shot routine.  I didn’t even need to hold up the board [ see, which, fr’instance: [ Benjamin Siegel – Mafia Mug Shots of Bugsy Siegel ] 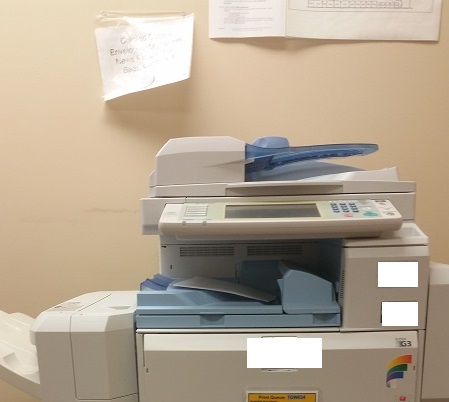 At the bottom of the image is a paper card (another printed label)  representing key facts such as sprocket holes and character columns (80, 132, 160, like that). That’s a clue I don’t always get.

Hard times coding can mean hard times debugging, so the goal is to match the devices to the queues, and the spools to be self-nominated.  It’s all about easy and simple, catch me?  The unmasked code below says “082”, like reporting a partial plate to the pursuit vehicle.  In my day, that would get called out to the prowl cars on an APB (all points bulletins to you rookies) but today that’s likely to end up being splashed over the freeway in a giant digital display of silver alerts, amber alerts, you pick the cheesy colors. 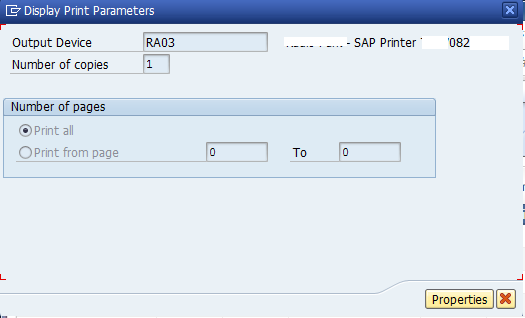 The RA in the device, which matches to only one printer (though a printer could match more than one device, oddly), refers to an electronics company no longer in service [See: Bendix Radio Foundation ].

Sometimes when I case a joint, I set up deadfalls, traps for unwary travelers to figure out if my packets are being spoofed.  For this episode I needed to determine the signs when a missing person report should be sent.  I set up two tricks, one where a device was in the directory, and one where the directory records are long gone.  However, I didn’t have the warrant necessary to make this happen, so I had to consult the authorities, the ones that activate the directory if you catch my drift.  As it turns out, those quarter-inch-phone-jack pushers like Lily Tomlin’s Ernestine no longer ring through the local exchange; it’s all global conglomerates syndicating the traffic.  I ended up chatting with one operative who didn’t grow up in Brooklyn (neither the New York one nor the Maryland one) and our talk was a packet-dropping discordance.  I explained I wanted to send print jobs to a disconnected number.  He said “you want me to create the death printer?”  Well if you put it that way, yes, forward my messages to the death printer.  Doesn’t matter if the DNS resolves or not. NXDOMAIN.

Back to the job at hand.  Discovering which LP goes with which dust cover.  Or, more aptly, which cylinders are loaded?  I had to get my credentials checked by the basic Creds, then I could see the jobs.  I picked up one thread that came from an OS clue, and proceeded to the log. 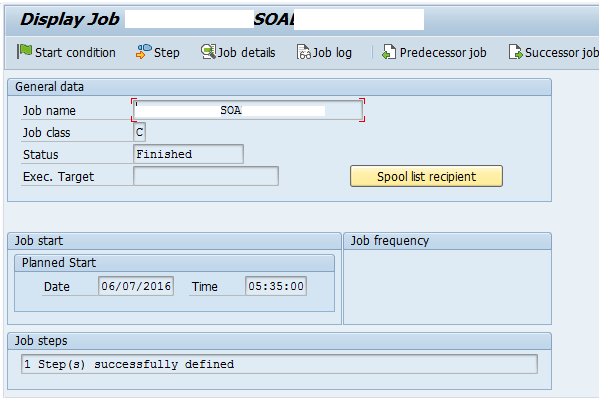 The names have been changed to protect the innocent, meaning the purpose of the code has been obscured to keep the source confidential.  It’s a history purge with an associated spool step. I connected this job to the defined queue more or less by brute force, digging up the run time from one place and the spool device from another.  It’s not a pretty picture; to get the entire process done within a reasonable time will take some automation. Details when I have them.  If I get them.

This is not the only racket in town. In another part of town, printers talk to other software vendors. A wire tap might be needed to scan the lines listening for cross talk, the ghosts of interrupts past that can trigger the paper storm should one driver run into another.  So I went back to my office and donned PC gear, ready to look in windows and figure out whether this is a paste job or just a copy.  Turns out dos types can speak both printer control language from that big racket that got split into two parts, and that other scripting posted by another big racket that deals in portable documents.  Not letters of transit mind you, but the format that can cost you.

The first port I cased was a number (101) that had been around since the turn of the century, or the hundreds as we called them.  It was a complex model, having the kind of multiple interface options that can cause a spooler to bifurcate or worse.  Fortunately, some poor lug before me had marked the bills with characteristics that would honor a wanted poster description, right down to the dots per inch.

It’s double-sided printing capable, a feature I’ve learned to appreciate despite the potential to get the paper feed in a jam. 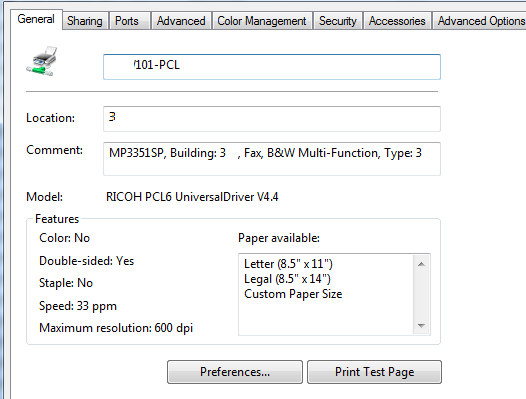 The second location I gandered turned out to be pretty close to the first, making me think maybe the queue market was over-saturated, and might start some kind of punch card war.

I could not tell what would differentiate the two devices as both were black and white, double-sided, the main choices for most. I began to discern subtle differences, such as delivery speed, and feedstock.  It hit me, the old A4 import was there, and a bonus of 11×17 inches, or tabloid as we call it in impolite society.  I’d go with the 111 over the 101 almost any day.  But could I get the SAP system to use the entire print surface?  That remains a mystery. 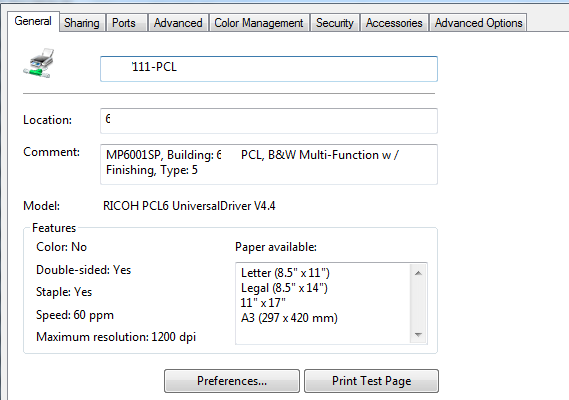 Sometimes you get results by breaking the eggshell.  Other times, it’s not as easy as dropping the yolk.  For this job,  red lights went off easier than I expected.  I don’t need to bore into all the details; a few are highlighted below in red.  Pulling network cables, removing papers, that kind of thing that detectives do shot off all the right signals. 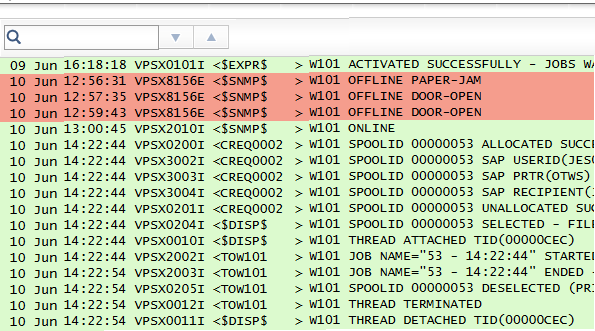 Back in the office, I got new instructions: talk to the folk on the other side of the world.  That’s easy to say, not as easy to do.  First, I had to synchronize my watch (see, e.g., Hey, ABAP Detective, you got 10 seconds?).  My Mandarin is as good as my Cantonese, which is to say, none.  Fortunately my overseas colleagues more than make up for my deficit with their skills.  First I needed to pick some queues for them to check on.  That turned out to be easy enough despite a jumble of device types and categories.  I was looking for type “L” and found over 1000 total queues, including a bunch of “X” types that skirt the UNIX system jumping right through to the windows. 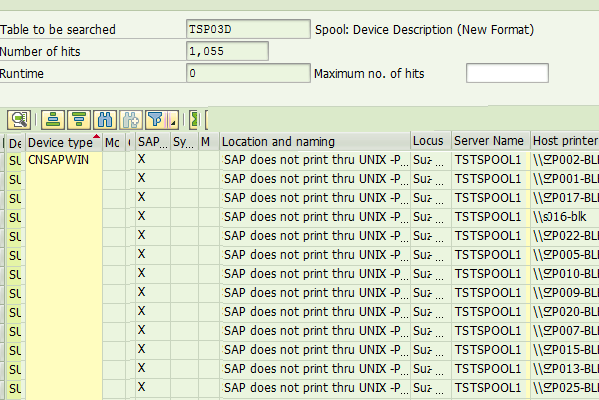 I’ll shrink the next couple steps, as they’re more for note completeness than for learning anything useful.

Unicode, spool admin, device types, more permutations than I thought could exist, and I suspect I don’t even know how far this goes.

Is this the last case for the ABAP Detective?  I guess it depends if I survive the impending move from jive to pressword.  On the way out the door, I’ll leave this cookie for the browsers.  Working with another operative on yet another continent, I was able to push Chinese characters across the morse code lines from here and back again.  My colleague supplied the Chinese, simplified or not I don’t know.  The brains at google tell me his test message says “I was a test page.” Which is not production. 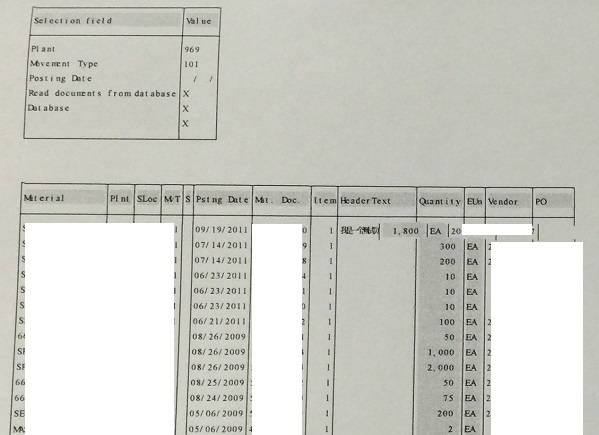 Did you notice the line shift?  If yes, maybe you could be an ABAP detective. Maybe. 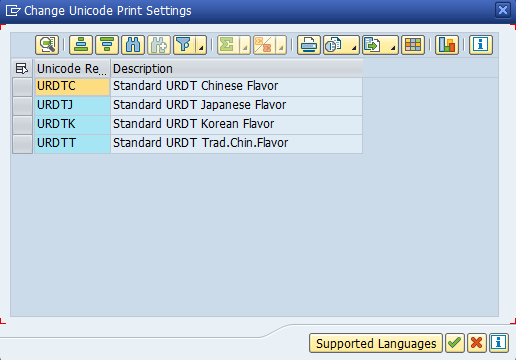 How you keep such a good sense of humor after all this is what amazes me the most! 😛

As my spouse often says, "if you're not having fun, you're not doing it right".

Also, the Scout Lodge I belong to has the motto "Cheerful Service." Not always easy, but you can whistle while you work.

Another great blog from my always good friend Mr. Spath 🙂 Thanks for keeping the ABAP Detective alive! 😀

Always a pleasure to keep up with the latest doings of the ABAP Detective!