What? No more lifetime points or leaderboards?.

It’s true. After a long, tumultuous history of points on SCN (or “ponits” and “pinots” as they were referred to in the days when “points” was a banned word), the community is moving to a new reputation system that will no longer include lifetime points, expertise points, levels, or leaderboards. (Caroleigh Deneen first wrote about this in her blog Reputation Reloaded.)

In anticipation of the October 10 launch of the new community, on October 7, at 2 .p.m CET, 8 a.m. Eastern and 5 a.m. Pacific time (12:00 noon UTC), we will implement a content and engagement freeze on SCN. It will no longer be possible to post blogs, ask or answer questions, like or rate anything.

And at that same time on that same day, we will stop awarding points. (Maybe we should call this “Julius von dem Bussche Day” 🙂 )

We now have enough time and experience under our belts to know that a point system that combines points for activities with points for positive feedback is not a reliable system for consistently or accurately gauging whether a member is a high-quality contributor.

We (and gamification experts in the industry in general) have also learned that levels, leaderboards, and topic leader contests, all based on points for activity, can cause a competitive environment where members try to cheat the system to gain recognition and standing.

So we are ready to retire this point-focused reputation system in our community and take things to the next level with a new way to emphasize quality.

Your reputation as it appears on the day the point system ends will be captured as a snapshot in your universal profile in the new community, like this: 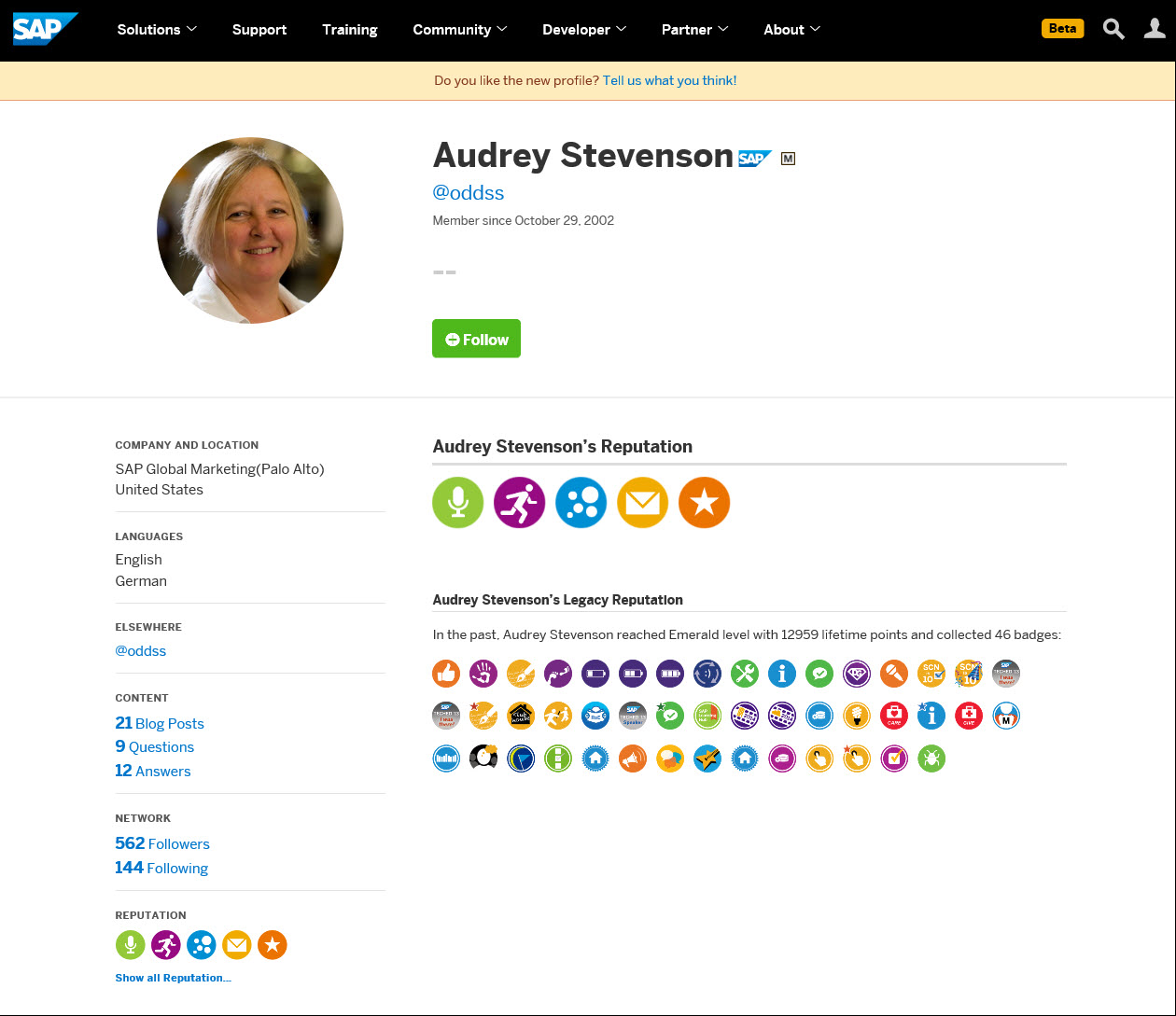 When we launch the new community on October 10, we will begin introducing elements of our new reputation system, and everybody will start new in that system. We will roll out elements over time as they are developed and implemented.

One of the first things we are rolling out is in our Q&A system. We are using the embedded karma credits system in Q&A.

While it is a form of point system, yes, we are de-emphasizing its importance as a reputation element by making your karma credit total visible only to you and moderators. No other members can see your karma total. Also, karma credits are restricted to the Q&A system; they cannot be earned in any other parts of the new community such as blogs or wiki.

In the very beginning, you will see your karma total as it accumulates, but you will not be able to see a breakdown of how it reached the current total. We will be rolling out the breakdown view for members as soon as we can, post-launch. Until that time, moderators will have access to the breakdown if there are any questions. Approximately a month after launch, we plan to roll out a new set of missions and badges. These missions will encourage positive behavior in the community (such as posting high-quality content), and earning a mission will earn you a badge. We have a new badge design that reflects difficulty level, something we will share more about when we roll out the missions.

So how will you celebrate Julius von dem Bussche Day? I thought about going online to purchase a pair of emerald earrings, a reflection of what will likely be my level when the point system ends. But maybe I’ll just pour myself a nice glass of pinot and watch Dorothy skip down the path towards the Emerald City instead…