SAP opened its doors for a series of regular excursions, one held on September 21 begin the first in the new school year.

20 pupils were invited to visit modern SAP LABS office in the center of Moscow, Russia. Excursion started in Design-Thinking Room, where shy children were facilitated to get into a more relaxed mood by drawing on a special wall. Our guests shared their feedback with us that such a wall is a dream of the whole school.

Our excursion started with a gripping SAP story presented by presales manager Denis Savkin. When our guests came to SAP, they did not know what SAP could be, but after Denis’s story they were sure that “SAP is everywhere”. There were many examples from daily life: “When you get up in the morning and go to the bath, you take a toothpaste (SAP customer), you take a shampoo (SAP customer). Then you have a breakfast and choose corn flakes (SAP customer), etc.” 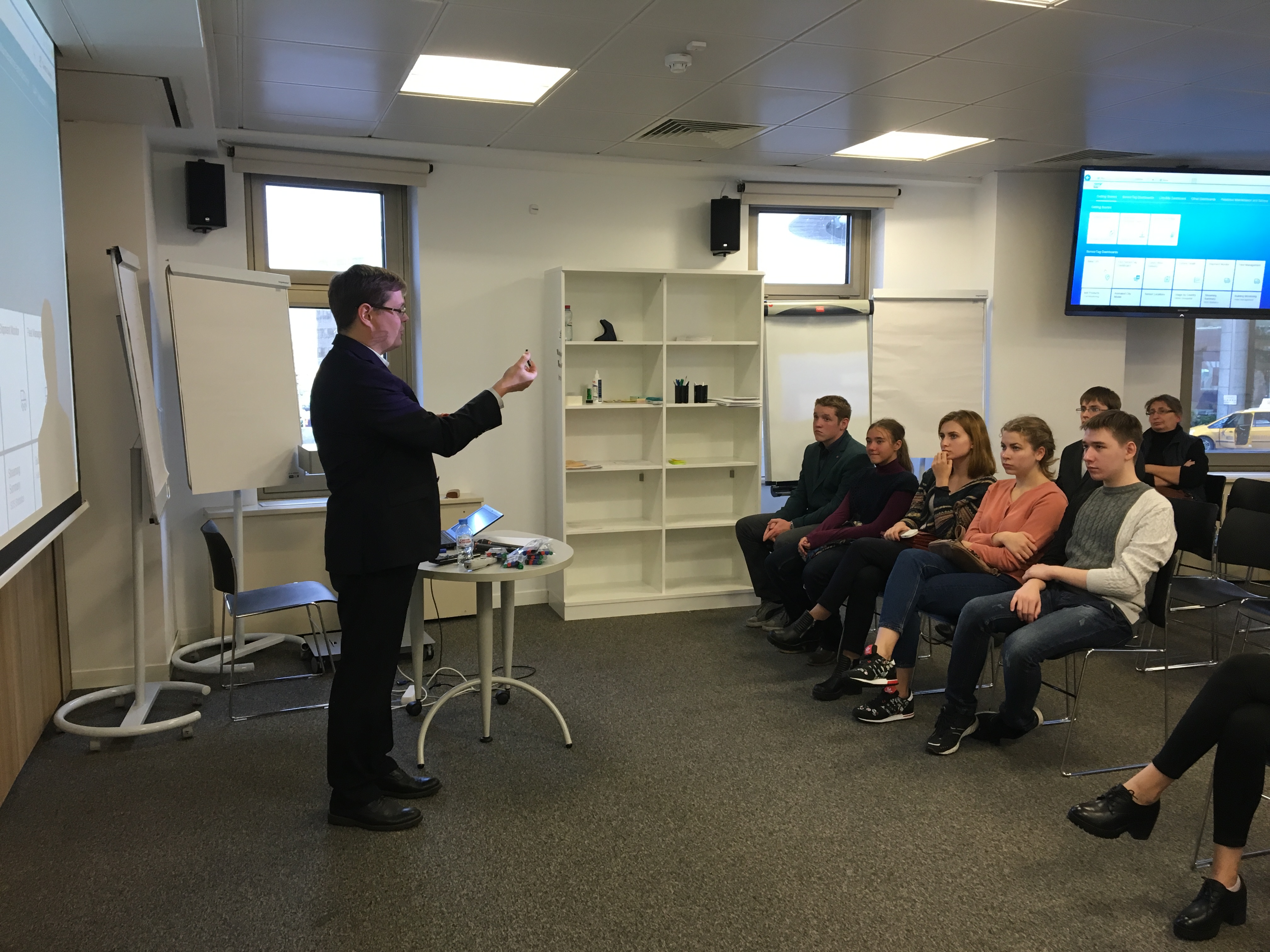 Denis told how our customers work using the example of Sims, Heroes and Lego (popular games). Such use cases allow easy understanding of why resource planning is important for a company.

Also Denis explained IoT (Internet-of-Things) concept in a funny way referencing to Terminator, and we looked into the nearest future with a huge amount of devices connected to the Internet. Big Data was described as the perspective theme of IT through the example of SAP HANA football project.

After SAP story we offered pizza to our guests (thanks to Happiness Stream and COO Natalia Ivanova). They posted photos with the food for the absent friends to see 🙂 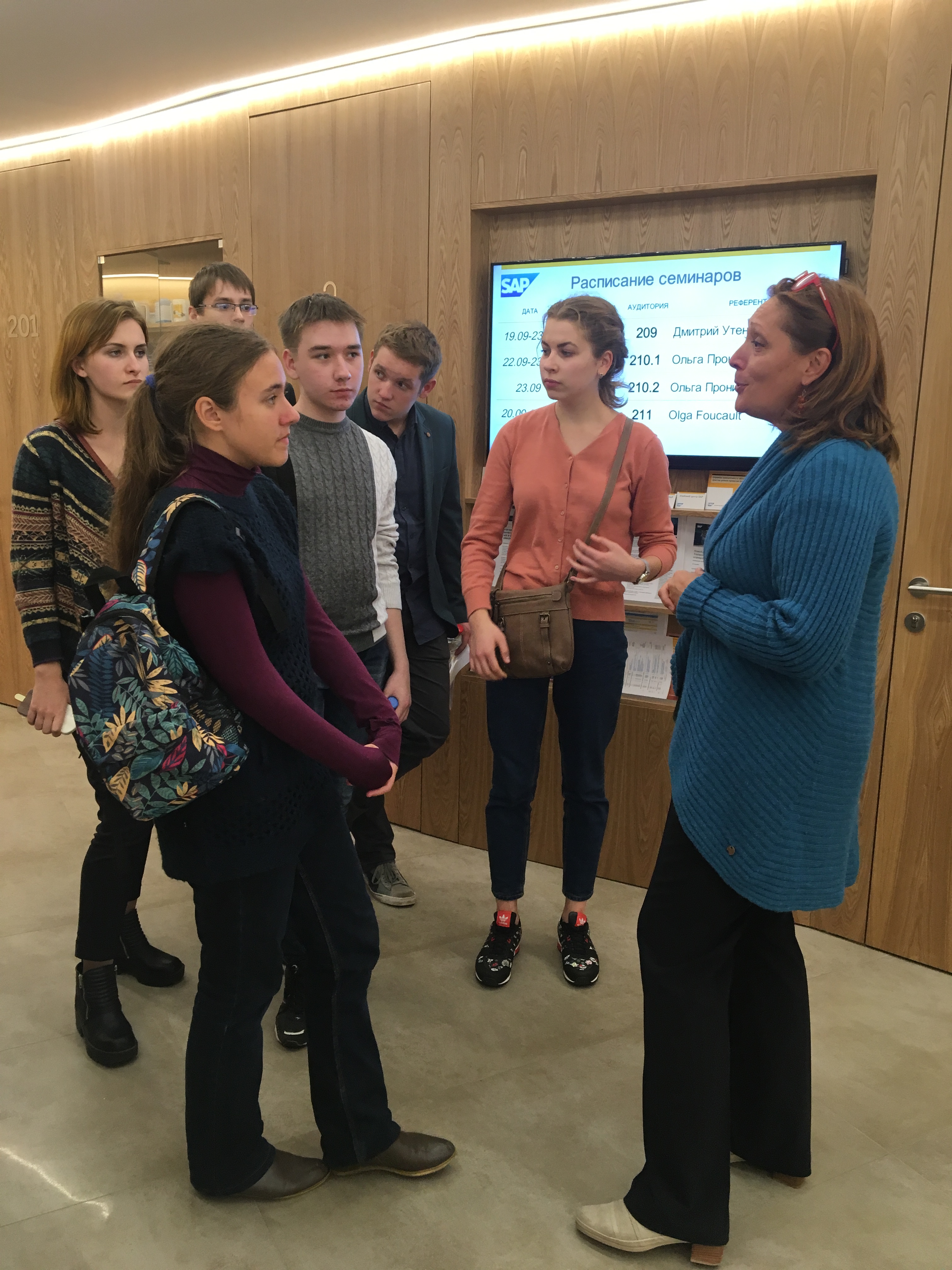 Then children had an excursion to the recently renovated Learning Center to practice soft skills. Ekaterina Andreeva (trainee in SAP Presales Academy) showed how to use Scribing technique to illustrate thoughts and ideas. Scribing is a dynamic, spectacular and truly enlightening method of documenting events as they happen. Pupils drew objects (coffee, a tree), abstracts (education, bad idea), actions (to run, to sing) and even stories (a school day) during very short timeframe. They learned not to be afraid to express ideas and improve their creativity (even teacher was happily involved). Children took a lot of funny sketches with them to show classmates. 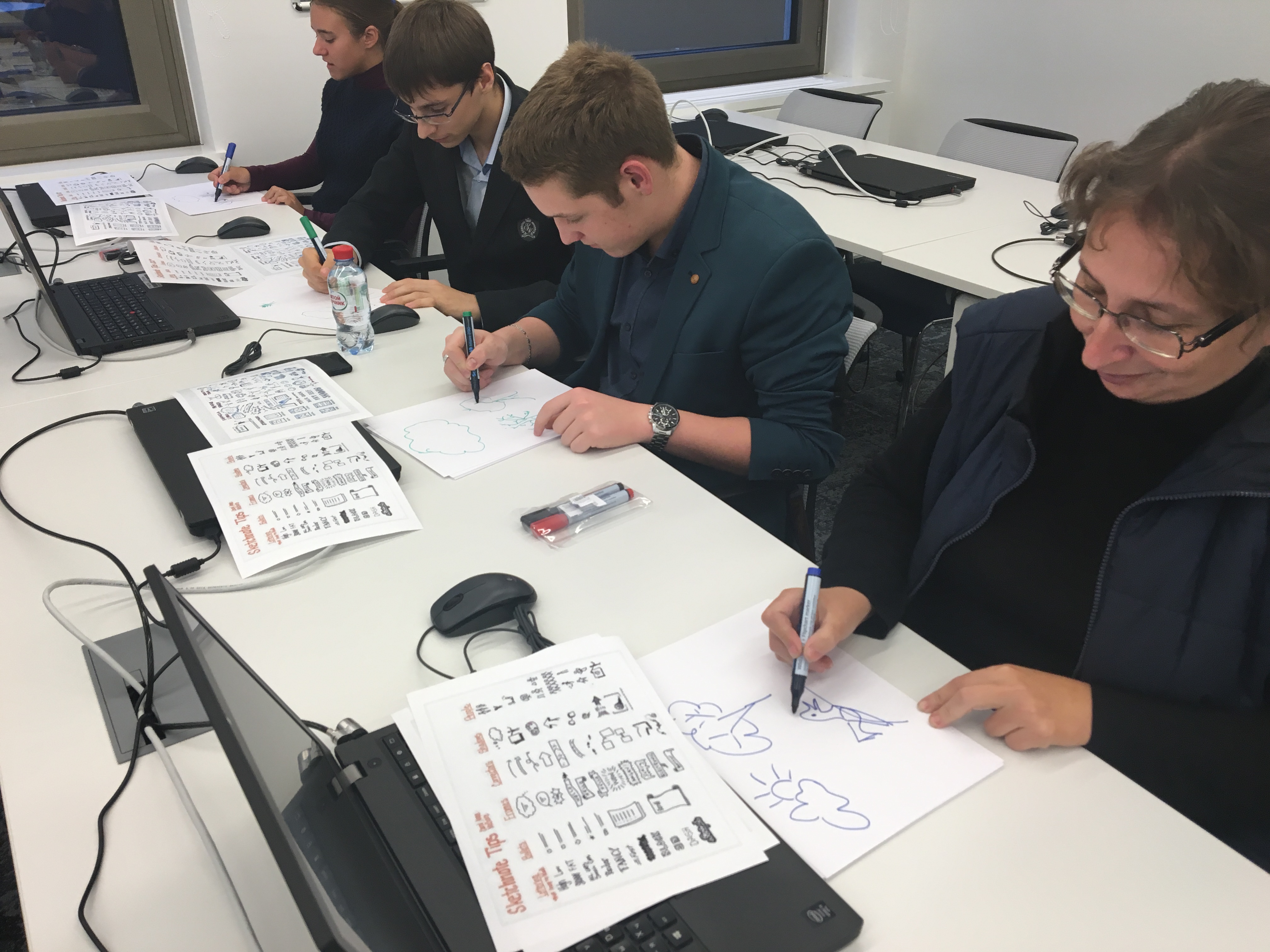 Developer Stanislav Bloshenko and support engineer Anna Konovalova led the last part of excursion. The event ended in a place that turned out to be the most exciting for kids – D-Shop. Each one had a chance to see 3D-printer, put on VR-glasses, play PSP and so on. They were shown the projects of two trainees-teams of students, who create program for Drones to count cows and program for KAMAZ to weight cargo. 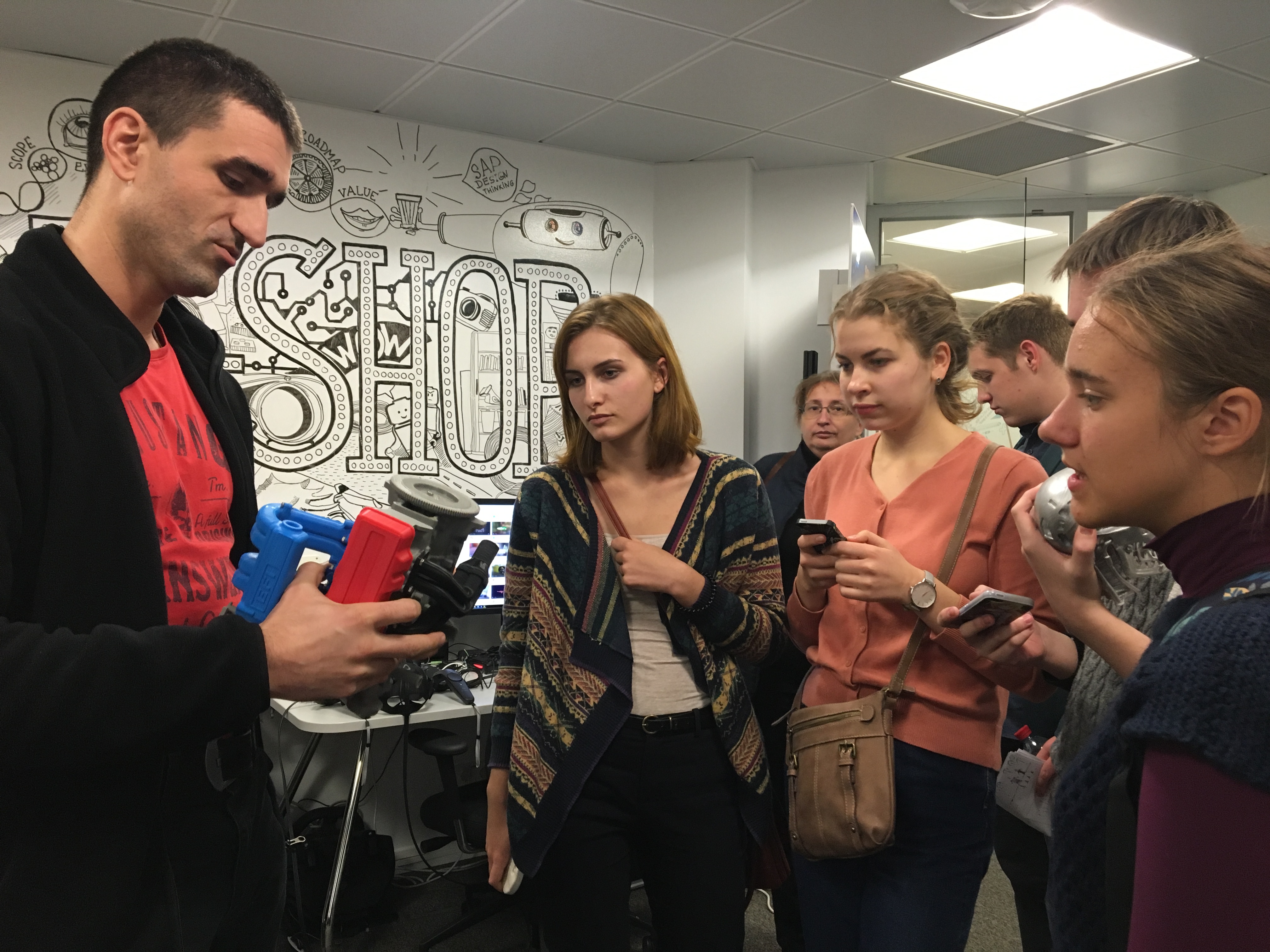 They personally tried to be an operator on Octagon and save airplanes in Heathrow and boots in Hamburg. Especially they enjoyed being a football trainer and check how German team really play. It was almost to send kinds home. 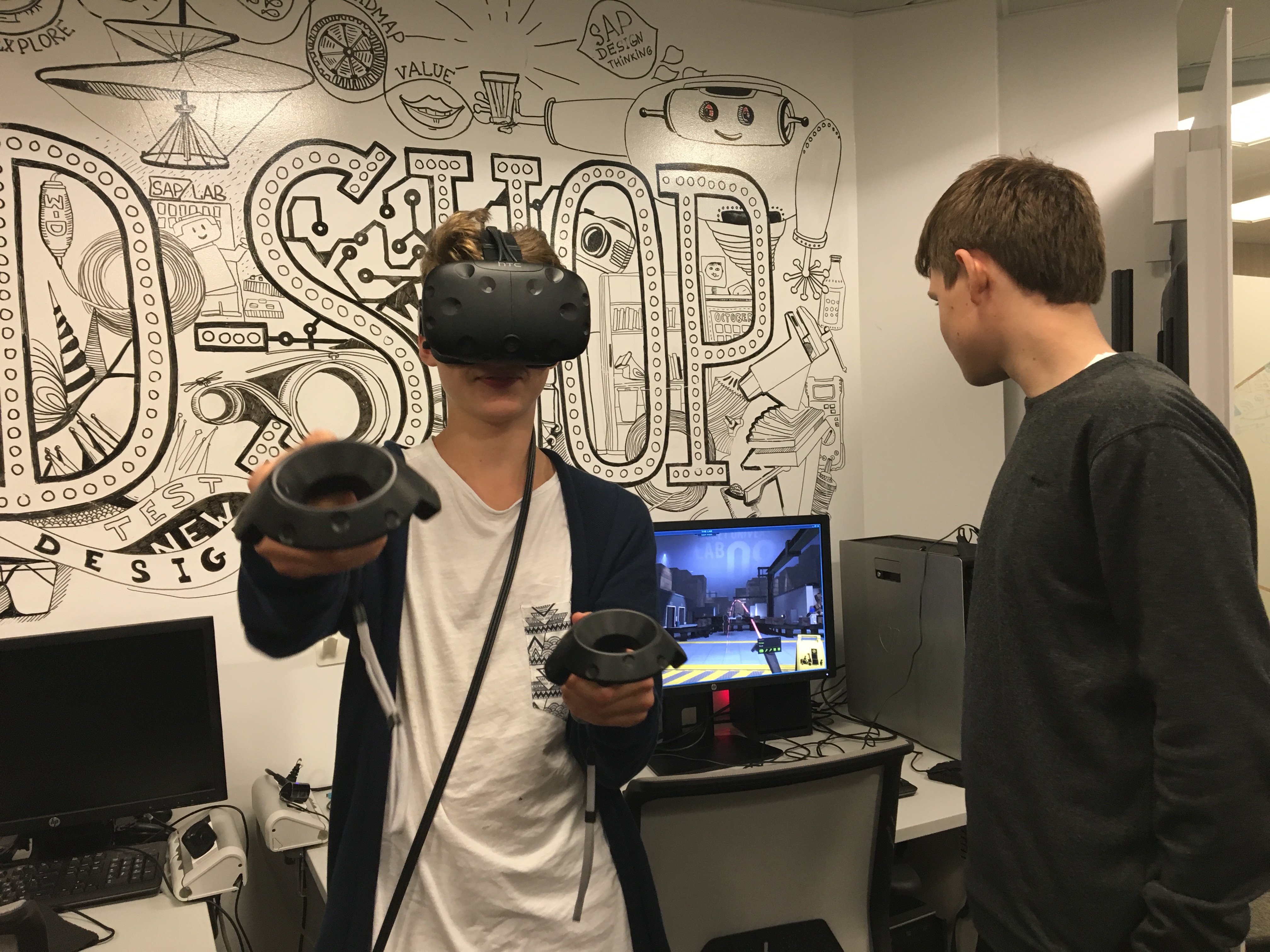 Each one received a high-tech souvenir – anti-stress ball “What’s SAP?” (thanks to marketing admin Anna Kopetskaya). Several pupils promised to come back to SAP for a dream job.