On the very first day at TechEd I overheard the following dialog in an elevator:

– Hey, you are going to TechEd too?

– Yeah. Looks like SAP came up with a lot of new stuff lately.

– Yep. It’s about time though.

– Hehe, try telling that to our developers!

Perhaps these guys should have hired better developers (or maybe just treated theirs better, who knows what’s the deal there) because as a clear indication that developers are interested in new stuff the session DEV215 “Enhancing Performance in SAP HANA Using the Latest Features in ABAP” was jam packed. All the seats were taken (a bit more on that later) and apparently standing along the walls has become a fire code violation since yesterday.

As soon as I see a company name (smartShift) next to the presenter’s name (Niko Faradouris) my heart sinks. Oh, here go hell come, another sales pitch for third party vendor software to help customers solve all their problems and improve productivity one hundred and ten percent. But, thank Cthulhu, no software was mentioned and the whole session was just pure, USDA grade A ABAP.

The session starts with the best ways to prepare your custom code for the move to HANA and, unsurprisingly, the top items are the same things that have already been best practice for at least 10 years. Imagine that. The concept of meshes is mentioned and at least part of the audience gets a bit confused. “So, is this like FAE?” – I’m glad someone else asked what was on my mind. 😳 There were many questions asked and we started to run out of time, so it’d be great to have a follow-up webcast on this for the ASUG members.

Doing quick check on SCN after the session, I discovered that meshes were briefly mentioned in this blog by Horst Keller back in 2014.There was a promise of more functionality to come, so maybe it’s time Horst wrote another blog, eh?

But back to those seats. It seems that the conference organizers believe that an average TechEd attendee is a slender debutante that “sits still looks pretty” in the economy-class size chair. But in reality an average attendee is a middle-aged dude with “dad bod” who is prone to manspreading (look it up). Add to that the fact that almost everyone carries some electronic device and wants to either take notes or type in emails during the sessions (which requires some elbow room) and you get 2 chair per person ratio.

Just like with the food distribution the day before, a dire need for some kind of technology solution to study the real life attendee butt-print (excuse my French), behavior and potential attendance numbers is apparent in the conference hosting industry.

The next session TEC305 “Custom Code Management at BASF on the Road to SAP S/4HANA” was featuring something called Custom Code Lifecycle Management (CCLM). Turns out it is part of SAP Solution Manager and does not require any additional license to run, just a little bit (or a lot?) of effort and time. This thing looked pretty neat and it can track whether some custom development objects are used or not. So if, like every other SAP customer out there, you have unused Z-code in your system, CCLM can help to find it so that it can be removed way before you switch to HANA.

After lunch I had to leave for the airport but before that I needed to pick up the stored bag at The Venetian hotel. Another very low-tech process and a clear opportunity for “digital transformation”. You hand the paper slip to the hotel employee then wait and wait while the bags are rolled out one at a time and some other people pick them up. Then finally your bag arrives and it’s handed to you in exchange for another piece of paper. Wouldn’t it be delightful if there was like an app where you could page the luggage service when you are on your way, so that the bag would already wait for you?

At least in the Las Vegas McCarran airport all is well in the technology department. Wi-Fi works without any need to keep a tab open for 45 minutes. And there is even some kind of IoT self-service in the restrooms: 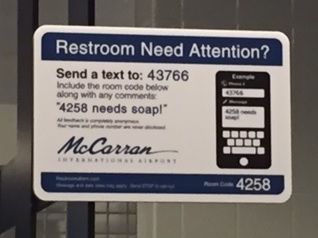 Southwest Airlines called my cell phone again to deliver a sad message that my flight has been delayed. It would’ve been helpful if I wasn’t already sitting at the gate and delay hasn’t already been announced twice. Oh dear.

The Southwest’s technology shortcomings, however, were completely redeemed by the absolutely delightful crew of the flight 2374 to RDU. The whole flight they not only delivered snacks and drinks with a smile but also provided endless entertainment. The crown jewel was an announcement at arrival. “We have a very special person with us today. He is 91 years old today and this was his first flight.” [Pause, the passengers clap and cheer.] “… As you exit, please wish happy birthday to our captain!” 🙂 Maybe that’s exactly what we all need today – not take ourselves too seriously?

In conclusion, my short wish list for the next year (hopefully, someone is reading this):

That’s it for the TechEd in Vegas, folks, I’m passing the baton to Barcelona and Bangalore. Rock on, guys!

ABAP was present at Teched. You could have visited e.g. Holger Janz, Development Manager of ABAP and responsible for the ABAP Virtual Machine and the ABAP Compiler or Thomas Fiedler, Product Expert, Product Owner of  ABAP at their booth and asked them ...

Because of your blog series I wished TechEd would run longer. Great read again! And even when I wasn't there in person, I sign your wish list. ^^

DEV215 was an ASUG session - great to hear it was packed!  It would have made a great candidate for a repeat session.

Thank you for your daily write-ups.

Tammy, I agree, it is well worth repeating. Great job by ASUG team on selecting the sessions. I should also note that, as I learned, the ASUG session presentations are available in the session catalog while SAP session materials (like TEC305) are not. Someone asked about it specifically in the sessions and was told no. Not sure what's up with that.

I heard from another attendee that she attempted to attend some networking sessions on the show floor, and the acoustics made her leave.  This is no news to me, as I had the good fortune to welcome Ralf Goetzinger to two back-to-back networking sessions, and it quickly became 'I can yell anything louder than you can...' which, needless to say, is not conducive to focused learning.  So my vote is strongly in favor of No More Basements.

Not that networking sessions are *much* easier when the conference is held on the upper floor, but at least we can't blame basement acoustics for that.

Thank you, Jelena, for your outstanding blogs, and I am certain some genius will soon dig into that butt matter.

No more basement, please. Based on informal survey, 0% were excited about the location.

Ditto. Not that I don't appreciate a chance to practice my lip reading skills, but the acoustics made it almost impossible to hear the session speakers on the show floor.

Well it's either no more basements or Closed Captions added to the Networking sessions.... and while breakfast was somewhat scarce if you were on the wrong floor I was impressed to see more fruit and yoghurt this year...down with the danishes!

Perhaps you should add a cute sticker award?... contenders this year were the Build rocket ship and the machine learning <Code/Life Balance>

Jocelyn, agree on the breakfast. I was glad to see some tasty Greek yoghurt instead of a supermarket brand variety stuffed with artificial ingredients. If only we could also have more whole grains that would be heavenly. Also was quite impressed with the fancy infused water selections at breakfast this year. As far as the SAP conferences go, TechEd is a foodie paradise!

"Come for the tech, stay for the food!"

Secret tip for breakfast - be a speaker and you get breakfast in the Speaker Room.

as usual this blog not digested by beginner.....

Sorry, don't understand what you mean.