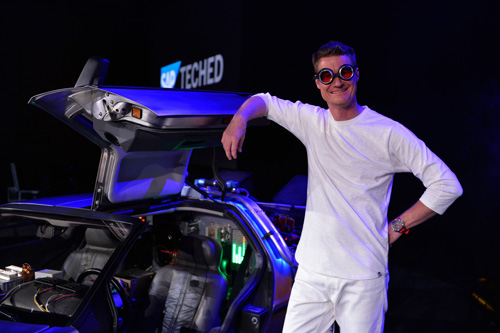 SAP’s Björn Goerke kicked of TechEd in Las Vegas this year wowing a packed crowd with an extravaganza of gifted acting, inspired, real-time digital application development, and yes, singing powers extraordinaire. Masterfully taking the theme from the iconic 80s film series, “Back to the Future,” Goerke’s keynote was pitch-perfect from the moment he powered onto the smoke-filled stage in his cosmically battered, but resplendent slate gray DeLorean, to the series of on-stage applications he developed, to the last guitar riff of Johnny B. Goode performed live by the TechEd Jam Band that closed the night. In all, Goerke effectively showcased how developers can easily integrate data for innovation using SAP S/4HANA, and build extensions on the SAP HANA Cloud Platform for successful digital transformation now.

I caught Goerke just as he left the stage to deafening applause, (having channeled Huey Lewis and the News, singing the above-mentioned film’s theme, “Back in Time), and he shared the three most important takeaways for developers at this year’s event in this VIDEO interview.

Clad in all white like the eccentric scientist Dr. Emmett “Doc” Brown in the original “Back to the Future,” Goerke’s quest was nothing less than brilliant: how could he harness enough gigabytes of energy to power his car into the future at the exact right instant using data from SAP HANA? For over an hour, he took the audience on a journey of agile application development, culminating in his ability to capture enough solar panel energy from power grid data that would feed into SAP HANA, propelling his return to 2036.

Throughout his on-stage musings (“SAP TechEd, is that some kind of algorithmic ritual for software geeks?”), Goerke remained laser-focused on detailing how the latest SAP HANA Cloud Platform updates allow developers to easily connect data from the front and back end, as well as to on premise systems on multiple devices, spotlighting mobile capabilities using SAP Fiori. The results are more collaborative, agile cloud-based innovation for a best in class user experience with best in class business processes.

Where civilization began and the future starts

Noting that this is the 20th anniversary of TechEd, Goerke encouraged the audience to move from classic database ERP systems to SAP S/4HANA in order to be ready for the future. No one objected to his flawless reasoning. “Some say civilization started with fire or the wheel. But if you look at it objectively, civilization clearly began with SAP ERP, since all the important info resides in there.”

He proceeded with a tour de force demonstration of how easy it is for companies to transition to SAP S/4HANA, from readiness and preparation through system conversion and data consolidation. Likening the transition to clean-up in preparation for a household move, Goerke said that “SAP S/4HANA is the new digital core of SAP, allowing developers to create new scenarios − whether consumer-facing, IT or analytical – for innovations not possible with traditional ERP applications.”

At the same time, Goerke emphasized that the SAP HANA Cloud Platform is the centerpiece of SAP’s strategy, extending and integrating all of the company’s solutions. In a series of real-time demonstrations, Goerke spotlighted how developers can use APIs to connect rich metadata for innovations like internet of things applications, (his DeLorean was filled with sensors that required energy for his trip home to the future), transforming business processes for employees and consumers.

Developers greeted Goerke’s announcement of the SAP HANA, Express Edition with a cascade of applause, pleased with having more ubiquitous access to a lightweight version of the platform where they can build applications free of charge on their choice of a laptop or desktop, offline and in the cloud.

Goerke shifted into live innovation overdrive with thousands of audience members joining him in shaking their cell phones to pull data from SAP HANA from the SAP Accelerometer app, ultimately harnessing sufficient energy to drive off the stage in impressive clouds of smoke.

Find out more about SAP TechEd