Oh boy, the breakfast on the third floor was a bloodbath this morning. I arrived 15 minutes before the 8 am session to find almost empty plates and hoards of hungry TechEd attendees. The conference staff was yelling that there was food on the fourth floor. But people were on the third floor and sessions were on the third floor, so running around with plates of food didn’t seem appealing to most people. I pondered if someone could’ve used the data from the attendees’ agenda builder and fed that to the Sands expo center supply chain system maybe that would have helped to place the food where people would be? If only some kind of technology existed to facilitate that sort of innovation…

First session of the day TEC102 (A Comprehensive Introduction to SAP HANA) was terribly popular, people were lining up against the wall just to listen in. All things considered, speaker did pretty good job balancing between the introductory level and comprehensiveness. And while one would think such sessions should hardly be needed these days (SAP has been talking everyone’s ears off about HANA this and HANA that), I suspect that SAP might have shot themselves in the foot by adding HANA to every product. For example, one of the first follow-up questions was “what’s the difference between HANA and S/4HANA?” It might seem obvious to some readers here but, as the presenter noted earlier, there is such product as HANA Vora that really has nothing to do with HANA, ha-ha-ha.

Later in the morning I stopped by TEC220 (McInnis’ Journey to SAP S/4HANA), which was a good, well-prepared session. But it was a bit disappointing to find that it was about a “greenfield” implementation at a new company, so there was nothing about migration of legacy stuff that would’ve been of particular practical interest.

I ditched UX127 session in favor of a guided tour for SAP Mentors to the Innovation Center Network and Machine Learning booths. We did not have such tours last year, as I recall, and, surprisingly, I quite liked it. Since these were the official SAP booths and they didn’t offer any cute stuffed animals I likely would’ve never stopped by otherwise. But we had some interesting conversations and demos with the team there (unfortunately didn’t capture their names). Very much appreciated.

After that I made an attempt to join some networking sessions but, just like yesterday, it was so difficult to hear that I had to retreat. My own session at 4.30 pm went smoothly though because there was no other sessions running nearby and I didn’t have to out-yell other speakers like on some oriental bazaar. Also only few people showed up, which made for a more intimate conversation. Phew.

Whoever scheduled the session TEC104 (ABAP Road Map) to start on the 5th floor 15 minutes before the Networking Dinner clearly didn’t want anyone to attend it. The whole floor was like a ghost town but the session turned out to be quite well attended, considering the timing. I bravely sat through about 20 minutes before dozing off and at this point the allure of free wining and dining became irresistible.

Wednesday night at TechEd is the best because in addition to free dinner it means The Fiori Jam band and Demo Jam. This year Demo Jam was in the same basement as the whole event, which I thought was a bad idea due to acoustics. But, on a bright side, we didn’t have to leave after drinks, so I was able to just continue lively secret conversations with some SAP folks. I can’t share the details here but Oliver Kohl bravely committed to posting a blog soon and now it’s official. Stay tuned.

I’m traveling home tomorrow afternoon, so the last blog will have to wait for another day. For now I’m leaving you again with some random event pictures. 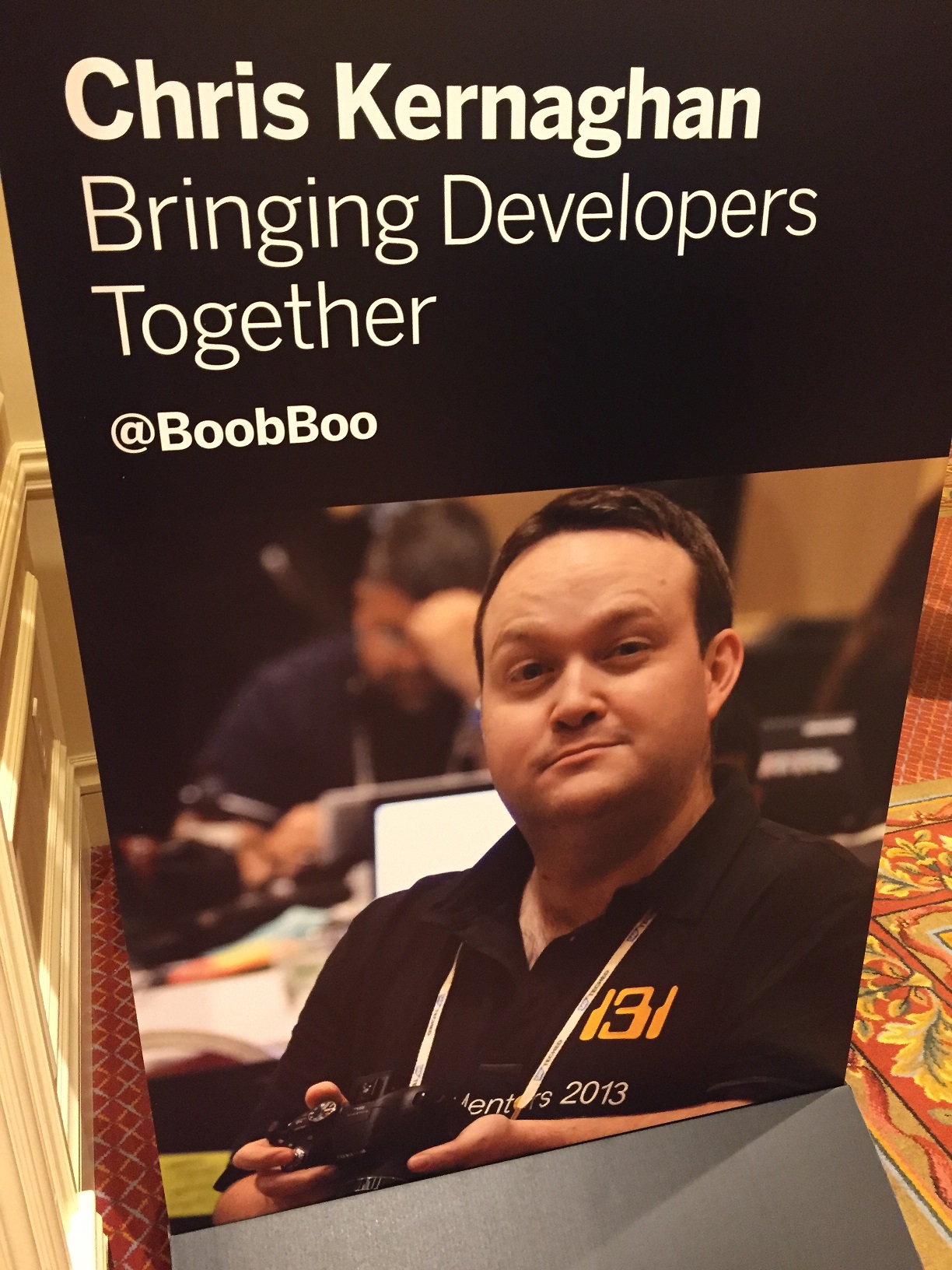 Found Chris Kernaghan on the 3rd floor. Who else could possibly rock such twitter handle? 🙂 We missed you, Chris! 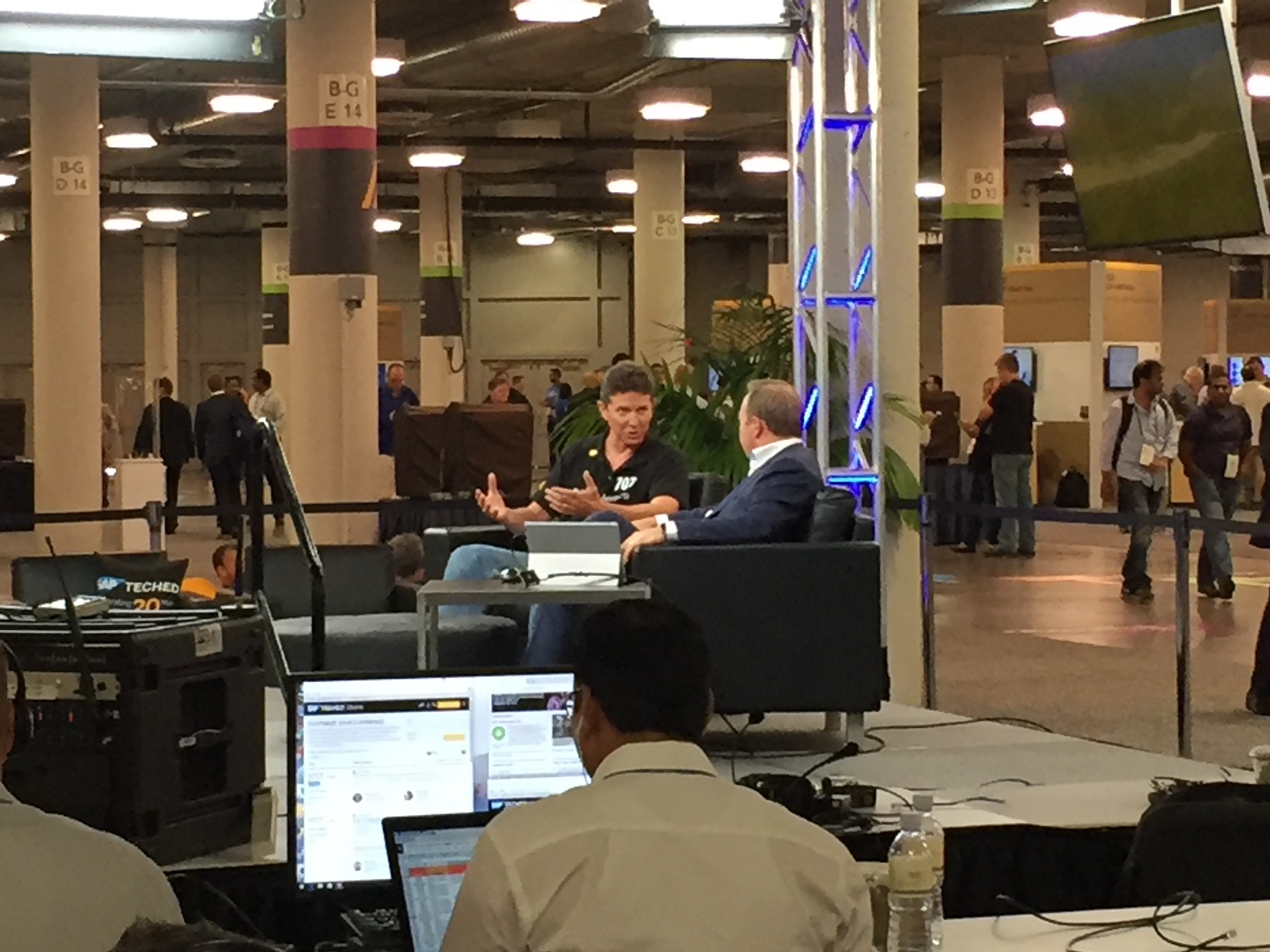 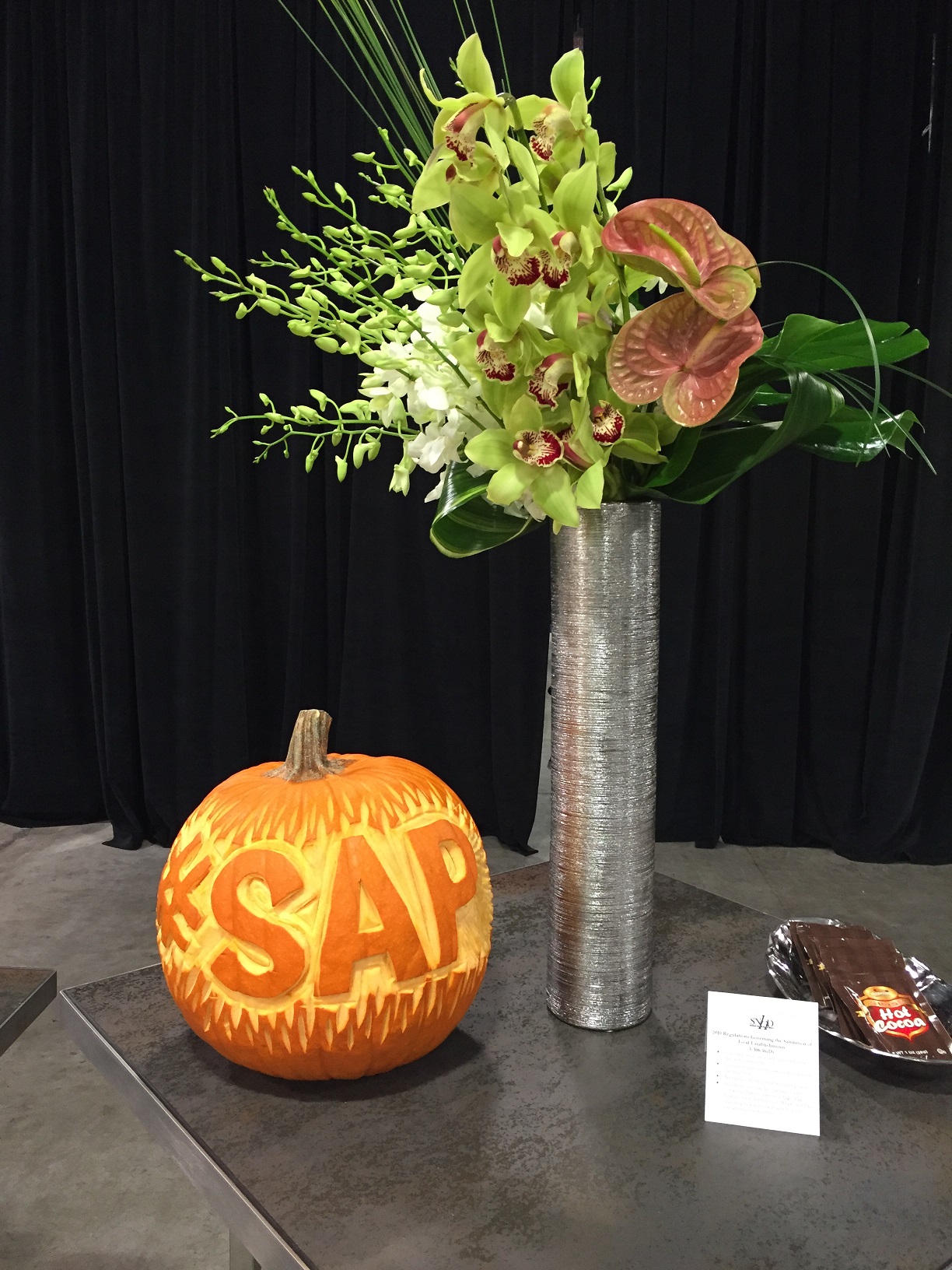 Fancy arrangement on the snack table. 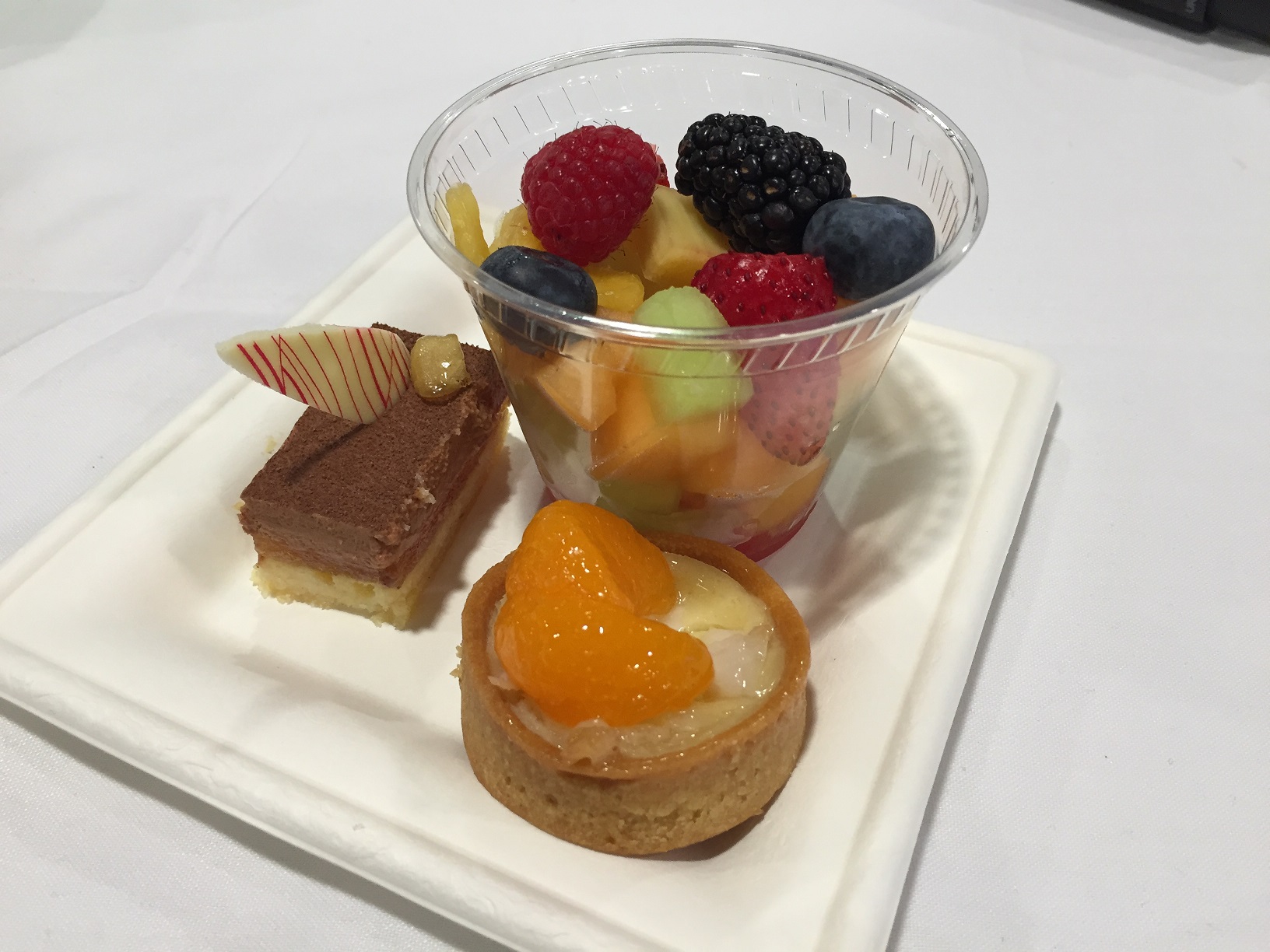 Today’s dessert. (Food was really fantastic, by the way.) 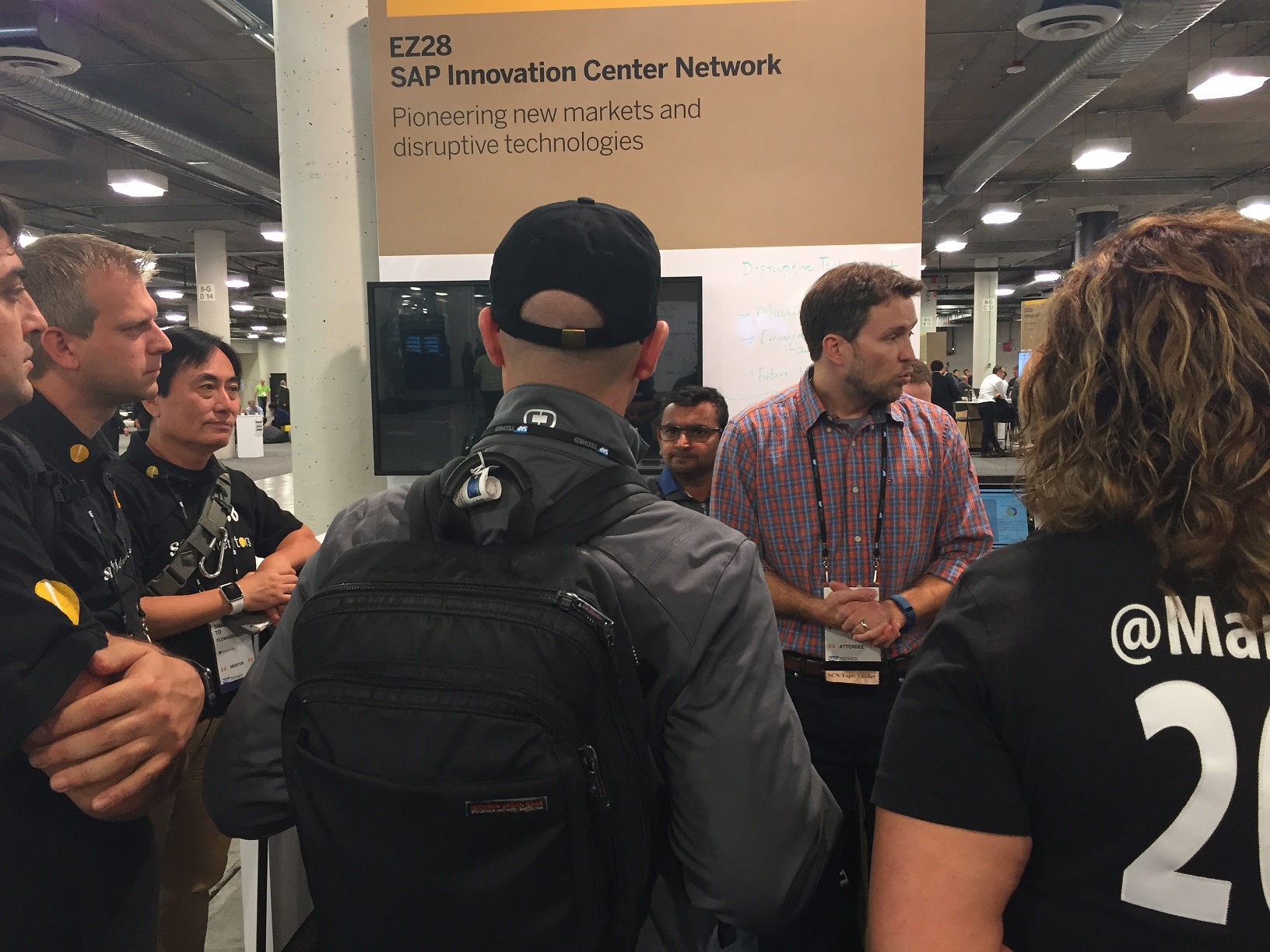 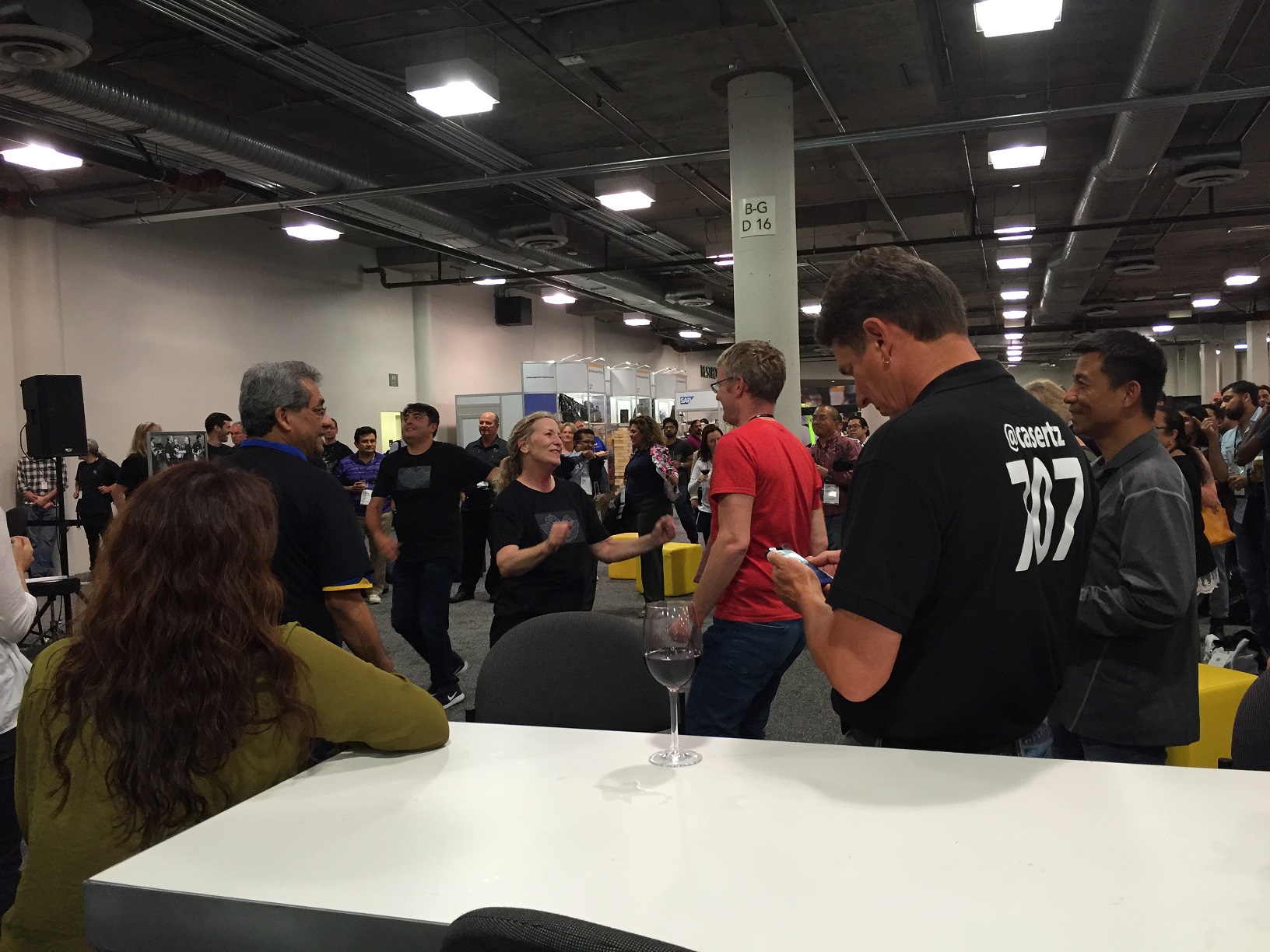 As you can see from the picture, I was also hiding behind a table there. 🙂

In my defense, I was probably at that moment trying to see if my phone, which was literally falling apart, still worked (it did). Though I think it was actually after this point when I dropped it on the floor (while dancing!), causing the screen to separate even further from the case.

Jelena, the photo you obtained of my interview with Andy is the best yet (of me, anyway -- Andy fares much better in most of them). I'm going to shamelessly steal it. 🙂

HANA Vora has nothing to do with HANA? did i read this correctly? i think it does (a lot), so i'm wondering why someone presenting would not see what they have in common.

The session was not recorded, so I don't have the exact verbiage but the point was that while, for example, you do need HANA to run S/4HANA but HANA is not required to run Vora.

Do you need SAP HANA to run Vora?

Absolutely not. Vora is a standalone piece of software. There are use cases where SAP HANA won’t be installed alongside Vora, and SAP HANA and Vora run most efficiently on different types of hardware.

P.S Gotta love the fact that official information from SAP requires John Appleby's blog on top of it to be understood by the customers. I bet SAP would love to rename him John HANA Appleby if only they could. 🙂

actually both of you are correct (in a way)...

SAP Vora (I also do not like HANA becoming a brand trend) is really independent product you could use without SAP HANA.. It is adding some nice features that could be used by Data Scientists to better analyze the data stored in Hadoop... IMO it is good move as this way SAP is not limiting target segment to only those companies that are already embracing SAP HANA but is allowing for much wider use...

On the other hand you will get biggest benefit from SAP Vora if used together with SAP HANA as its main purpose is to connect these two worlds together - to allow you to consume and join the data from Hadoop with your SAP HANA data in better way then via SDA... but it also allows Data Scientists to access SAP HANA data from Hadoop side... so bi-directional data access...

We have been running SAP Julie in our company for over 20 years now and find it to be completely dependable.  Profits especially soared north after our electrification project last August.