SCN Missions Coming to a Close

As you are probably well aware by now, our community, SAP Community Network, is being redesigned and moved to a new platform as part of SAP’s One Digital Experience.

In her blog post, Caroleigh Deneen provided a glimpse of some of these changes and how they will affect our Reputation Program, especially where missions and badges are concerned. In a nutshell, the changes coming to the community will require that the SCN Team retire the current set of missions and badges, and that we put together a new set of missions for the new community experience.

When Will the Current Missions End?

The biggest question you have at this point is probably: What is the last day I can earn missions in the current SCN? That date is Monday, October 3, 2016, and all activities done by 12 noon PDT (Pacific time) that day will count. At 12 noon that day we will end the missions.

Your next question is probably: When will I be able to earn missions in the new community? The new community launch, as announced by Head of Community Experience, Gali Kling Schneider, in this blog post, will happen on Monday, October 10. We plan to launch a new set of missions several weeks after that, sometime in the November time frame.

Why are we launching the missions later? Well, so many things are changing in the community as we move to the new platform that we want to give members several weeks to get adjusted to the new functionality and features first. When the moment is right, we will introduce the new missions.

What will happen to the badges that members have earned before launch of the new community experience?

As Caroleigh explained previously, members will not lose their already-earned badges (yay!). All of a member’s badges that were earned prior to launch of the new experience will be displayed in a separate area in the member’s user profile after we go live.

You can see this in the community beta already. When you go to your new profile in beta (see my recent blog for instructions on how to find it), in the left-hand side under the new badges, you’ll see a link called “Show All Reputation…” 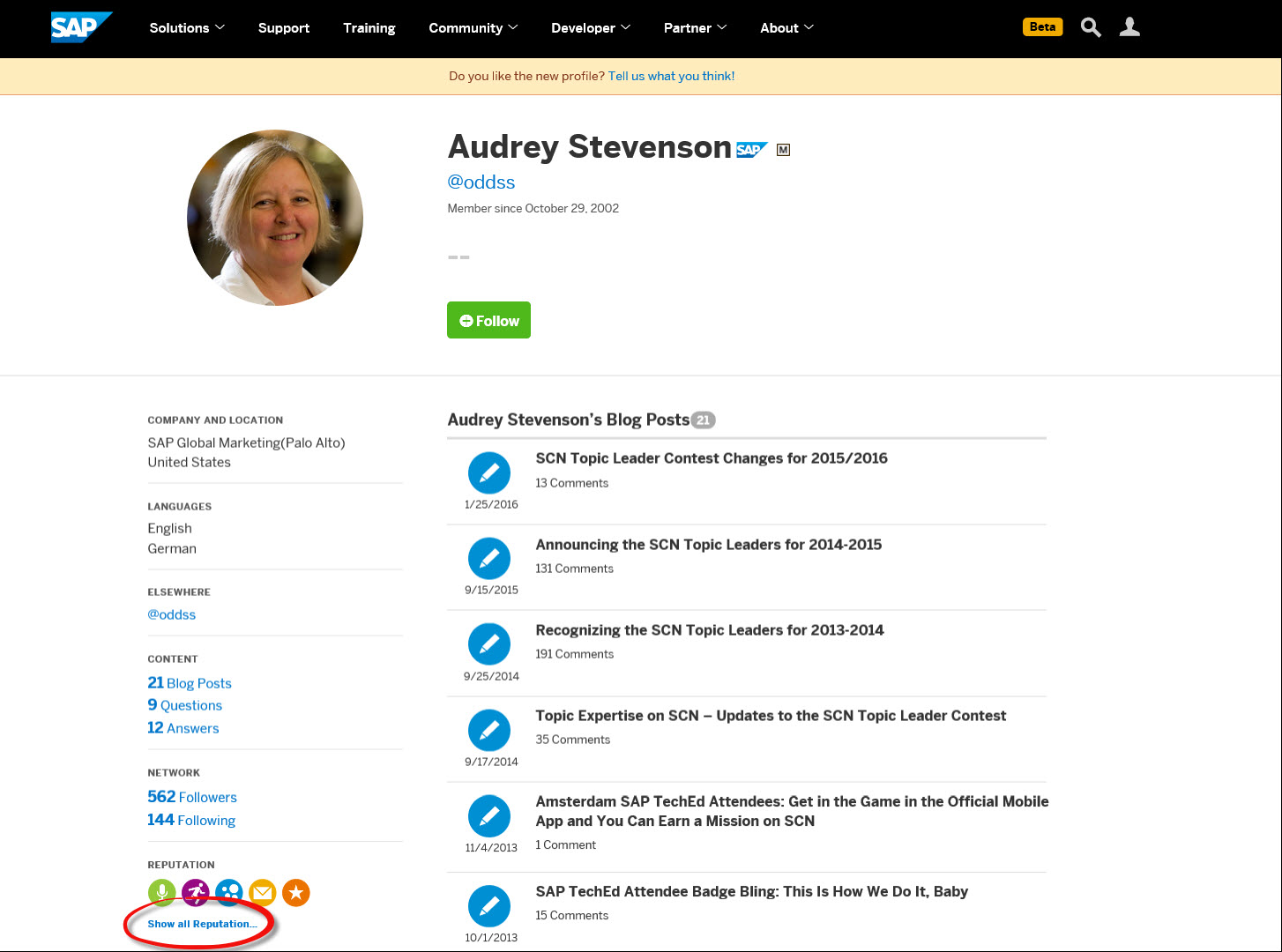 Click on that link and the reputation section of your profile will display. For example, here is a screen shot of my reputation in my new profile in the beta. You can see the section for the legacy badges underneath the section where the beta badges are shown. Which Missions Will Be Retired?

One group of missions in our mission set that will need to be retired are the missions associated with the various content types of our current platform, such as the Tutor series for documents, the Answer Hero series for questions and discussions, and the Storyteller series for blog posts.

When we launch the new blogging system and Q&A system, these existing missions will no longer work because the activities on which some of the requirements are based are not available in the new platform. So we are putting together a new set of these core content missions, designed to work with the platforms we will have in place when we launch the new community experience in 1DX.

Another group of missions that will need to change is the Onboarding missions, such as First Steps, and the Ready, Set, Go series.

The Developer Journey and Maker missions will also be retired:

And of course, the Beta Tester Mission will need be retired:

Space-specific missions (missions whose requirements must be filled in a particular space) will also need to be changed, since spaces are being replaced by the tagging concept (see Brian Bernard‘s blog post for more information on this). These include the Learning Hub missions, the ABAP in Eclipse missions, and others.

There are several other hidden missions that will be retired, including Pay It Forward and Thought Leader.

Also, after careful evaluation by our gamification team, in conjunction with the Reputation Advisory Group, we have identified four badges earned prior to launch of the new experience that are planned to be “ported” so they can be displayed as part of the new, live reputation area as well. These include:

Why only those four? These are the only missions/badges that meet the criteria we set up for determining “portability into the future live reputation”:

SAP TechEd Attendee and SAP TechEd Speaker missions, as well as SAP Inside Track Organizer, Speaker, and Volunteer missions will be re-deployed on the new platform. So you can consider them on pause, to be continued at mission go-live.

We are excited to launch the new set of missions and badges once things “settle down” in the community after the new community go-live.

First of all thank you for the explanation, it is very complete

Do you know if the new set of missions and badges is alredy available? and if it is, Where can I find it?

Unfortunately the roll out of the new mission set is still on hold. You can read more here: https://blogs.sap.com/2016/11/15/launch-of-new-mission-set-on-hold/