There are a variety of available SAP ERP HCM and SuccessFactors landscape models that depict the different stages of the transition from current SAP HCM on-premise solutions to SAP SuccessFactors. What is interesting is how much these models have adapted since 2012, in line with changes in development and market adoption.

An Overview of SAP ERP HCM and SuccessFactors Cloud

I want to take a moment to provide definitions of these various landscape models, shown in Table 1. I also added a model to describe the scenario of full cloud with no payroll as its absence often causes confusion. Table 1 shows the landscape for SAP SuccessFactors in 2016.

Deciding What to Do: What are the Options?

What these various evolutions of landscape models suggest is that SAP continues to adapt to the needs of the marketplace and respond to customer feedback. It also reinforces their commitment to customers and making options available to them along their journey to the cloud. The most resistant customers appear to be those who made large investments in their SAP ERP HCM on-premise Payroll (and/or Time) solutions and that include many customizations. It was obvious to them that the move from SAP ERP HCM on-premise Payroll to SuccessFactors Employee Central Payroll would require both a simplification and a reimplementation to remove those customizations. In my opinion, SuccessFactors methodology and philosophy is based on best-practice design without customization. To take an existing customized SAP ERP HCM on-premise Payroll solution into the cloud and label it Employee Central Payroll would be against that philosophy.

In my opinion, this made the approximate 8,000 companies who were using SAP ERP HCM on-premise Payroll reluctant to give up on their investment and switch to a standardized (uncustomizable) payroll. This, in turn, negatively impacted the cloud adoption numbers, which are very important to SAP SuccessFactors. SAP needed to find answers. Their response was to reach out to three of the largest SAP Payroll consulting firms come up with a solution. (More details about this partnership later.)

During the annual SuccessConnect 2016 conference in August 2016, Mike Ettling, President of SAP SuccessFactors, announced a new offering for SAP customers. This new model allows current SAP ERP HCM on-premise Payroll customers to have their SAP ERP HCM on-premise Payroll solution hosted and managed in the cloud with SAP SuccessFactors Managed Payroll. As noted above, organizations were previously told that as part of their migration-to-the cloud strategy that they would be required to re-implement and simplify their SAP Payroll solutions (remove any customizations) in order to move to Employee Central Payroll. The new SAP SuccessFactors Managed Payroll model allows for movement to the cloud without requiring a reimplementation and simplification of the existing SAP ERP HCM on-premise Payroll system. This is a game-changer for SAP Payroll. This method is one of the most innovative ways of managing payroll systems as it offers a cost-effective pathway to the cloud, whilst retaining the functionality of the client’s existing systems, which is good news for SAP’s 8,000+ Payroll customers.

By migrating payroll to the cloud, companies can significantly decrease the cost of running payroll in-house and eliminate the need for a costly HRIT infrastructure. In addition, companies can move away from a CAPEX model (Capital expenditure: Funds used by a company to acquire or upgrade physical assets such as property, industrial buildings or equipment) to an OPEX model (An operating expense: Operating expenditure, operational expense, operational expenditure or OPEX is an ongoing cost for running a product, business, or system) model.

How Does Managed Payroll Work?

The SAP SuccessFactors Managed Payroll offering is an SAP initiative that is being delivered by three SAP partners: EPI-USE Labs, Northgate Arinso, and Accenture. These three vendors, selected by SAP for their extensive Payroll experience, are the only authorized partners who can supply the Managed Services Payroll offering. Managed Payroll is a subscription-based offering wherein SAP provides the licensing and software support, and the partner provides the hosting, support, and AMS services through a contract with SAP.

This arrangement allows companies with existing SAP payroll systems to stretch their SAP ERP HCM on-premise investment dollars. This solution does not require a payroll re-implementation, as is required with a move to SuccessFactors Employee Central Payroll. The offering, available on SAP’s Price list, includes a lower risk for the organization than a complete re-implementation and it gives companies a way to move their on-premise SAP ERP HCM system into the cloud at a managed pace.  Companies will benefit from no longer having to manage the SAP hosting, Basis, and functional support with various vendors, as everything is covered under one comprehensive SAP contract. The costs for Managed Payroll may replace the continued costs of maintenance, hosting, AMS, and other related IT costs (integration, audits, analytics, and so on).

If you want to see the full keynote speech, including Mike Ettling’s announcement, follow this link: http://www.sapsuccessconnect.com/en_us/las-vegas/keynote-general-session.html.

Why Shift to Managed Payroll instead of Employee Central Payroll?

You may be asking, what is the benefit of Managed Payroll as opposed to deploying SuccessFactors Employee Central Payroll? 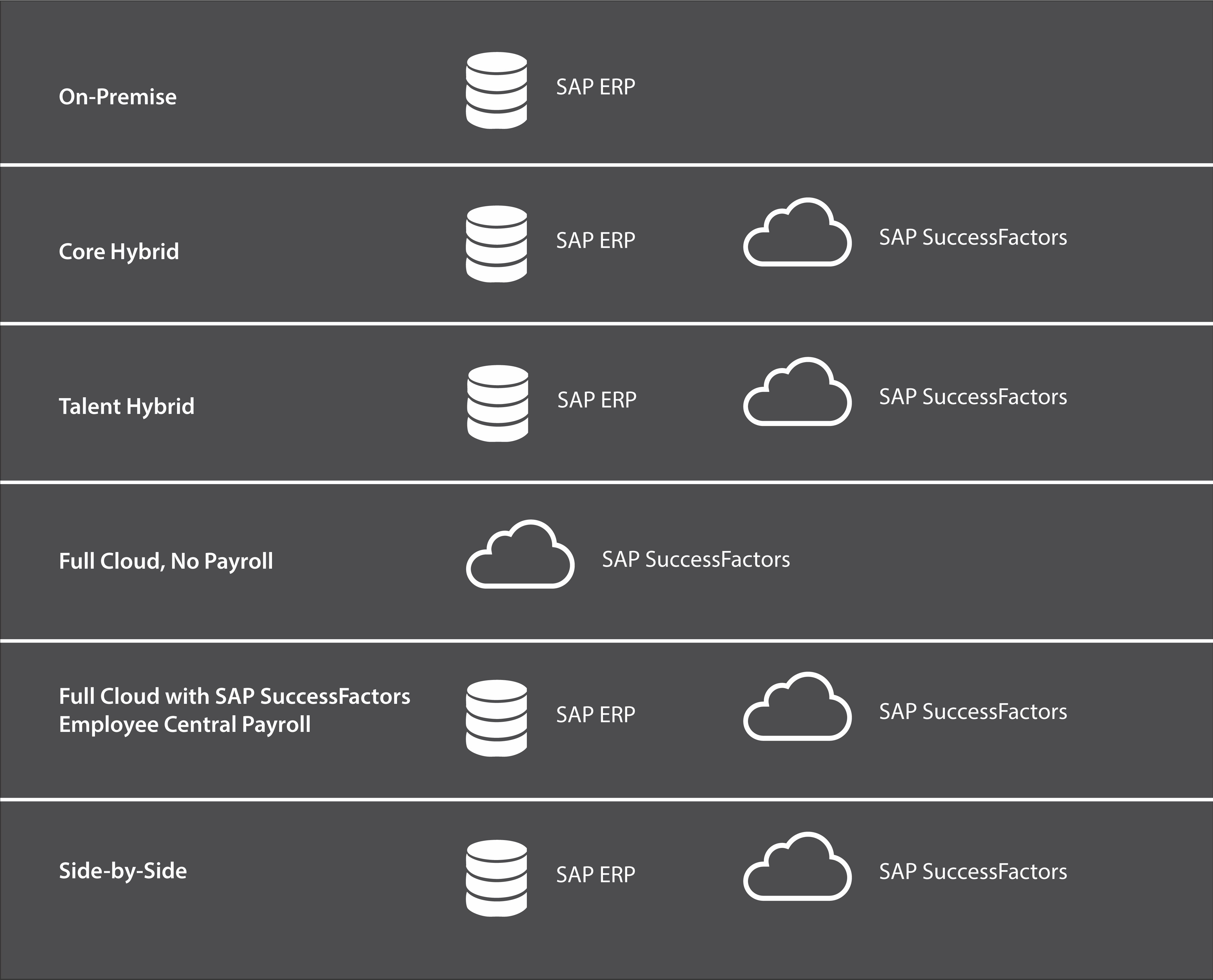 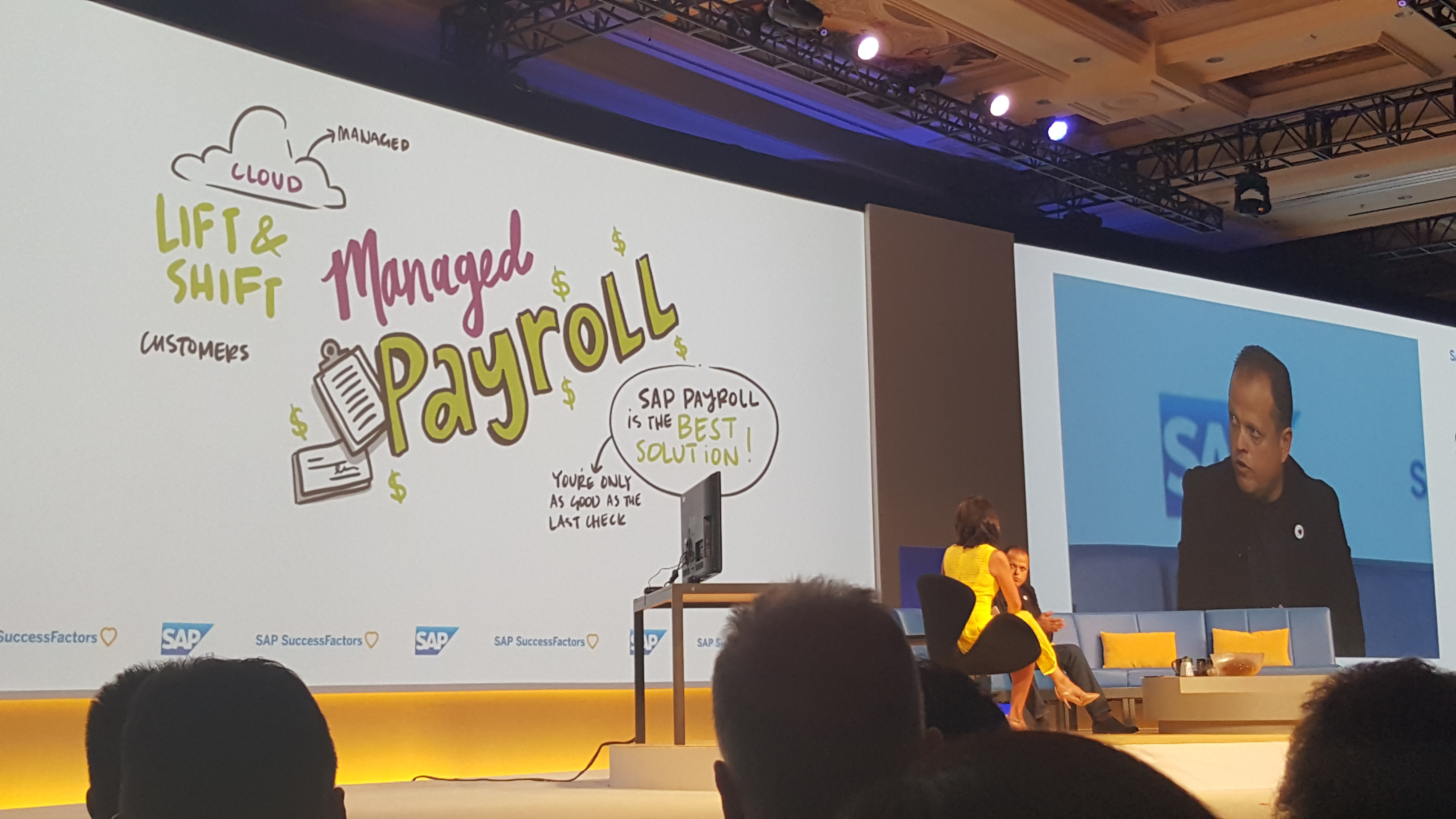 It’s an exciting time to be in SAP SuccessFactors HCM and to acknowledge that they do a very good job of adapting to the market needs.  The various models depicted in the graphic above describe the options available for SAP HCM customers today.  They may change again over the coming years although I think this is the best position we have been in to date as SAP HCM Customers.

Wonderful article.. just the one which we are looking at implementing for my client.. Hope Managed Payroll will support our needs to uplift existing payroll into Cloud.