Every year the TechEd journey for me begins at our provincial RDU airport. Weather is bad and the flight is delayed by 30 minutes. Of course, I find this only after arriving at the airport. As I’m standing in the middle of the terminal, I get a phone call from unfamiliar 800 number. Oh, it’s Southwest Airlines telling me that my flight will depart 30 minutes later. Wow! I wonder how many of their IT people had to work 12 hour days to implement this valuable piece of technology…

These are interesting times we live in, folks. I could’ve arrived at the airport in a car that pretty much drives itself and I’m going to a conference where no doubt my ears will bleed from hearing all the latest and greatest on how IoT and predictive analytics in the cloud are helping digital revolution achieve the chi level of over 900. But when you try to connect to free wifi at the airport, you are first directed to some shady looking site. Then you click on “connect to free wifi”, then another tab opens and you have to confirm that indeed you want to connect to wifi, then yet another tab tells you that you have 45 minutes. And, oh wait, don’t even think about closing this tab because it must be open to keep track of time. But no worries, after that you can get another 45 minutes for free. And the first thing you do reflectively? Of course, you close that stupid tab that you were just told to keep open.

While waiting to get off the plane, I watched through the window as a Southwest employee was unloading the bags from a conveyor belt and then checking the tags against a piece of paper to put the bags on a right cart. I’d be all over this account with IoT stuff if I was an SAP sales rep.

From the airport, the taxi drove like we were auditioning for GTA Las Vegas. 30$ well spent and I highly recommend this attraction if you are afraid of flying. Although you might become afraid of driving instead.

Unless you are attending the pre-conference sessions, the only entertainment at TechEd on Monday is the executive keynote. Apparently no one reads my blogs because again this year there was a piece of paper on every seat: This needs to stop. Seriously.

This year the first keynote was delivered by Björn Goerke. Back in 2013 at TechEd I happened to sit next to him at a presentation and at the time I had no idea who he was. Not sure if it was his tailored suit or faint scent of aftershave or a twinkle of sharp intellect in his eyes but for no apparent reason I thought: “wow, this dude is going places!” And indeed places he went. (I’m in town till Thursday if anyone is interested in the executive aura readings.)

After the smashing success of the Barcelona keynote last year I can only imagine the pressure Björn Goerke must have felt to out-do it. The Venetian Ballroom was abuzz with excitement that soared to the unseen levels when the titles (yes, there were titles) started rolling in. It was clear Björn Goerke was doing the movie again, the only question was – which one? When I saw the background and smoke started to fill the stage my first thought was: “OMG, OMG, he’s doing The Terminator!” Be still, my beating heart!

But then instead of Björn Goerke in a birthday suit from the smoke emerged… a DeLorean. Ugh, he’s doing “Back to the Future”. 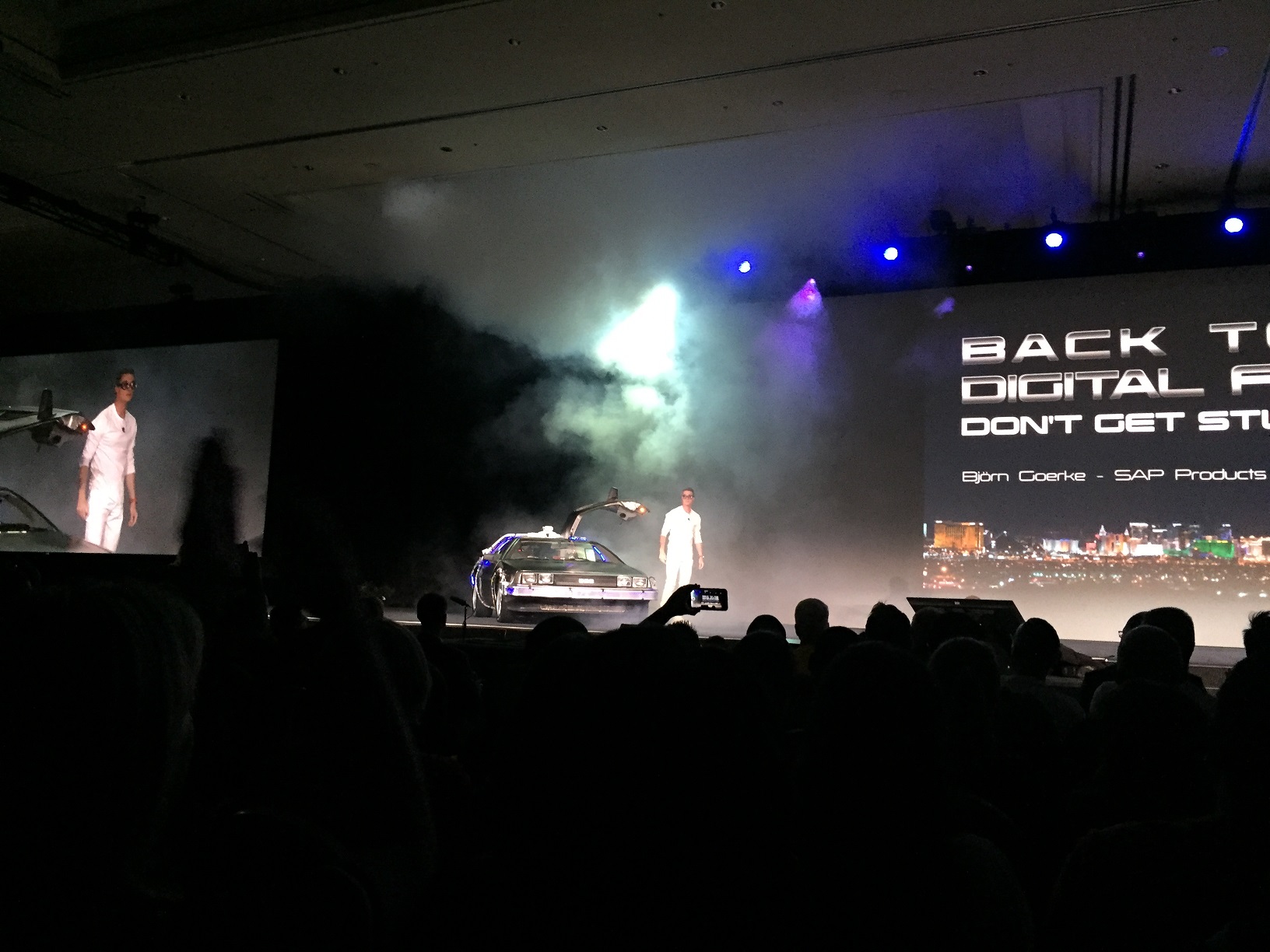 OK, still there is some potential. So supposedly now he was Marty McFly who needed to get back to the future (or get Doc there – the story got fuzzy as it went) and to do that he needs, of course, 1.21 gigawatts of electricity. And what is the best way to find it in 2016? No, not a nuclear plant. It’s the chart!

This is where the plot line got a bit confusing. Mr. Goerke proceeded to show some steps that seemed eerily familiar to me from the openSAP Fiori course. It started with setting up some cloud connection and ended up with what looked like a Launchpad. Then there was also, of course, a map with dots and “oh look, how quickly it’s pulling the data”. At some point it felt like I was the one traveling back in time. Is entering data on one device and then accessing it on another still something revolutionary these days?

However, Mr. Goerke clearly had good time doing the live demo and it seemed appreciated by some people in the audience who apparently understood more than me about what’s been happening. And credit has to be given for the surprisingly well performed movie soundtrack (accompanied by The Fiori Jam band) at the end: 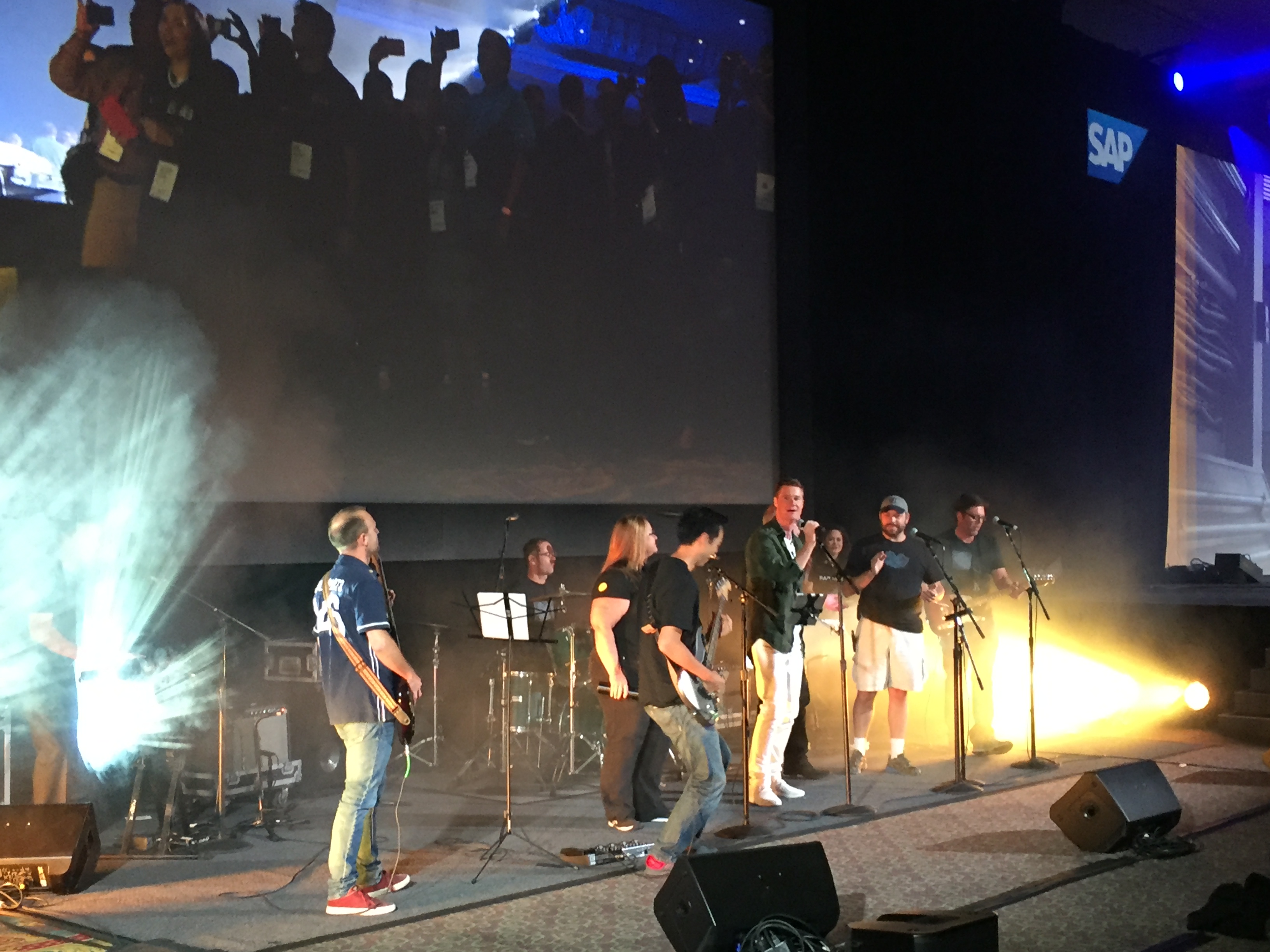 Oh, there was also an announcement about some SAP HANA Express Edition that got every geek in the audience super excited. “Snap it, work it, quick, erase it…”

And for me there is still hope for The Terminator next year. Good things come to those who wait, you know.

I have attended several techeds, I agree with the executive keynotes. "Executive" is a word I dont see it can couple easily with Teched, at least what I would love teched to be.

Teched has a lot roadmaps, but it takes me 5 mins to read a roadmap from the sap webpage compared with the 60 mins lecture in a teched, including the typical Q&A like "is that faster than the previous version?" Of course it is, its in the PPT.

SAP has some other forums, like sapphire, or dedicated forums for HR or whatever, which I believe its great to sell to the business.

In teched there should be no business, there should be tech. and techs we dont wear tie, we should not be used to read PPTs that say "HANA is 10.000x faster", but there is a big portion of that.

Honestly I thing that seeing an slide from SAP saying that HANA is 10000x faster is self-defeating.

In my dream SAP should come and tell us; this is what is coming, plain. Webdynpro JAva is dead, dont focus there. Fiori is a cool, but companies have only migrated a 2% of the total UI to Fiori, still green.

I feel some anxiety in the devs area, specially the old school ABAP devs, same with Portal consultants, or BW consultants, I think that SAP could be more "straight to the point" in teched, because that should be their target of people. the ainxiety comes because there is ambiguity and ignorance of what is really coming or its just a marketing move to see if the market reacts.

this is what they demand to know, so people embrace the new technologies and can re-orient their companies/careers from a tech point of view. Find a way to make people part of the new era of technology.

In my dream SAP should come and tell us; this is what is coming, plain. Webdynpro JAva is dead, don't focus there. Fiori is a cool, but companies have only migrated a 2% of the total UI to Fiori, still green.

That would be my dream too - a little honesty, clarity and plain language. It can still be found but not in the official documents. That's why people go to the roadmap sessions, because in those precious last 10 minutes when you ask the questions to the presenter you can finally find some clarity. There are things PPT won't tell you but off record you can learn quite a bit.

To be honest, I enjoyed Bjorn's keynote. I agree the plot got a bit fuzzy along the way, and perhaps the whiz-bang DeLorean arriving in smoke was a bit over the top, but it's cool to see an executive do a live demo like that, not quite as closely scripted as a SAPPHIRE keynote might be, with even a few warts and mishaps that he navigated around pretty well. Was it perfect? Absolutely not. Was the beginning very confusing, where at first it seemed he might reprise the "Martian" keynote? Yes, yes it was. But overall, it was entertaining, and it got people into the spirit of things, which for a keynote the evening before things really start is pretty much the point, no?

And the Fiori Jam Band was just plain awesome. And again, points to Bjorn for stepping in and singing with them, even though he's not a musician.

I actually very much liked the arriving in smoke part. 🙂 Was hoping there would be more of that, so for me it kind of fizzled. After talking to other people about it, I believe that the keynote may have been perceived differently by the geek and non-geek population, so to say. While the geeks and "geek inclined" applauded the audacity of a live demo and were entertained, the others (like me) who expected more of a show (we're in Vegas, after all!) got bored and confused.

However, what I liked was that at least Mr. Goerke had guts to tell marketing department "I'm an executive and I'll do whatever I like in the keynote, so stick your buzzwords up [incomprehensible]". The closing statement and Fiori Jam Band did help to finish it on a high note, I agree.