Sharing my day of experience at Tom-Tatze-Tierheim walldorf Germany as part of SAP’s CSR Activity along with Metropolregion Rhein-Neckar on 17-September-2016.

The ASPCA Wiesloch / Walldorf with its Tom Paw shelter operates now for over 50 years for the animals there. As non-profit organization, it is responsible for five municipalities. It provides shelter for various animals like ducks, dogs, cats, birds and Rabbits. Tom-Tatze-Tierheim also provides pension services to your dogs during your vacation time. You can find more information of the organization here.

The Tierschutzverein initially planned for the project ‘A new home for our Feathered Friends / Neuer Raum für große Flügelschläge’ on this day. After receiving the overwhelming participation of Volunteers from SAP and other MRN, Tierschutzverein planned many other activites for the day, which includes Painting the area for the new Home, cleaning the area of Tom-Tantze-Tierheim, adding the block separator in the doors of Shelter dogs.

The event was well organized with the required materials, tools and other machineries for the activity in well advance along with the safety precautions for the volunteers. Tierschutzverein have also arranged for snacks, drinks, and food during the entire day. Participation is open to people from SAP & MRN along with their family members.

Volunteers had formed multiple groups who carried different activities like painting, cutting the woods, cleaning the garden area, etc. in parallel. Myself and my wife who joined this volunteer day was lucky to take up the activity of fixing the block separators in the doors of shelter dogs to avoid them look at each other and make some bark. We as an owner of the dog can understand how importance it is to keep the neighbor dogs calm avoiding the unwanted contact with each other especially when they do not like each other. We spend most of the time during the day sitting inside every shelter rooms in Tom-Tatze-Tierheim while doing our work, also experienced the life of a dog at shelter.

The other groups of volunteers participated in cleaning the area inside shelter by removing unwanted bushes of plants, removing wastages and the old materials, thus bringing more clean space for the pets to play around. While the other group nicely painted the place where the new home for birds was planned to be colorfully.

During the event, we also got a chance to look at the entire shelter and understand the operations of the same and various facilities in Tom-Tatze-Tierhiem. It was also nice spending time cuddling with some cute cats. However, we tried to spend time with multiple dogs over there and we deeply wish each dog here would get some family to take care of them sooner.

With closing of the day, we had a cake cutting for the ‘Freiwilligentag 2016’ and also captured the moment of togetherness with the completed new house for birds and bid byes to everyone. It was nice meeting many new people and working together with them. Some pictures of the main activity from the day. 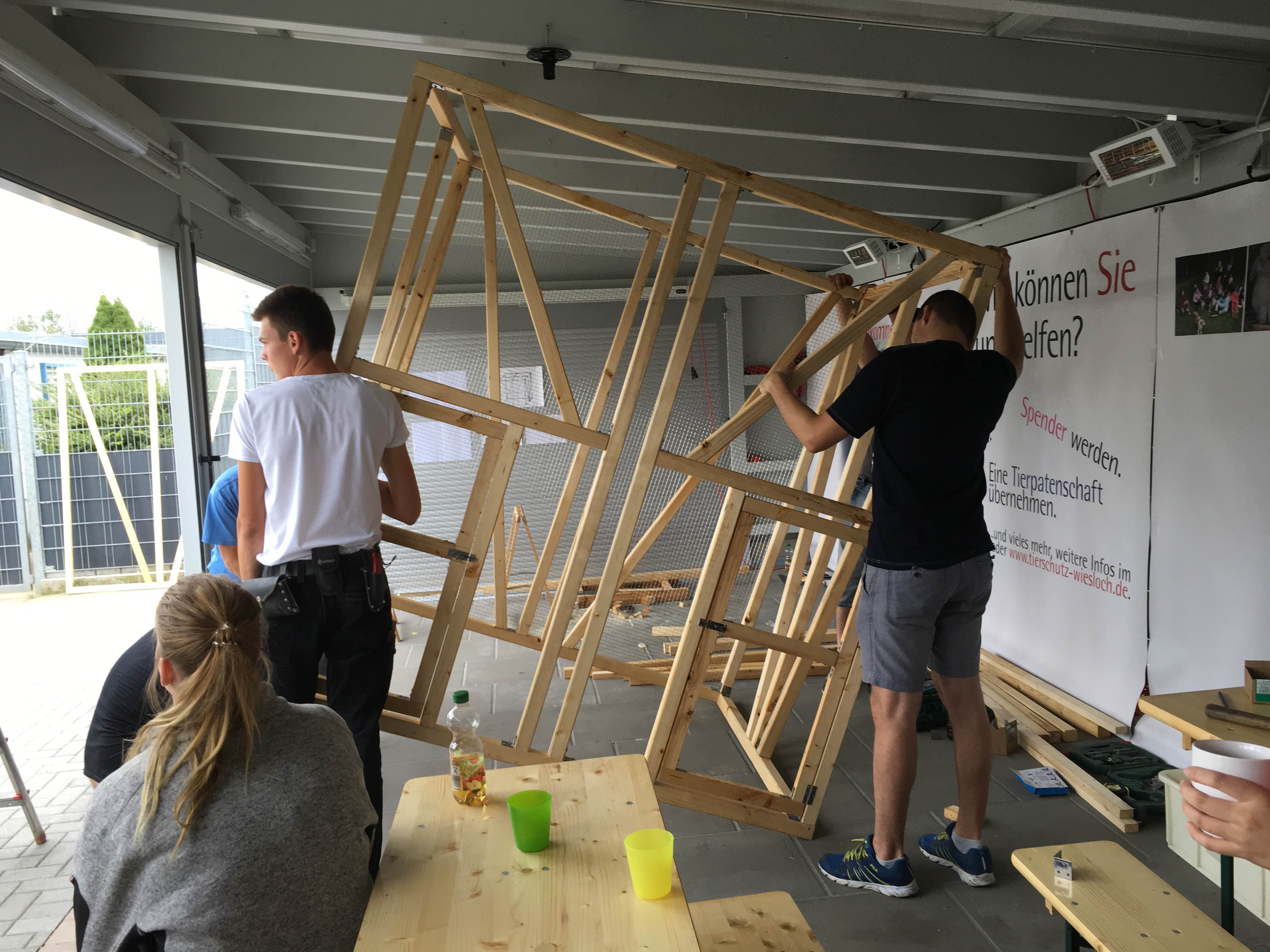 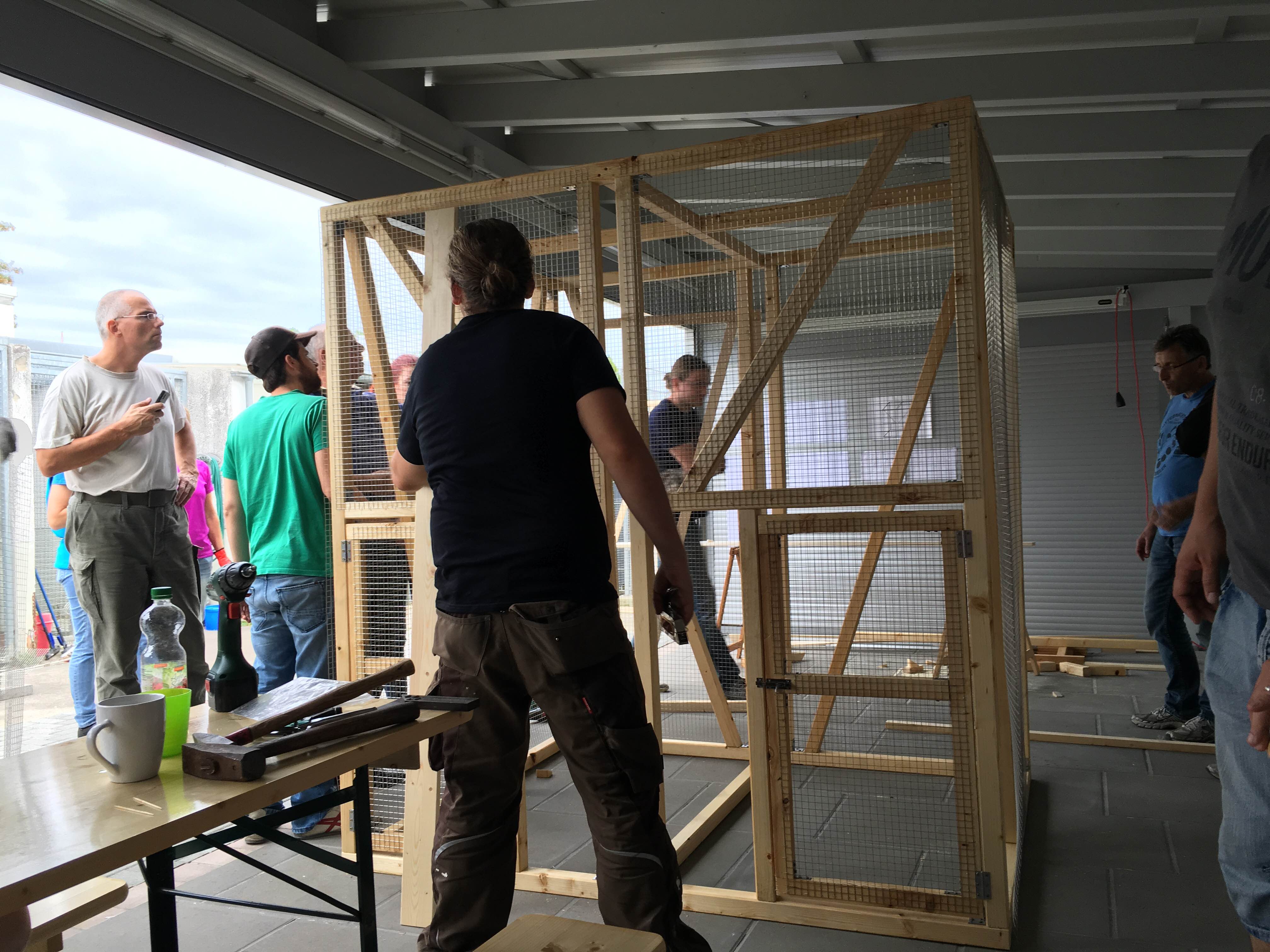 For volunteers like us it was just a day of activity outside our home but this would definitely bring a change in someone else’s life. Being a dog owner living in walldorf, I am sure some or other day I would be in situation to drop my dog there in shelter for my vacation and then I would be satisfied knowing the fact that he would be safe in such a place. At the end of day, the staff from shelter was more confident that this amount of work would not have been possible without support from SAP’s CSR and MRN. I would like to thank SAP CSR Deutschland for the same and I wish every one of us would participate in the upcoming events.