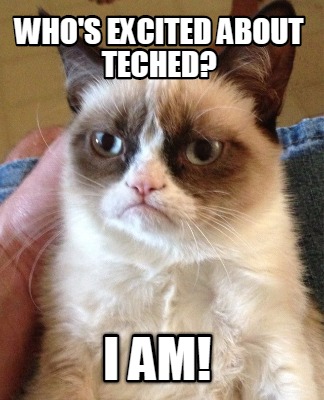 Here we go again, it is a pre-TechEd week and I have to clone myself to get ready for the event while also taking care of all the problems people just have to pile up on you when they hear you will be gone for a few days.

This year marks the 20th anniversary of the TechEds but somehow it does not quite feel celebratory. For example, instead of being located on the glamorous main level of the Sands Expo Center, this year the showfloor moved to the basement that is politely called “low level”. And it’s not one of those cool “geek chic” underground establishments but just a regular basement that used to house the regional nuts and bolts sales conferences while TechEd was partying upstairs. (I guess nuts and bolts people got fed up by the noise.)

Then on Thursday instead of a concert there is, essentially, a karaoke party in a bar across the street. I’m actually quite happy about this because I’ll have to leave on Thursday afternoon and won’t feel sad about missing some epic concert. Finally some good thinking on the SAP side.

Anyways, we are not going to the event to party (cough-cough). If you are attending TechEd in Vegas and somehow missed the awesome Mentor prep session on Monday, I highly recommend watching it or at least reading Tammy Powlas‘s summary.

This year there will also be a special treat (did I say it was not celebratory enough? OK, scratch that) in form of a networking session lead by yours truly at 4.30 pm on Wednesday. One lucky attendee will receive a free copy of my book and all other lucky attendees will get a discount coupon for the same book on Amazon. Mark your calendars, folks!

Also somewhere in the dark TechEd corridors there might be a poster with my picture as one of the “developer heroes”. Usually about a dozen of those posters are scattered around and you might even get a rare opportunity to take a double picture with both poster and live person. It’s like the TechEd Pokémon (mine is called Speakachu).

As I noted in the last year’s blog, ABAP is as good as gone from the TechEd agenda. This year, one of the very few ABAP related sessions actually sounds like a eulogy: “ABAP contributions to SAP S/4HANA”. So long and thanks for all the fish, err, contributions. ABAP might not be dead yet but it has definitely already moved to Florida and is sitting on a front porch yelling at the kids to get off the lawn.

So it’s only natural that my agenda below reflects the mindset of an average ABAPer who goes to TechEd these days not as much to learn how to ABAP better but to find what else can he/she learn to catch an early lifeboat from the ABAP Titanic.

I had hard time choosing a session to fill in the 3 pm time slot on Wednesday since there are three potentially good networking sessions running concurrently:

Next week I suspect Matt Fraser might provide some event blogging competition. (And I’m already one blog ahead, nya-nya-nya-nya-nya!) From me you can expect the usual stuff like complaining about the keynotes, session highlights and “cutest swag of the day”. Now I just need to re-read the last year’s blogs to make sure not to repeat the same jokes. That would be awkward.

I'm looking forward to catching up with you next week.

A shameless plug for my session that is wall-to-wall ABAP and definitely not for beginners. 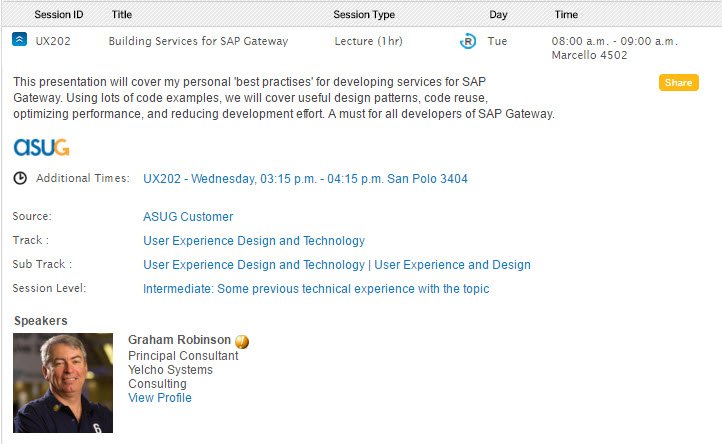 Thanks, Graham! I see you got the coveted Tuesday 8 am spot. 🙂

Has this session been recorded and can be watched as a replay?

Not recorded - as far as I am aware - but you can get the slides and sample code at https://grahamrobbo.github.io/teched16_example/

If you feel like this is 'No country for old ABAPers' imagine how a Workflow person feels.  But wait!!!

There are some Networking Sessions on the Show Floor on Tuesday (from 12:30 - 1:30) and although the title is SAP Workflow and S/4 HANA, I had to do *something* to get the great Ralf Goetzinger to assist :-).

Ralf is also leading a session called 'What have you done for me lately?  Workflow and S/4 HANA' which will discuss an ongoing Customer Engagement Initiative (you know, those thingies where you actually get to provide feedback to SAP) so check the link.

And if I recall correctly, you were one of the first people to help me deface  selfie-selfie-Jelena with my "Developer Heroes" poster last year, so I am looking forward to doing the same with you.  We can then get the posters made into t-shirts and take pictures of ourselves wearing the t-shirts and oh heck you spot the pattern here.

As for you repeating jokes, please don't worry.  Many #jelenas are important enough for new readers to discover, and more seasoned readers to enjoy again.

Oh, Jelena is not only already one blog ahead, but she has an agenda! I don't even have an agenda yet.

i'm not exactly sure what others find interesting in your blog, but to me it simply has good tips wrapped in very entertaining (ascerbic?) commentary. btw, you got yourself another invite to twitter which has even more opportunities for timely, even if laconic, comments.

Have fun at TechEd!

Looks like you're double-booked on Thursday morning or aren't the lectures both at 9:15 am? ^^

As always, I'm really waiting for your blogs on this. Lucky for me, there is already another to read. *g*