The intention of this tutorial is to show how to generate a UI5 application based on Smart-Templates.

This requires an OData service and annotations.

While we’ll be using an existing service, we’ll be going in detail through all the steps required to create the annotations in the ABAP backend.

Furthermore, we’ll be learning how to use the SAP HANA Cloud Platform along with its offerings OData provisioning and SAP Web IDE

In the beginning of our tutorial, we’re creating the annotation model in the SAP backend.

But: what does that mean?

Basically, it means to create an ABAP class and overwrite the corresponding base-class-method to define the annotation model.

At the end, the model is attached to a Gateway service, the model is registered and is listed in the catalog service (/IWFND/CATALOGSERVICE), where it can be viewed in xml representation.

What is the benefit?

Annotations are helpful to add semantic information to metadata. For example, the metadata can declare that a property contains data as string. But with an annotation, we can declare that this data is always an eMail address.

So, annotations are used to enrich the metadata of an OData service.

They can be added directly in the corresponding xml element, like an attribute, but they can also be collected in a separate section of the metadata document.

They can even be located in a separate xml document, which then has to point to the OData service, which should be enriched.

Because of their structure, we refer to the set of annotations as an Annotation Model.

In our example, the annotation model declares UI elements and binds them to properties of the OData service.

Yes, the model belongs to an OData service, although it is defined outside of the service. The service doesn’t know about it. As such, any existing OData service can be enriched with detailed information about how it should be represented in the UI.

This is possible because the used annotations are based on a common public definition, which is stored in a so-called vocabulary.

An OData service itself focuses on the data

-> e.g. the existing products and their names

Annotations that are defined inside the service provide additional info

An (external) annotation model declares how to represent the data

-> e.g. products are shown in a table, but only name and description, and a selection field should allow to filter by name

In our example, the UI technology used to create applications based on annotations is UI5 with its feature called Smart-Templates

At the end, when the Smart-Template-application is started, the SAP UI5 runtime renders the UI controls based on the specified annotations. That guarantees a unified look at feel, because all applications that are based on those annotations will look similar.

In case that UI5 changes the rendering, then it will affect all those applications

In our example, the OData service is an SAP Gateway service, as it is built and running upon SAP Gateway technology

Below image shows the scenario and the techhologies and components covered in this tutorial: 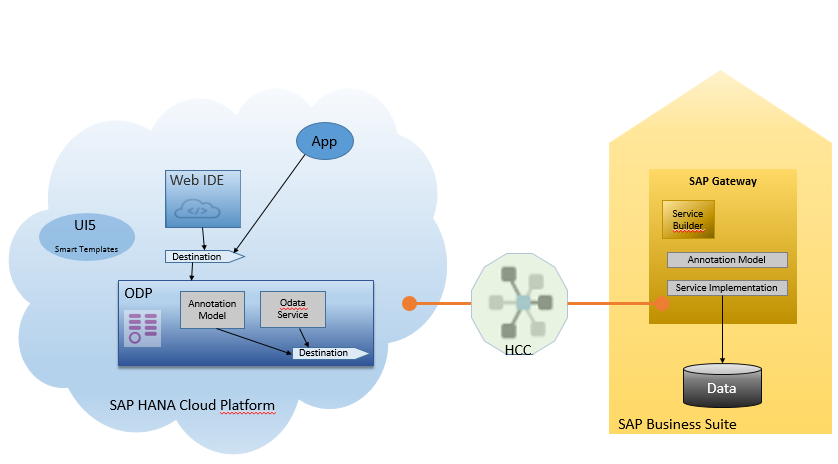 Even if you’ve never touched an SAP NetWeaver system, at the end of this tutorial you’ll have used the most prominent SAP Gateway development tools like a pro 😉

You don’t create an OData service, but you create an annotation model for an existing service.

And you learn a lot…!

How is it done?

In order to create an annotation model, the following steps have to be performed:

1. Create a Gateway Service or choose an existing one (this blog)

In order to follow this tutorial, you need the following prerequisites:

* Access to a SAP NetWeaver system where the OData service /IWBEP/GWSAMPLE_BASIC is available and up and running.

Note that you don’t need any ABAP development know-how to follow this tutorial.

You only need to be able to log into the NetWeaver system.

if you’re not familiar with ABAP, you need to be aware of being confronted with a kind of user interface that you aren’t used to…

If you’re not up in the cloud, don’t worry…

During the tutorial, I’m going to describe how to get access to the trial account of the SAP HANA Cloud Platform (HCP)

This section is dedicated to the OData service on which the Fiori application which we’re going to create, will be based on.

In our example, we don’t need to create a new Gateway service, since the so-called standalone annotations are anyways created in a separate project.

So we’re using the standard demo service GWSAMPLE_BASIC which is available as per default in SAP NetWeaver. Please refer to the Links section at the end of the tutorial for more info about the service.

Note that we aren’t modifying the service, we’re creating a separate, standalone annotation model that refers to it.

Let’s have a quick view on the service.

We invoke the Service to see if it is running and we invoke the SalesOrder collection on which our future application will be based.

* log-on to your SAP system

* Invoke the collection of sales orders:

Refer to the screenshot for details: 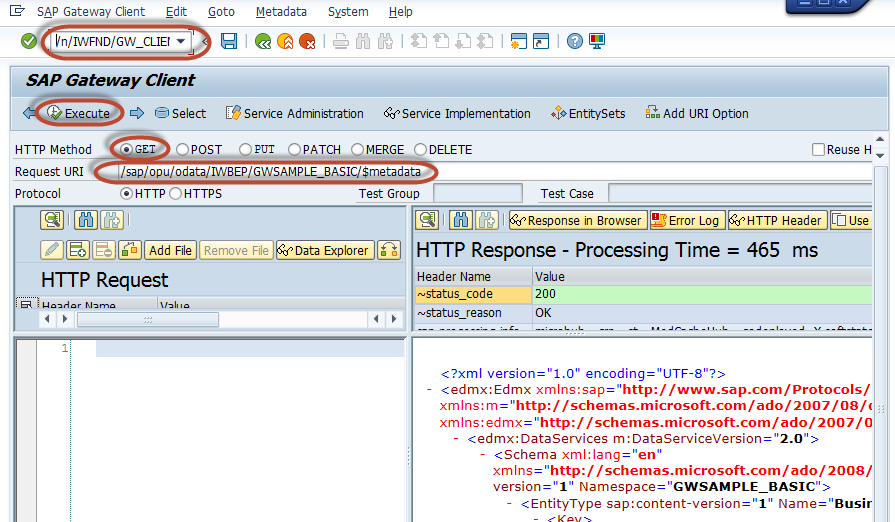 The call should be successful.

Thanks for the blog,

I had lot of doubts regarding the data extraction from the back end ABAP system when we are using SAP WEB IDE.

After going through all the parts its all clear now.

thanks very much for this comment - am very glad to hear that all this text was understandable and helpful!