Good News at TechCrunch Disrupt: Diversity Arrives! (Just in time for the bots to take over)

Hands up if you remember #Titstare!

Fast-forward three years and apparently TechCrunch and its Disrupt organizers have learned a few things about diversity.  Not only gender diversity, but racial and economic diversity were reflected in the speakers, topics, crowd of attendees, hackathon submissions and teams, in the (very impressive) startups featured on the Battlefields, and, key to this crowd, in funding (or lack of it) for diverse founders of tech initiatives.

Today during the first day of TechCrunch Disrupt and after the weekend of the hackathon, I sat next to the guy who ran this year’s hackathon and he said TechCrunch paid him twice as much to come back and run it after the #Titstare debacle. So they knew they had to do something. And it seems to be working, onstage if not on the streets.

Leslie Miley from Slack, who has actually been told he needed more white people on his team, hit so many good diversity points from the failure of tech’s “promise” to the mid-Market area in San Francisco to the importance of economic diversity against any other form of diversity. “There’s an increase in economic activity at the high end and it is left people at the low end out, serving a new demographic instead of the one that’s been living in those areas.”

“We in tech have an opportunity to do more than just move in and gentrify. We can raise everyone up,” Miley continued. “It’s not just ‘how do we give your schools computers.’ You have to raise the neighborhood up entirely.”

Morgan DeBaun of Blavity (a black media platform that reaches 30-40 million visitors a month) reminded us that less than 1% of all venture funding has gone to black founders in recent years. As a matter of fact, the first time DeBaun applied to be at TechCrunch she herself was declined (she’ll be launching her own black tech conference later this year, Afrotech). 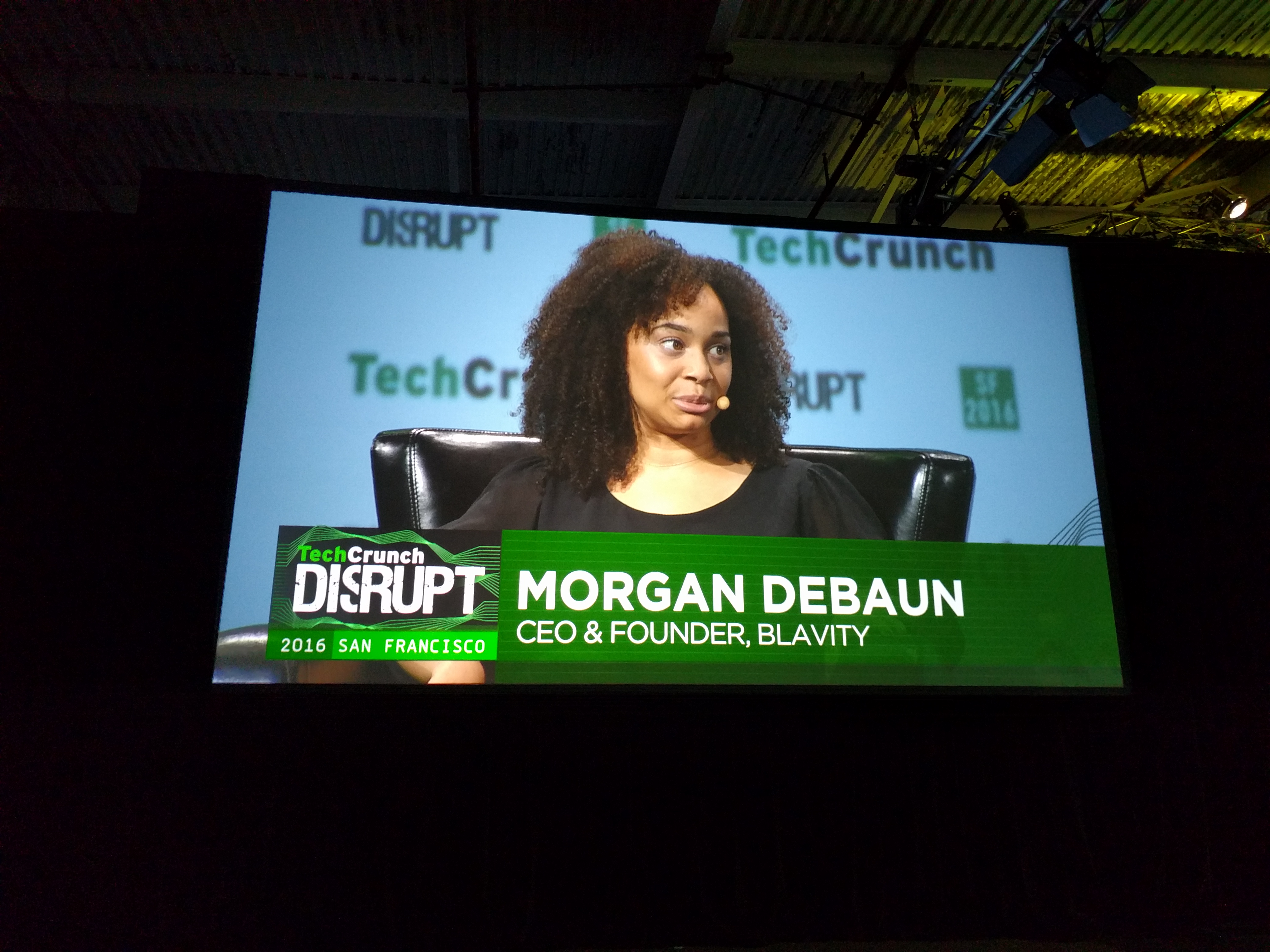 And this group of enterprising teenage girls used their time at the hackathon to gamify an approach to educating players about malaria.

Meanwhile, juxtaposed against that reassuring human backdrop was the image of a future filled with various bots – software that automates tasks probably while chatting amiably with you, essentially pretending to be human – at your ready. These bots will be happy to help assist you to engage with brands in a variety of ways, such as a travel bot engaging with you directly in a chat by booking your flight and then contacting your family once you’ve arrived – all via Facebook Messenger bots.

David Marcus of Facebook Messenger widely touted what the platform’s 34 thousand developers might end up doing with bots since the APIs were released in April, citing it as nothing less than the new brand engagement experience. “A brand can build an experience on Messenger to connect directly with customers,” said Marcus, without ever realizing they’re not using a brand app or web site. (see what Facebook did there?). “You’re booking airlines, taxis, and hotels in a fast and easy way close to having a native app.”

But it wasn’t just Facebook talking about bots. The Slack conversation turned to bots, with Leslie Miley dangling that “Slack will probably roll some things out in the near future with bots.” Jeff Lawson from Twilio pretended not to care about bots, dodging the question with insisting that content, not bots, were the killer app.

On one side of the spectrum, there was the inspirational Autism Solutions bot powered by Pepper, presented by six-year old Shriya Sreeju.

On the other, there were a number of bots designed to “be human for you, so you don’t have to be” – such as Fake Number bot (“it’s not you — it’s me”) – and the LoveBot, that will go to the trouble of “telling your wife you love her so you don’t have to.“ 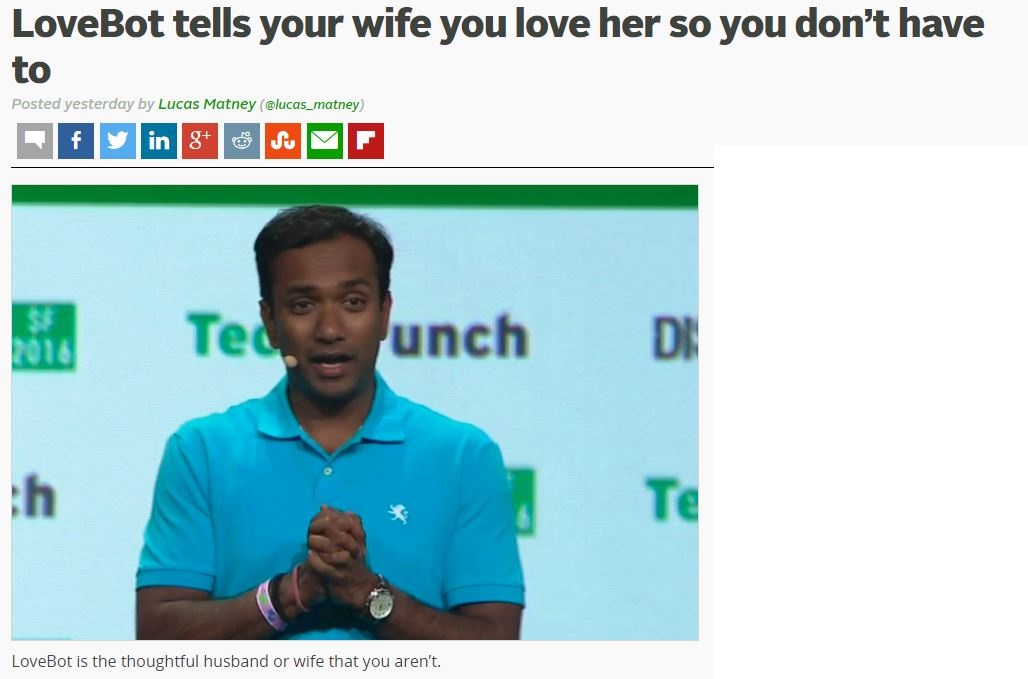 How do we parse this future in which diversity of humankind has finally been (re-)discovered among those who dictate much of our daily technology, yet that technology can be used to help us have to be less human ourselves? There will certainly be plenty of bots false starts if not more #Titstares, but perhaps as long as the crowd designing and building such bots is as diverse as we are, the bots we engineer will do a better job than we have at ultimately making sense of it all.

For now the good news is that the bots are coming, and they appear to be just as messy as the diverse humans that designed them.

And just as tired. 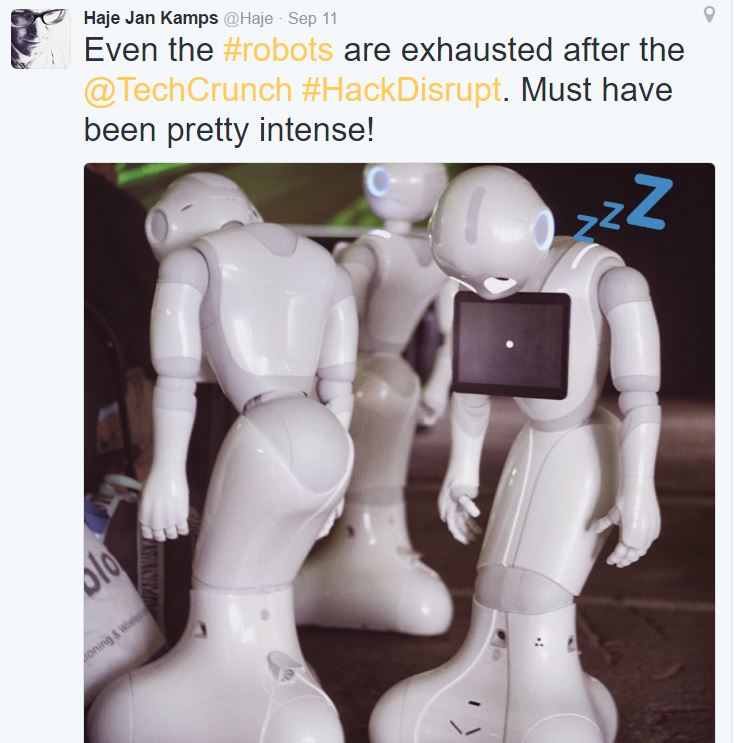