Attention, spoiler! I start my blog with the conclusion 😆 my participation in the Africa Code Week (ACW) was one of the greatest experiences of my life.  Preparation and work on site was amazing, it was just felt good to be part of local teachers’ and children’s life, when facing with mystery of coding and – more times than presumed – becoming interested in it.

So how to get prepared for code week? Before applying, I hesitated a couple of seconds about the programing part – it has been a while since I’d coded last time – more precisely almost 15 years  – but hey, if kids of age 8-10 can learn it, it cannot be so difficult…or?  Taking the online course, it turned out that pure coding is not too hard at all. The more difficult part is to figure out interesting tasks, catchy games, which you would like to show – but the online open program collection has helped me a lot. It is sometimes even more fun to figure back the coding –you see the complex game like pong, pac-man – and then realize how easy to code it, once you can properly define the goal. All the preparation took short time, even I managed to test some of them with my son – so far seemed I’m ready for Africa.

Travel and getting there: Starting from Budapest on a sleepy Tuesday morning, short stop in Amsterdam at 8AM. Meeting with some buddies from Business One team; Marc and  Gunner. Before boarding short enablement from Marc on the WhatsApp – ACW group – registration and then fully prepared to get all info on time. Heading to Cape Town I realized why it is better to travel from Europe, somehow Kathryn and Wesley hadn’t taken an active in the discussions – after being in air for more than 12 hours already. But overall the impression was that the whole team is excited to help and work, but still no clue when and how it will happen. During the way from the airport to the hotel we learned from our taxi driver that the other team members have already been arrived so we had an almost full team already.

Trainings and others: Our group of 12 people were formed to 4 smaller independent groups, each of them lead by a local trainer , Bafo, Okuhle, Calen and Luvo , they were helping us with their local experience. The trainings were planned so, that one of the trainers leads the class and the 3 other is mentoring the kids to help what to do.  The days started really early (especially for me who is a real ‘late bird’) – before going to the schools for 8:40, we also had to go to Science Center to collect all equipment: notebooks, mouses, cables, beamers pack the 4 vans, setup the training rooms before the kids arrive. This exercise is something which we really practiced several times a day, as each training was on different locations. I realized that an experienced team can manage  40 notebooks and beamers up and running in 15 min –starting from the van door opening 😆 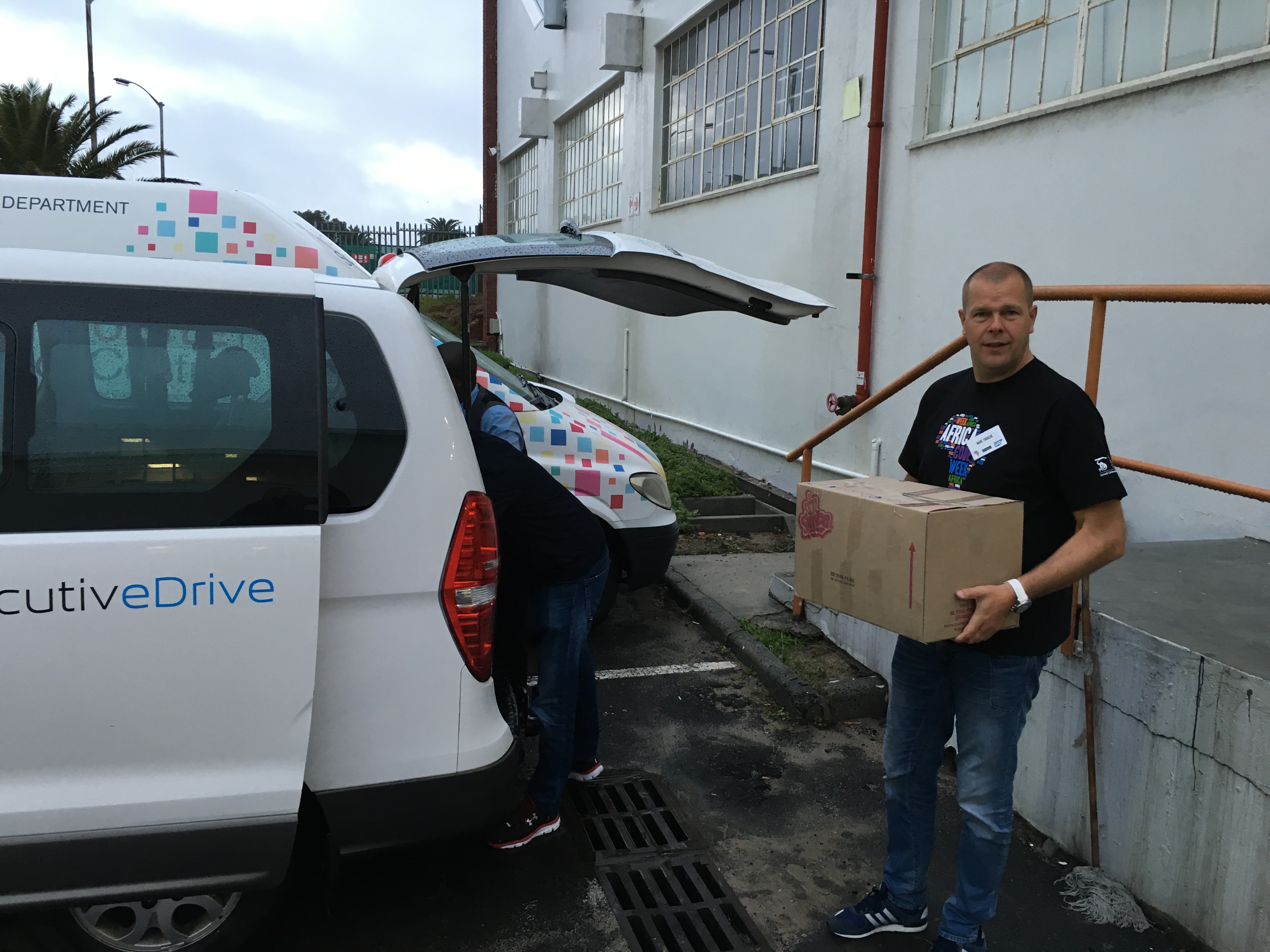 And before the first lesson I felt that all of us is getting more excited about how the training is going to be run. But, in the very moment when the kids entered the classroom, it became clear that know coding is one part –the other is the teaching part – how you can make a lesson interesting enough for kids in 8-10 age. This was the point where our local mentors helped a lot. The first lessons had been guided by them, so we could get up some tricks, what makes the attention up all time. All of them were really interested to learn and Scratch is an amazing software really designed for kids. You could see how the kids getting shocked in a good sense, when after the first successful steps, their characters on the screen (we call them sprite in fact  ) were getting alive and following their instructions. The lessons were designed for 1,5 hours – normally the first 10 minutes’ in quiet attention, then starting to work – really focus first steps and than in the last 30 min –with already some know-how the kids were taking separate track.  Each of them found something really interesting part. With the help of group trainers (each of us taking care of 5-10 children) – you could pay enough attention to all of them.

After the first class, we had changed the lead trainer – Mario was the bravest to start, so we could see how a professional sales is selling a software demo to a very different target audience. The lesson went really well, it was good to see that the system is so cool that we will be able to carry out interesting lessons. Same size of the group, and additionally a bit different learnings from the teacher; you should never show to a group of 40 kids how they can make noise with a computer 😆

After a short lunch in the school garden we packed the van and moved to the afternoon school. Bit different district, not so well equipped school, but the children were somehow even more interested in learning with computers. Some of them really had only basic skills, but their motivation and keen to learn something new were really on the top. And this was the first lesson which I managed as lead –really requires concentration how a group of 50 kids is following instructions. It was great to have B1 team there in the room, they helped everyone to follow up – and enjoy coding. The result –as usual- smiles and a couple of moving and talking cats and other figures on the screen.  On the way back to the hotel, the group were really inspired from the first day experience, and we also collected some feedbacks from the others –how the lesson can be improved. At the end of the day we had a long late night dinner in the town –and sharing experiences with the other groups, and also involved in a bit of the Cape Town night.

Friday morning we had already started much easier, clearly aware of what to do – clearly see even one day routine helps a lot . Maybe not in the waking up part –the early start was  the same like the day before, the team arrived slowly to the hotel reception. Then headed to the Science Center – packing up the vans and moving out to schools. Experience and results are the same, was really interesting to see how differently the group members are delivering the lesson, and you could always see the point when the kids moved from a ’must participate lesson‘ mode to ‘I have a lot of questions’ and ‘need more time to play with it’ mode. 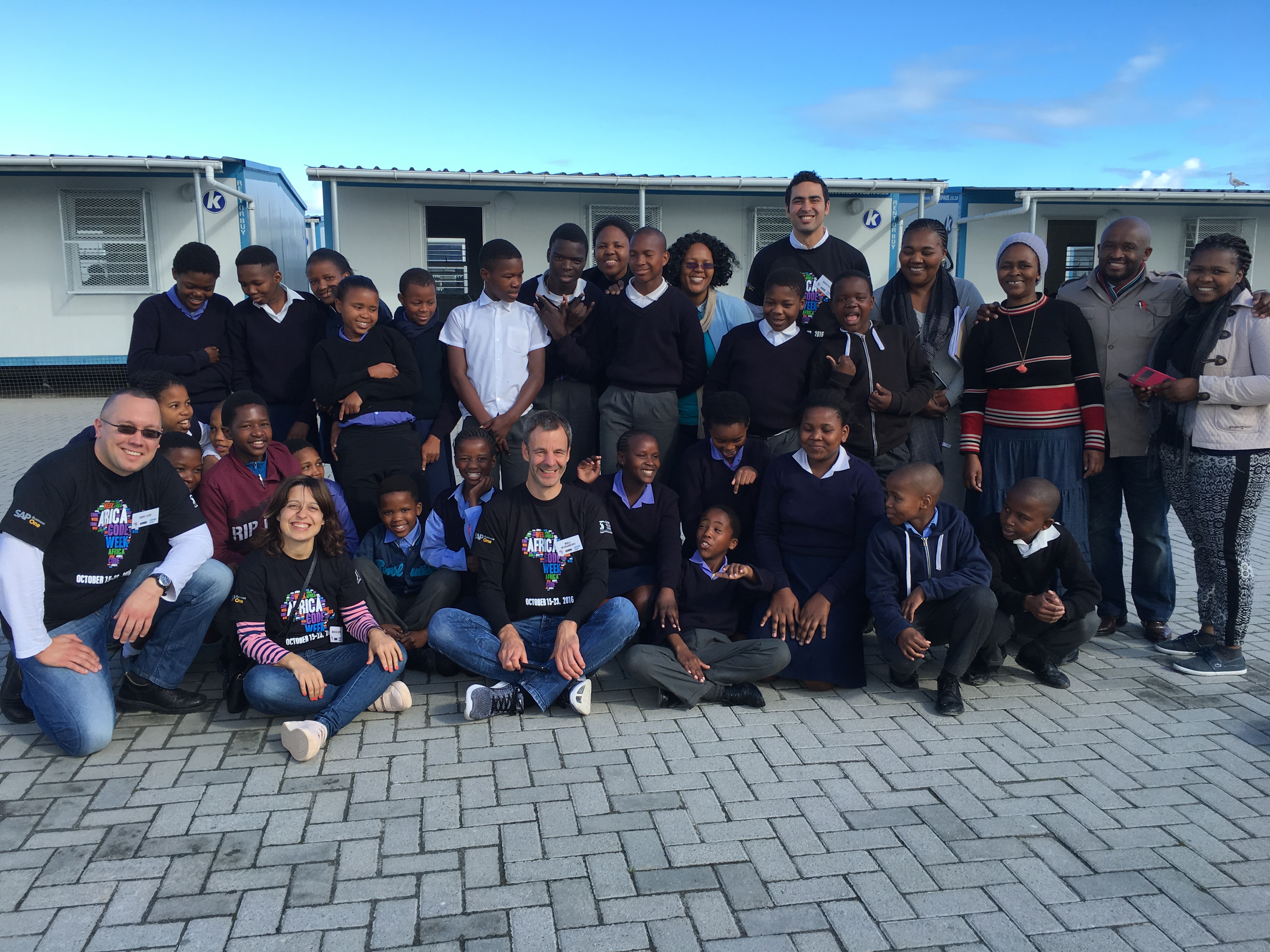 The afternoon we moved back to the Science Center and started to deliver the train the trainers lessons to teachers. It was interesting to see, in a way how different they were as students – more discipline –but also some of them even more worried about the computer and how to manage it. And surprisingly the result was the same, after the first steps in coding world we received the same emotions, interest and fun from their side. Maybe a difference that they had more questions about what and how to do later on, was good to see how they started to think about to pass this knowledge to their students in their schools. One bonus to the end of the day – as next day’s  training was be also in the Science Center –no need to pack laptops, and we start only at 8:30 in the hotel.

Saturday the last training day, we were all day in Science Center, the most amazing were to meet the group of teachers from Friday morning –they decided to be part of the train the trainer education, as they really enjoyed the lesson with the kids and decided that they have to learn Scratch.

I led the last session in the afternoon, the class was very nice and the teachers left the room discussion coding and with smiles on their faces.  Lot of them came to our group and said ‘thank you’ for us for the time spent and the knowledge shared –this was really very personal feeling part of this happening. And we also said a big thank you to all the participants, because we had learnt as much as from them then they had learned from us. All of the b1 group who was there had the great wish in some form of continue and follow up later on what we started during the days.

After some time arriving back to Budapest, I can only say, that being part of the Code Week in cape Town, was really one of the greatest opportunities SAP has given me, and I am very happy to continue this job as virtual Scratch Master instructor, in November, as the project being rolled out in Africa. 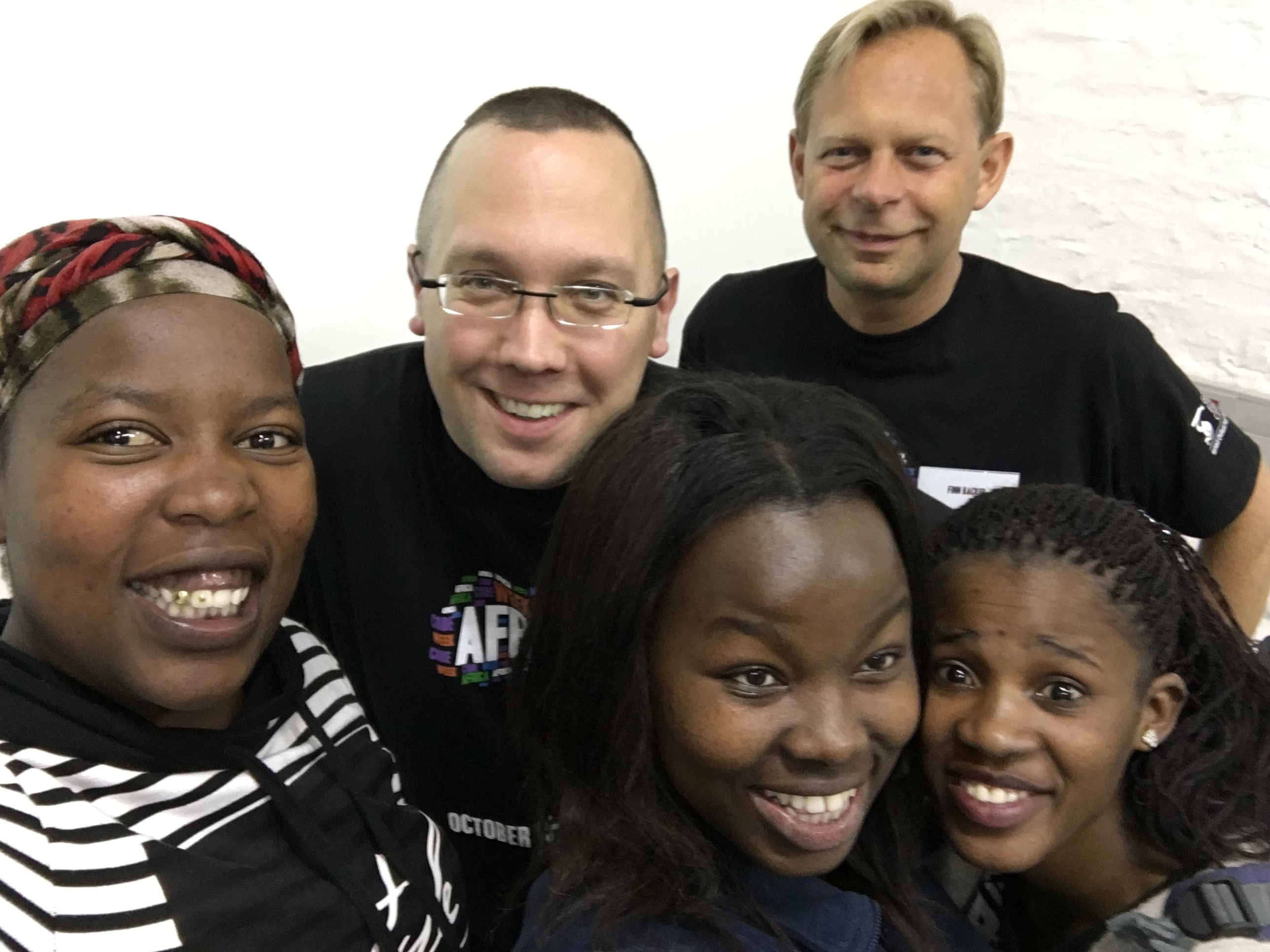