One of the most frequently asked questions is how you can get from your current data warehouse landscape to SAP BW/4HANA. At SAP, we realize each of our customers are starting their journey to a modern data warehouse from various places. That’s why we have created distinct paths, complete with distinct services and tools, to help you achieve your goals in the most direct fashion, with the least disruption.

But first, let’s look at the different implementation paths. In part two of this blog, we will take your starting point into consideration and show which is the recommended path or a viable alternative. For now, keep in mind that all three paths are applicable for mostly any existing landscape. 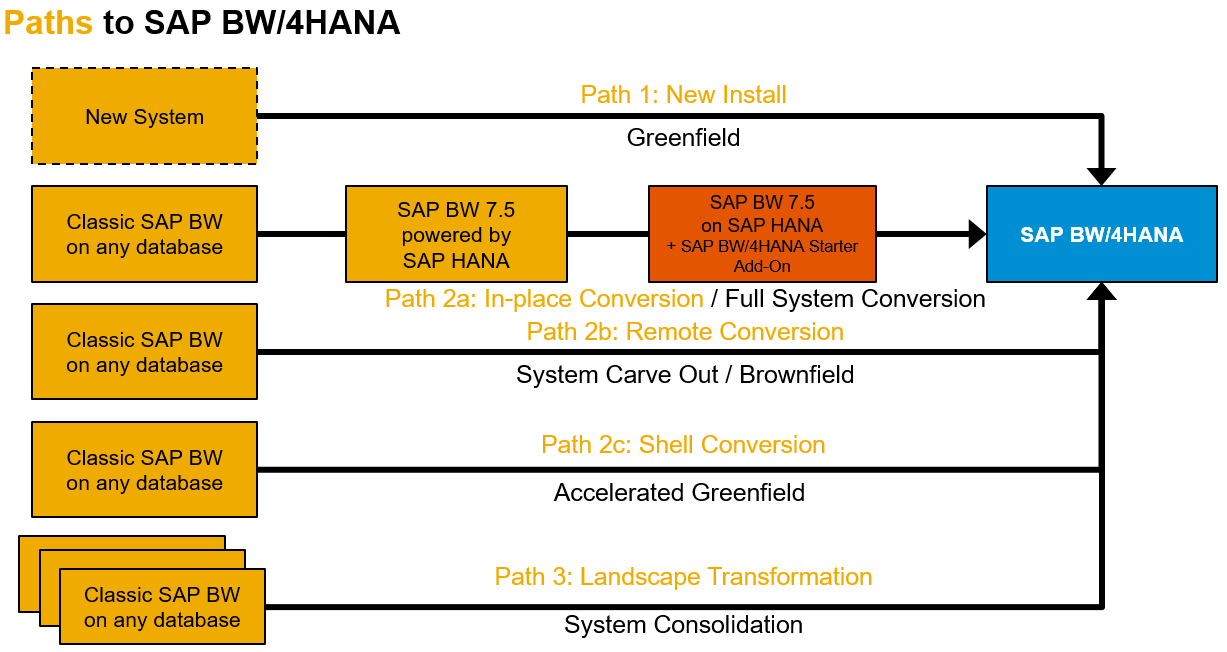 Now there are two basic options for configuring your new SAP BW/4HANA system. Either you begin from scratch, connect any data sources – that could be a legacy data warehouse or any other data source available in your enterprise – and start modeling your data warehouse. We highly recommend following our layer scalable architecture framework (LSA++). Within minutes you can create your first queries and show data in a dashboard. Yes, it’s that simple now thanks to so called “HANA source systems”, field-based modeling, and a modern user experience for designers in Eclipse.

If you run already a SAP Business Warehouse (BW) system today and want a fresh start, you can get a head start by transporting certain configuration and data models from your existing landscape to SAP BW/4HANA. Please note that this is only supported for the initial system setup, not for continuously updating the new landscape. And, of course, it’s only supported for objects that are fully compatible with SAP BW/4HANA. If you are, for example, running already SAP BW powered by SAP HANA 7.4 and have used Advanced DataStore Objects and CompositeProviders, you could transport these to your new SAP BW/4HANA system.

Since March 2018, we offer another alternative, the so-called Shell Conversion for an accelerated greenfield approach. More on that later.

Following very much the strategy for data warehousing and recommendations we laid out for SAP BW customers in the past years, your intermediate target is to get to SAP BW powered by SAP HANA and transition to data models that are fully optimized for SAP HANA. That means, for example, no more InfoCubes and MultiProviders but using Advanced DataStore Objects for persistency and CompositeProviders for modeling joins and unions of your persisted or even remote data.

Side note: The time of logical data warehousing is here and thanks for SAP HANA smart data integration it’s easier than ever to integrate many data sources without having the load the data. This approach can get you started quickly but does not overcome limitations in terms of performance of the source system, network capacity, or latency connecting to the source. If your source is however on SAP HANA and in the same data center (or just in another tenant in the same SAP HANA database that SAP BW/4HANA is running on), then please give it a go. Create an Open ODS View on top of the source data and use it in your data warehouse models. For maximum performance, you can always generate a Data Flow and Advanced DataStore Object to persistent the data in SAP BW/4HANA. Piece of cake!

As stated at the beginning, we want to make the transition as seamless as possible. For that reason, SAP is providing three distinct paths from SAP BW to SAP BW/4HANA: In-place, Remote, and Shell Conversion. The in-place conversion takes your existing SAP BW landscape through a transition process that transfers step-by-step data models and flows to objects compatible with SAP BW/4HANA. Prerequisite is SAP BW 7.5 powered by SAP HANA, the last major release of SAP BW.

Don’t worry if your system isn’t there yet. We have options. First, you could migration to SAP HANA and do a release upgrade to SAP BW 7.5 as a precursor to the in-place conversion project. These can be combined – as we have done for several years now – using the Database Migration Option (DMO) of SAP Software Update Manager.

Alternatively, you could go for a Remote Conversion instead. We refer to it as well as brownfield approach. You can use any SAP BW system with release 7.3 to 7.5 on any supported database platform as a starting point. The caveat is that you will need additional hardware for a new SAP BW/4HANA system that will be the target of the Remote Conversion. One the other hand, this provides some benefits like minimal impact to the existing SAP BW landscape, the ability to test old and new systems in parallel, and the option to carve out the models and flows you deem relevant for your new SAP BW/4HANA data warehouse. Remote Conversion includes the transfer of existing master and transaction data.

If you want a fresh start i.e. preferring a greenfield approach, a Shell Conversion might be what best for you. It is available for release 7.0 to 7.5 and works like a Remote Conversion using a parallel SAP BW/4HANA landscape. Shell Conversion does not include the transfer and synchronization of existing data sets. Instead at your convenience, you can choose to load data from original sources, load data from original SAP BW system, or simply ignore historical data and start fresh. How about we call it “accelerated greenfield”?

To support the transition in all three paths, we developed the SAP BW/4HANA Transfer Cockpit. The cockpit is generally available for customers and partners who want to perform an In-Place or Shell Conversion and can be installed on any SAP BW system with releases between 7.0 and 7.5. The SAP BW/4HANA Transfer Cockpit is the single point of entry for tools required for transitioning SAP BW systems to SAP BW/4HANA. It collects and displays of essential statistics of transfer processes and groups tools according to preparation and realization phases of your project.

The Remote Conversion (and related SAP BW/4HANA conversion cockpit) is still in Early Adopter Care. General availability is planned for end of Q1/2019.

During the preparation time, you will use the Pre-Check Tool to analyze the meta data repository of your SAP BW system and lay out a to-do list for the transition process, run the Sizing Report to determine the required size of hardware for SAP BW/4HANA, and use the Code Scan Tool to analyze your custom developments – including code embedded in various SAP BW objects like transformations – for compatibility with SAP BW/4HANA.

When you get to the realization phase, you will spend most time using the Scope Transfer Tool, which allows you to create SAP HANA-optimized objects for all your classic SAP BW data models and flows. Pick a data target, like a MultiProvider and the tool will determine all dependent object like InfoCubes, classic DataStore Objects, transformations, and DTPs and allow you to quickly create equivalent CompositeProviders and Advanced DataStore Objects including matching transformations and DTPs. During an In-place Conversion, the transfer happens inside your SAP BW on SAP HANA system. For Remote as well as Shell Conversions the new objects are created in the target SAP BW/4HANA system. From InfoCube to Advanced DSO, from MultiProvider to CompositeProvider. Like magic!

For In-place Conversion, several sprints using the Scope Transfer Tool will lead to a system that runs only data model and flows that are compatible with SAP BW/4HANA… but still in SAP BW (along the way you use another cool tool to adjust user roles and authorizations, which will be much appreciated by your security team). The ultimate step is therefore a technical system conversion that removes the old SAP BW code and replaces it with SAP BW/4HANA. This is when you finally get to use the goodies like Data Tiering Optimization and the SAP BW/4HANA Web Administration Cockpit.

Remote and Shell Conversion already use SAP BW/4HANA as a target. Your sprints will have to cover only models and flows you want to keep. The transfer and synchronization of data in the Remote Conversion is done using the SAP BW/4HANA Conversion Cockpit shipped as part of SAP Landscape Transformation. But there’s no need to wait until the conversion is completed. As soon as one scope transfer is done, you will benefit from the new functionality of SAP BW/4HANA.

The third and final option is to optimize more complex data warehousing landscapes resulting in a single, global SAP BW/4HANA system. One reason could be that you are running multiple legacy or SAP BW systems, which you want to consolidate on the mighty SAP HANA platform. Typically, a combination of one In-place Conversion and one or more Remote Conversions will be used. Another could be to carve out selected data models or flows into an existing SAP BW/4HANA system. In any case, the Data Management & Landscape Transformation team at SAP can help with a customer-specific migration project built around well-defined methodology and re-using standard tools.

One of the innovative tools is the “System Comparison Workbench” which can show you, for example, differences between several regional SAP BW systems and help define a strategy to integrating these into a global data model.

For a presentation style version of this blog (“The Road to SAP BW/4HANA”) and many more details on SAP BW/4HANA, please visit the SAP Community Network and check out the FAQ document.

A complete end-to-end documentation of the transition process from SAP BW to SAP BW/4HANA is already available in the SAP BW/4HANA Conversion Guide.