Highlighted in previous blogs http://scn.sap.com/community/s4hana/blog/2015/11/05/hana-journey-and-features-of-scm-products-in-s4-hana-simple-logistics and http://scn.sap.com/community/s4hana/blog/2015/11/19/sap-s-road-map-for-supply-chain-solution-with-s4-hana-and-its-expected-benefits on the advantages and SCM applications being natively integrated in digital core of S/4 HANA (S4H). This blog is very specific to EWM integration with S4H.

It appears from below SAP slide (though stated as Labs preview) that EWM will be embedded in digital core of S4H in On-premise edition of 1610 release i.e functionalities of EWM will be made available in digital core and there is no need for running EWM as a separate application. 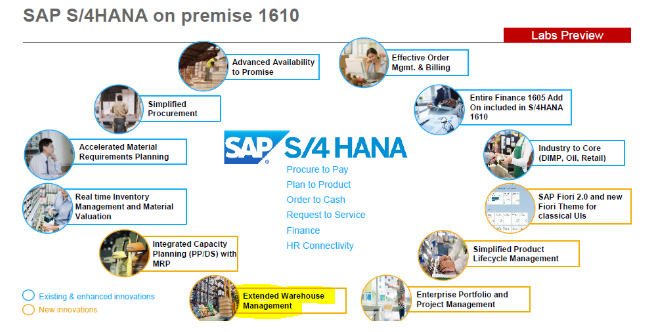 Now , the question is whether this native integration of EWM with S4H will be relevant / beneficial for all customers or scenarios ? Answer is NOT as

One of the main USP of SAP EWM is its capability to operate in decentralized mode i.e both ERP (ECC or S4H) and EWM can run independent of each other i.e all Goods receipt (GR) , Goods issue (GI) and other warehouse activities like VAS etc can be performed in EWM even if the connection with ERP (ECC) is broken. All these transactions / documents get transferred / updated to ECC once the connection is restored.

So, the stand alone deployment of EWM will continue for

Hence, if the warehouse operations are de-centralized, then it needs to be ascertained  whether the option of native integration of EWM with S4H core should be chosen or not.

While this blog post clearly states that EWM will no longer be required, The most updated simplification document of 1610 (p. 222) states:
"2.1.18.1.3 Required and Recommended Action(s) The Warehouse Management (LE-WM) and the other components described above is not the target architecture within SAP S/4HANA. The (already available) alternative functionality is Extended Warehouse Management (SAP EWM) and a customer could start introducing EWM upfront to the SAP S/4HANA installation. "

This blog explains that EWM can be a part of S4H Core (as in 1610) or can be deployed as a de-centralized option.

We are an e-commerce seller and have an existing SAP landscape with SAP ECC and embedded WM. For our new warehouse we have planned to implement SAP EWM and we are thinking of what system setup would be the best for us.

Question: is there a possibility to implement SAP EWM within S4HANA as a decentralized system, connected to SAP ECC and what are the advantages/disadvantages of this solution?

Hei Mrinal K.Roy. I think you have added the wrong Picture for figure 93 in the SAP Press E-Bites INtroduction EWM whit SAP S/Hana.

Many thanks for informing about the wrong image for figure 93 in EWM Ebite. I am sorry for the incorrect image. Please inform your mail ID at my below email so that I can send you the correct image. This forum is not the appropriate place to inform you the right image

[Private information needs to be part of Profile and not posted in public parts of the SAP Community, or send it as a chat message in messages.sap.com]

I think Mrinal - just like to share the overview of LOB available in S/4 HANA EM. it is my understanding..

Please note the answer for your questions as below

1st : Most of the transactions of decentarlized EWM can be carried out in embedded EWM. There are few limitations in embedded EWM e.g not all types of inspection are not yet supported in embedded EWM of S/4HANA 1610 release. Refer note 2347770 for more details.

Hope , I am able to clarify your questions.

embedded EWM functionalities in S4HANA are included in the same license for S4HANA or additional licences need to be considered by those customers who want to run EWM in the same instance?

Embedded EWM in S/4HANA is available in two versions:

Does it means that option 1 is included in S4 license while option 2 requires additional license?

thanks for clarification provided,
regards

Can someone throw light on these questions please,

i. What are the implications on maintaining master data in embedded setup in 1610 and

ii. how can MDM tool help in maintaining master data for warehouse product

I brought your book 'Introducing Extended Warehouse Management with SAP® S/4HANA' and followed it to setup Embedded EWM. It is very informative. I think I did all required configuration and created an inbound delivery using VL31n. In SMQ2 I am getting the error "Function module "" not found". Can you please throw some light on this? What am I missing?

Suggest to cross-check the RFC connection (SM59) and distribution model.

Thanks Mrinal. RFC connection was missing. I created it. I checked the distribution model and it looks ok.  But issue still exists.

In pg 110 of the document, figure 93 is supposed to be for 'Configure SAP EWM Specific Parameters'. But the figure is representing 'Define Queue for Transfer to SAP EWM'. I attached the screenshot of that setting. Could you please review to see if it is correct?

I have also attached the distribution model. Could you please check it and let me know if that is correct?

You are right, figure 93 is incorrect.  Unfortunately, it got changed at editing. Sorry for that .

However, the settings that you have done for that path is correct.

Suggest to check the settings for distribution model at below path

Flag the checkbox ' Check entries' . If settings are correct , below message will appear for your WH

"Data correct for whse no E01"

Check entries says the Data is correct for the warehouse. The missing piece was BD97. I did that and now I can see the FM. Now I am getting below error in SMQ2. Could you suggest any on this? Regarding Business Systems, do we have to maintained individual Business system for ERP and EWM, as they are in the same system now?

Yes, Business system needs to be set up as stated in page 110 also for embedded EWM of 1610 release. Probably, SAP is working to make these embedded interface seamless in later releases.

Can you please add detailed information of EWM on S4HANA. it is more useful for MM/WM/EWM background persons. Thanking you.

your blogs are more impressive and topic chosen is more catchy,