Using what is defined in LR :

When performing load testing, one needs to emulate heavy user load on your system. To accomplish this, one can synchronize Vusers to perform a task

at exactly the same moment. One can configure multiple Vusers to act simultaneously by creating a rendezvous point. When a Vuser arrives at the

rendezvous point, it waits until all Vusers participating in the rendezvous arrive. When the designated number of Vusers arrive, the Vusers are released.

One can designate the meeting place by inserting a rendezvous point into the Vuser script. When a Vuser executes a script and encounters the rendezvous

point, script execution is paused and the Vuser waits for permission from the Controller to continue. After the Vuser is released from the rendezvous, it performs the next task in the script.

How to Insert Rendezvous Points

One can insert rendezvous points in one of the following ways:

When a rendezvous point is inserted, VuGen inserts a lr_rendezvous function into the Vuser script.

Important information   : Available only if one of the Vuser scripts participating in the scenario contains a rendezvous point.

The timeout determines the maximum time (in seconds) that LoadRunner waits for each Vuser to arrive at a rendezvous. After each Vuser arrives at the rendezvous, LoadRunner waits up to timeout seconds for the next Vuser to arrive. If the next Vuser does not arrive within the timeout period, then the Controller releases all the Vusers from the Rendezvous.  Each time a new Vuser arrives, the timer is reset to zero

Default value: 30 seconds. One can set a custom timeout for each rendezvous point

To set a timeout one can follow these steps:

4 In the Timeout box, enter a timeout value, and then click OK. The timeout is set for the rendezvous.

Some screenshot of a working rendezvous shown below : 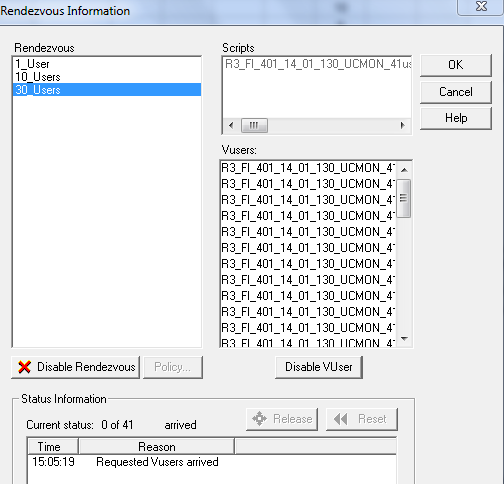 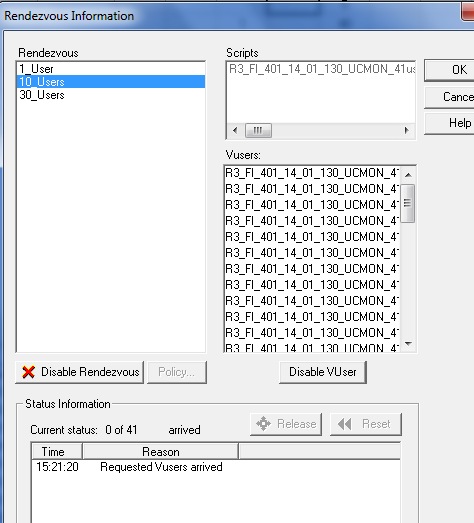 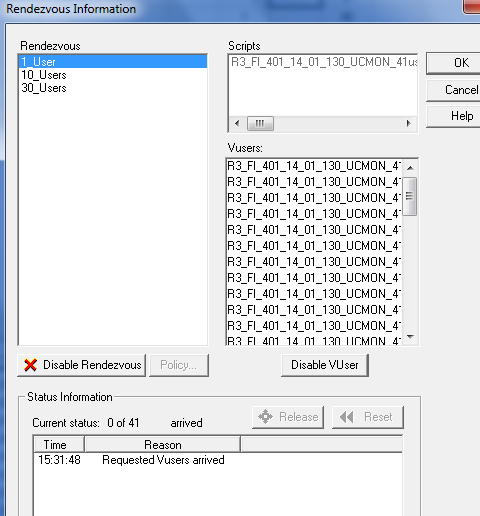 Note: Rendezvous points are only effective in Action sections— NOT init or end

Note: In goal-oriented scenarios, a script’s rendezvous points are disabled

For running specific Action(s) please refer to this blog,