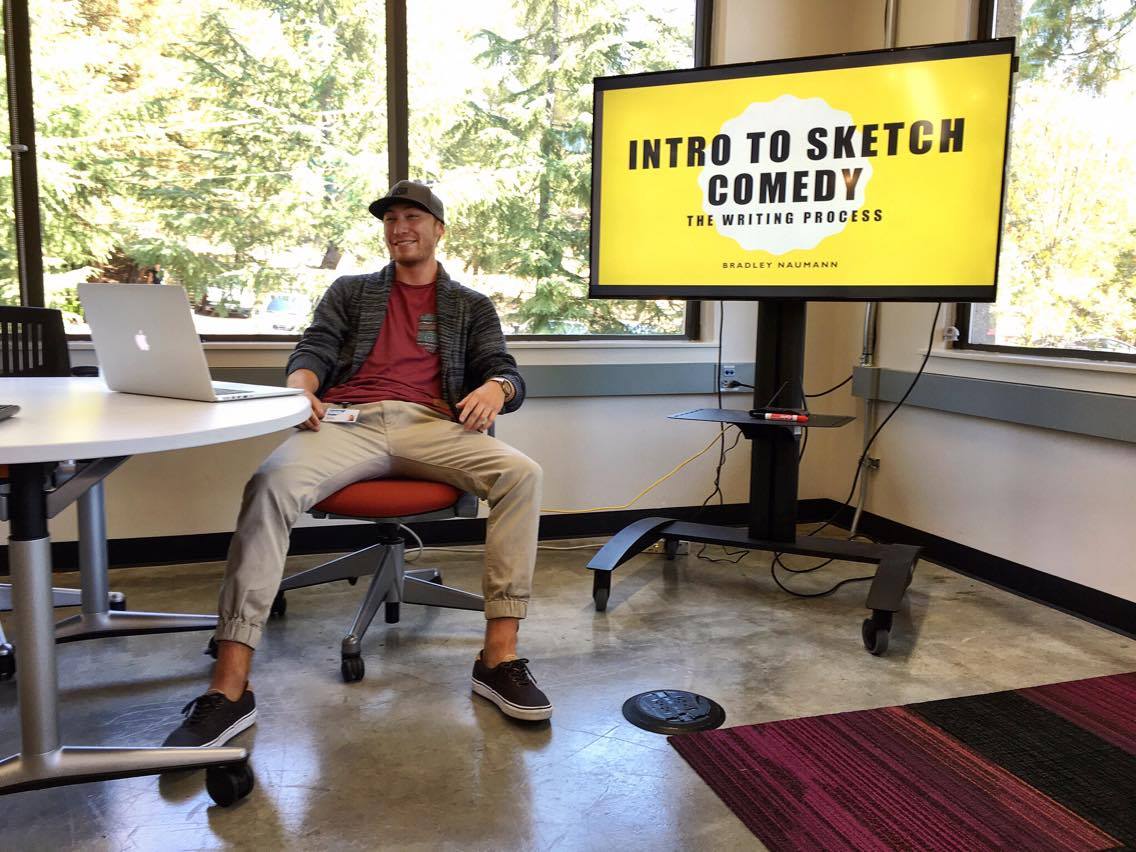 Design thinking is not just a big joke…or is it? I wondered about this recently when I attended a sketch comedy writing workshop led by our very own talented intern Bradley Naumann. At the Design & Co-Innovation Center (DCC), we encourage team members to share their talents with the rest of us, and I am so glad Brad did. Listening to his presentation, I was struck by the similarities between the sketch comedy writing process that Brad described and the one we follow with our customers when we co-innovate with them.

For context, sketch comedy is a form of entertainment that consists of a string of short comedy skits that last from one to ten minutes.  A group of comedians or actors perform these sketches through a variety of channels, such as a live stage performance or through a recorded visual medium like a YouTube video, or a television show.  The writing process for creating these sketches is characterized by an open atmosphere where both constant ideation and team collaboration can thrive.

Design thinking is a structured process of innovation, primarily used by businesses. When done right, the result is products and services that delight users and drive innovation.

While on the surface sketch comedy and design thinking may not have much in common, I noticed some interesting similarities:

Empathy: Both start with understanding and observation. Design thinking builds empathy for your target audience and their everyday pain points to create the most relatable and innovative ideas.  Similarly, in the sketch comedy realm, having a deep understanding and empathy for a specific target audience serves as the foundation for the success of jokes.  By recognizing and then leveraging the everyday routines, tendencies, and interests of potential audience members, a writer is able to steer humor in a direction that appeals to his/her spectators.

Collaboration: For the best results, design thinking encourages intense collaboration between diverse teams. The success and overall quality of sketch comedy also rests upon the unhesitating will of a team to work together and create original content.  Whether it’s collaborating as a group during the sketch ideation phase or working together to write jokes and dialogue for a specific sketch, collaboration is a central component to all stages of sketch comedy writing. This teamwork and openness invites ideas from every corner of every brain in the room.

Brainstorming: The six rules of brainstorming followed by design thinking practitioners are:

While there are no set rules for brainstorming sketches, comedians and writers alike instinctively (and probably unknowingly) follow these same rules when generating ideas. For instance, wild ideas can be extremely successful ideas in sketch comedy.  Even if an idea seems to be directionless, sketch comedians never discount it, choosing instead to defer all judgement and building or iterating on it. Likewise, sketch comedy is a visual medium of comedic performance, so being visual when articulating an idea is particularly important – if the rest of your group cannot visualize a concept or the potential of a concept, then the idea is one that might be overlooked and should be reshaped.

Prototyping and testing: For the best results in design thinking, it is important to make your ideas tangible, validate them, and iterate based on your findings.  Similarly, in sketch comedy, sketches are written (tangibility), read in front of a group or small audience (validated), and then changed or rewritten based on the performance of the jokes or reactions from the crowd (iterated). This prototyping process ensures a final “product” or sketch that is clean, appealing, and the very best version of itself.

So, what do you think? Do you agree with me that there are similarities in these seemingly completely different practices? Share your thoughts on Facebook (@AppHausPaloAlto) and twitter (@SAPAppHaus).

Check out a video of Brad’s sketch comedy troupe:

And here is a peek into a design thinking process in action: