The Case for Edge Processing in IoT

(In which I make the general audience case)

Where would U2’s Bono be without The Edge?  Similarly where would the Internet of Things (IoT) be without Edge Processing? 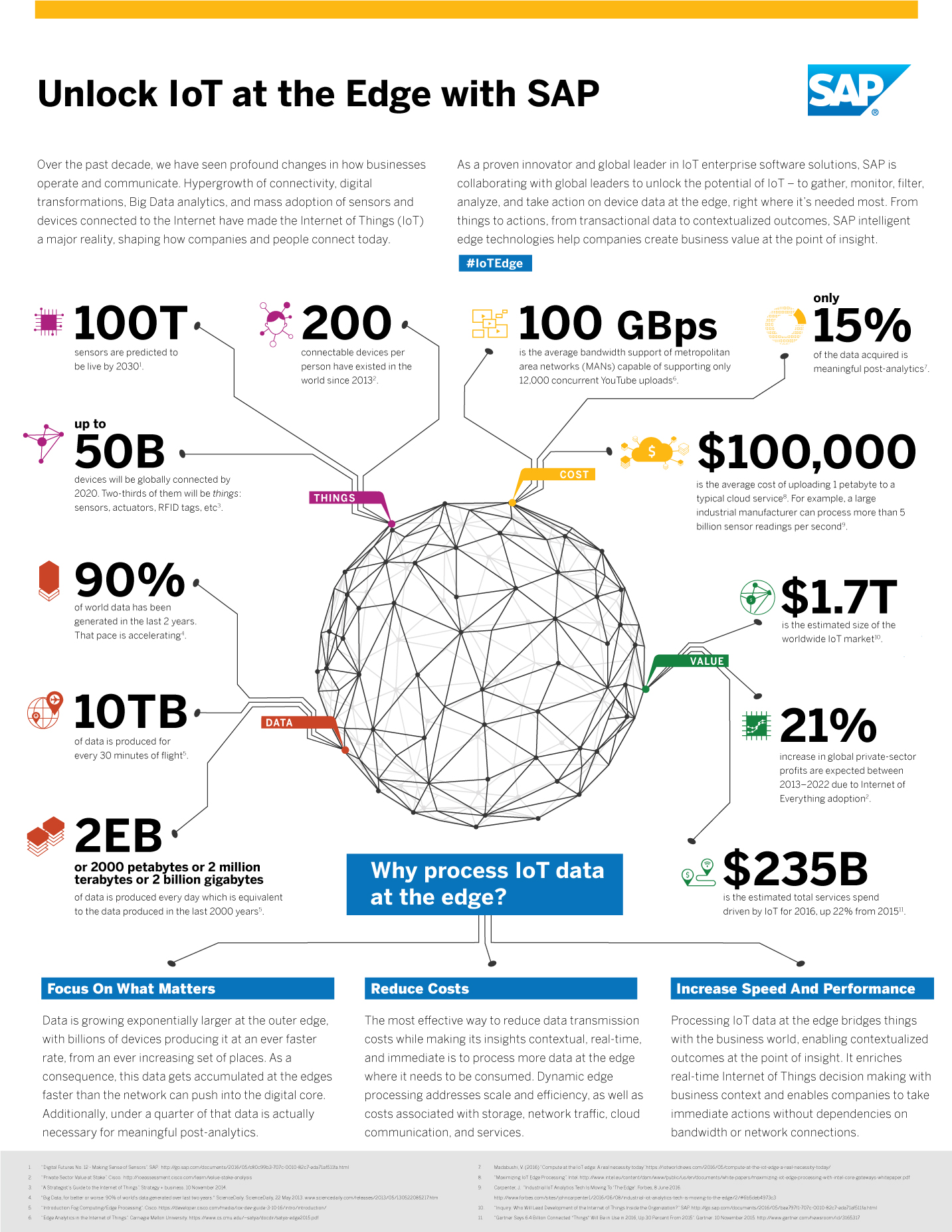 The Edge quite simply refers to locations outside of the data center, at the edge of the network. And as we know the Edge is getting smarter with Things, Things that are collecting data from places we never imagined yesterday.  In fact experts estimate there will be over 100 trillion Things collecting data by 2030. So can you imagine the amounts of data these Things will create?  Answer: A lot. Considering about 2 billion gigabytes of data are produced every day today.  Perhaps more shocking is that studies show only 15% of that data is actually useful.

Do you really want to send 85%-useless data to a digital core for processing?  Maybe in a world of free resources.

Let’s not also forget that the data collected by those Things tells only half of the IoT story – what we refer to as the operations side, the data that gets collected during the course of operations (referred to as Operational Technology (OT) data). For example, OT data can include temperature readings or inventory sensor on/off states. But what’s missing from OT data is the bigger picture.  How does this information relate to the business?  In short, it’s also missing the Information Technology (IT) data stored in large enterprise software systems which are required to pull meaningful insights from IoT data.  For example, IT data can include maintenance requests on cooling equipment or master data regarding inventory.

The answer to this problem is Edge Processing, the secure bridge between physical Things and the business world. Edge Processing happens at the Edge, simplifying common IoT processing patterns (for example, triggering real-time worker safety alerts based upon processing data from multiple sensors worn by a worker) and extending the digital core for immediate action (for example, issuing incident report transactions based on those alerts).  Because Edge Processing is done locally, it becomes the clear choice for use cases such as crane collision detection or automated driving cars, which require real-time analysis and response. Edge Processing also strengthens data integrity by only sending back the 15% of data the digital core really needs for analytical analysis.

More and more organizations are planning to collect and process data generated by IoT sensors at the Edge rather than at a data center because of these advantages.  So what is your Edge strategy?

For those interested in the Edge (not the guitarist), please check out the attached IoT at the Edge infographic with references to all the stats outlined in this blog article, plus more!  Feel free to share with #IoTEdge

>> Sarah McMullin is a Director for Emerging Technologies at SAP Waterloo.  Working for a big company does not stop her from running simple like a startup.  Successful creator of junior honey badgers and applications that create new markets.  Fascinated by biogenomics and food fraud.  Follow me on twitter @Sarah_Sugoi

Hi Sarah -  This is interesting to think about. I think it depends on the product capability , need and the level of analytic views that can be made available @ edge for certain type of users.

What is your view on this.