During the last years, I was a lot working with static analysis for ABAP. However, since SAP is introducing many new programming technologies, more and more SAP users are confronted with new languages besides ABAP. One of these is SAP HANA SQLScript, which is used to develop high-performance stored procedures for the SAP HANA in-memory database. Unfortunately, SAP did not provide any static code analysis for SQLScript (in contrast to SAP Code Inspector for ABAP). Moreover, there are no precise guidelines how to develop good SQLScript code so far. In this post I’ll present our initial thoughts on assessing the code quality of SQLScript.

The starting point to identify relevant static checks was the SAP HANA SQLScript Reference, which already mentions some (very general) best practices (chapter 13). Some of the recommendations there are very easy to detect automatically, e.g.

Creating static checks for these two was fairly easy, basically this is just a search for the respective statement (e.g. DECLARE CURSOR, EXEC or EXECUTE IMMEDIATE).

The first rule in the SAP best practices is more interesting: Reduce complexity of SQL statements. Here, the recommendation is to extract sub-queries from complex queries and assign these to table variables. Sub-queries are SELECTs which occur within an outer SQL statement. These can be used in most places where a table name could be used, especially after the FROM clauses. Since sub-queries can be as complex as any SELECT statement and may contain sub-queries again, the heavy use of sub-queries may result in code that is unreadable.

Here is an example of nested queries (adopted from the SAP HANA SQLSCript Reference):

This can be improved by extracting the sub-query (note: the same sub-query is used twice here).

The extraction of sub-queries will result in more comprehensive programs: Using descriptive names for the table variables increases the readability of the code a lot, since it documents the intention of the sub-query. Thus, it would be good to have automatic checks to avoid such complex SQL statements. To cover this demand, we have derived checks to identify

Let me explain these checks in more detail:

Since there is hardly any benefit to extract very simple SELECT sub-queries (e.g. selecting rows from a table only), a check which reports any sub-query is not very useful in practice. Only non-trivial sub-queries should be regarded as finding. Thus it is required to distinguish between trivial and non-trivial sub-queries. For now we applied the following definition: Non-trivial queries are either nested or contain any of the following clauses: WHERE, JOIN, GROUP BY, HAVING or UNION. Otherwise the sub-query is regraded as trivial.

Sub-queries may recursively contain sub-queries, which make the code even harder to understand. Thus I’ve added a separate check to identify deeply nested sub-queries. The nesting depth level is configurable. In contrast to the check for non-trivial queries (which already covers nested queries) this checks allows explicitly identifying deeply nested queries, which can be reported with higher severity (e.g. red instead of yellow).

These checks will lead to findings as in the following image: 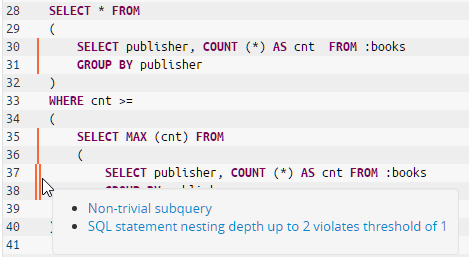 Further we apply our standard analyses which we already use for ABAP also to SQLScript, e.g.

For now, we are still evaluating the practical use of these checks and probably we’ll and up with even more checks. Hopefully this will help to keep SQLScript code easy to maintain.

We do plan to release a code scanner for SQLScript in an upcoming release very similar to what you are describing here.

Hi Rich, good to hear that our thoughts on code quality seem to match.

We are on SPS12, do we get the Code Scanner built-in with this release?
If yes, is there a documentation on this code scanner?