The co-innovation Industry 4.0 showcase between SAP and SIA in China

Industry 4.0 is a very hot topic in China just like in Germany. Encouraged by government, more and more China enterprises are using the Industry 4.0 approach to realize their business transformation.

At the end of 2014, SAP Labs China signed a collaboration agreement with China Academy of Sciences Shenyang Institute of Automation (SIA in short), which is the leading institute in the area of robotics and industrial control technology in China, to set up a pilot production line to showcase the characteristics of Industry 4.0 based on innovations in both hardware and software side technology. This highly regarded collaboration by the government leaders Chinese President Xi Jinping and the German chancellor Angela Merkel.

The production line assembles a toy car. The operations on the line includes the assembly of the components, shape scanning, customized polishing, visual inspection and more. It simulates the whole process from the customer order to production based on the configuration of an individual customer. The production line consists of 7 workstations, 5 industrial robots, 2 AGVs, 3 visual monitoring components, about 200 sensors and about 100 wireless modules. 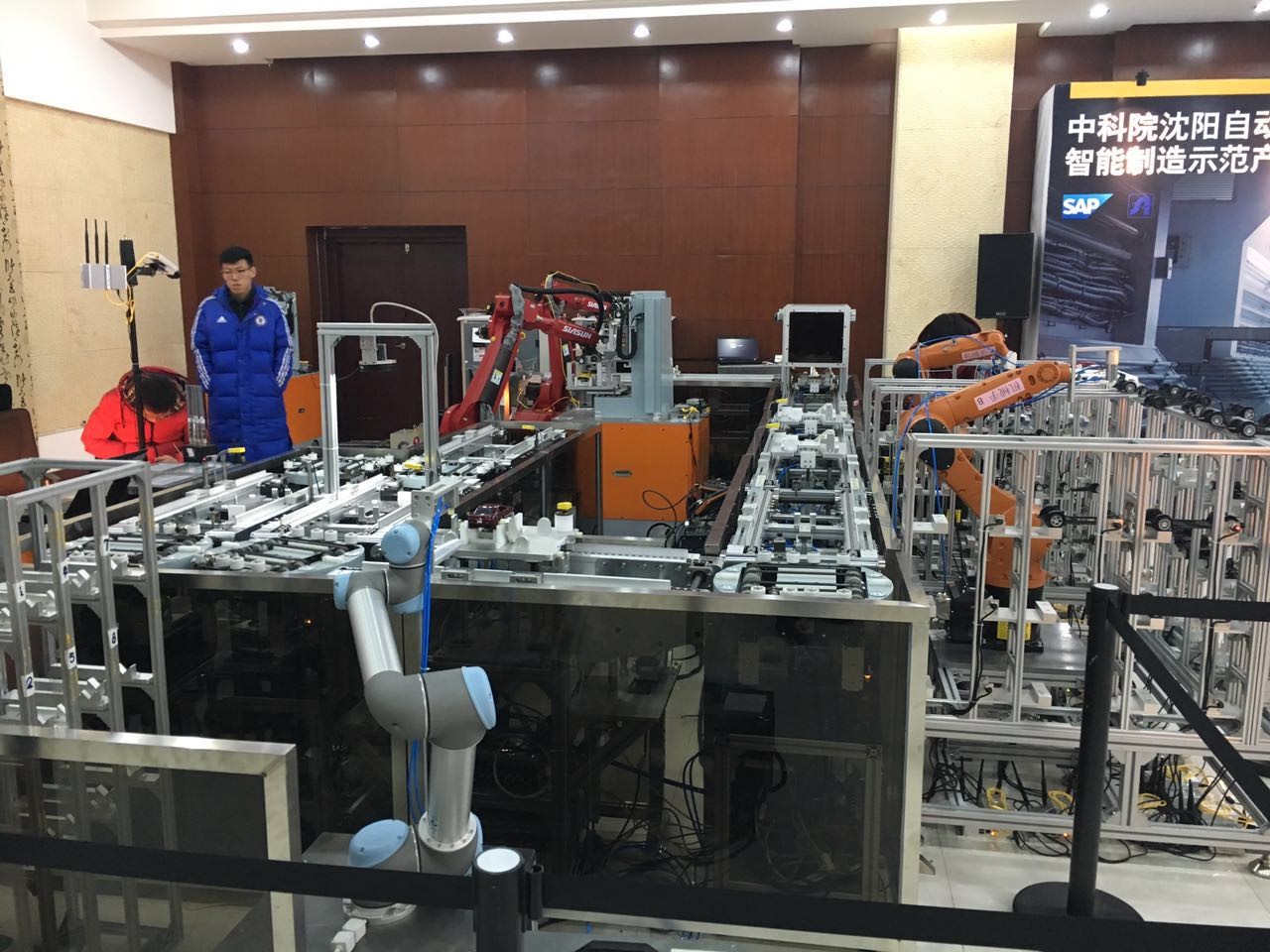 Photo shows the setup of the production line at SIA Labs in Shenyang, China

The customer accesses the e-commerce platform of SAP Hybris to configure his toy car by choosing color and type and then places his order. The sales order is synchronized with the SAP ERP system to do production preparation and scheduling. The production order is released to SAP Manufacturing Execution Suite (MES). The MES system connects with machine. All the information required from the order and the product is sent to the machine. The product contains an RFID chip which allows it to communicate with each machine at each work station with instructions on how process it such as which components are to be assembled. The customized toy car is produced quickly. Throughout the production process, all of the related production information, such as machine status, production progress, and order fulfillment, is shown on the dashboard in shop floor.

The polishing work stations are not installed on the line but are available as automated guide vehicles (AGV). They connect with the smart controller through the WIA-FA wireless technology. Thus, the sequence and equipment on the production line can be adjusted dynamically based on the load. For example, when the number of orders increases significantly, the smart controller can predict a production bottleneck because it monitors the status of work stations. In the case of a bottleneck, it search available backup work stations, and trigger the work station to join the production system to share the production task. The AGV enables the polishing equipment to move automatically to the position on the line where it is needed. Once the peak passed, in order to save energy, the controller triggers the backup station to leave the production line and return to backup area.

We also installed sensors on machines and robots to measure the temperature and vibration. SAP’s Predictive Maintenance Solution (PdMS) receives this information directly from the machines via the WIA-FA wireless network and HANA Cloud Platform. The SAP software monitors the real-time situation of the machines and analyzes the status the machine or robot. When it identifies an abnormal status or predicts that the machine could have a malfunction in the near future, it sends a signal to the controller. The controller checks whether there is a backup work station available and trigger it to move to join the production near the identified machine. At the same time, the identified machine will stop production. Through the integration with SAP ERP, the SAP Predictive Maintenance solution can trigger a service order which will be directly sent to the mobile device of the assigned technical engineer. The engineer can check the related information of the identified machine, the needed components, and even the 3D work instructions, all on a mobile device. When the machine has been serviced it will go back online in the production line under the control of the controller.

Summary: The technology innovations showcased in this production line can realize mass customized production quickly. At the same time, the flexibility and capacity of the production line is enhanced by the intelligence to dynamically adjust the system structure for increased production optimization. In addition, predictive maintenance software helps reduce the downtime of machine and increase the overall efficiency.

We hope this showcase we built and the technology we used can help the Chinese manufacturers and give them some inspiration on the way to explore the smart manufacturing solution which is suitable for current Chinese situation, as well as support enterprise digital transformation.

This showcase will set up in SIA Labs until mid of 2017, in Shenyang, China. It is open all of our customers and partners to visit.