SAP PLM Recipe Development – How to do integrated Status and Change Management?

This blog belongs to a series of blogs regrouped on the SCN page “SAP PLM Recipe Development for Beginners”.

PLM stands for Product Lifecycle Management. The lifecycle of a product is usually its design > creation > launch > optimization > obsolescence. These phases somehow have to be managed in the SAP system, for example with corresponding system statuses.

So the question arises: “How can you manage the lifecycle of a product, across all objects, with SAP Recipe Development? What are the system capabilities? What are the options?“

Before we can answer this question, we should first take a look at the most relevant objects that SAP Recipe Development is dealing with. Those are:

Let’s now take a closer look at those objects one by one. Let’s try to understand how the lifecycle can be managed individually on each of those objects.

In the SAP Material Master is a field “X-plant material status”. This field is often used to manage the lifecycle of the material also in the context of SAP RD. 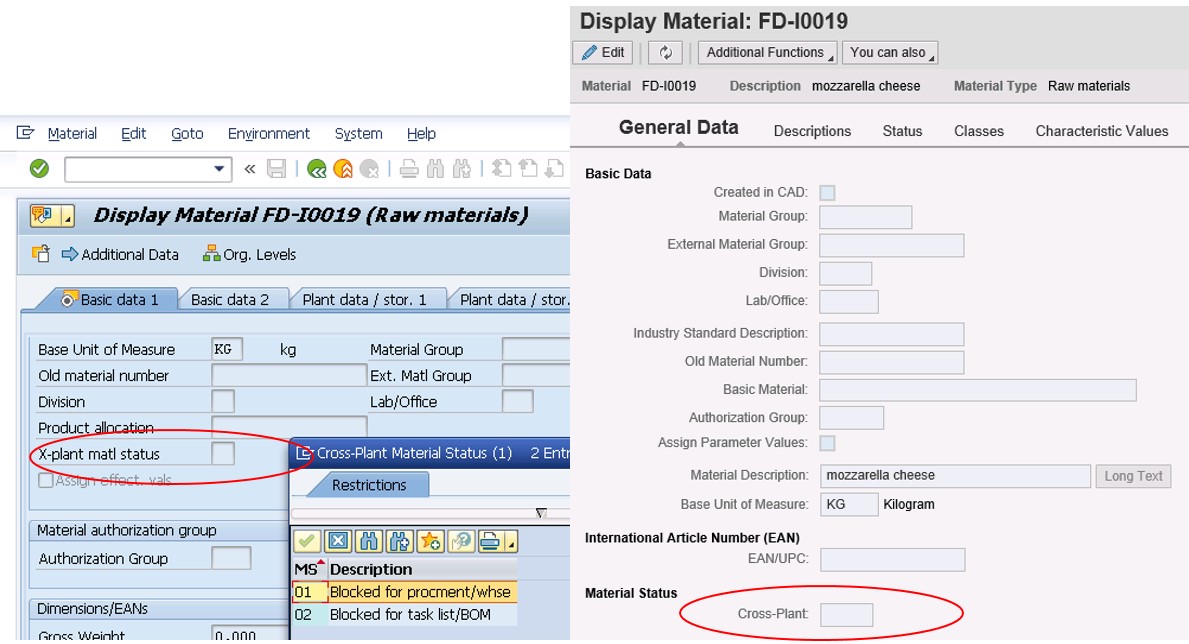 As far as the specification is concerned here we have several possible ways of managing the lifecycle:

If you want to keep it simple and if all you need is an indicator if your specification is “in creation” or “released” you might consider using an additional identifier for this purpose. It is simple but there is no control mechanism whatsoever on the specification and its usage.

If you are working with different ratings, usages, regions, … the EHS Specification Status might be exactly what you need. This status does not only allow to control the behavior of the specification (“editable” when “in process” and “non editable” when “released”) but is also integrated with SAP ECN (Engineering Change Numbers). This allows you to manage the time span when a certain status is valid. 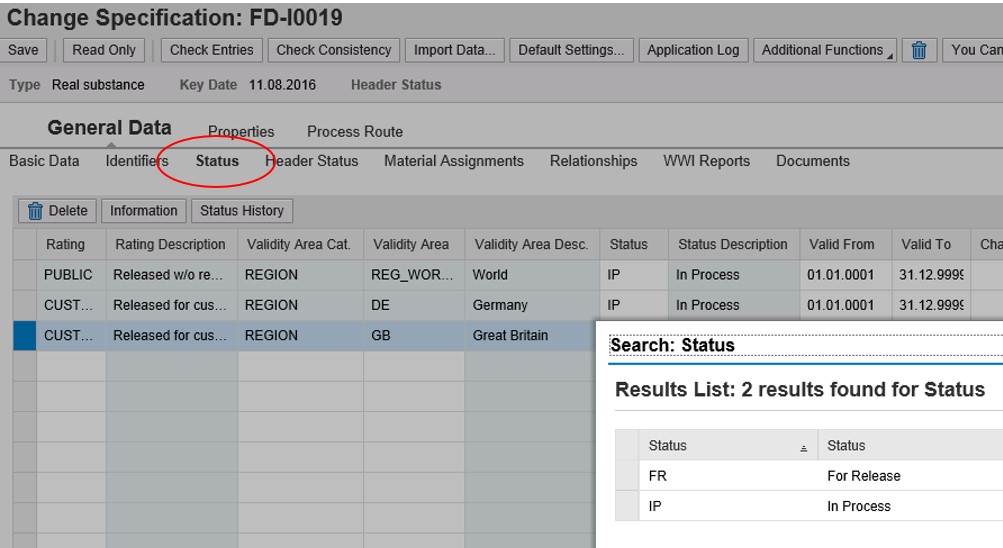 If you are mainly concerned that the specification status works seamlessly in conjunction with the recipe, you might be in favor of using the Specification Header Status. This status does not only dispose of status network which is based on the same configuration and integration logic the status of the recipe but also allows to make use of so called “attributes”.

Those attributes do not only allow to manage the behavior of the specification itself (e.g. editable or not editable) but also its usage in other objects (e.g. a specification on status “obsolete” cannot be used as a new input item in a recipe). 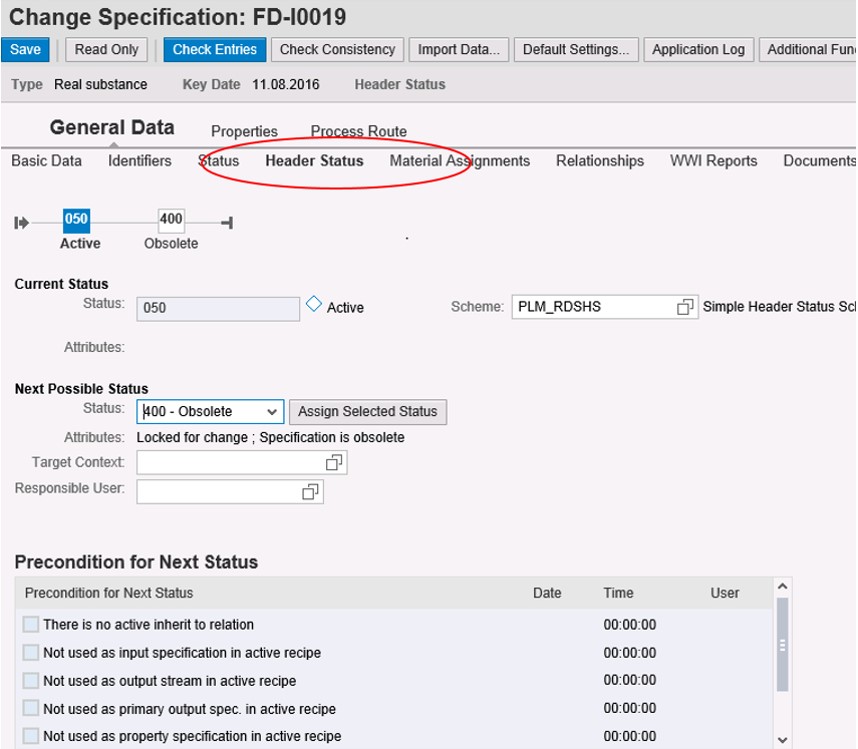 When you create a recipe you quickly find out that the recipe does not have an own independent number range. Instead, the recipe number is composed of:

So, in addition to the recipe status, which allows to manage the behavior of the recipe (editable, non-editable) and also allows to trigger so called recipe consistency checks, the recipe.

Optionally, you can also enable the use of change number for recipes of a specific recipe type in SPRO (ECN for Recipes).

The Bill of material also has a status and also allows the use of Engineering Change Numbers (ECN). When a Recipe is synchronized via the GSS-tool (GSS Recipe to BOM Synchronization) it is mandatory to use an ECN for this synchronization.

The Engineering Record (SAP component PLM-WUI-OBJ-ECR) is an additional, optional object which allows to group several other objects in one ECR. The ECR is an umbrella which can contain several specifications, recipes, materials,… which are all related to the same product development project.

Without ECR, the product development project manager would probably list all objects (specifications, recipes, …) in one excel sheet. This excel sheet would be updated by his team members, a status per item would be tracked and they would send the excel file back and forth by email. Finally, after the successful ending of the project, they might try to save the excel file in a non-editable format (e.g. pdf file) and archive it somewhere. That is in short the function of the ECR. 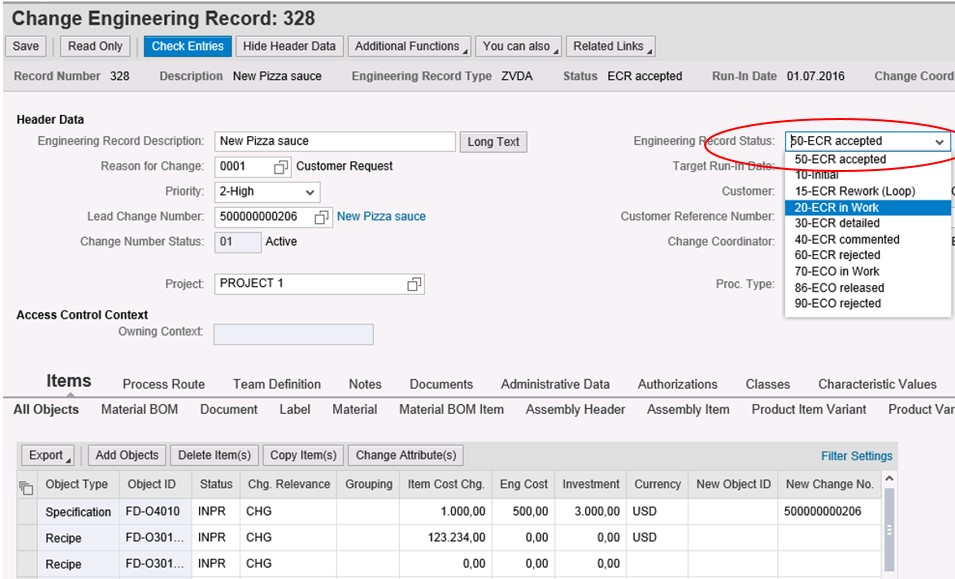 Lifecycle integration across all objects

There is no golden path, no right or wrong! What is needed is a thorough evaluation of the pros and cons of each of the above listed options.

Therefore, in every SAP Recipe Development implementation you have to ask yourself:

After those questions have been clarified, you will be a step closer to an integrated product lifecycle management for your SAP Recipe Development solution. And, you might also want to start thinking about Recipe Development mass change scenarios.

We are currently loading recipes to SAP using a custom ABAP program.

Once the Recipe reaches to Released State we can not change or delete it.

Is there any way that i can delete the Recipe  RECIPE/001/000 which is already in released state?

Please suggest. This will help me alot.