Let me start by syaing that Africa Code Week was one of the best experience, sponsored by SAP, that I had the privilege to participate. It was a remarkable trip all way from Montreal to Cape Town. More than 25 hours to reach my final destination, but every minute was worth it. 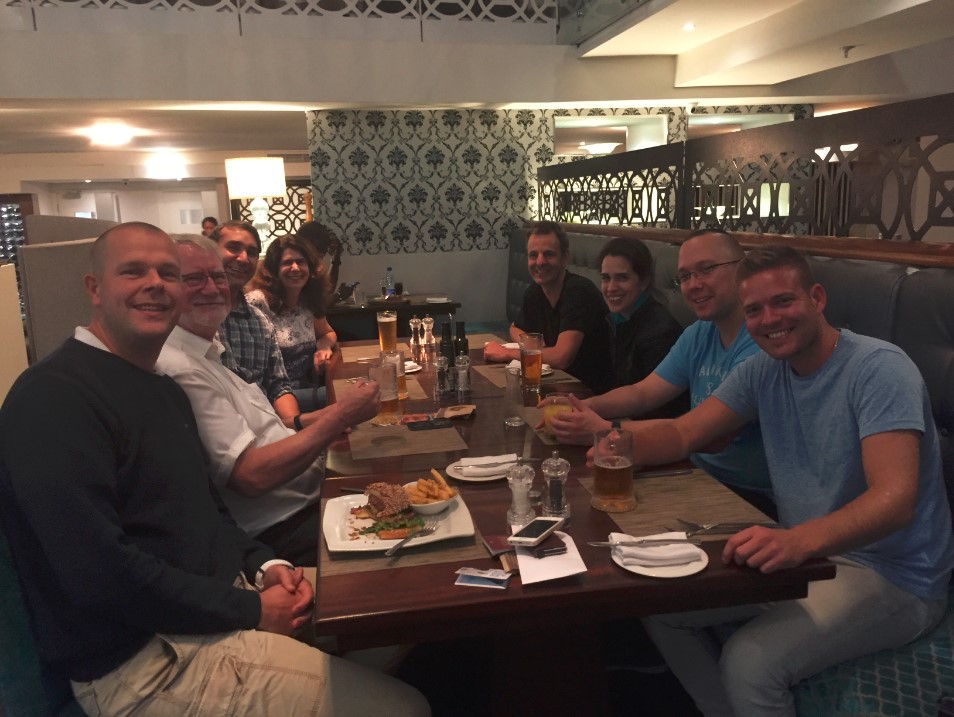 I started my journei on Monday, July 18, evening. My itinerary was Montreal, Amsterdam, and Cape Town. During my second flight from Amsterdam to Cape Town, I had the opportunity to meet part of the crew who was participating in this initiative. In the same flight was I, Marc Tiggeler, Gergely Kezdy, Gunner Thomassen and Kathryn Duval. I and the other people had a long and interesting conversation in the airplane and I could notice that the excitement was literally in the air. Actually, it was a mix of excitement and apprehension, as we did not know exactly what to expect and how to classes would look like.

I was still feeling the jetlag from the previous day when I woke up on Wednesday. It was our official first day in South Africa and I was looking forward to our initial meeting with the Science Centre folks who would answer all our questions. I headed to Waterfront to have some food and look around the beautiful Cape Town. Then I was on my way to the Cape Town Science Centre. 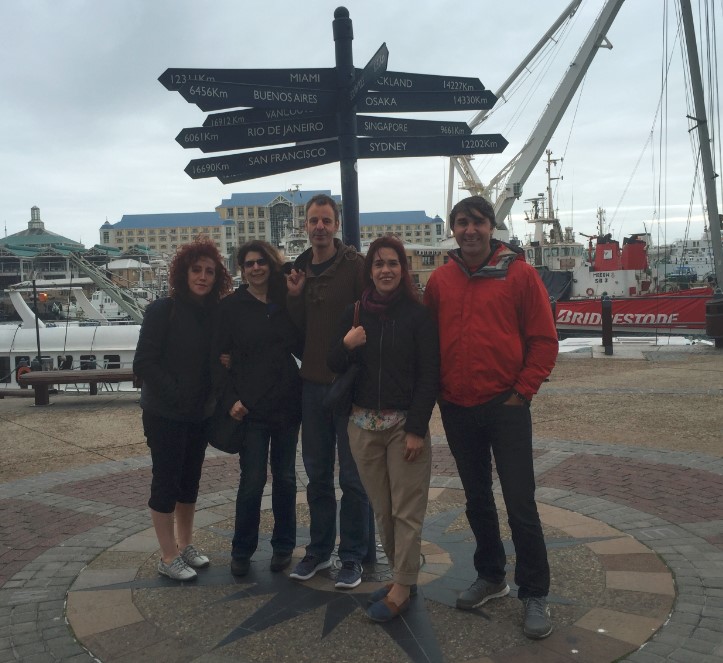 At the Centre, the local trainers answered all our questions and we had our groups allocated. For the next 3 days, I was allocated to Calen’s team, together with Mario Fetzner and Lea Dvir. We quickly created a bound and we were very happy to work together and help the kids in Cape Town. I could see that the local trainers, Bafo, Okuhle, Calen and Luvo were excited to have us around. They were extremelly friendly and they quickly became part of the SAP family! 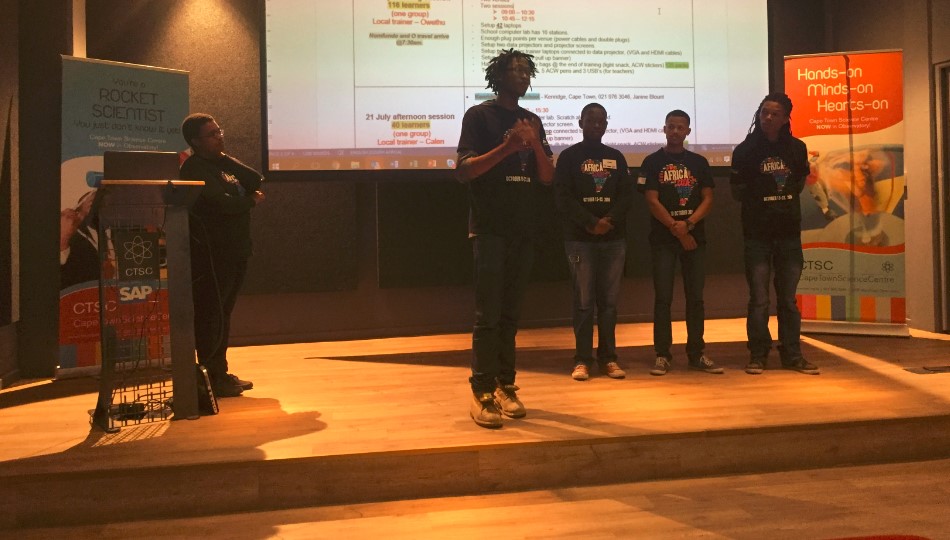 Our day started early, 6am I was up and preparing myself for a long day. We had a quick breakfast at the hotel and our driver came by to pick us up. At the Science Centre, everybody was helping pack the laptops, putting all necessary kits inside the vans and we were in our way to the first school in Simons Town. Our trip to the school took us around 45 minutes and we had the opportunity to see the city a little bit more.

As soon as we arrive in the first school, the principal came and gave us devastating news. The night before the entire school’s network went down and the school’s computers were inaccessible. Initially we did not know what to do as we were ready and prepared to stay in that school the entire morning. Calen, the local trainer, called the Science Centre and we were requested to join the other three groups in a different school. We were on the road again for another 45 minutes’ drive from Simons Town to Cape Town. 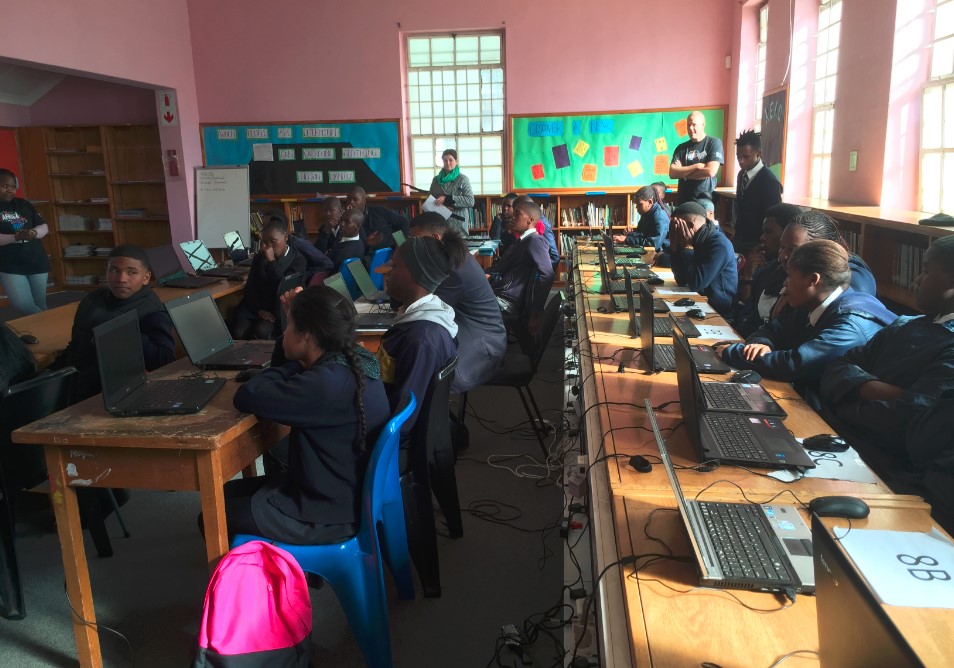 We arrived at the second school without knowing what to do. Lea, Mario and I were separated and we entered in different classes to help our colleagues. As soon as I entered my class, I could see how concentrated and happy the kids were. They were already creating their own drawings that will soon get life by Scratch. All of them were creative and interested to have their draw perfect. I was amazed to see how easy it was to deal with these kids. The interest they were showing was remarkable.

At the break time, we saw some kids playing soccer at the school. Marc and Mario had the great idea of buying a new soccer ball to the kids, and we asked our driver, Roger, to go to a shop nearby and buy a couple of balls.

In the second session, I was helping in a different classroom alongside Okhule, Marc and Mario. Since this session was delivered to older kids, the interest was not as high as the first class. Still, the teenagers were doing their best, some of them approached us after the session asking additional questions about Scratch and how they could practice after the course was done. 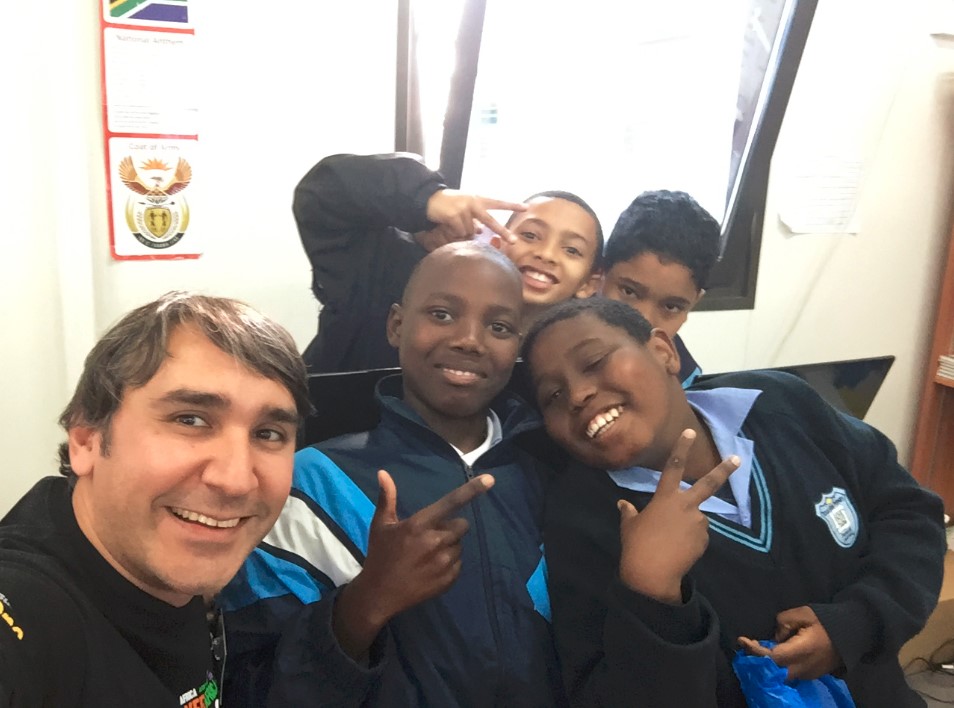 We did not know, but the school’s principal had prepared a nice surprise for the group. He gathered the entire SAP and local trainers in a classroom and had some local kids playing their instruments for us. AMAZING! The kids were really gifted. I believe everybody from our side felt especial about that moment.

After lunch we headed to the last school of the day and helped Ibrahim delivering a more advanced Scratch session. Now the school was located in a nicer neighborhood and the kids were extremelly polite to us. When they heard that people from all over the world had come to teach them Scratch, we could see their excitement. The class went smooth and the kids were engaged during the entire activity. After that we returned to the Science Centre to provide some feedback from our side and share our experience. 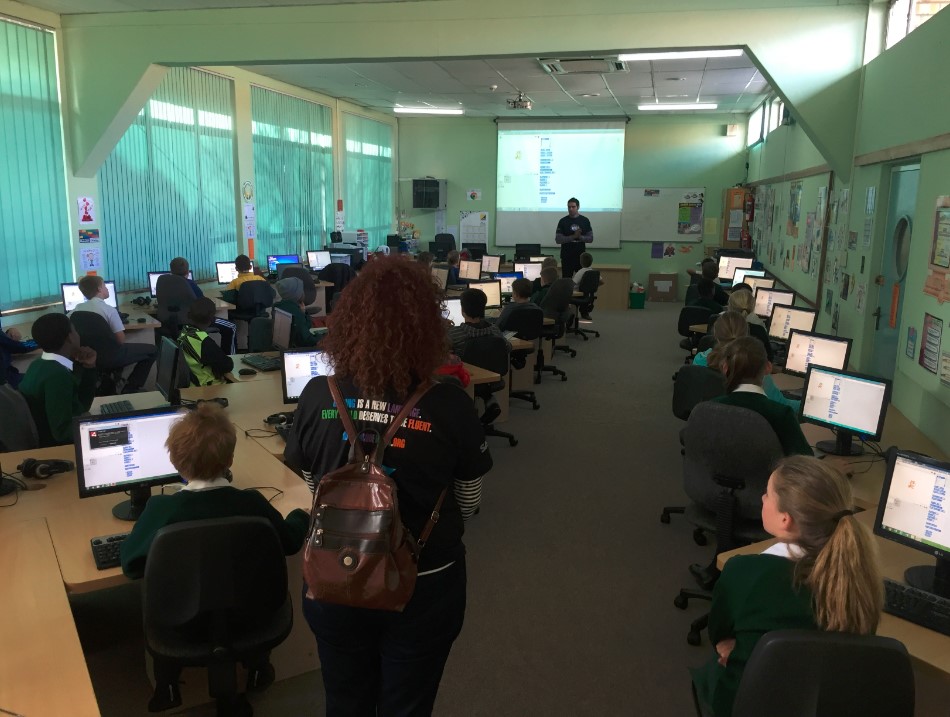 I could see how happy everybody was! We were looking forward for the next day!

Friday started as early as Thursday. We had a quick breakfast at the hotel and we went to the Science Centre to pack all the laptops. We learned that our day would be shorter than the previous one, as the afternoon sessions were not happening. 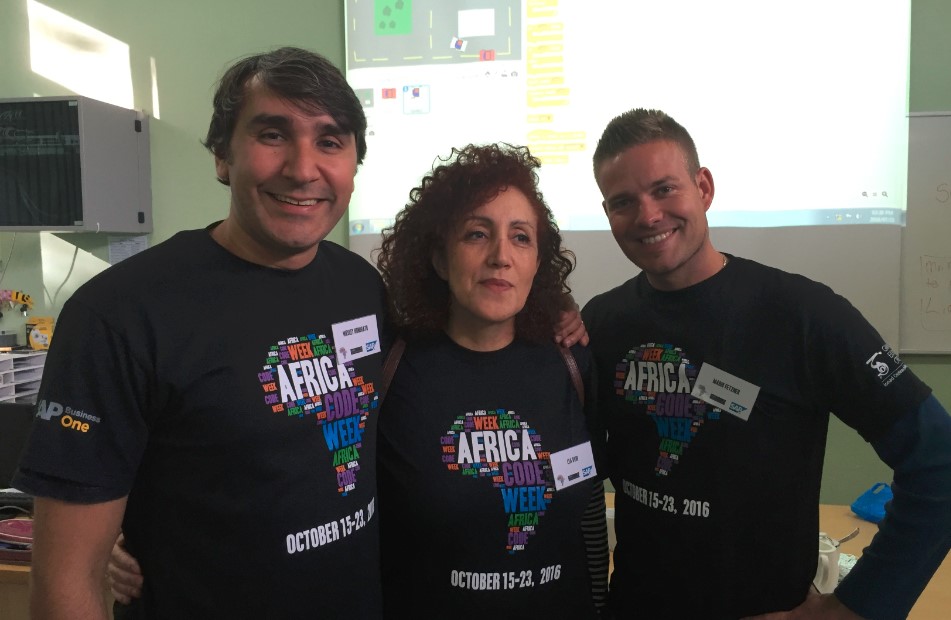 As soon as we arrived at the school, we quickly started unpacking the laptops and setting up the classroom. Lea had offered to deliver the first session, but Calen asked her to deliver the second session. All students were amazed to hear we had come from different places just to teach them Scratch. They felt really especial (an they were especial)!

Lea delivered the second session! She did agreat job and all the kids were following along. Mario and I were walking around ensuring that all kids understood the logic behind the class. Again, the kid’s creativity was beyond my imagination. Some of them had genuine artistic skills and talent to be great artists and programmers.

Saturday was our last day in this amazing initiative, and I was looking forward to help teachers learn about Scratch and hopefully have them putting in practice in the near future.

We arrived at the Science Centre saturday morning, around 8:30am local time. The computers were already in place and we just ensured scratch was properly installed and running. At 9am, we had our first group of teachers and the class where I was allocated was completely packed. I was getting ready and excited to deliver the second class that day. After 2 days of scratch courses, I was more than ready to have my debut.

The second session was mine to take! Again, all seats were taken and I was ready to facilitate that training. The teachers were all excited to learn this new tool and they were engaged in the learning process. They were willing to contribute and provide their insight along the way. Gunner, Lea and Neeraj were in the class with me, going around and helping the participants in any obstacle that might have arisen. 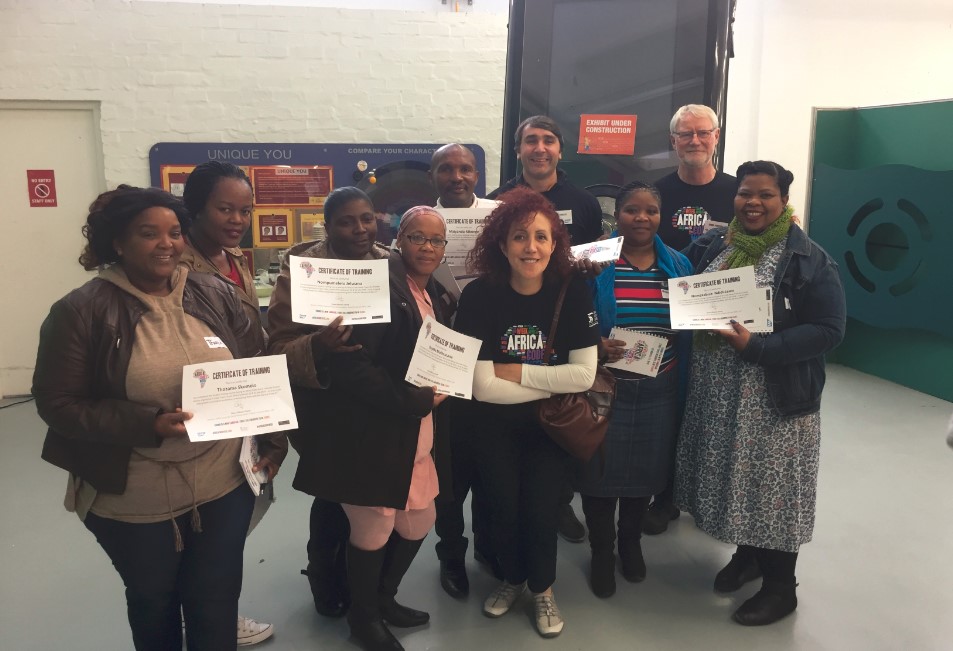 The class was very nice and the teachers left the room with smiles on their faces. We were requested by the the teachers to take pictures with them, which was super cool. After the class, they came to us and thanked us for the time spent and the knowledge shared. Some of them were already planning to use Scratch in their own classes. It was indeed remarkable to know we are going to make a difference in someone’s life.

As I said initially, it was one of the greatest opportunities SAP has given me, and I am very happy to have participated and helped kids and teachers on their journey to learn.