In this short blog I will use the most primitive example to show you the way from joins in ABAP Open SQL to associations in ABAP CDS.

The aim of the blog is not to show you something you should do but to gain a basic understanding of associations in CDS views.

I will start with the following very simple INNER JOIN between database tables SPFLI and SCARR from the good ol’ flight model in Open SQL in the ABAP Editor (either WB or ADT in Eclipse):

Nothing special about that and the result shown with CL_DEMO_OUTPUT looks as follows: 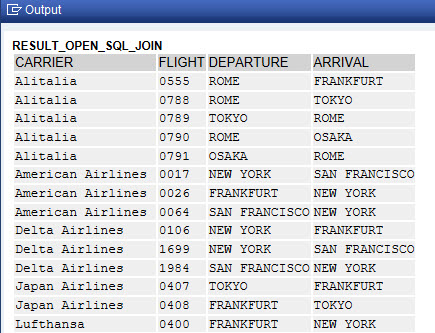 Now let’s transform the above ABAP code into the DDL of an ABAP CDS view in the DDL source code editor of ADT in Eclipse:

This can almost be done by copy and paste. Hey, it’s (almost standard) SQL for both.

After activating this view you can use the data preview of ADT (F8) or acces it with Open SQL:

It is not too surprising that result_cds_join and result_open_sql_join contain exactly the same data.

Finally, I will use the advanced modelling capabilty of ABAP CDS and transform the explicit join into an association of another view:

The association _scarr is declared once behind the keyword association and can be used at several places inside the view in path expressions. You can also publish it for usage in other views or in Open SQL, but I have not done that here.

For our simple example, I use the path expression _scarr[inner].carrname as the first element of the select list. When using a path expression, the associations listed there are internally transformed to joins. In the select list those joins are left outer joins by default. Therefore, I override the default with [inner] in order to enforce an inner join. You can check the result by displaying the SQL DDL (shown for HANA here) that is generated from the ABAP CDS DDL in ADT (Context menu Show SQL CREATE statement):

You see, we end up with something well known.

And of course, the data preview of ADT (F8) or the following Open SQL retrieve again the same data as before:

With other words, no exceptions from

The aim of this simple example is to show you that CDS associations are nothing but specifications of joins in a central position. These joins are instantiated in native SQL when using associations in path expressions.

Horst, I was just going to suggest to add a bit more introduction (like why would anyone want to do this). Based on a quick Google search, it seems you've missed the opportunity to pimp your other related blogs:

SAP's next generation ABAP applications as S/4 HANA will be built on 10000s of CDS views interconnected by associations. Sometime in the future you will have to deal with those in custom code and then it might be good to know that it is all about joins.

My dream: that would be so good if CDS views with associations could be provided by SAP in the classic non-S/4 HANA systems! (they could be used by customers as a technical data model, it would be much easier to find the relationships between tables, much better than the old foreign keys and EDM)

Yep, that's the idea. While semantical properties of database tables as foreign key relationships  never had any technical meaning in ABAP (only in dynpros), the modelling capabilities of CDS do have real effects.

You can also navigate the public associations in the Data Preview in ADT (ABAP in Eclipse). See Data Preview on ABAP CDS in AiE .

I have question.  I created one view and included for e.g.  10 fields in projection list (ZCDS1).  Now I want to create other cds view(ZCDS2)   using  ZCDS1 and sap table1 using join or association  .   I want to use all the fields of ZCDS1 + new table two fields.

Every time I have to add all 10 fields in projection list  from zcds1 manually .   Is there any way to select all the fields without typing all the fields of ZCDS1  field list ?

Because if I add new filed in ZCDS1  I have to again change in ZCDs2.

Can you give an example, in which one association relieving you from the task of coding complex join expressions.

Why association  is more convenient then join?

Associations model relations between entities. Once modelled, the user can use path expression to naturally follow such relations, e.g. Open SQL:

Here, two associations of two views are used in one path expression.

hanks, Horst.
Now I understood the main advantage associations over the joins.
This is path expressions.

Hello Horst and everyone,

Thank you for this great blog, at first. Very useful and helpful .

I got stuck somewhere and trying to find the answer of the questions that makes my mind busy for a while. I guess, association doesn't have all the features join have or it has some other use cases than complex joins.

When I try to make 2 or more associations and use the fields in the first associated view to join the new associations, things start to get mixed. Better to give an example;

Actually, my goal is also associating SPLANE table on the field _scplan-planetype. But it doesn't let to use this field. 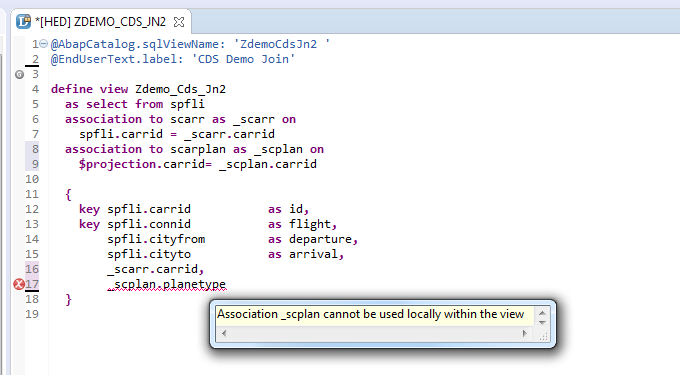 What does the "Association _scplan cannot be used locally within the view" error mean? So, that means we can use association only for spesific scenarios? For navigating with Odata etc? But for complex scenarios, it looks like join has more features.

Thank you very much for all your cooperation,

As I see when we use the base datasource table (here spfli) it works ok. Actually what i need is to use an associated view (let's say _scarr) in another association and use the fields of the final associated table in my cds view.

When i use traditional join, it looks ok. But my main goal is to create an analytical model with associations. To do this, i guess i need to understand the association concept first. 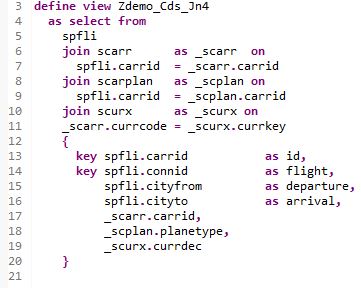 I was facing the same issue, but field required for the on condition(BSEG-LIFNR) for the second association is not available in the initial data source BKPF for me. 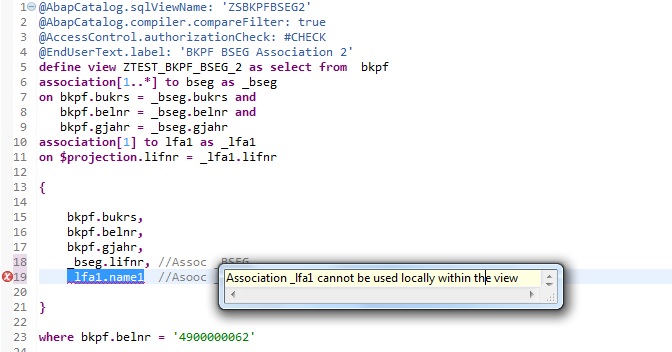 But I have no other option here as LIFNR is not available here in BKPF, else I would have used it from there.

I was able to resolve this issue by changing the tables, and making BSEG as my first table.Wanted to check if we can activate the CDS view without changing the order of the tables?

If I remove the path expression _lfa1.name and replace it with _lfa1 so that it is exposed to consumption by other views, then the error goes but we get two warnings. 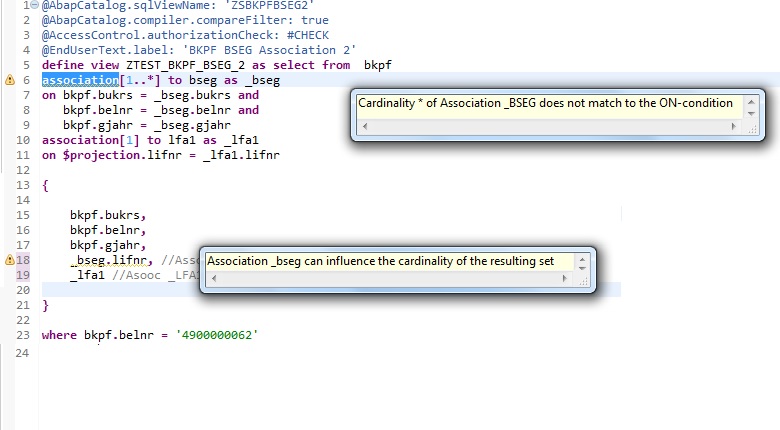 Could you please comment on the warnings as well. Thanks for your help!

I'm desperately searching for a possibility, to build and fill a table mesh straight away from my CDS view incorporating the associations.

With of course some additional calculation in between

As now based on this path structure, I'd like to create an ABAP report

Unfortunately (as of now) I can't find anything?

Any help would be appreciated

"I’m desperately searching for a possibility, to build and fill a table mesh straight away from my CDS view incorporating the associations."

Then let's hope and pray 😉

But now I have another issue with Associations compared to Joins...

Sure when going to the preview, it calculates based on the WHOLE consumption...

Now when I select the data via ABAP and add a where condition which "filters" the consumption data, this restriction is not considered by the SUM function on the view!

But when I write a simple JOIN between B_MAT and B_CONS again only joined via WERKS and MATNR grouped and summarized, the SUM is based on my where condition on B_CONS

Same if i select from the VIEW and calculate the SUM within my select query, again it calculates properly!

So only the VIEW itself is not considering my where restriction to the association!?

and i used this association view in my program like below.

but i'm getting the sytax error like  "The association "_BOOKINGS" could not be resolved." 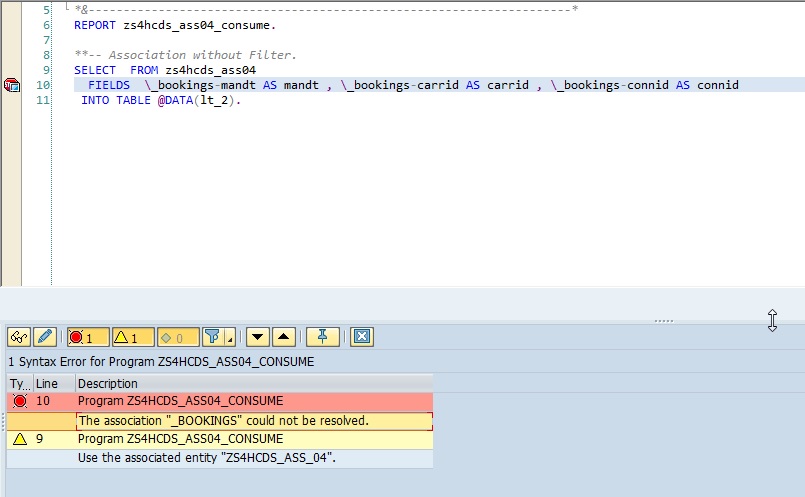 Horst Keller, is it possible for you to check where we are making a mistake

For example my test view as follows

And the ABAP code to consume it as follows

And the error message I got is

The association "_CURRENCY" could not be resolved.

How does this fit into the VDM? The resulting CDS view does not really describe a single entity, so it is not a basic interface view. However, composite interface views shouldn't access database tables directly.

My current understanding of CDS is that every CDS view should fit into the VDM. What does this mean for your examples? Is this a CDS outside of the VDM that's just used for code push-down? Would that be good practice or bad practice?

I'd appreciate any help, thanks.

Can you please tell me why i’m getting this issue.

Column _vbap.matnr is not contained in the entity selection list 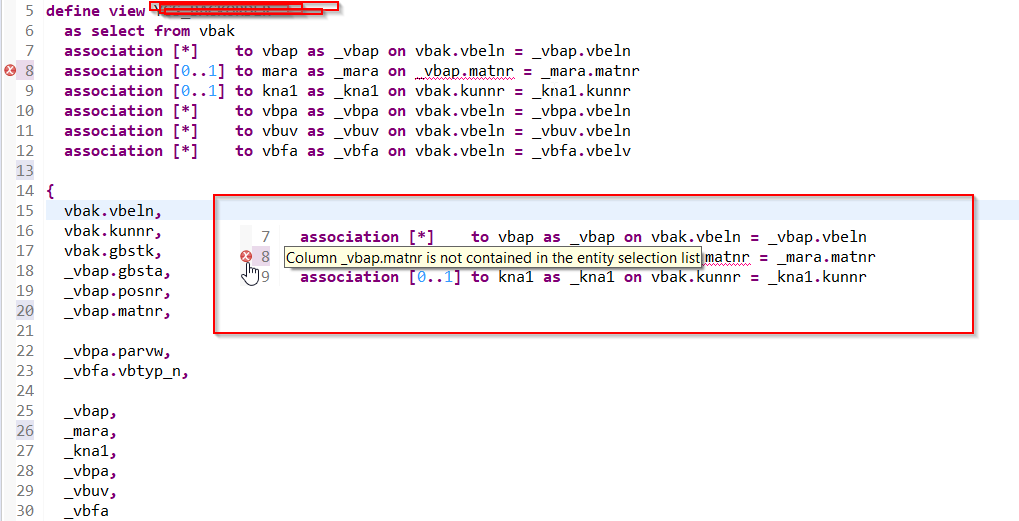